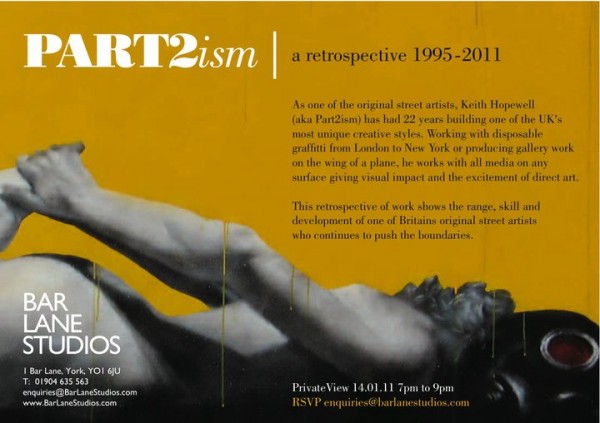 This month sees somewhat of a homecoming for York’s favourite graffiti son, Part2. More recently known as Part2ism and also by his real name of Keith Hopewell, Part2 is one of the original leading lights of spraycan photorealism, which is now seen throughout the graffiti world with the likes of Herakut / Maclaim and whipper-snappers Best | Ever (interviewed) leading the fresh charge. Check the annals of history and it was the likes of Part2 and System of AoC that started bringing truly photorealistic productions to the public domain, inventing their own techniques by modifying spray-tips and cutting up can-caps in order to hone their vision.

Part2ism: A Retrospective 1995-2011 is to be hosted at York’s artist space Bar Lane Studios, and as the title suggests brings a survey of Keith’s work throughout his prolific career as an artist and graffiti writer. Expect examples of early work, when the artist was first developing his style, his angular futurism styled work, through to his defining series of work, Artillery For Pleasure, and right through to his most recent impressionist interventions featuring skulls and skeletons and CMYK pieces, more of which can be seen on Unusualimage’s flickr.  We walked past yesterday, and the installation of large scale works looked impressive through the windows. The retrospective opens on Friday 14th January.

Read a recent interview with Part2 here, and take a look at some more Part2ism images after the jump.

Plane Wing picture by Ian Cox. All other images via Part2ism.