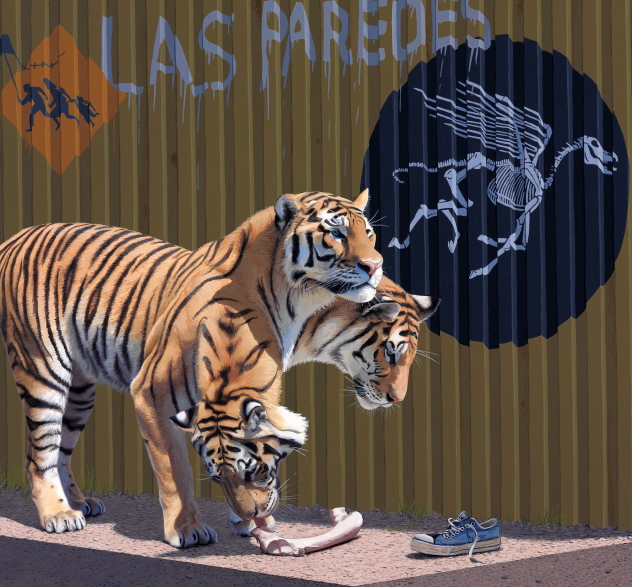 Ever the social activist at heart, Josh Keyes (interviewed) will continue to provoke thought, inspire conversation, and motivate change through his art. Opening Thursday, April 7th, The Magician’s Garden (teased) provides timely commentary on the increasingly pervasive genetic modifications invading our food and ecological systems, among other pertinent political issues of the day (such as border control), through a series of haunting and mythical imagery. Josh talks about the inspiration for this body of work in a recent interview with Fecal Face, stating “the fear is that these genetically engineered plants and organisms will have a devastating and irreversible effect on the natural balance in these living systems.”

Four 30″x40″ paintings will anchor the exhibition at Fecal Face Dot Gallery’s new location (Upper Playground’s old space) in San Francisco, exploring some compositions endemic to early Keyes works, yet executed in a more modern context and with Josh’s acute refinement of lighting, spatial boundaries, and balance within his signature brand of “eco-surrealism”. The show will also be rounded out with 4-6 graphite drawings, a first for the artist who’s sketches are typically quite raw and undefined. A yet to be determined print, perhaps the impressive “The Cerberus Project”, will also be released in conjunction with the gallery towards the conclusion of the exhibit.

Check out a preview of three of the paintings revealed thus far.