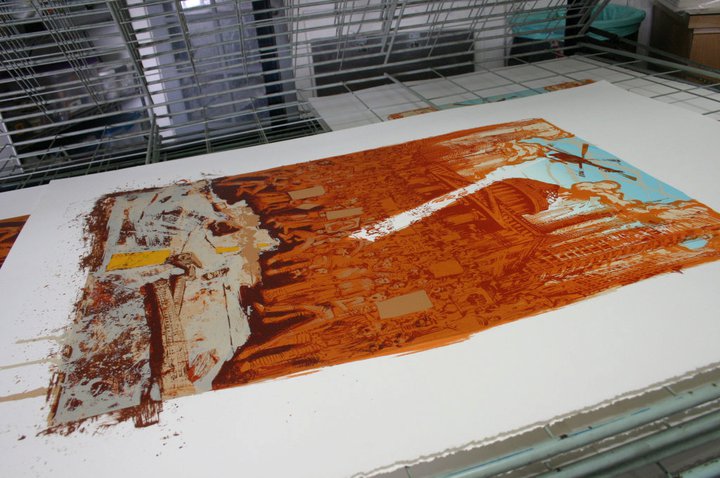 Mear One has just completed a new silk screen with Modern Multiples, to be released this Friday. It will be a hand separated, nine-color serigraph in an edition of 100, available at 1 pm PST through the Baurmann Gallery, who published the print. The subject is striking yet universal: a triumphant scene of victory as a city square is completely overrun by protesters, drawing upon recent protests in the Middle East, Europe, and the U.S. The scene is triumphant and hopeful, as a helicopter beams down on protesters, silhouetted by the blue sky, framed by billowing white cumulous clouds, an atmospheric horizon, and deteriorated buildings.

Mear has had a long standing history with politics, and has created some very controversial work throughout the years. AM sat down with him to talk about his latest print and his upcoming show at the Ace Gallery. Take a look at all at all the questions and answers as well as print images after the jump…

Arrested Motion (AM): Tell me about your new print.

Mear One (MO): My new piece is about global uprising and radical revolution. I’ve been watching the media, reading papers, checking on the internet daily to see what’s going on around the world, and humanity is fed up. I have a city center, with what appears to be a government building collapsing and burning in the background, with a massive protest taking place. From the background to the foreground, I try to describe different pieces of this world that I see that are flawed, decayed, or in need of change. The concept of uprising is a positive one: it’s moving upwards and it suggests growth, like a plant. With the light of oppression shining on the crowd, it’s growing in strength and numbers, and is destined for a positive change.

AM: What was the inspiration behind this new print?

MO: The global situation politically has inspired me to create this piece. What appears to be the falling apart of the western world’s manipulation of the poor, and the eastern world’s dictatorships. I’ve always been inspired by these prophetic times that we’re living in and the complications our world has created. I’m happy and inspired to create work that is in time with our world now. This is the type of work that fulfills me and these are the times that inspire me. I’ve been a political artist most of my life and for some time I felt frustrated through the Bush era with the lack of criticism of the system. This is a highly exciting time to see real things taking place that move society in radical ways. So to see great groups of people rise up and take back from the greedy, selfish systems is really exciting beyond being an artist, as a human. It’s part of the reason why I became a graffiti writer in the first place.

AM: Tell me about your process in making this print.

MO: My process is a combination of more traditional hand-separated layers, and painting techniques I have been developing through my live art. Each layer is hand-painted with acrylic paint on vellum. I use a palette knife with a soft edge and I push paint around and I remove it as I go. I usually have to imagine what the image is going to look like when it’s completed because I’m not working with a computer, and there is no complete image until the silk screen is actually done. Although it’s easier to separate on a computer, I chose to do it by hand because I want a painterly look. I want a human touch. It’s more interesting for me to be challenged with a hand-separated project because the process of exploring without knowing is the same process as to pick up paint and paint a white canvas.

AM: How long have you been working with Modern Multiples?

MO: I did my first print with Modern Multiples in 2001, and it was called, “Getting Away with It.” Richard Duardo published it and it showed a young tagger in Los Angeles hopping over a fence and getting away with it. This process also was all hand-separated, and some of my layers were done in spray paint with additional hand spray-painted embellishments. It’s great to be back in the studio working with Modern Multiples, and we’ll be working on another print release with them again very soon.

AM: What do you have coming up next?

MO: I have an up and coming group show at the Ace Gallery, Beverly Hills on May 6th, 2011. I am working on some large-scale works, which I can’t talk about quite yet because I want them to be a surprise, but they will be engaging the viewer on a transformative level, confronting their human side in a political and philosophical narrative. The show is curated by Bryson Strauss in conjunction with Brit Week LA and Ace Gallery.