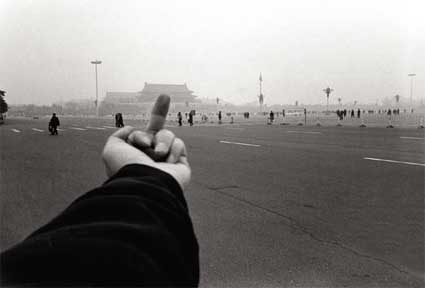 Less than a week after his announcement to set up a studio in Berlin, China’s most well known artist and activist Ai WeiWei has effectively gone missing, with the clock now well past 36 hours without communication and French and German leaders calling for his release. Long an outspoken thorn in the side of the Chinese Government, with the plug being pulled on his massive retrospective by the Chinese gallery for being “too politically sensitive” as the most recent attempt to quell his voice, Mr. Ai was detained by plainclothes officers in Beijing while at the airport en route to Hong Kong. Police proceeded to search his studio in Caochangdi, essentially the last vestige for the creation of art in his home country after the infamous demolition of his new studio by Government officials. The timing of his arrest is arguably more coincidental to than a direct result of his decision to establish a studio in Germany, as there has been a widespread crackdown of activists, dissidents and lawyers who have gone missing as of late. However, his decision to locate a satellite studio in Europe couldn’t come at a better time, as it should provide a sanctuary from censorship and greater freedom of expression.

Pending his release here soon, the artist will hopefully be in attendance as his wonderful bronze Zodiac Heads come to New York City in May, another installation – much like his Sunflower Seeds at Tate Modern – that exemplifies the massive scale and genius scope of his work.

Check out a recent CNN interview after the jump.