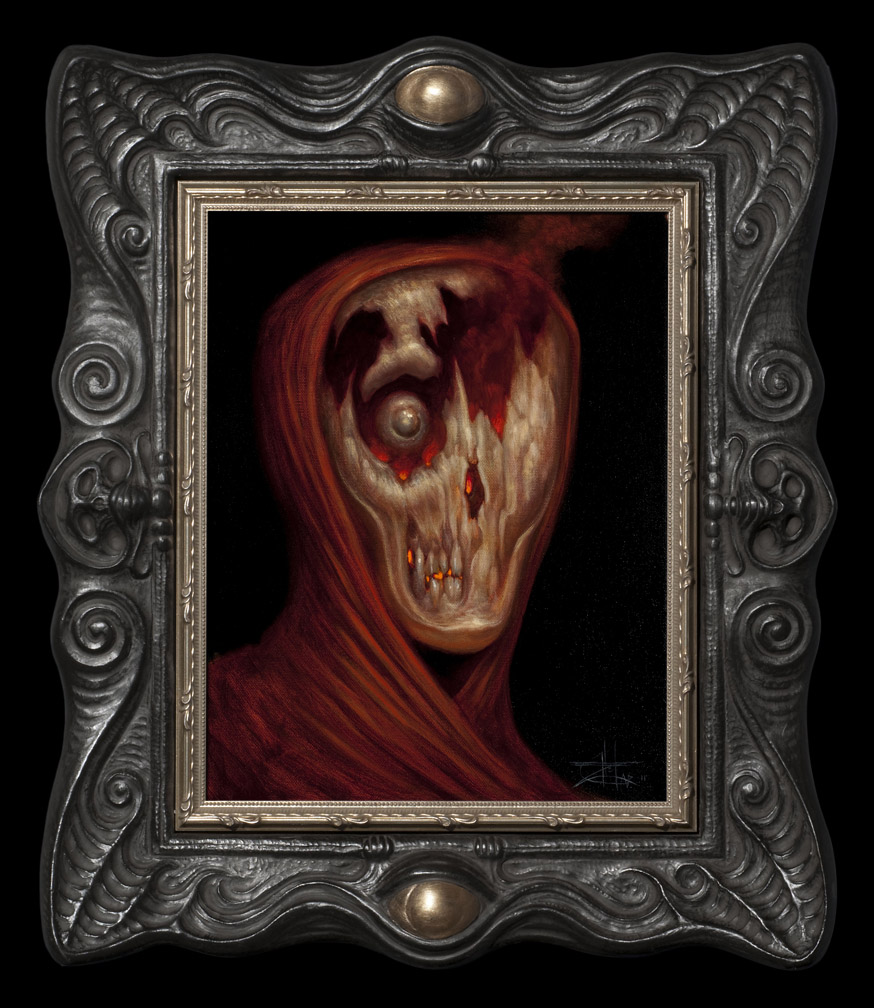 This Friday night (July 22nd) in New York, the LA-based artist Chet Zar will be opening his latest solo show at the Last Rites Gallery. Known as the master of the groteque and macabre, he’ll be bringing a series of portraits of some new characters all presented in custom frames. The title of the show, Faces of Death, is named after a mondo film from 1980.  He talks about this and much more in an interview with AM after the jump… 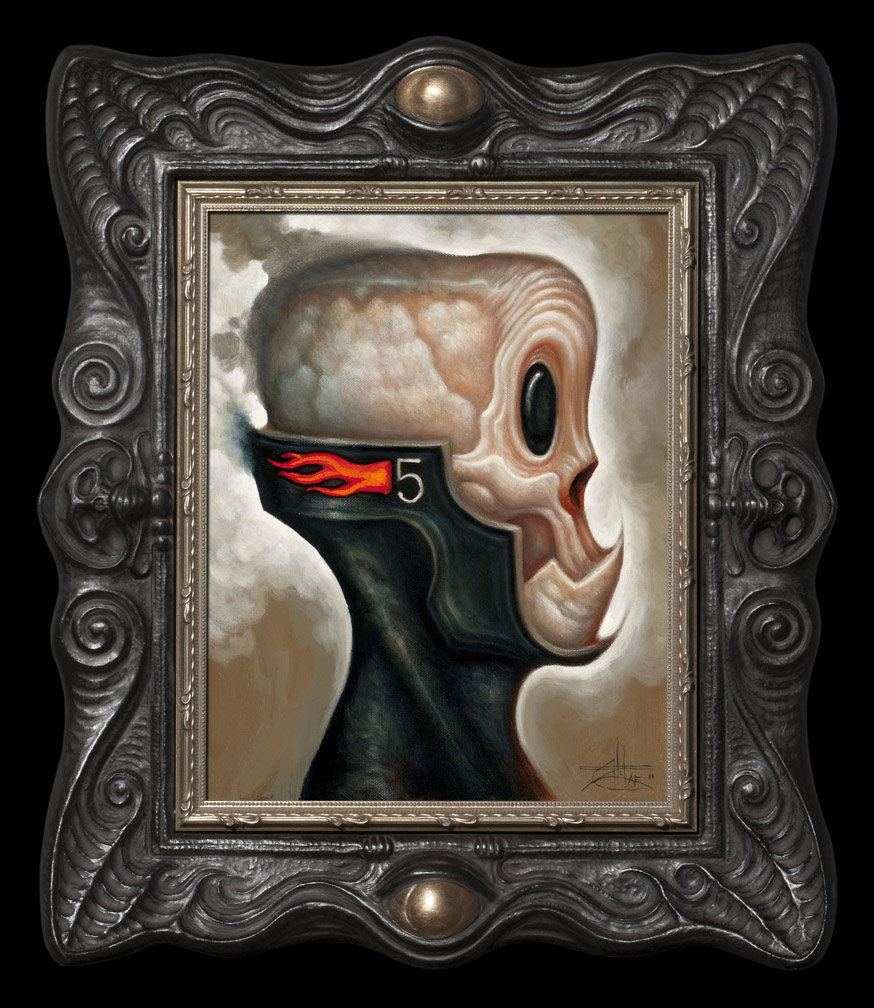 Arrested Motion (AM): Last Rites Gallery seems like perfect place to show your work thematically speaking. What can you tell us about this new body of work – Faces of Death?

Chet Zar (CZ): I love Last Rites Gallery. I consider them my main gallery in NYC. Paul Booth, his crew and his gallery are perfectly suited for me – they specialize in the darker stuff, they are totally professional and completely unpretentious. Really great folks.

With this body of work, I wanted to really focus on new characters. It’s my favorite part of creating my paintings – coming up with interesting characters. In a sense, I am going back to my roots of straight up monster portraits. I also kept them all small (11 x 14″) to keep them affordable. The most exciting aspect in my mind is the custom frames I am making for them. In the past, I have created my own frames by taking existing frames and sculpting small corner pieces to customize them. This time I was able to sculpt a whole frame entirely from scratch, mold that and then cast multiple copies. They really came out beautifully and I couldn’t be happier.

Regarding the title of the show – Faces of Death is the name of a mondo film from 1980 that includes real newsreel footage of people being executed, crime scenes, morgue footage, etc (as it turned out later, much of it was faked). Now, I am not a fan of this sort of thing. I don’t think I ever even watched it all the way through. But, it was very controversial and taboo at the time (before you could easily see this kind of thing on the internet) and it did have an impact on me as a kid. It had a really cheap, creepy, gritty vibe about it. Anyway, I realized in the midst of the painting process that these were all head and shoulder portraits and the focus was on the faces of these characters. The title popped into my head and it seemed appropriate. It was provocative and captured a feeling (to me, at least) that I felt fit the show. 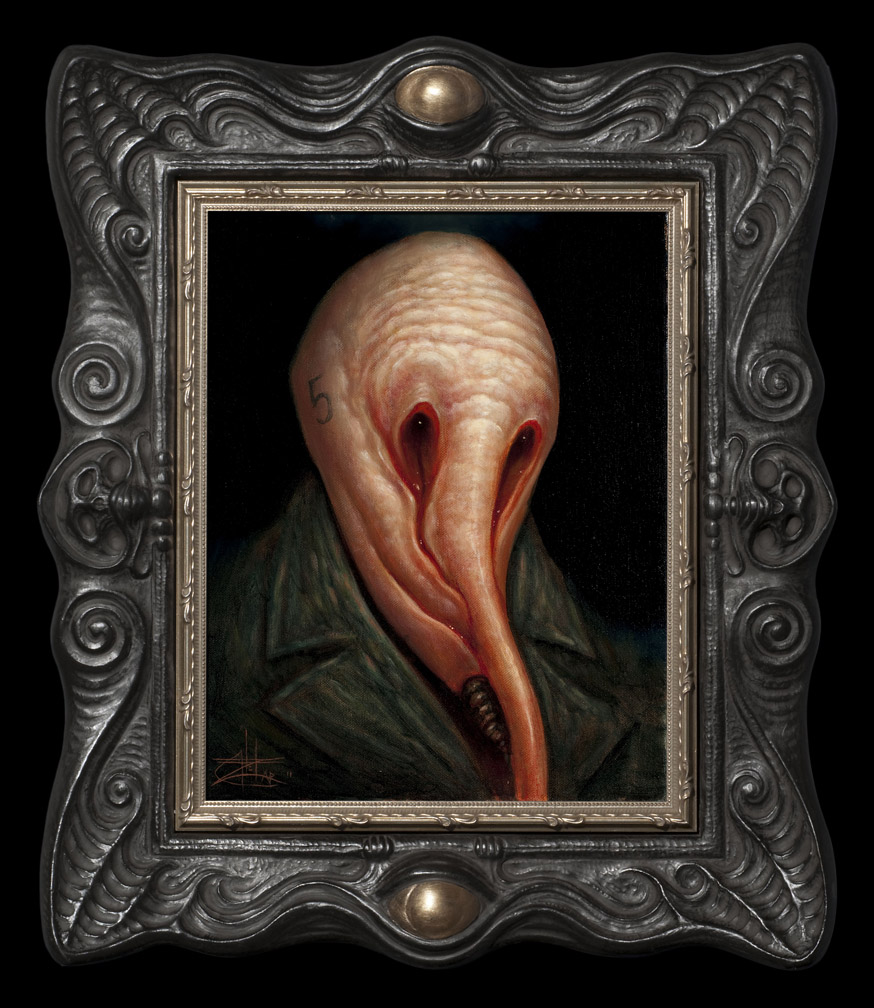 AM: You got your start after high school in the film industry doing make up effects which was seemingly your dream job as you were always a huge fan of horror movies. How did you make the decision and transition to fine art?

CZ: It was really a few things that had come together at the right time that got me thinking about a career as a fine artist. After about 12 or 13 years in the film industry, I really began to become disillusioned with all of the artistic compromise it required. Also around that time, I had gotten some encouraging words from some people I highly respected (horror writer Clive Barker and Tool guitarist/video director Adam Jones) regarding my own personal artistic vision and it really got me thinking about the idea of doing my own thing artistically. Around that same time, I had discovered the work of Beksinski and it really inspired me. I also picked up Mark Ryden’s book, which I thought was just amazing. I showed my wife and she said, “You could do stuff like this!” I told her I had been thinking about becoming a painter and she said if it was something I really wanted to do then I should do it. So I went for it.

AM: What are some of your favorite horror films? Could you see yourself working on your own movie one of these days? Is there anything you would do different than how they have been made before?

I really love the original Night of the Living Dead from 1968. That film really creeped me out as a little kid. The Haunting is another old black and white film from the 60s that really inspired me. I still think it’s scary.

As far as making my own film goes, I definitely have a fantasy about that. I started making films when I was 9 or 10 years old. In fact, that is one of the things that got me interested in makeup effects. I would love to do something with a more surreal edge to it, perhaps in some kind of alternate reality. I would populate it with characters from my paintings. This is something that I have been seriously considering for the past couple of years. 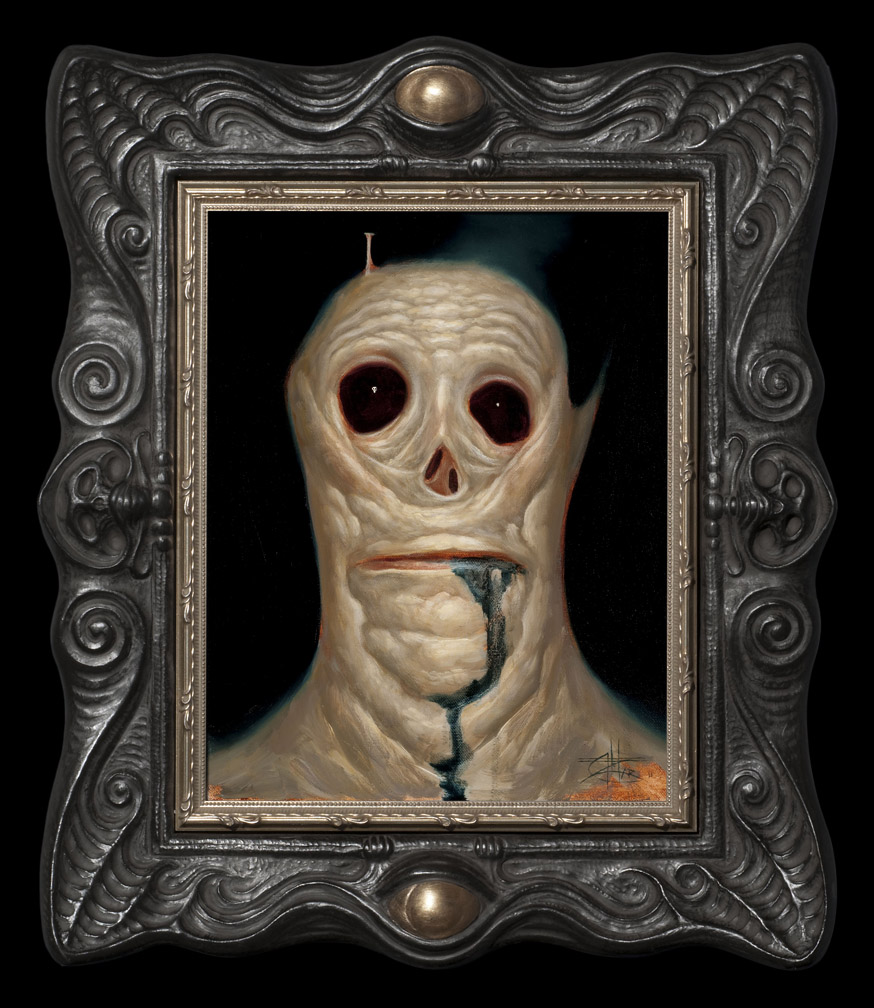 AM: A while back you had a joint show with your stepdad, James Zar. What can you say about growing up with another painter in the family and how has he influenced you as an artist?

CZ: I met James when I was around 5 or 6 years old. We hit it off right away. It was kind of like some weird sort of destiny. Even at that age, I knew I wanted to be an artist when I grew up and he came around at just the right time. After him and my mother got together, he moved his studio into our den so I was able to watch him paint day in and day out. It was really a great learning experience for me. He would always answer any questions I had about painting and it had a great impact on me.

AM: It may sound strange but we were very surprised after meeting you for the first time at a show that you were such a normal and nice guy. Has anyone else ever told you this before and do you think fans of your work expect someone strange or different than who you are to be behind the kind of paintings you create?

CZ: I get that all the time! I’m not sure what people expect… some kind of brooding goth guy? I’m from San Pedro, which is a very blue collar kind of town. People there are pretty down to earth. I sometimes feel like I am letting people down by not being that creepy art guy in person, but I feel like it’s more important to be authentic than to have a cool persona. 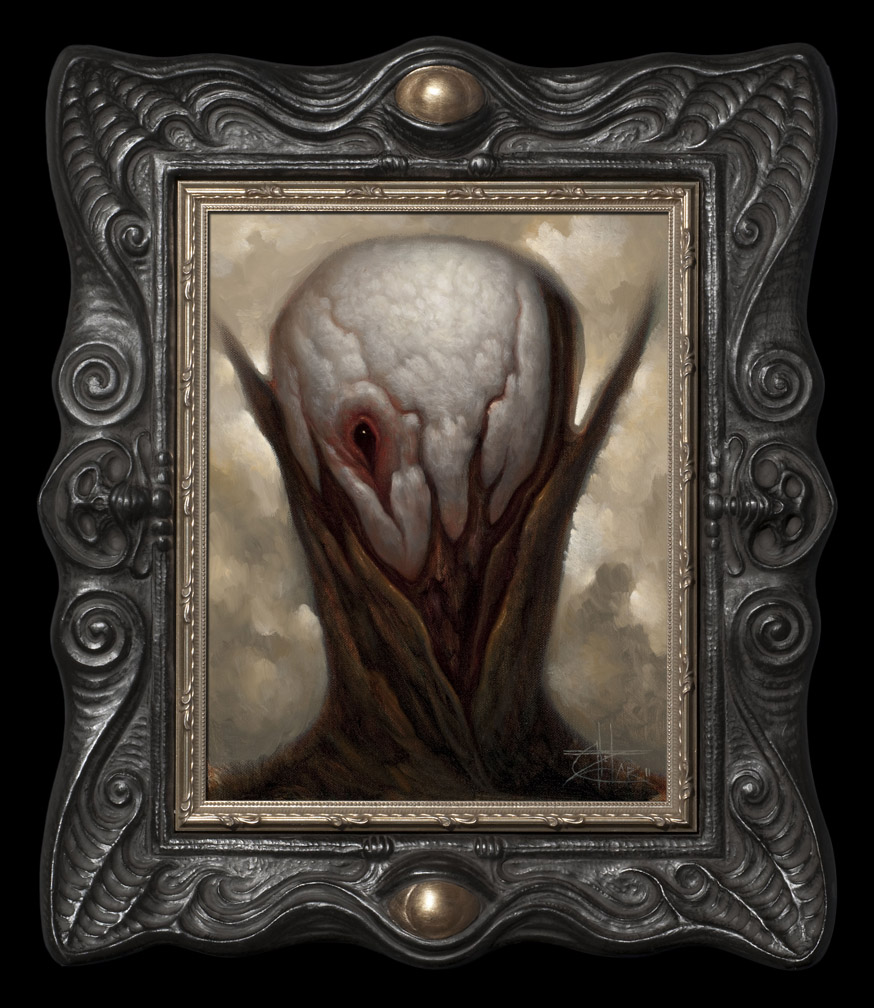 AM: Do you ever have nightmares and if you do, do you see the creatures in your paintings or is it something completely different that frightens you?

CZ: My nightmares are a lot weirder than my paintings. They never have cool creatures in them. They are more like grainy, 70s newsreel footage (a la “Faces of Death”?) and when there are creatures, they are usually really shitty looking like something you would see in a bad carnival funhouse, paper mache kind of stuff. I think it must relate to things that scared me when I was very young.

AM: Can you share with us some projects and shows you have for the rest of 2011 and beyond?

CZ: Believe it or not, I have another solo show coming up at Copro Gallery in October! That’s only 3 months away! I have also been doing the tattoo conventions. Those are great fun and I think I have more fans there than anyplace else, even more than the gallery scene.

As far as next year goes, I will be curating a couple of shows: Conjoined – The Sequel at Copro Gallery (the follow up to Conjoined: In 3D, my group sculpture show) in January and a group show in July of tattoo artists/painters, also at Copro. I also have a small solo show I will be doing in May with Chris Ryniak at Stranger Factory, Kathy Olivas and Brandt Peters’ new gallery. After that I am taking a break!

Another project I am really excited about is my art book Black Magick: The Art of Chet Zar, which is being published by beinArt Publishing and is scheduled to be released sometime early next year.