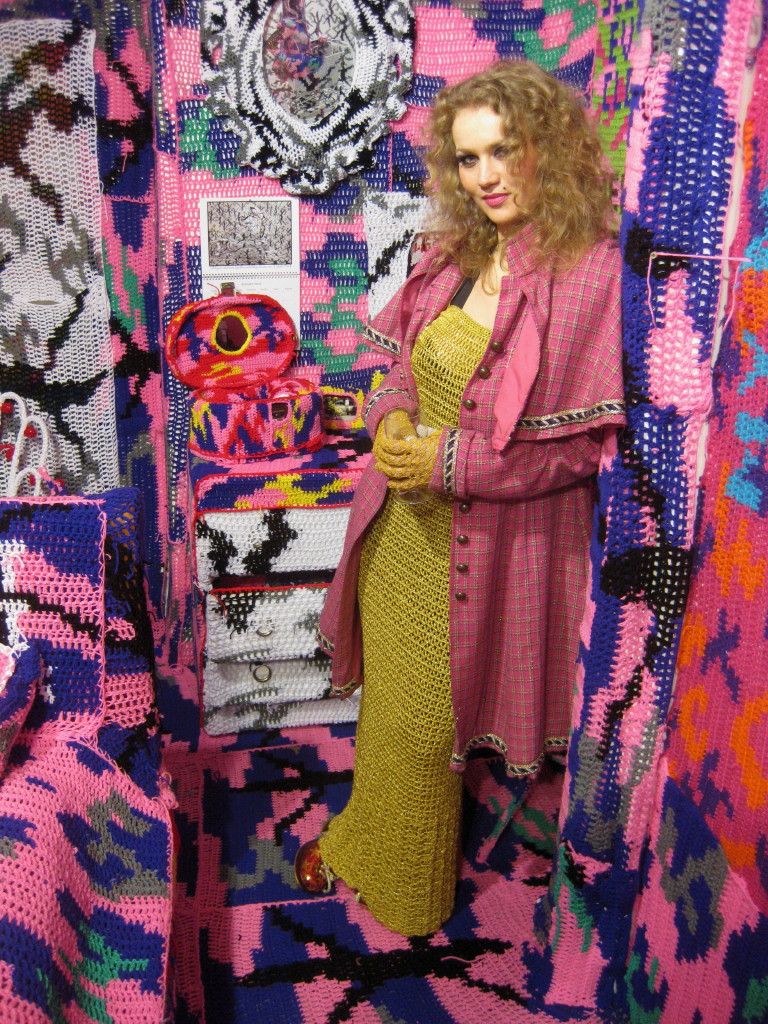 AM was at Tony’s Gallery in Shoreditch on Thursday to see the first UK solo show by Olek (set-up and teaser photos here). The New York-based artist has been making the most of her extended London visit, transforming the ground floor of the gallery into a domestic setting filled with crocheted furniture and other household items. Everything but the entrance area, the ceiling, and a couple of plants has been given a second skin.

The combination of brightly-coloured yarn and Olek’s signature camouflage pattern means that the exhibition contents are often difficult to distinguish. Objects appear to merge with the floor, the walls, or each other — which makes wandering around this sculptural installation truly disorienting. We would recommend the experience.

“I do not expect to be a mother but I do expect to die alone” runs until 23 March. See more photos of the opening and additional commentary after the jump. 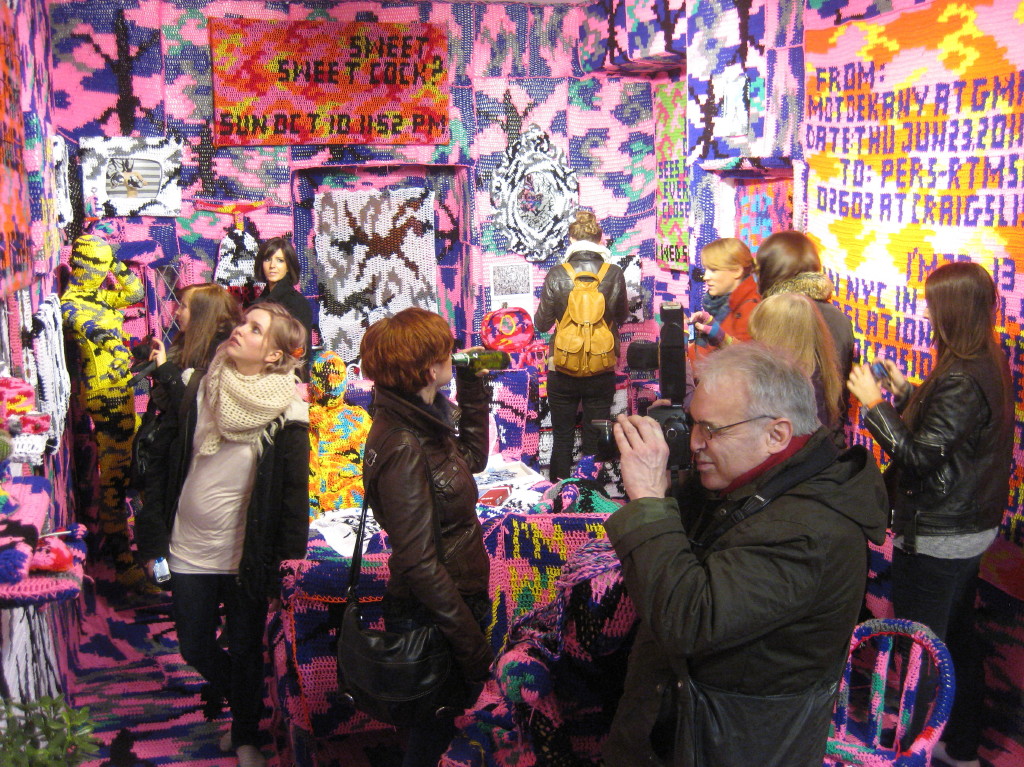 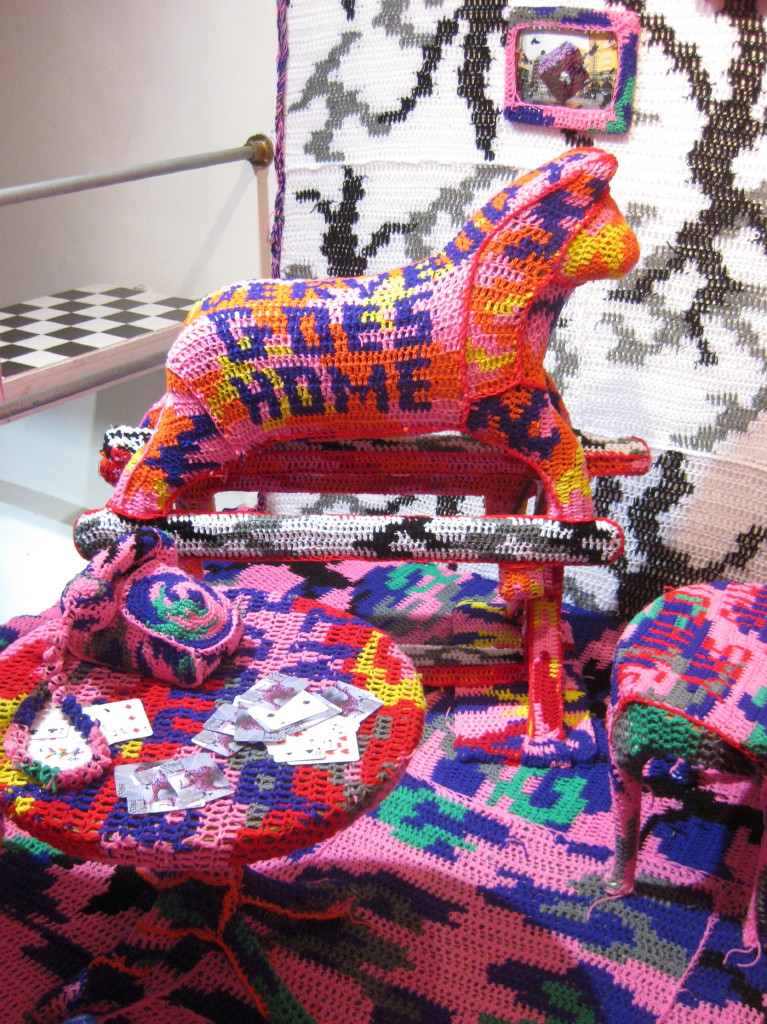 'Hide until everybody goes home' 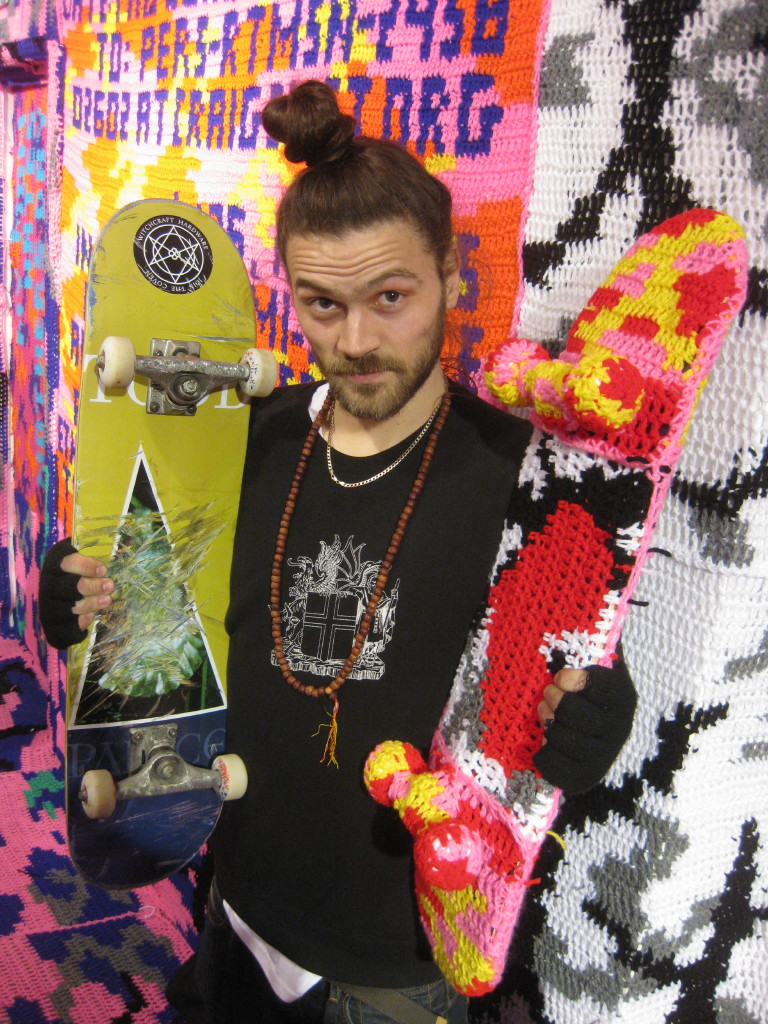 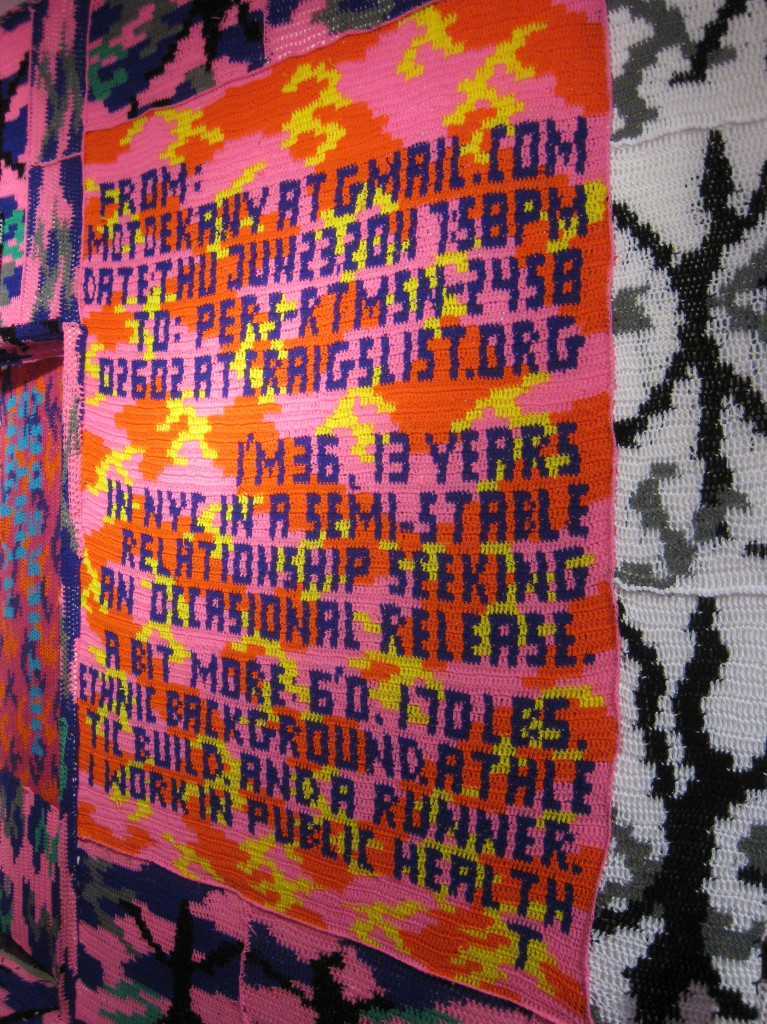 The reason why one serious boyfriend quickly became an ex 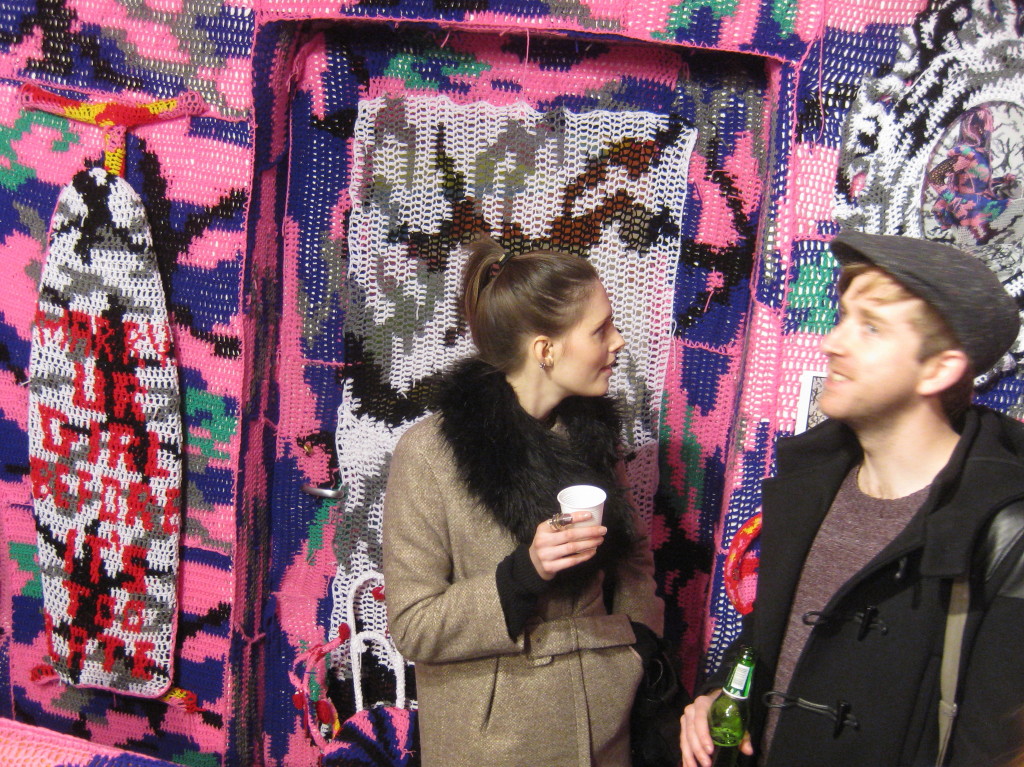 'marry ur girl before it's too late' 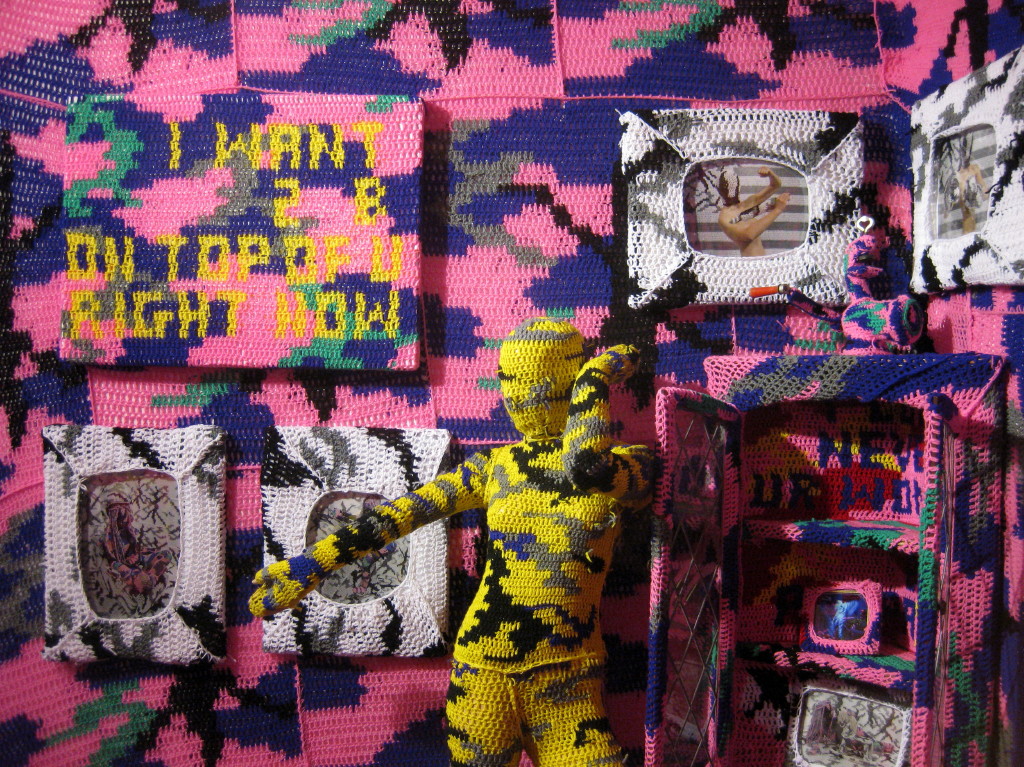 A performance aspect is integral to openings featuring Olek’s work, and Thursday was no exception. Four crochet-clad figures were part of the installation that evening. As none of them were moving when we first entered the gallery, it took two or three minutes before we managed to tell the difference between mannequin and human. One of the figures we smiled at and gave a knowing nod to later turned out to be mannequin. We lost a few cool points there.

AM admits having been slightly anxious during these initial moments of uncertainty. The comparison may be tenuous, but it felt a bit like entering a haunted house amusement attraction. You know full well that among the life-size dummy monsters will be a couple of down-on-their-luck actors in costume — just waiting for you to drop your guard before they jump out at you. [Is it okay to punch those guys when they do that, and maybe pretend it was an involuntary reflex? There must be some case law on the subject.] 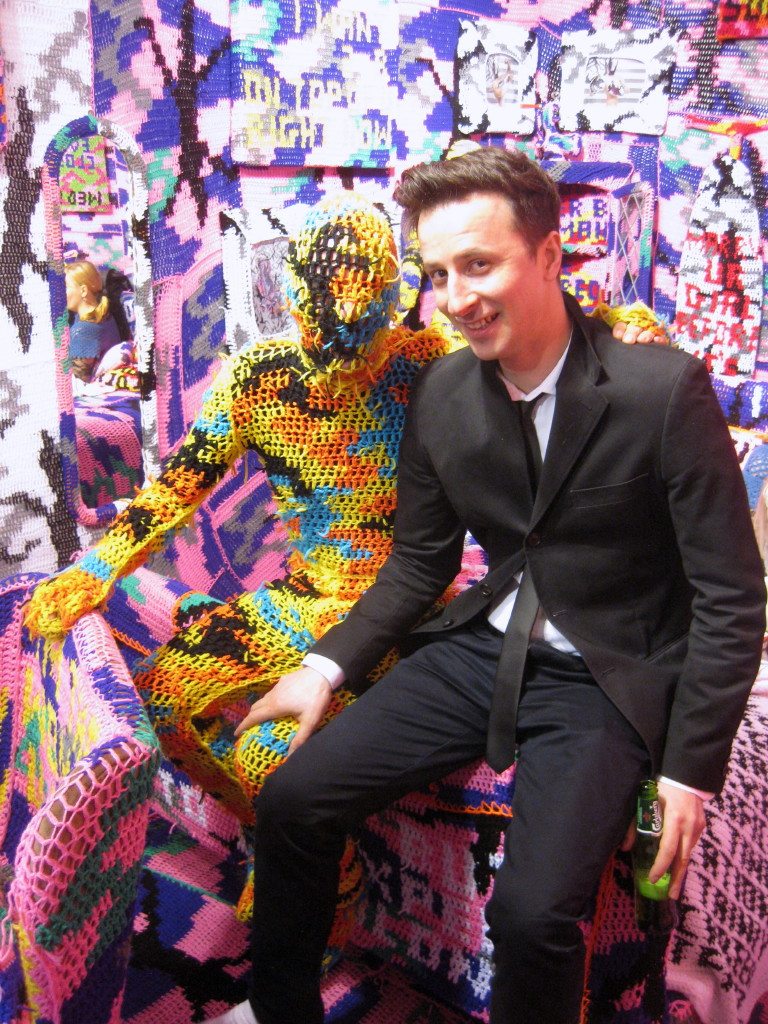 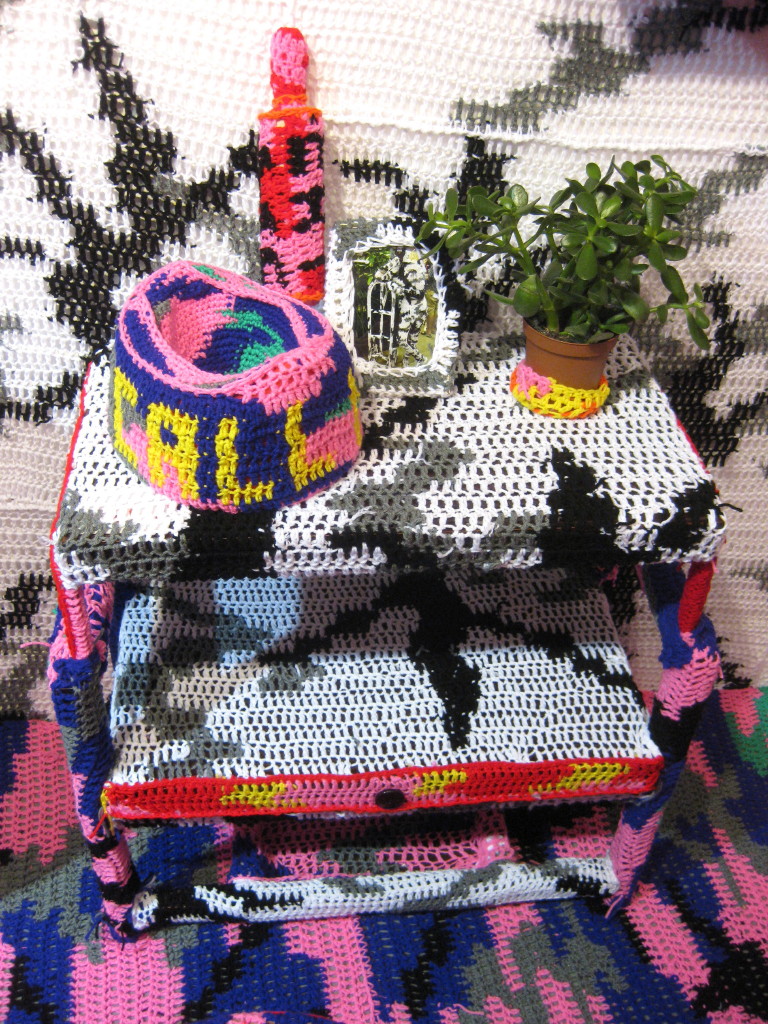 Mixed in with other crocheted items on display are unused toys, an empty highchair, a potty, and a nursery crib — alluding to the name of the exhibition, which quotes one of Tracey Emin‘s hand-sewn blankets. This nod to Emin is both fitting and warranted. Just as the YBA has done with appliqué and fabric, with crochet and yarn, Olek uses a traditionally feminine, craft-based technique and medium to produce fine art.

There’s often a declarative, self-exposing element to Olek’s work that is also reminiscent of Emin. Many of the individual pieces have written commands and assertions incorporated into them. Among the canvas-shaped works hanging on the walls are a number of magnified crochet versions of actual text messages received by the artist, some more comically crude than others. A separate large-scale and prominent piece (featured in one of the photos above) clinically reproduces a personal advertisement posted on craigslist last June by her then partner. Olek’s discovery of the ad prompted a rapid change in her relationship status. We wouldn’t be surprised if it also had some influence over her choice of show title.

Ironically, AM considers the title of the exhibition to be its greatest weakness. The tone of the second limb specifically is self-pitying and melodramatic. Rather than empathy, the quote elicits in us a desire to give the person responsible a good slap. We’d even argue that it lacks consistency with the spirit of the installation as a whole, which — at least on the face of it — is humourous, uplifting and joyful. After the opening, gallery guests certainly went away smiling. And while we hate the idea of doing the same as everyone else, we left smiling too. 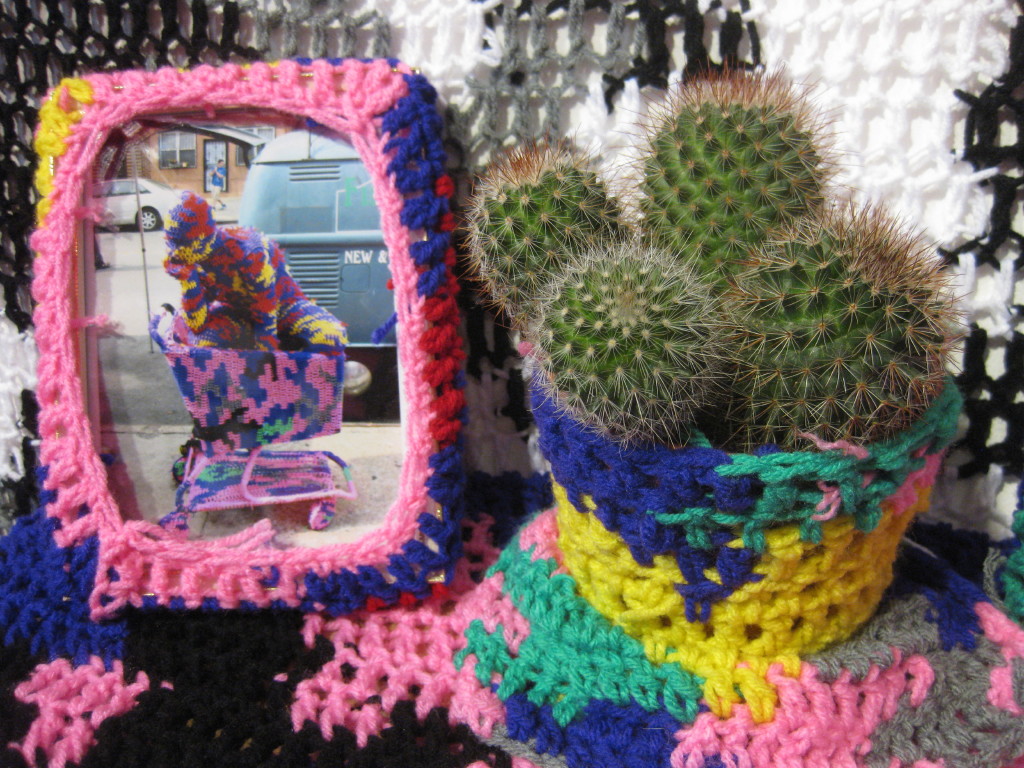 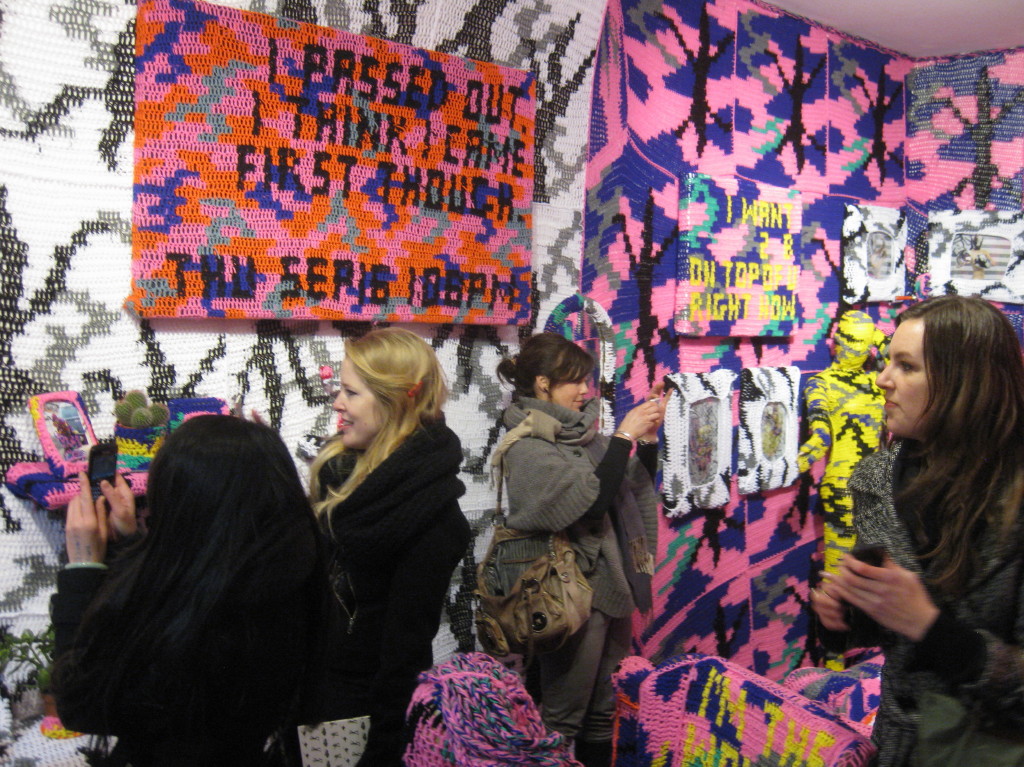 'i passed out. i think i came first though.' 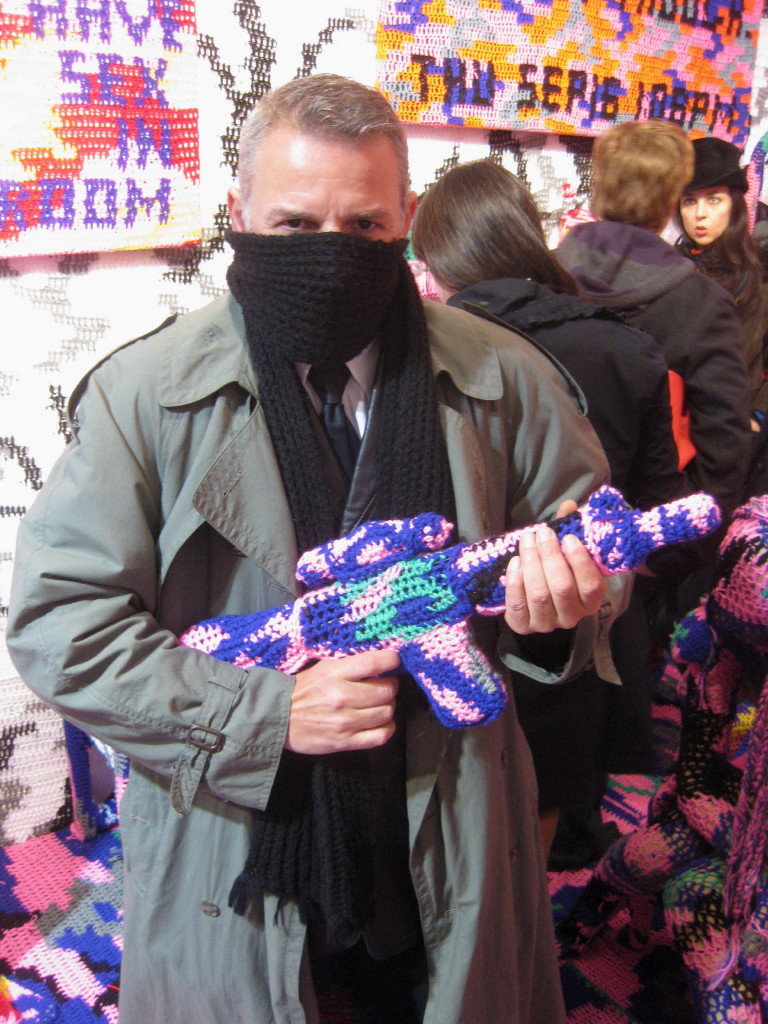 Is it relevant that this guest had a strong Northern Irish accent? 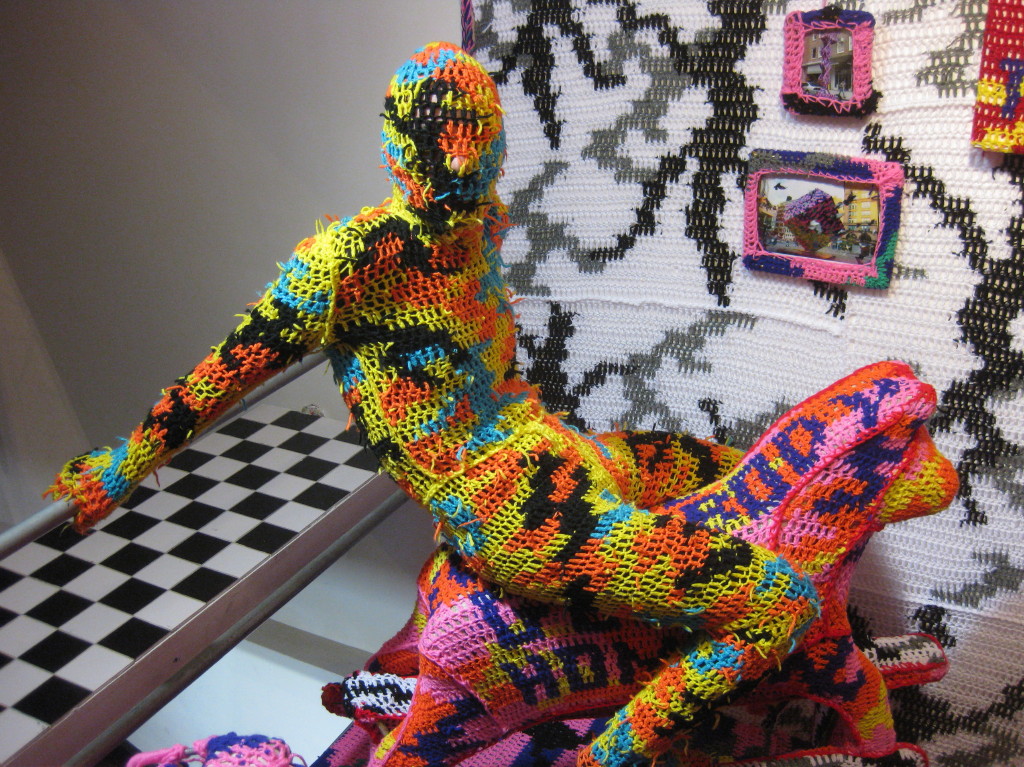 Rorschach, is that you? 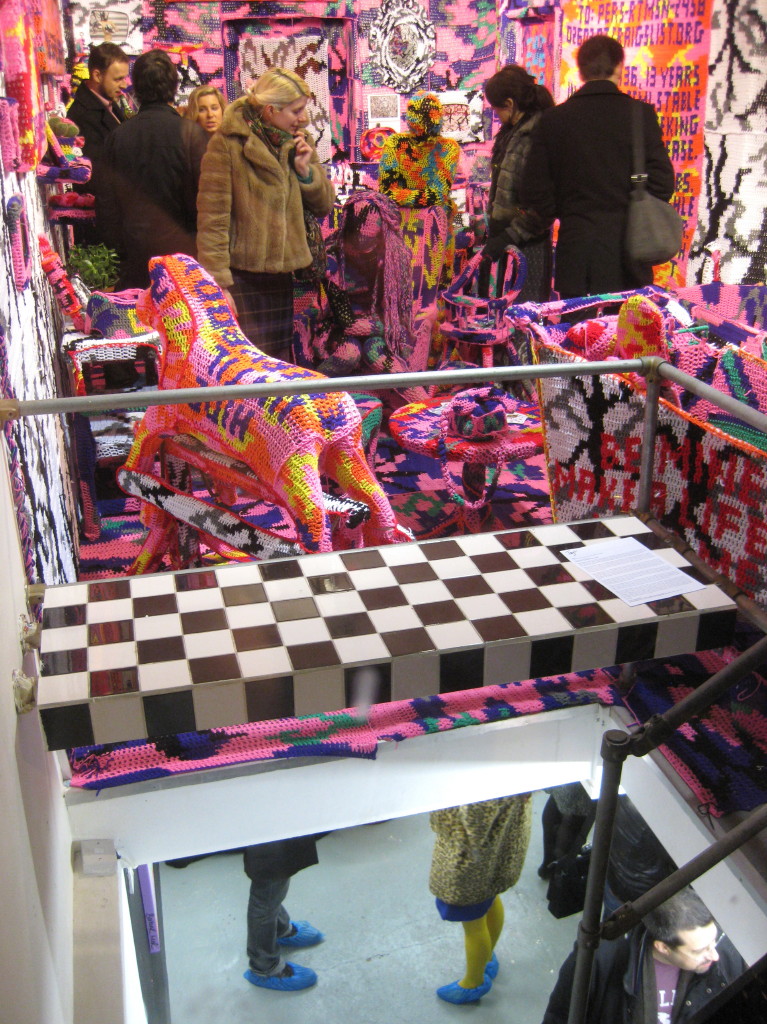 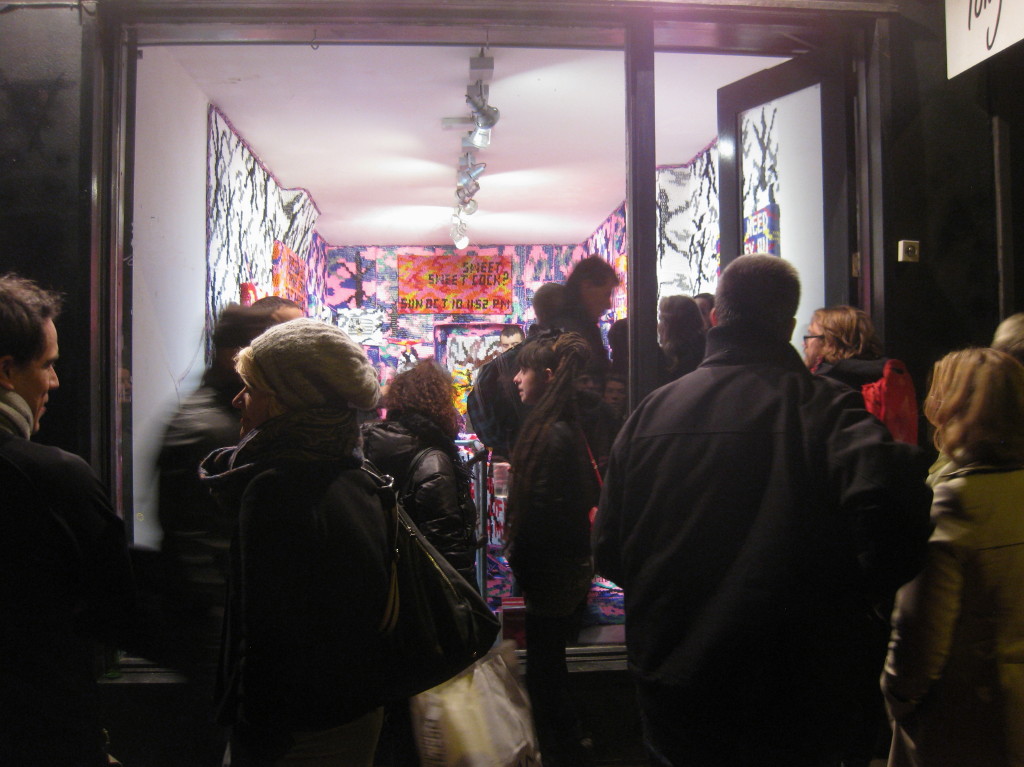 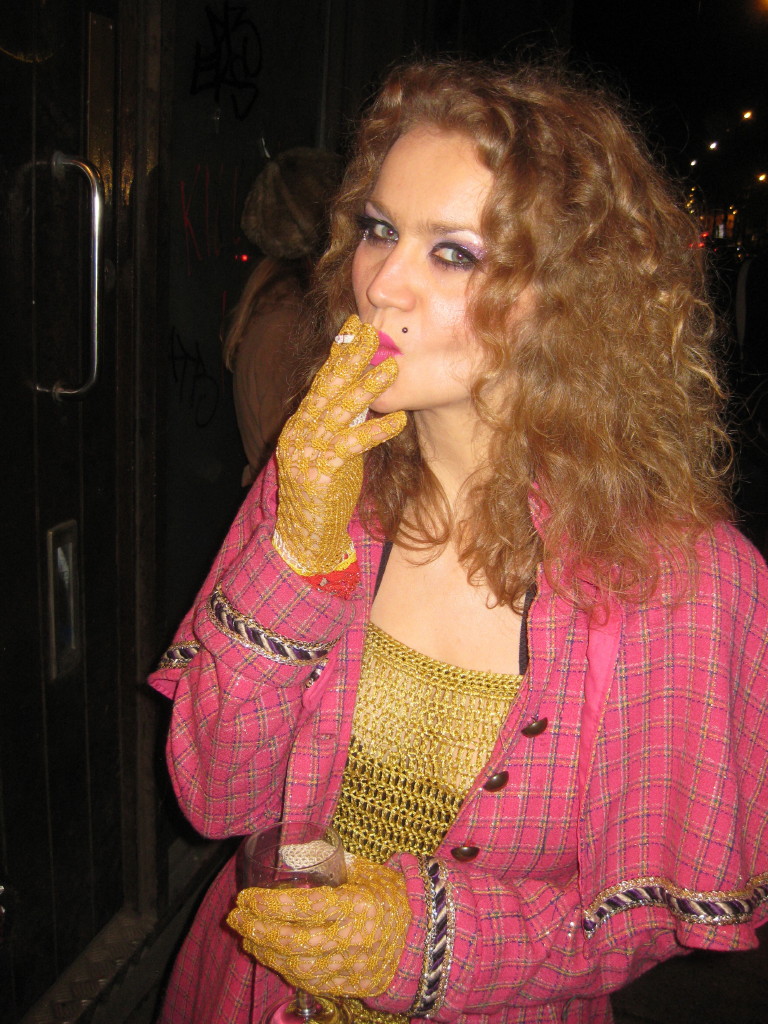 For those who haven’t yet done so, don’t forget to take part in our giveaway. Recommend one must-see film for Olek to secure your chance of winning a Union Jack crocheted by the artist. Leave your suggestion as a comment at the bottom of this earlier post or on AM’s Facebook page. You can double your chances if you’re also the first person to identify this movie being played on Olek’s laptop.

A winner will be chosen at random on Wednesday 1 February at 8 p.m. London time and contacted for their mailing address. Again, one entry per household, please. Powodzenia!

Update on 2 February 2012: The contest is now closed. One entry per household was permitted and each unique entry recommending a film was allocated a number. The random number generator on Random.org selected the one given to Noel Drumbor from New Jersey. Congratulations to Noel, and thank you to all who took part.

Our prize winner walks away with a Union Jack crocheted by Olek. However, no reader managed to secure glory by naming the film on Olek’s laptop. What’s going on? Doesn’t anyone here like skinhead movies? The correct answer: Romper Stomper, written and directed by Geoffrey Wright, and starring Russell Crowe.

‘Hide until everybody goes home’

The reason why one serious boyfriend quickly became an ex

‘marry ur girl before it’s too late’

‘i passed out. i think i came first though.’

Is it relevant that this guest had a strong Northern Irish accent?

Rorschach, is that you?