Morgan Spurlock is an internationally known director, producer, and writer famous for such documentaries as Super Size Me, The Greatest Movie Ever Sold, and the recently released Comic-Con Episode IV: A Fan’s Hope. Opening on April 28 will be the debut of his first curated art exhibition at Thinkspace Gallery in Culver City.  Although he’s one busy man, Arrested Motion had the fortunate opportunity to catch up with him and discuss his interest in collecting art, his future in performance art, and his previous quest to find Osama bin Laden. 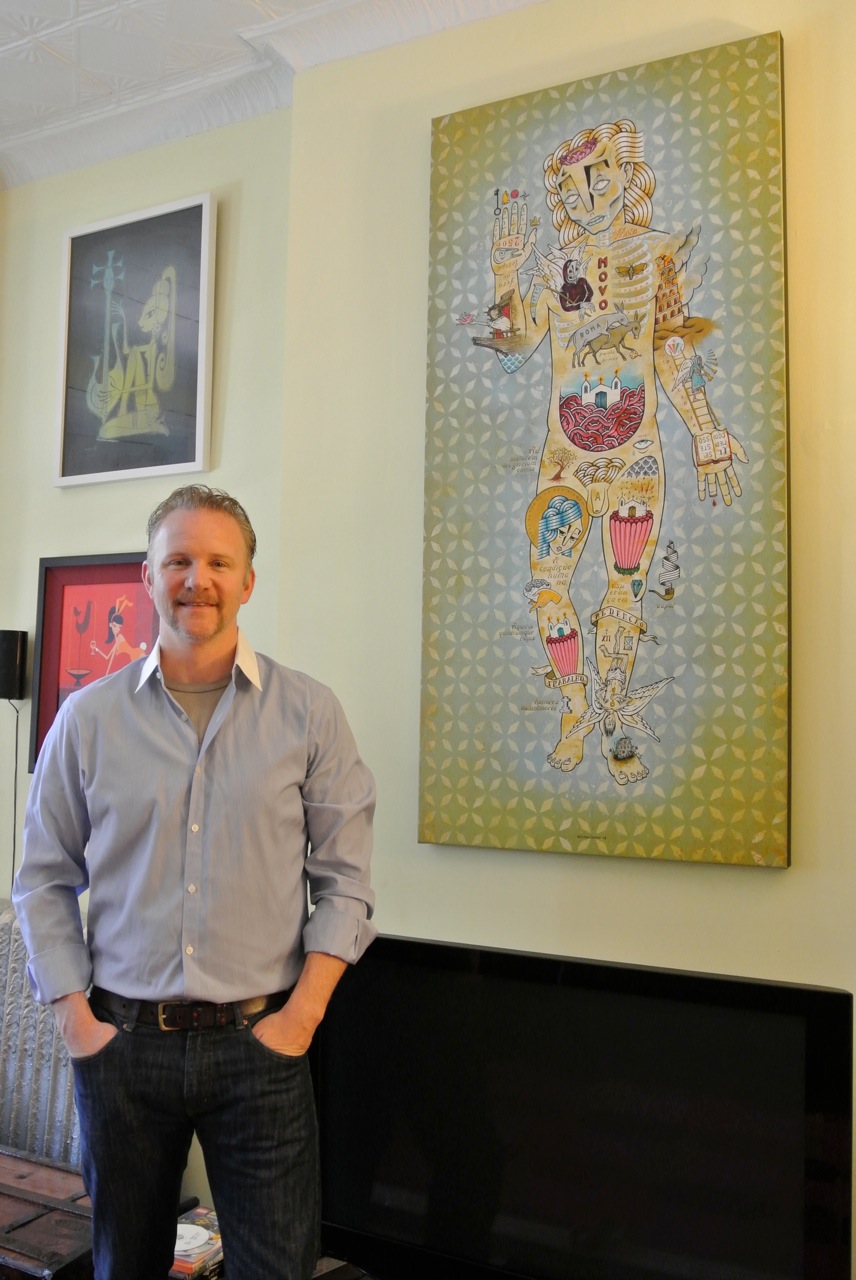 Arrested Motion (AM): Most know you for your work in television and film, most notably, Super Size Me and The Greatest Movie Ever Sold, but they may not be aware that you are an avid art collector as well. Please tell us about your interest in art and some of the interesting art-related stories you can share.

Morgan Spurlock (MS): I first got turned onto the whole art scene by my friend Ron English. He had painted the new and improved MC SuperSized for our poster at Sundance and after that, I started going to art shows with him. I loved it immediately. Pop art, street art, graffiti, low brow … whatever you want to call it, it was like I had woken up from a dream.

AM: How did you get together with Thinkspace and Andrew Hosner?

MS: I started getting a lot of up and comer pieces from Andrew a few years ago and we became friends. When he asked me to curate the show, I jumped at the chance. 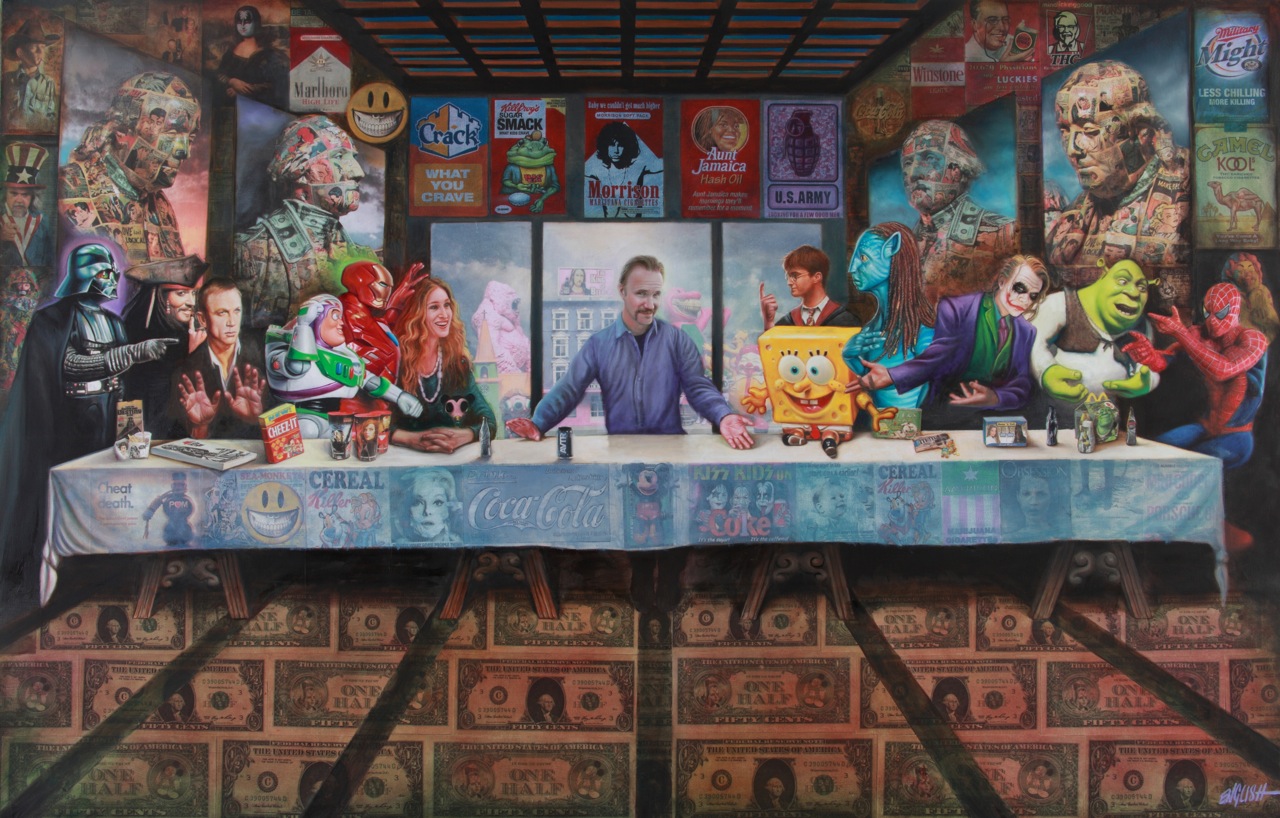 AM: The New Blood, your upcoming curated exhibition at Thinkspace, seems to be more than just the usual gallery “group show” that collects a range of artists together under a certain theme. How did the idea for the show come about and what would you like us to take away from it?

MS: I really believe that, as an artist, it’s your responsibility to help others along the way. Many people helped me get where I am today, and I try to pull up as many filmmakers as I can up with me. Same goes for the art world. There’s a long tradition of master and protégé, teacher and student, and I felt that it would be a great way to explore what artists believe are the future “masters.”

AM: How did you go about selecting the artists for The New Blood?

MS: I sought out artists that I believe have made a significant impact on the art world, whether that be through their styles, body of work, accessibility, you name it. Each artist in this show has, in their own way, impacted art in a unique way. 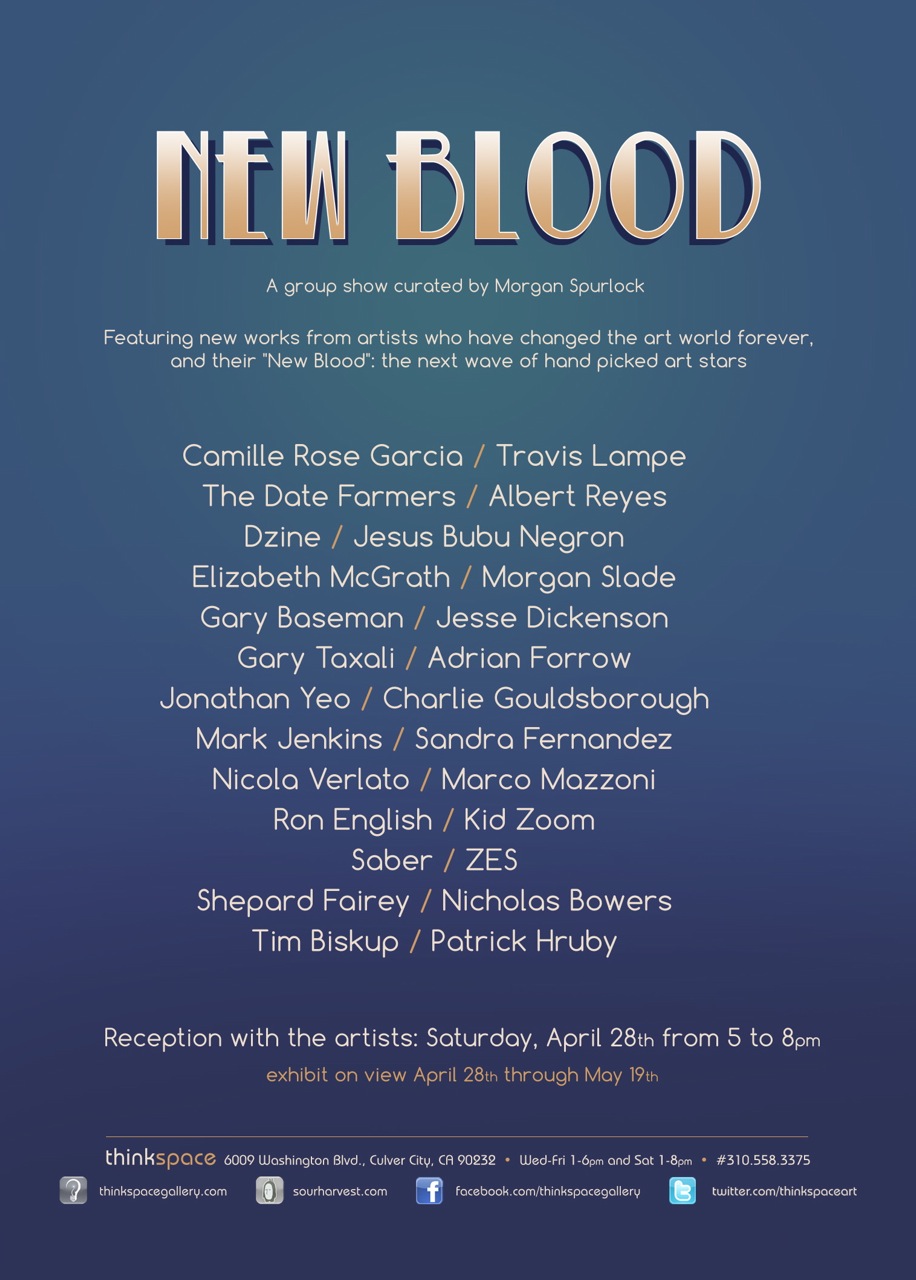 AM: Who are some of those that paid it forward to you in your career or were instrumental in your professional development?

MS: There were many people over the years. A casting director named Tracy Moore Marable took me away from being a PA and put me on the road in a gig that put me in front of the camera. My boss on that job, David Laks, taught me more about marketing and selling an idea than anything I could have ever learned in school, and Sam Goldwyn, Meyer Gottlieb, Howard Cohen & Eric D’Arbaloff had the balls to put out my first movie. Thanks to those guys, my life changed forever.

AM: It’s recently been revealed that Shepard Fairey could produce the film adaptation of 1984. Are there any other artists that you think would make good filmmakers that you could possibly make one of your protégés?

MS: I would love for Todd Schorr to be given a bank of money to make an animated film. How brilliant and fucked up would that movie be? 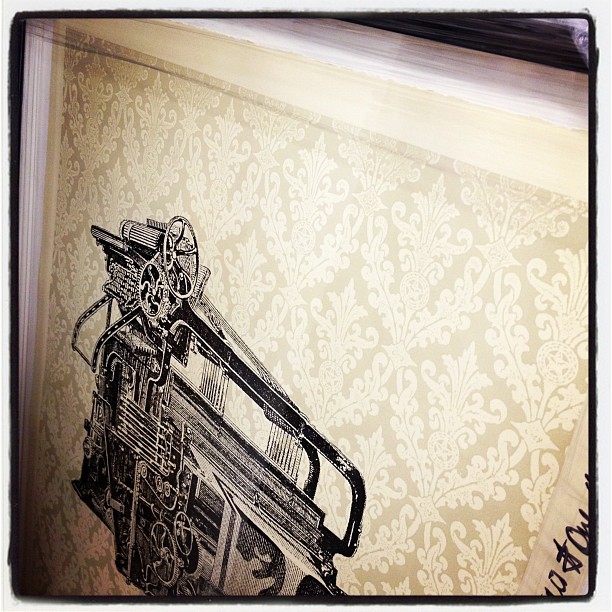 AM: Many consider Jackass to be modern performance art and your physical transformation in Super Size Me could also be perceived as performance art. Would you ever consider doing something like that again or was that something unique that you felt just needed to be done for the documentary to get your message across as effectively as possible?

MS: I’ve talked about doing something that would strain and push my mental and physical limits in a film, but since having my son, the idea of being in potentially dangerous situations has waned.

AM: You tried to find Osama bin Laden in your documentary Where in the World is Osama bin Laden. How close were you and what were your thoughts when you discovered that he was eventually found and killed?

MS: At one point during the production of the film, we were filming just north of Islamabad. Turns out we were less than 25 miles from where they found him. That’s pretty crazy. 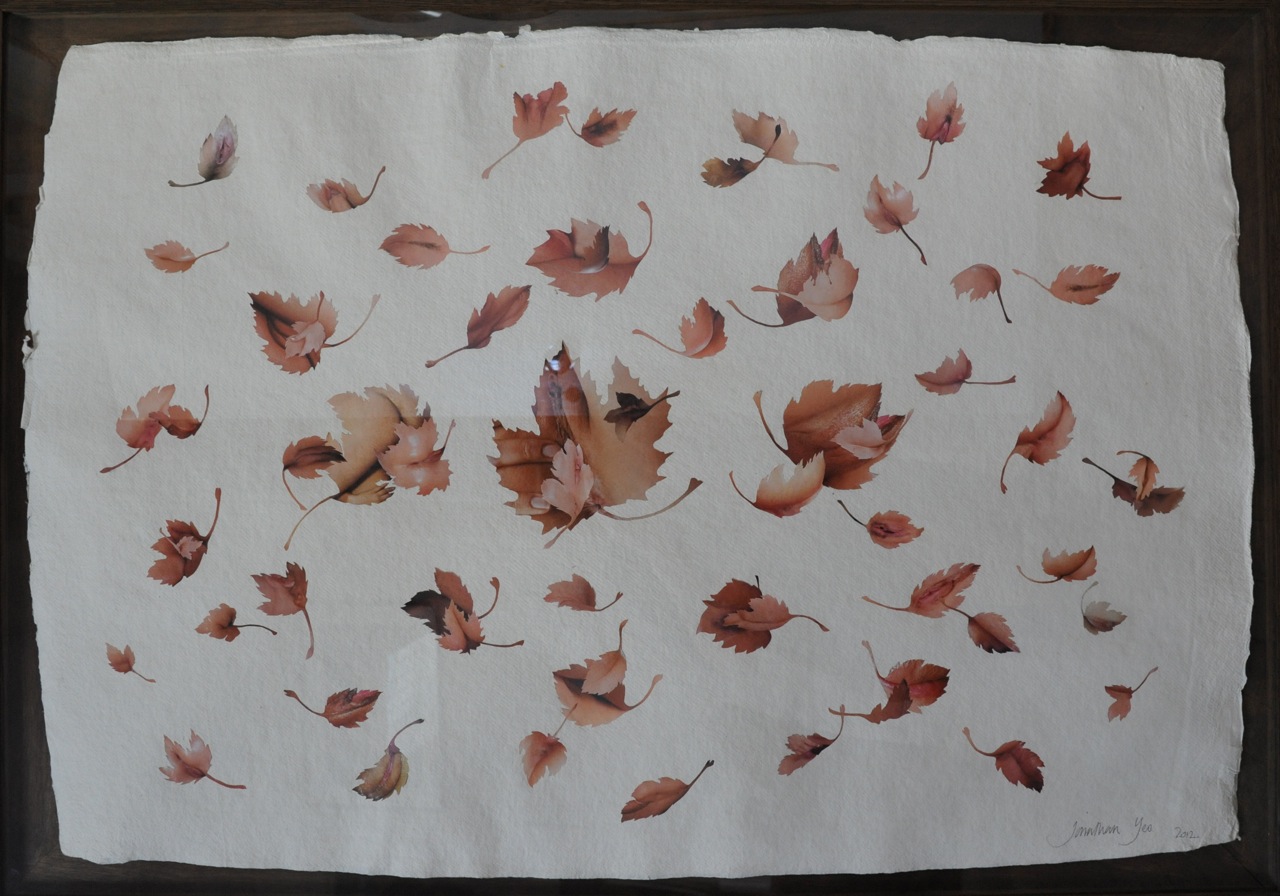 AM: Your films are known to bring audiences that normally do not watch documentaries into theaters. Awareness of fine art is one of those things that may be underpenetrated in today’s culture. Certainly The New Blood has the potential to bring into galleries and museums those that otherwise would not visit. Are there other ways you plan to reach out to others about your passion for art?

MS: All I can do is scream from the rooftops and hope someone will listen. Its paid off for my movies, maybe it will work for this show too.

AM: Thanks for your time Morgan and best of luck with the show. 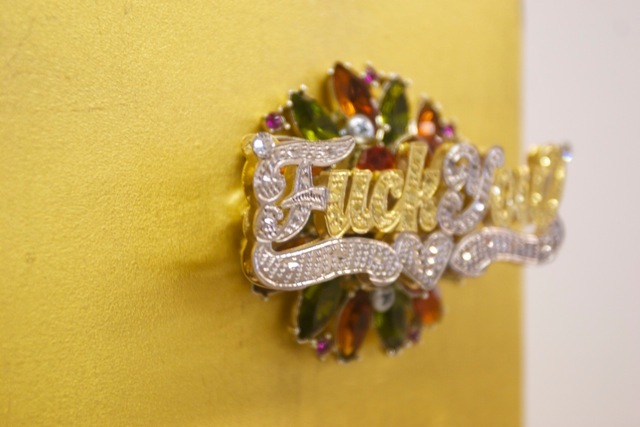