Chances are, you probably know of Mike Maxwell not just for his own art, but also the series of podcasts he releases called Live Free, where he interviews artists and broadcasts the results. The San Diego native is now finalizing the details for his solo exhibition in San Francisco at Nowheresville Gallery entitled The Span Of My Attention, which opens on Saturday June 7th.

We thought it was time to even the balance a little a put some questions to Mike ourselves. Read on for our interview and preview images of work from the show. 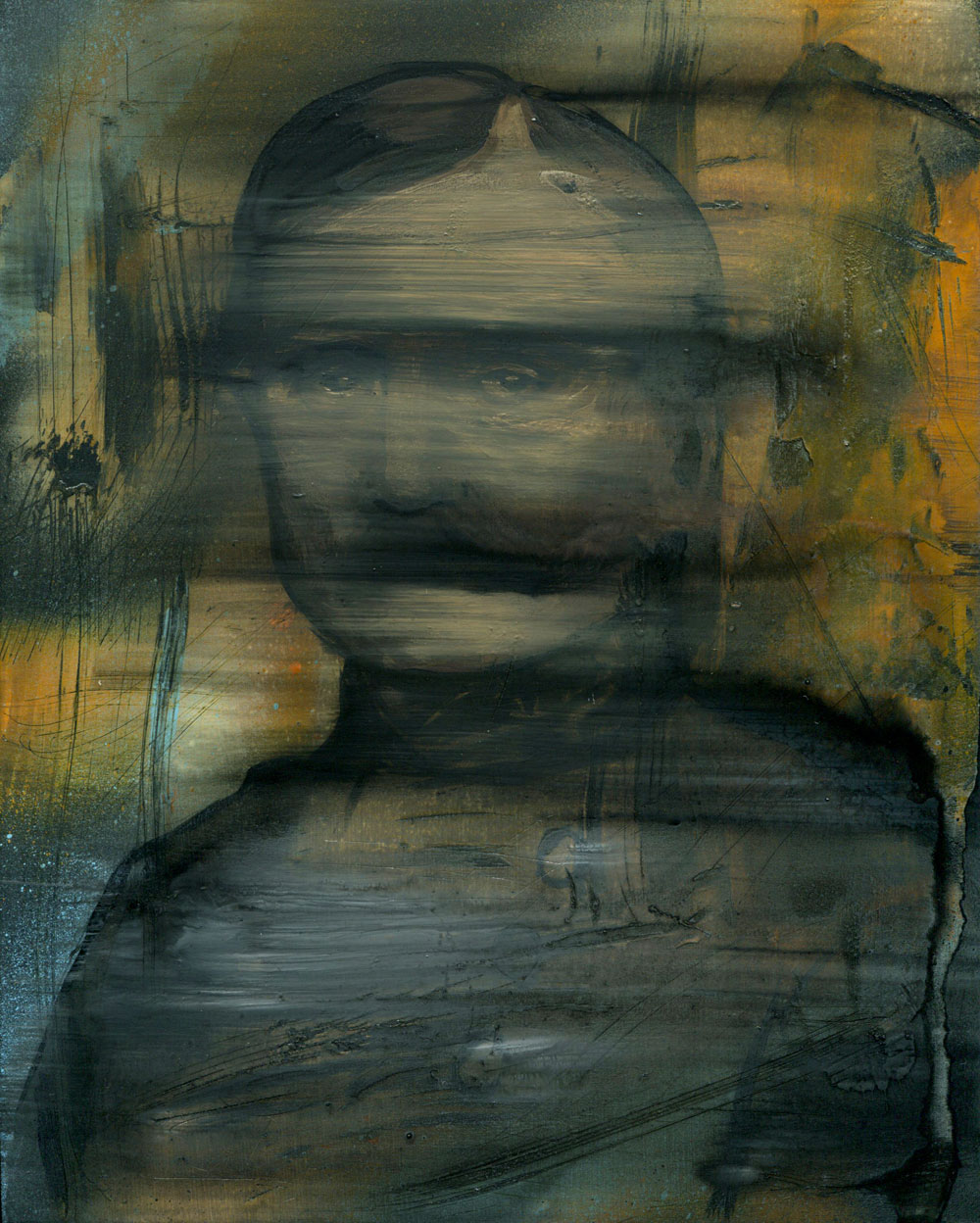 Arrested Motion (AM): Firstly Mike, can you just go into your background as an artist for the benefit of our readers?

Mike Maxwell (MM): I grew up in Southern California and I had art around me from a very young age. My mother has always been very creative. Growing up, I  saw her making amazing drawings, doing sign painting, and even clothing design. My grandmother and grandfather were both painters focusing on landscape oil paintings. My first paintings were made with my grandfather in his studio. I still have the two canvases he helped me paint from that day. So early on, I always knew I would be involved in the arts. Initially, I thought I would be a comic illustrator. I used to love reading and drawing the comic strips in the newspaper. Then in high school I found graffiti, which was the perfect blend of creativity coupled with anti-authoritarian mischief – exactly what I was looking for at the time. So, I began doing some public art projects which inadvertently led me to meeting Shepard Fairey in ’98. He was living and working in San Diego at the time. I was 19 and barely knew anything about the “art world.” It was at this time that I became friends and started working for Shepard as his assistant. I look at this time period as my art school days. I never had any formal education in the arts, but I learned a great deal in the 2 year period working at Black Market with both Shepard and Dave Kinsey at the time. Both played a huge role in helping me along the path. Something I’m eternally grateful for now.

AM: Your new solo exhibition The Span of my Attention opens on June 7th at Nowheresville Gallery in San Francisco. Can you give a little background to the exhibition?

MM: The show will have around 20 small to medium sized new works. There is a mix of figurative and abstract paintings on both wood and canvas. The subject matter is different from piece to piece but there seems to be some unintended patterns occurring around the topics of Destruction and Growth, both manmade and naturally occurring.

AM: And as far as the gallery itself, I understand its run by artist Paul Urich, who you have a long relationship with…

MM: Yes, NowheresvilleSF is Paul Urich’s gallery. We have been friends for at least a decade. I’ve been a fan of his art for a long time, so it was rad to be asked to show at his space. He has an awesome group of artists showing this year. Years ago I showed his work at a space I helped run in San Diego called The Voice Gallery.

AM: I know you’ve jokingly said on your podcasts a few times that you should start using your middle name to make you sound more highbrow and legit, and this time you’ve billed yourself as Michael James Maxwell. Is this an experiment or just a bit of fun?

MM: It’s both an experiment and a bit of a joke too. Public perception is a funny thing. It plays a huge role in the art world, and it’s something I’m astounded by. It’s also something I enjoy mockin . But on the other hand, I think it’s also has something to do with growing older. 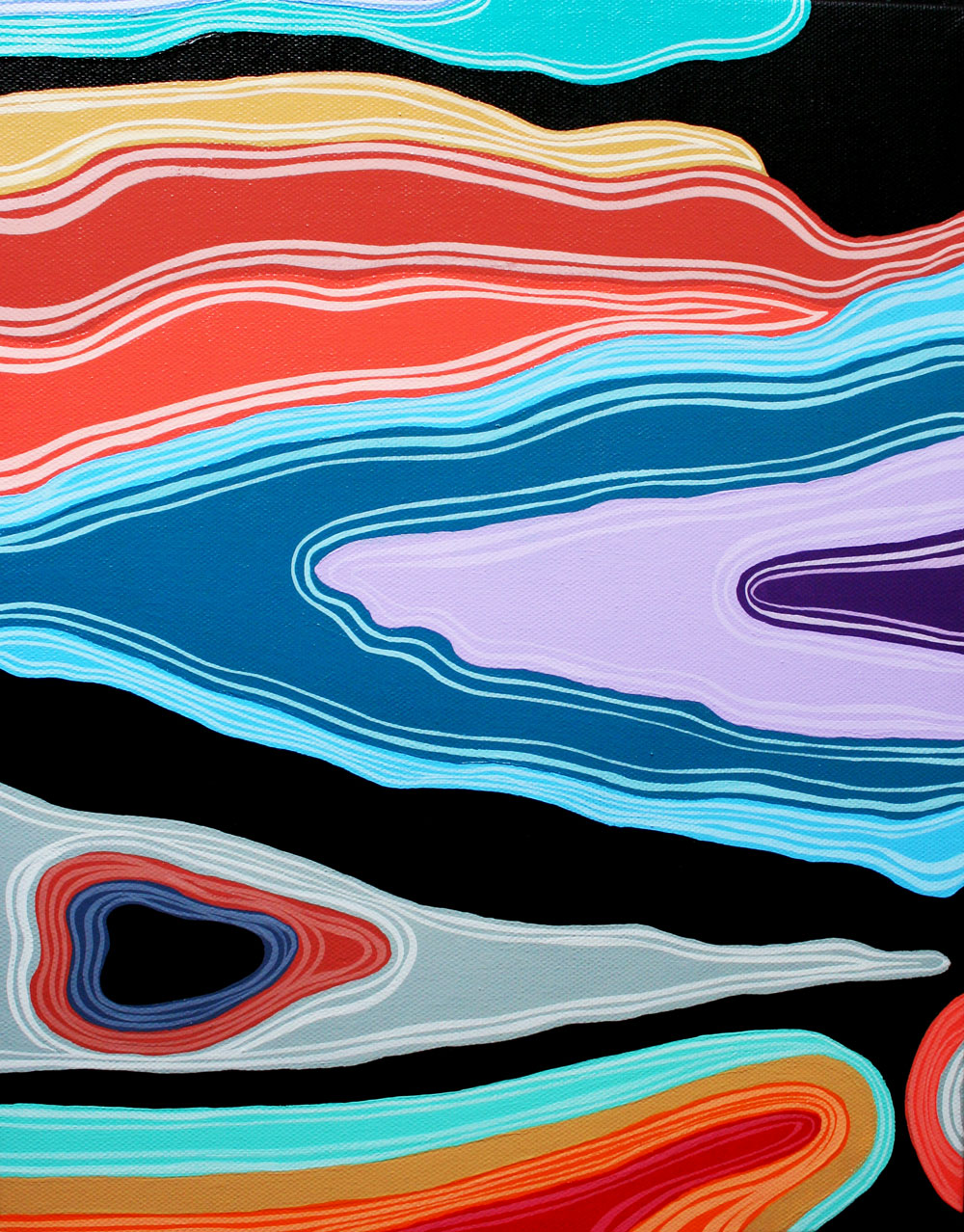 AM: Your statement about the exhibition and the title itself alludes to your desire to vary your output rather than just concentrate on a singular style of painting. Your work is definable in different series of work and I know that you’ve expressed before that you are keen to further explore abstract painting as a newer direction for you. Where’s your head right now in terms of styles you prefer?

MM: Yeah, my attention tends to be all over the place. I’ll work on a series of portraits and somewhere along the way I get the feeling like I don’t want to paint another portrait again ever! So then I’ll work on some abstracted piece and work on a series and realize I really want to work on a portrait right now. Then I’ll want to paint in a very muted palette. Maybe just black and grey. Then I’ll want to paint in full, bright, psychedelic colors. And I’ll never know what my brain will enjoy or despise from day to day. This has been a tough thing to control in the past when it came to working on a new show. So for this one I didn’t try and wrangle the cats. I just let the ideas, topics, and styles work themselves out as we went along the journey together. What I found was that, I only need to make what I enjoy making, at the time I enjoy making it. I expect to continue to move freely from different things from here on out. I’m writing a short film at the moment.

AM: And as far as exploration of different techniques and mediums, do you find the abstracts more fun to experiment with than the portraits? You seem to be able to unleash a different tonal palette on the abstract pieces.

MM: I find a lot of enjoyment from the abstract painting freedom. Portraiture can be very rules orientated, in that it has to look specifically like someone or certain things need to be in certain places. Both give me different rewards though. 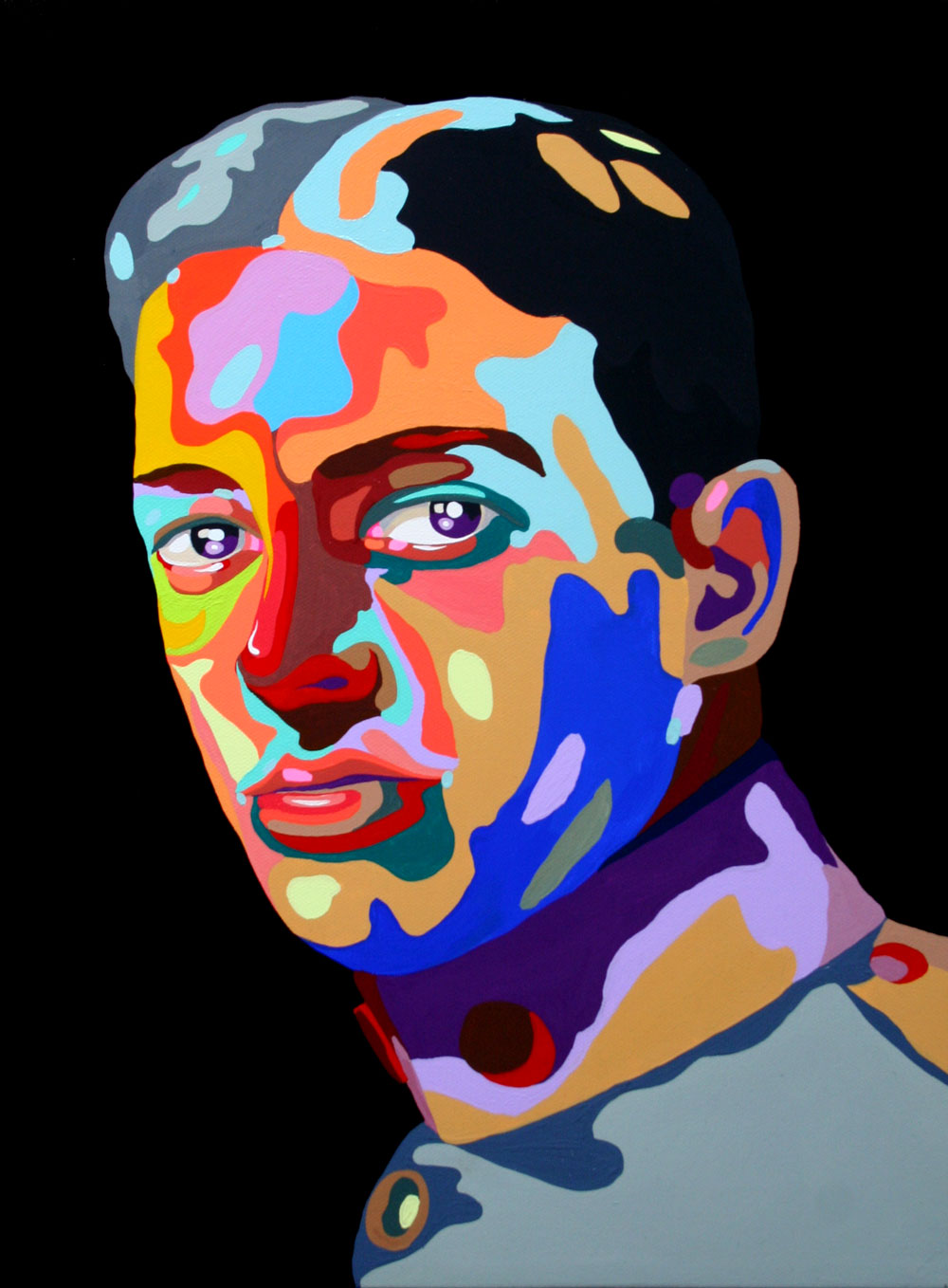 AM: And then, there seems to be some traditional portraits in the show which have in turn been influenced by these colour experimentations…

MM: Yes exactly! This is what I mean about new ideas building new ideas. As I worked out some new abstract pieces, I realized some of the techniques I was applying to abstract works would also work for the portraiture. Adopting some of the color patterns and using them in the figurative has created a new abstract figurative that I would have never made had I not experimented with the abstracts.

AM: I really enjoyed the blurred portraits that you’ve been making recently. It looks like those pieces were generated as a progression from the more ‘illustrative’ civil war type imagery which you’ve associated yourself with for a number of years. Care to explain where your connection with this imagery is generated from?

MM: Thanks! I’ve always been drawn to the Civil War, and more specifically life for Americans at the turn of the century. My work is often about being anti war. I find history tends to change and get altered over time to fit certain narratives and we definitely find that when looking at the American Civil War. I intend to make that metaphor with these distorted images. It might also be important to note that these distorted pieces came out of a happy little mistake with a dry brush and little ink that had yet to dry. Again showing me how experimentation can lead to new things. 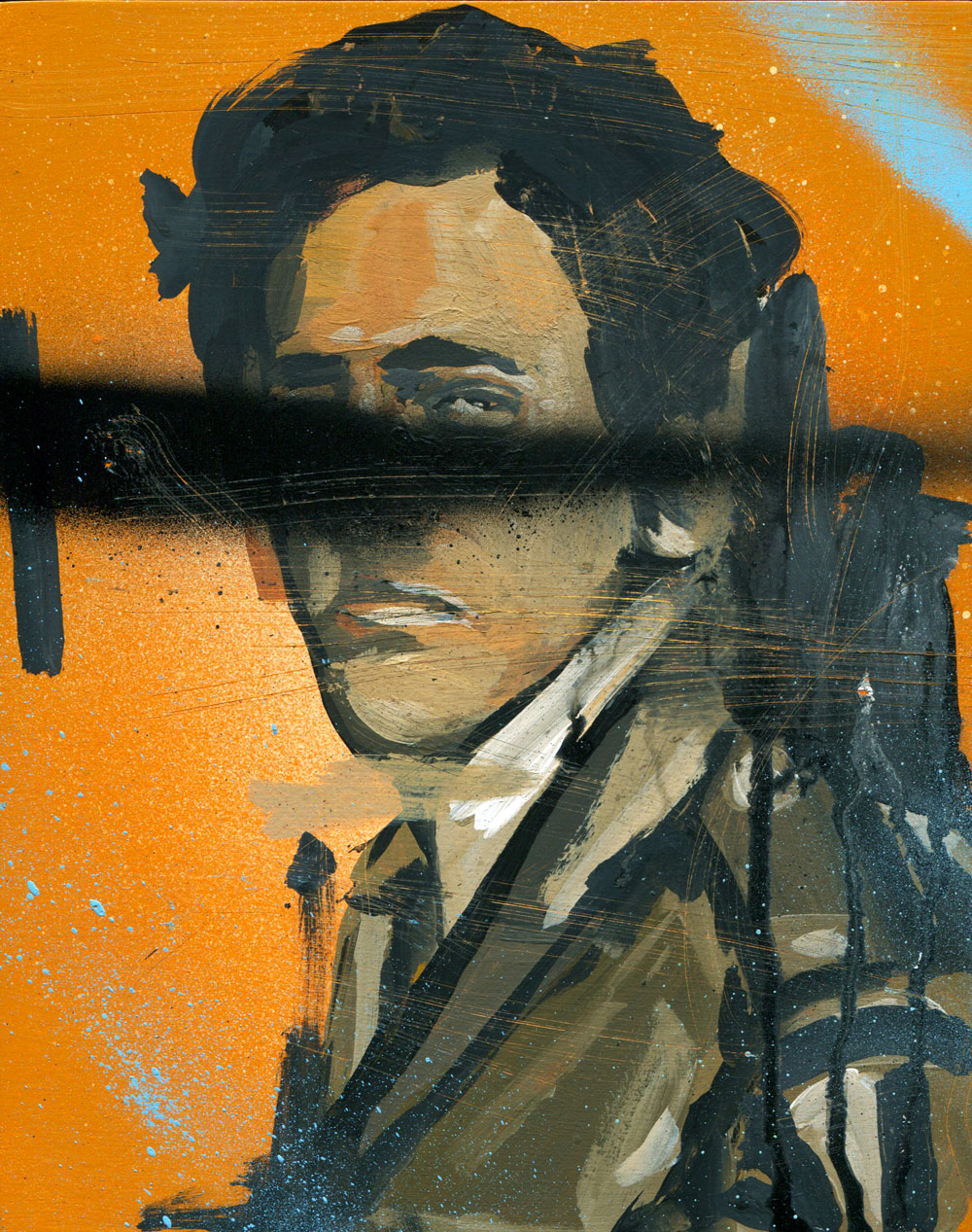 AM: Finally, something I’ve been meaning to ask you for a while but never got around to, The naming of your Live Free podcast is the same statement that you have tattooed on your fingers. I presume that the tattoos came first, but can you just elaborate on the ethos behind Live Free?

MM: I always saw art as a route to true freedom. The ability to choose your life for yourself and to never let another person dictate what this life is supposed to be for you. To me thats  living free. I also see it as something you do for others. To not hinder or harm the life of others is equally important. The phrase first showed up in my art, then I got the tattoo, then I started the podcast.

AM: Thanks Mike – best of luck with the exhibition! 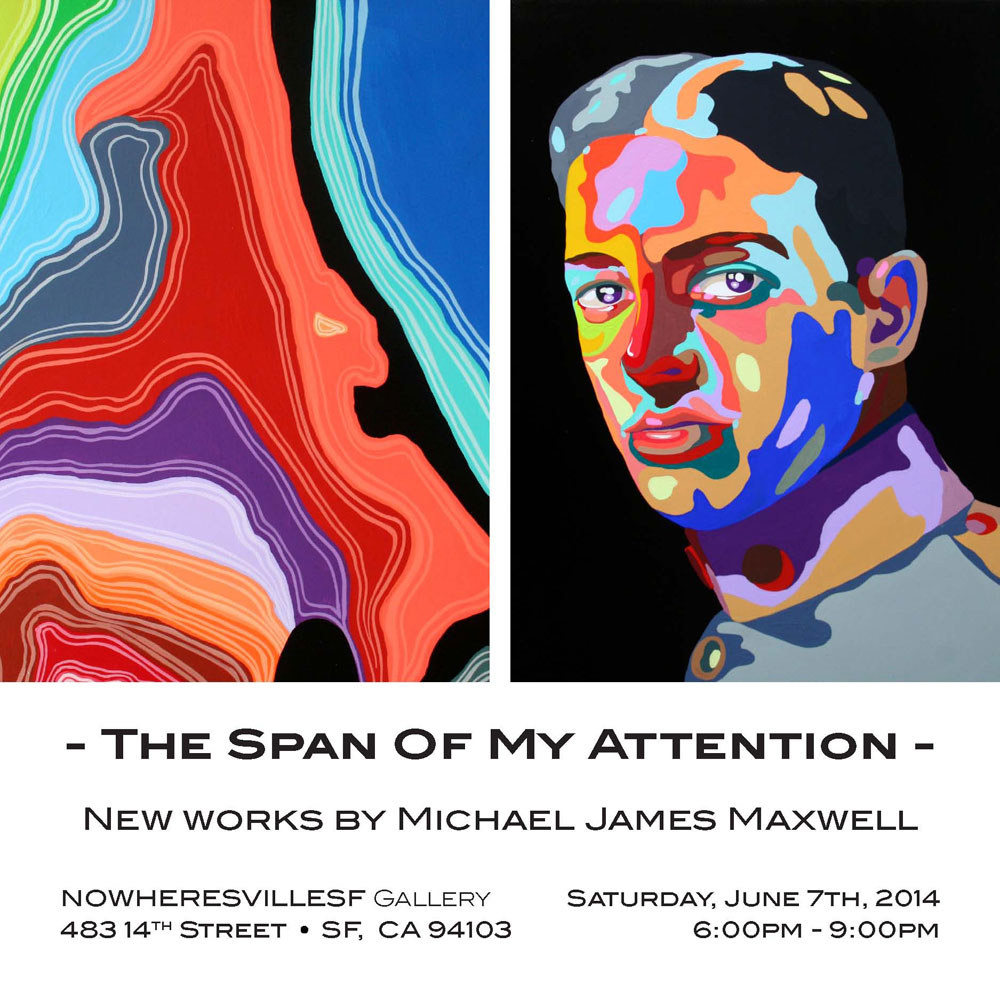