Washington State based artist Laurie Lee Brom is best known for her pixie women set in fantastic worlds. She is a fixture in the art world regularly showing at galleries like Roq La Rue in Seattle and Gallery Nocturna in Belgium. AM recently got the chance to talk with her while she was preparing for this year’s Baby Tattooville about the women in her paintings, raising kids with Brom and how the movie Bad Seed has managed to creep into one of her newer works. 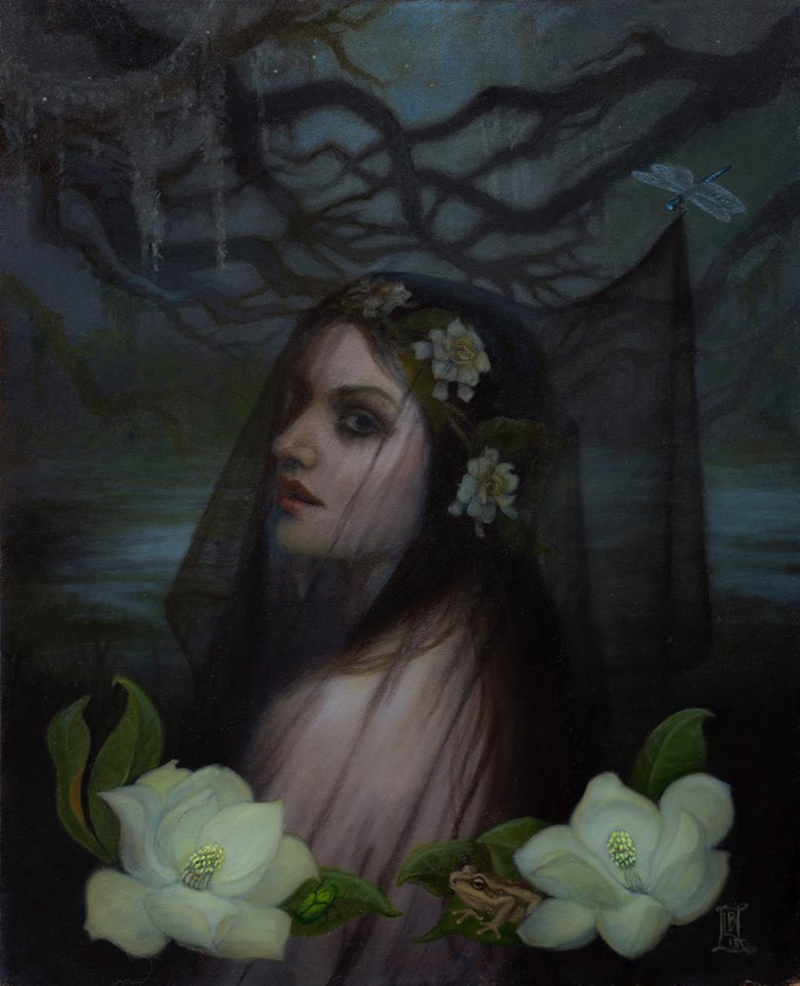 Arrested Motion (AM): I would love to find out a little about the women in your paintings. Do you use models?

Laurie Lee Brom (LLB): I always use models. Often it’s just to have a basis for how the forms work with the lighting and in the end it may have little or no resemblance to the model. Sometimes though, the actual face is a portrait even if the underlying theme isn’t.

AM: Are they ever self-portraits?

LLB: Physically, no, they are never self-portraits even if I’m the reference.

AM: Is there significance to the real life people the pictures are modeled after in terms of the meaning of the paintings?

LLB: Not really, it’s more creating a character and having my model act the role than it is straight up portraiture. I tend to like dark characters and am really lucky to have found subjects who enjoy getting into character. I would actually like to do more “real” portraits that incorporate fantasy elements as I progress. 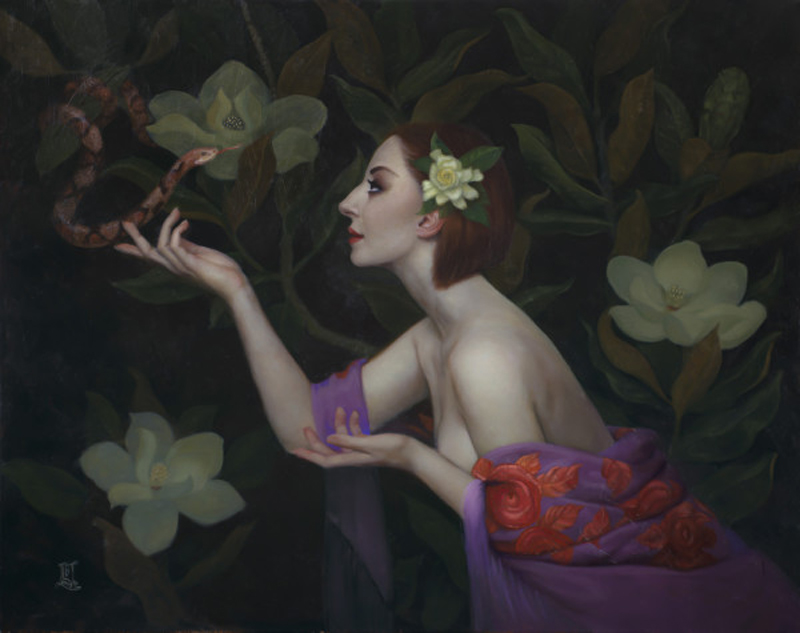 AM:  Your pictures have a narrative quality, is there a story to go with each painting (if so, could you tell me briefly one of the stories)?  Do you find a common theme that comes up over and over in your work?

LLB: Oh, I always have a story playing in my head when I’m working. And even though I mostly show in galleries, I consider myself an illustrator because I do like the narrative so much. It’s often a vague story, or maybe a little part of a story. I tend to keep them to myself though and enjoy hearing how others interpret the work. I just finished a little girl I painted for Baby Tattooville. She was loosely based on the film the Bad Seed. I put her in the same dress that Rhoda Penmark wore in the movie. The wallpaper behind her has an angel and devil whispering into her ear and I just kept hearing in my head, “But why should I feel sorry? It was Claude Daigel who got drowned, not me!” Yeah, I think that angel stopped talking to her some time ago.

I do have common threads in many pieces. Mostly that would be nature and ghosts. I was lucky enough to grow up connected to nature on the coast of Charleston, SC. I was way into the frogs and crawdaddies and huge waterbirds. I enjoy having subjects communing with animals, especially nocturnal ones. And I love anything related to spirits and that is surely also traced back to Charleston and all the ghost stories there. I’m currently painting a beckoning ghost for a group show at Copro Gallery. 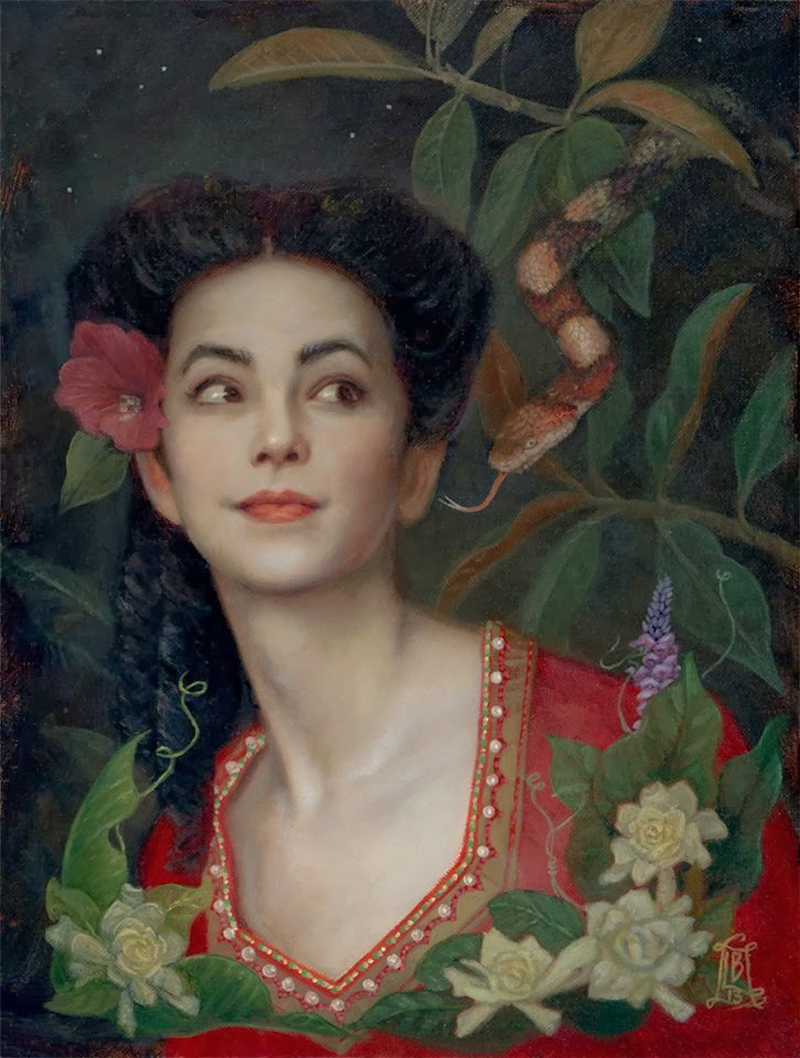 AM:  It is a foredrawn conclusion that you and Brom are the coolest parents ever. Have your kids latched onto the culture of fairies, skeletons, wizards and monsters or are they more into things like hip hop or the Seahawks?

LLB: Hah! I don’t know about the coolest parents, but we really had a great time raising them and are lucky to be deeply connected. Yeah, they certainly inherited our love of art, music and general creepiness. Early on, they learned what effects in movies are. They were able to visit Tom Savini’s workshop when we lived in Pittsburgh. They were like 4 and 6 or something. And it really stuck that what they saw in movies was not only imaginary but made by someone with the coolest job ever. One is a game designer and the other and musician / audio guy.

AM: Do you ever play any of the games Brom has worked on as a family?

LLB: Oh, the boys certainly have played most of the games Brom has worked on. People always hate to hear it, but Brom and I are so consumed with work and creating stuff that we aren’t really gamers. But both kids are. 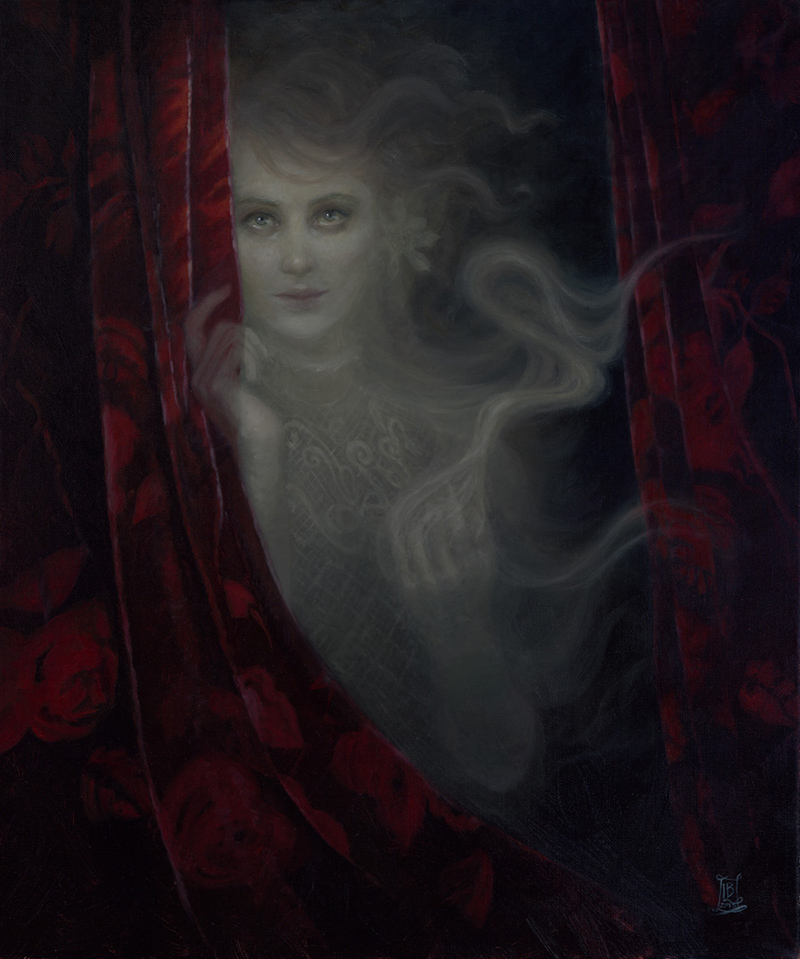 AM: In other interviews, I have heard you talk about taking a long break from art while raising your kids, and during that time off changing from watercolors to oil paints. Can you tell me the moment you realized you wanted back into art; how it felt?

LLB: I always knew I wanted to go back to art. I just had no creative voice in my head for several years while the kids were young. It’s the strangest thing that it returned louder than ever. I was art docent in both of their classes while they were in elementary school. When they got into middle school, I started feeling restless and kind of lost. I took an oil painting class at Gage Acadamy mostly to have a day a week that I knew I would paint. We started going to openings at Roq la Rue in Seattle, where I set my goal to get in there, and it just sort of turned into the creative fire getting reignited. It also helped somehow that both of the boys were highly creative.  They were very encouraging.

AM: Was it a big decision, or did you just sort of slowly let it creep back into your life?  Did you go out to an art supply store or did you just abscond some of Brom’s brushes and canvases?

LLB: Hah! He would never let me near his brushes! I’m a brush demolisher. I think I used a lot of my old paints from art school and he probably filled in a few here and there. 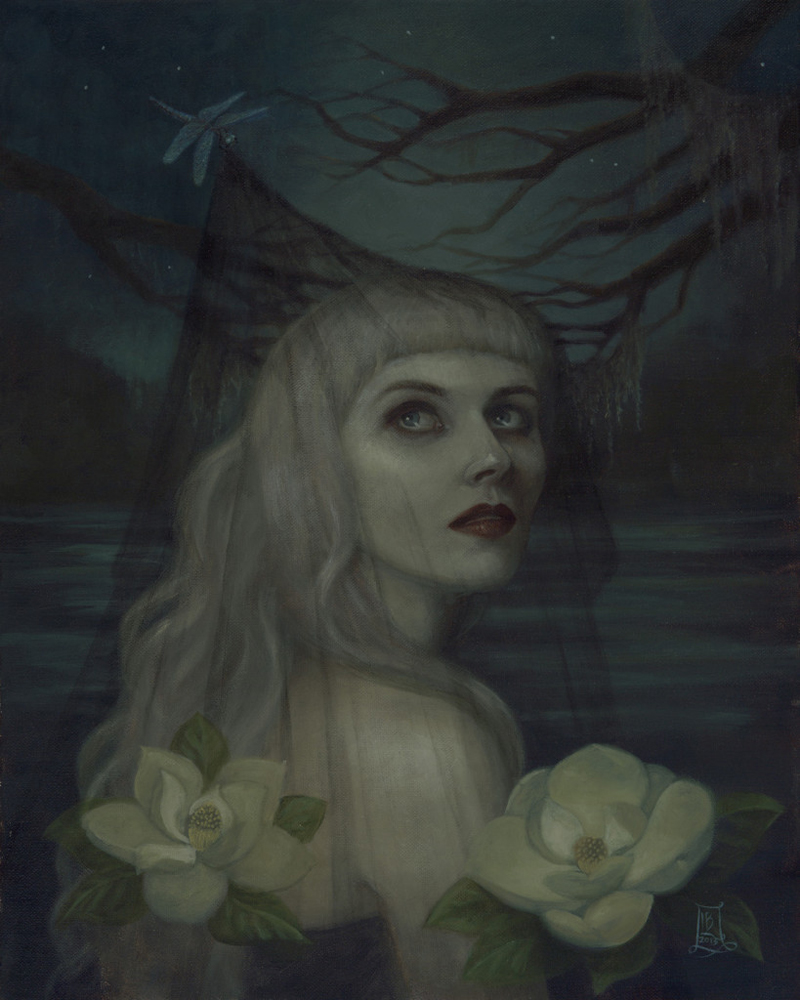 AM: Can you tell me about a typical day for you (I would love to hear if you are up early, or stay up late, what your studio is like (music, quiet), coffee shops, art supply stores, etc)?

LLB: We both wake up early and hit the ground running. We’re both obsessed with whatever we’re working on at the moment and are eager to get back to it. We moved recently and my elderly parents moved in with us. So we check on them, and make the long commute out to the studio. We converted the garage into our studios. Since Brom bounces back and forth between writing and painting and because he’ll jibberjabber (I never said that) all day we have a wall with a door between us. Hehe. I play music most of the day. Sometimes I watch Netflix but I realize I’m not as focused if something visual is going. Sometimes I listen to audiobooks. But every day there is music. I try to keep what I listen to as well as what I surround myself with in the vein of my art. It really helps me to keep a certain aesthetic I think. But we’re kind of hermits! All the cool stuff is just made up in our heads. We have supplies delivered unless we had to leave the house and are near Daniel Smith. We’ve really gotten into working in the yard after work because where we live now has so many critters, woods, a stream and a creek and paragliders. It’s really fuel for the soul and we’re eternally grateful for it.

AM: Have you ever had an encounter with another artist that you found especially profound, or had a lasting effect on you?

LLB: Well besides my dear husband, two of my closest friends are the fabulous artists Lisa Petrucci and Isabel Samaras. They really helped me get the nerve to get my work out there. I seriously think I may have stalled another five years without their encouragement. I’m really fortunate to have them. They’re also very generous artist friends- supportive, never competitive.