With Sandra Chevrier’s schedule for 2015 fully packed with group shows everywhere from POW! WOW! in Hawaii to Castor Gallery in NYC, art fair showings, and finally a big solo show with Jonathan LeVine Gallery, we thought we would catch up with Montreal-based artist. We had a peek inside her studio, talked about her distinctive technique and its origin, meaning behind her work, her past, present and future, and learnt about how women are superheroes of everyday life. 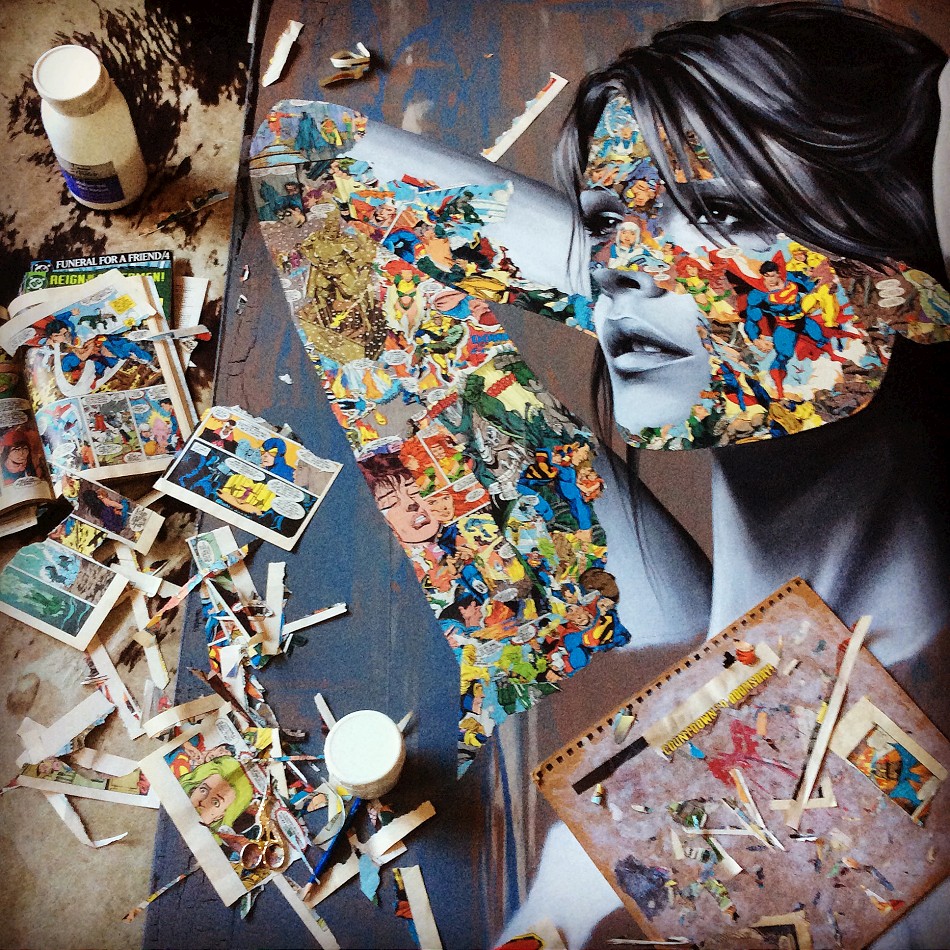 Arrested Motion (AM): What influences your work?

Sandra Chevrier (SC): In general society, humans, and life itself are inspiring. Everything actually. It just needs a thought that becomes an idea then grows into a project. Creativity is the result of experimentation and evolution. It is easy to repeat something over and over because it was successful. By trying and making mistakes, one can evolve and create something new & powerful. That’s what I am trying to do every day. Although I am a really hard worker, I’m not always happy with the results. There is always something good in what we do, even if we fail, because we learn from it. I think, write and sketch a lot. When I find an idea that I love, I want to play with it until I have no more fun. Also on another note, watching my son paint is truly inspiring. There is no limit for him when he creates something. No expectations, no consciousness. Sometimes, he paints with his two hands, truly fascinating!!! 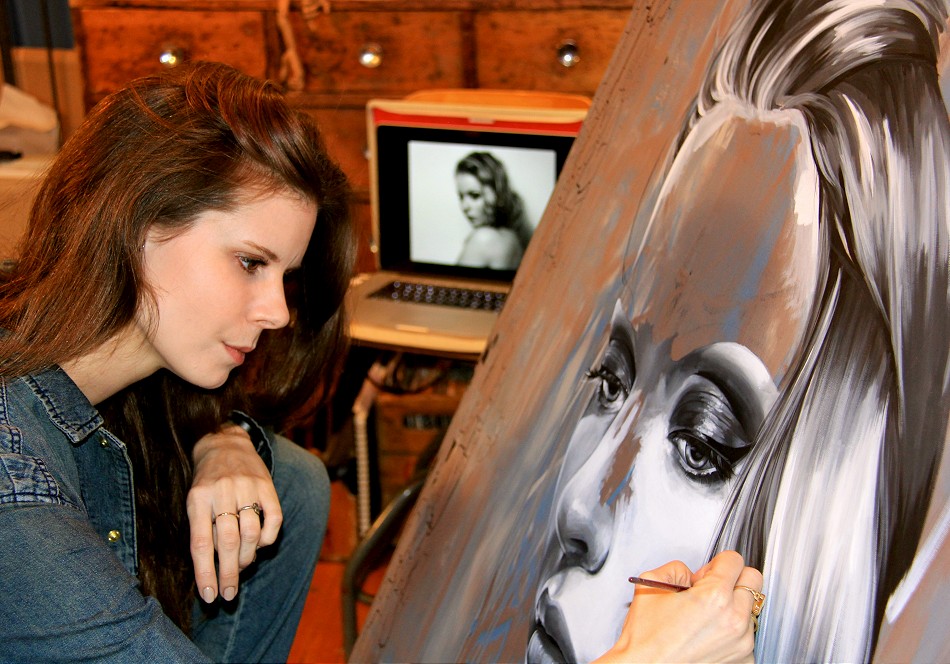 AM: When did you start painting and how did that happen?

SC: I’ve always been drawn into art. When I was a child, in family parties, instead of playing cards with the rest of the family I would do crafts with my aunt. Then in high school, teachers were asking me to stop drawing on desks, when I was trying to tell them ‘’it wasn’t me’’ then they would tell me I was the only student who could draw as well! So it started with graphite, then I tried paint and different materials. To me art is not only a way of expression, it is a language in itself. At first, it was a liberation of something that I was holding inside. I used it as a release just like you can use a journal. When I first started to “be an artist,” I used creativity to liberate my inner demons. At that time, I did a lot of self portraits. It is still a way to express myself, by showing the struggles that women like I go through everyday. There is a lot of me in everything that I do.

AM: Do you have any formal education in art?!

SC: I prefer to say that I am a self taught artist. I never had technique lessons. Bu,t I have a bachelor degree in Fine Art. It was great to have art history courses. 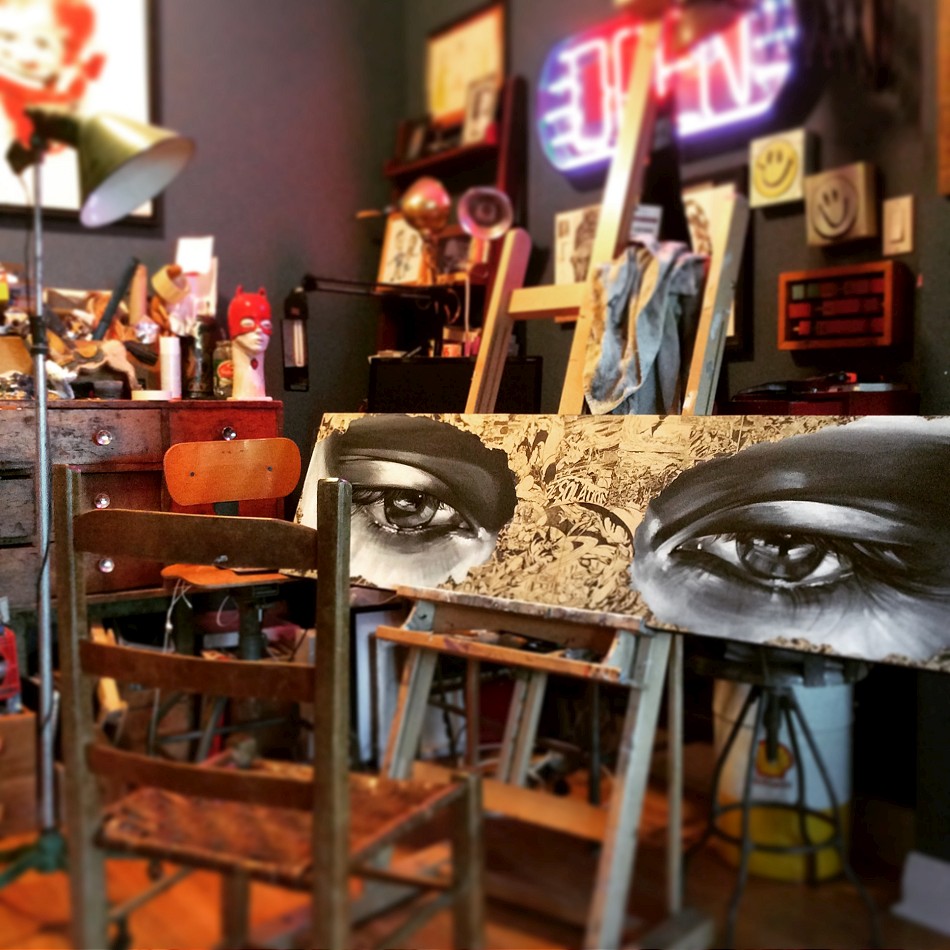 AM: Does your work tell particular story?

SC: The series Cages is about women trying to find freedom from society’s twisted preconceptions of what a woman should or shouldn’t be. These women encased in these cages of brash imposing paint or comic books that masks their very person symbolizes the struggle that women go through with having these false expectations of beauty and perfection as well as the limitations society places on women, corrupting what truly is beautiful by placing women in these prisons of identity. By doing so, society is asking them to become superheroes. 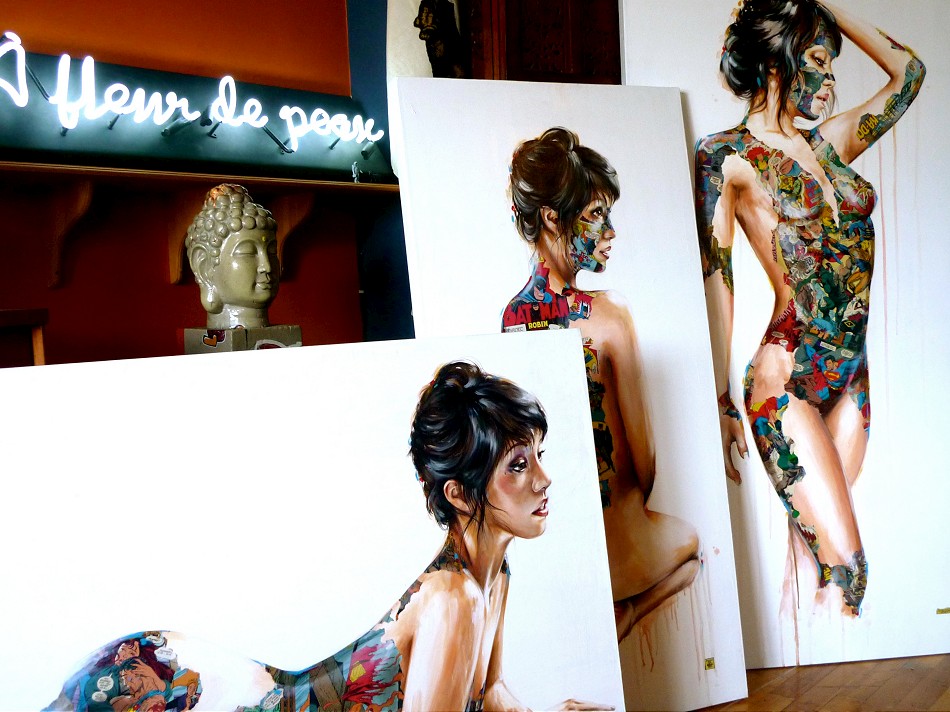 AM: So this is where connection with superhero comics comes from?

SC: There is also a certain melancholy in these different faces as if these women experienced a situation that they did not wish. As if they were “slaves.” An offset of American comics, synonymous to entertainment and fun. This is exactly the goal of the series, a daily struggle for us all against that which is imposed by society and the very expectations we impose on ourselves. I keep myself busy in many ways; single mom, business woman, artist, the household, romance, errands. It puts a lot on one’s shoulders. We overwork ourselves. We are all slaves to something, of something. And in comic books, despite all the playfulness of the thing itself and all the “POW BING BAM,” superheroes are also fragile. Superman, when he loses his battle against Doomsday, the image of his red cape tattered planted in the ground as a fallen flag has an intense beauty and incredible power. This is just one example among many others. We are human, men and women, and we are entitled to the flaw, the error. 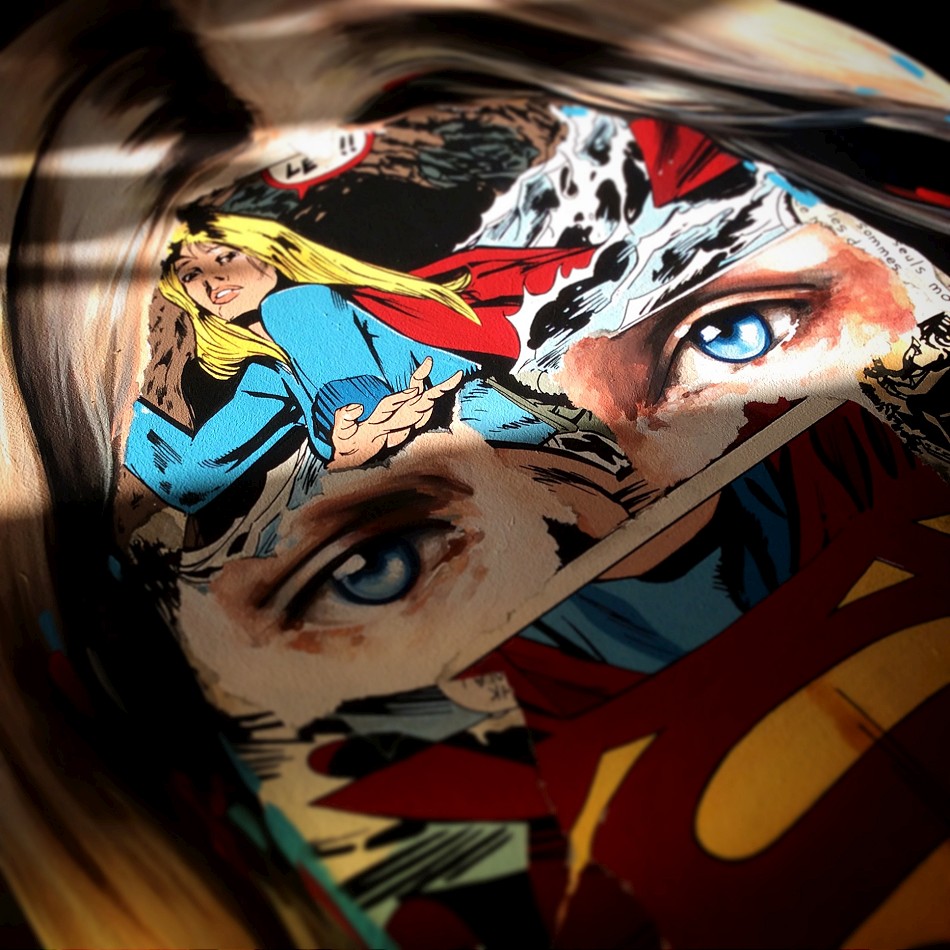 AM: How does usually a process look from a thought/idea to a finished piece?

SC: It is a bit about calculation and intuition. I choose my models selectively, I sketch, I predetermine my collage images, and I determine beforehand whether a piece is just a face, a full body, a work on paper or canvas etc. The rest just happens as it happens. I suppose you could say the work itself tells me in which direction it should move.

AM: You’re creating a lot of portraits, who are you basing these on?

SC: I did a ‘’model wanted’’ post on social media asking people to send me pictures of themselves. They are the ones that I “cage.” I also have models with whom I’ve worked for years. Ginzilla is a great example – she is a “suicide girl” and she’s been sending me amazing pictures. I love her eyes, her expressions and her charms.

AM: So you have characters that keep coming back in your works?

SC: Sometimes, I obscure different features of the same model that I use multiple times (i.e. the same model who once had their mouth obscured could later be used in a different piece and have only the eyes obscured). I suppose it depends on my mood or my own energy. One thing that is for certain is that people tend to care more about something when they know it has been obscured. 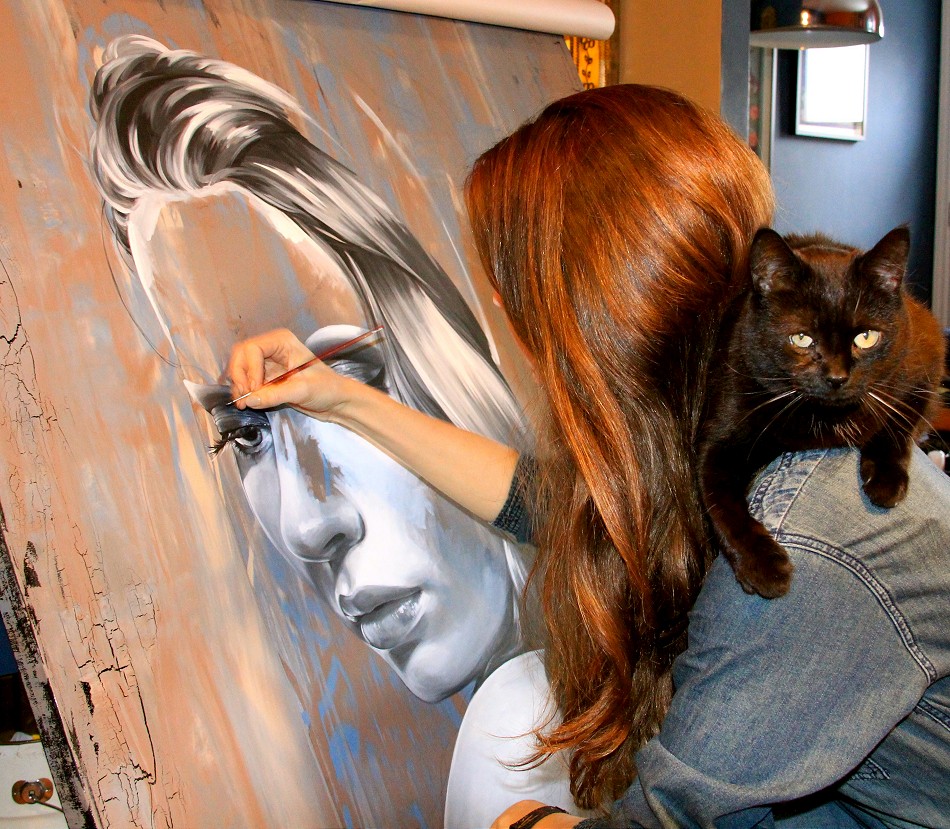 AM: What are the mediums you are using and which ones do you prefer?

AM: Why do you find it so interesting?

SC: The results are always a surprise. You can control it, but not totally. I love to watch the colors dance with the water. It is a very “expressive” material.

AM: What is the connection with comics, how did that start and which ones do you prefer using?

SC: Cages started when I was doing crafts with my (then) 2 year old son. I found an old sketch of a woman’s portrait and passed over it with heavy textures of dollar store toll paints. I found the result very striking and thus the very humble beginning to a lengthy series. The transition to comic book collage happened upon embarking on a DIY home project. I had an old, small and cheap IKEA dresser that I had planned to cover in comic book collage, not long after planning this small home project, the dresser broke. So I was left with a broken piece of furniture and dozens of copies of comic books that I had picked up at a nearby flea market, so I put them to use, and thus the comic book cage series. 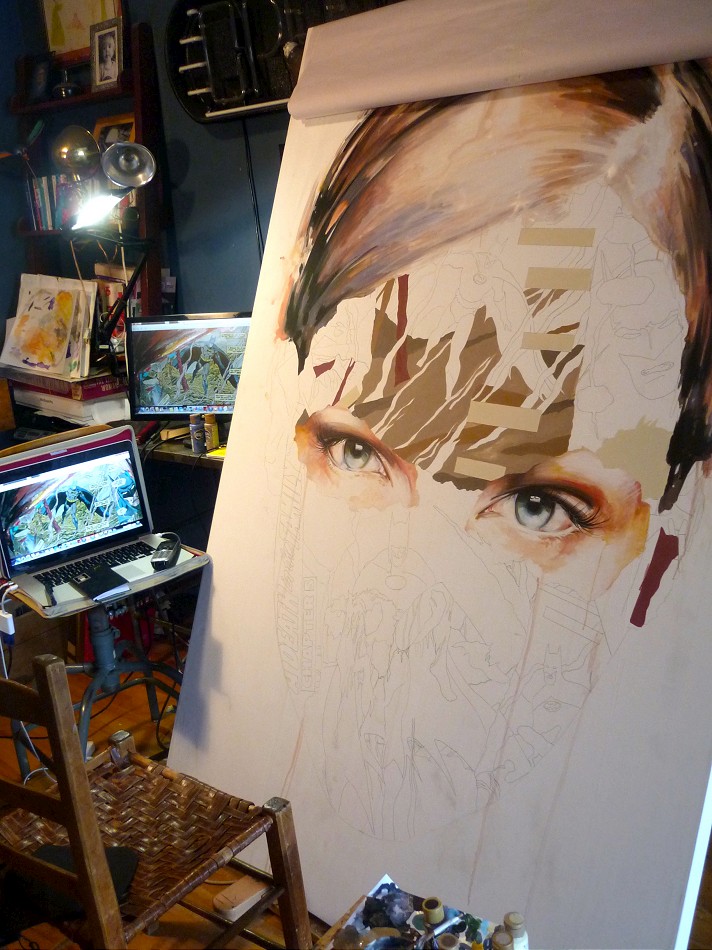 AM: Do the collage parts also tell a story?

SC: The death of Superman and the Batman graphic novel “A death in the family”. They both portray a human side to the super-human characters, a weakness, rendering them as those whom the rest of us can relate to. Seeing Superman lay helpless in Lois Lane’s arms or an image of Batman in tears while his protegee lays motionless has an incredible impact given the feats that these men accomplish in their respective stories.

AM: How do you pick the parts you’re using?

AM: Did you ever create any works in other mediums?

SC: I use many different mediums, but I’ve always stayed with the 2D though. I really appreciate photography also.

AM: Do you have a big dream project you would like to work on?

SC: For the moment, I am working on my production for a show at Jonathan LeVine Gallery in June/July. I will admit this was a goal, a dream. I am very motivated and decided to create these new pieces all hand-painted. It was the purpose from the beginning – making the collage as studies to eventually do them all hand painted on canvas, but the series was an immediate success and time was becoming an issue. Also, people love mixed media. 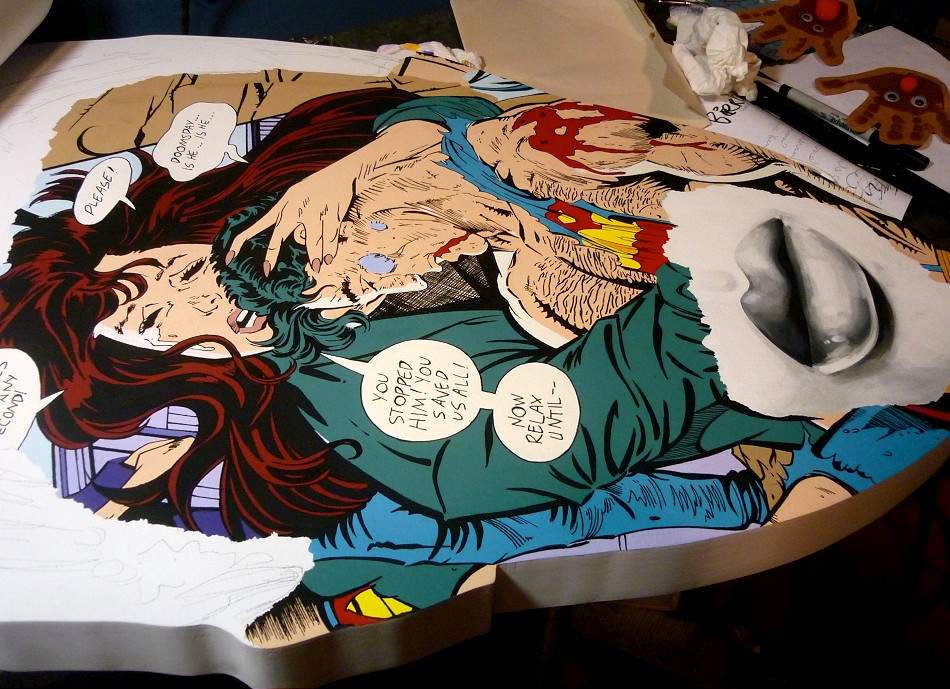 AM: What were your personal highlights in 2014?

SC: So many, 2014 was a fabulous year. Life is good to me. I traveled a lot, got to meet some amazing artists and art passionate people that are now friends. I might say that Swizz Beatz and Alicia Keys’ interest in my work was surreal. They are very generous people and they helped me a lot. Looking forward to continue working with them. Also, my partner Jean-Pascal Fournier opened a gallery in Montreal so I can have my own place to show in my hometown. 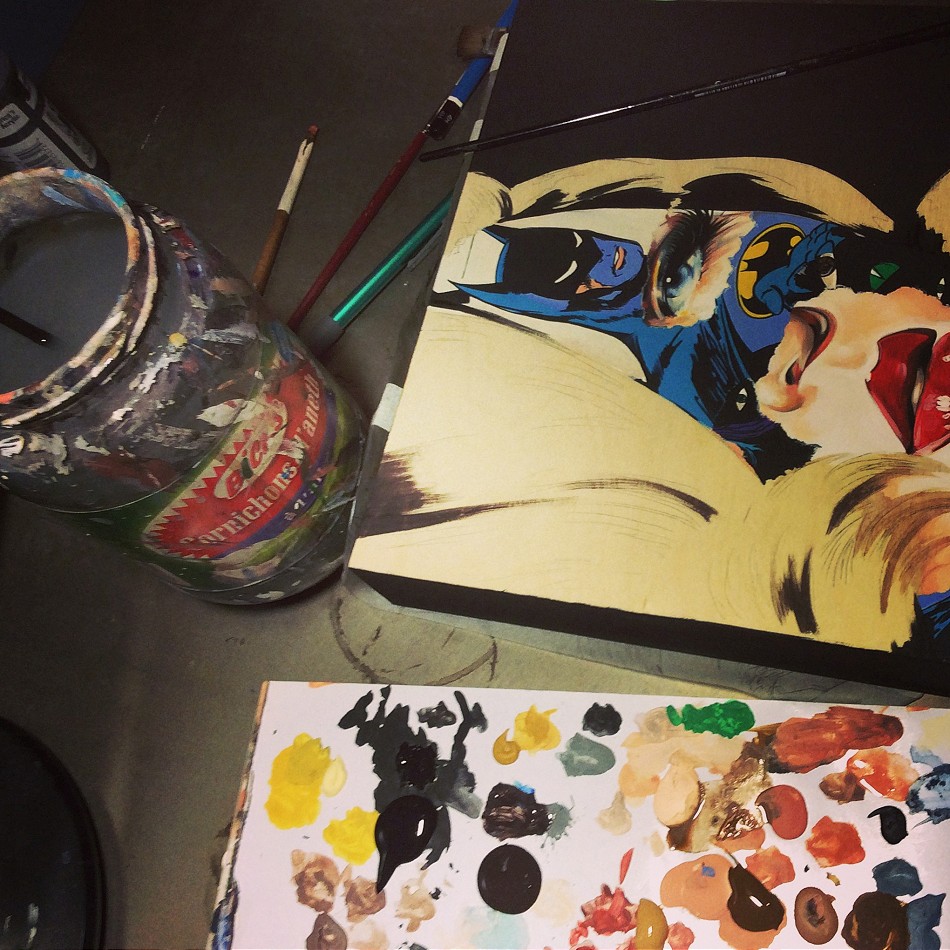 AM: What are your plans for 2015 and what kind of work will you be showing this year and where?

SC: As mentioned before, I am presently working on the Jonathan LeVine show curated by Yasha Young, opening on June 27th. Also, I’m painting for Scope NY and many group shows. For example, the piece I did for Castor Gallery demands to be dissected beyond it’s surface value, the black and white collages surrounding two wondering aesthetically beautiful eyes are quite literally torn between the fantastical heroics and iconography of comic books and the harsher underlying tragedy of oppressed female identity and the exposed superficial illusion therein. The subject denounces the role given to the female counterpart therein, refusing to play the part of seducer or victim. 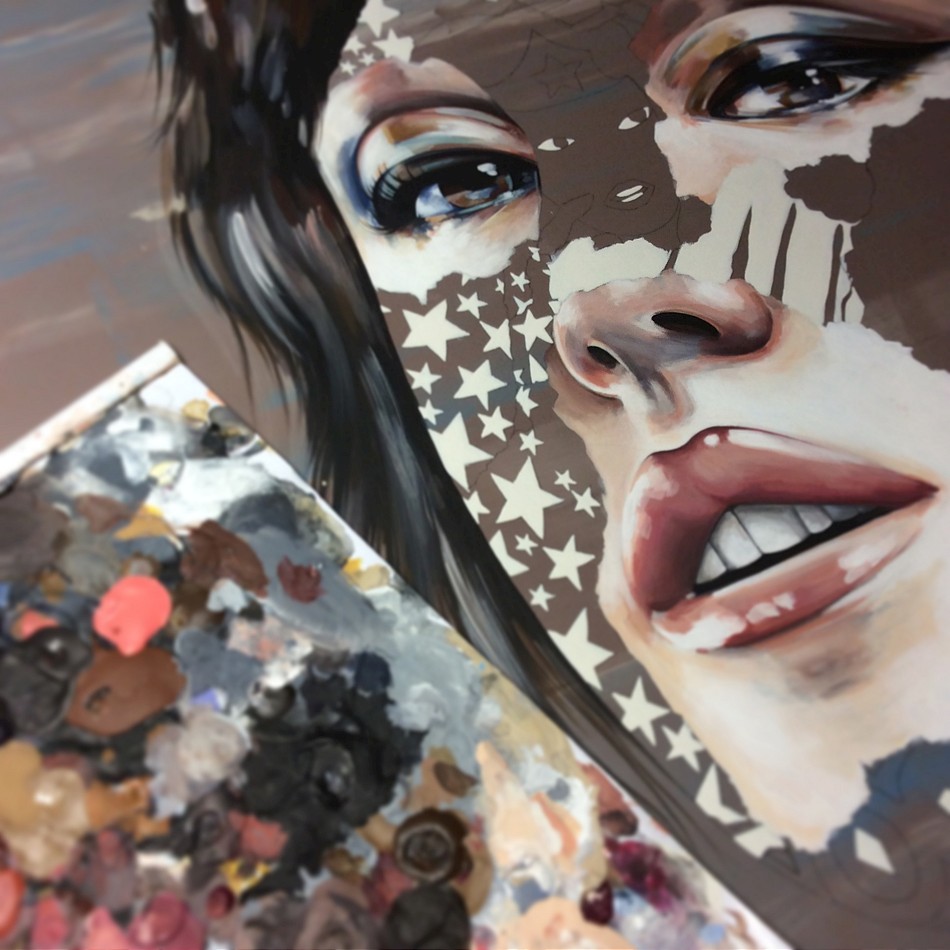