After spending some time with the Belgium-based ROA in Hawaii last month (covered), we followed up recently with a visit inside his studio as he was busy preparing for his solo with Jonathan LeVine Gallery entitled Metazoa at their 529 West 20th Street location. The work for the show was being created during a residency at Mana Contemporary in Jersey City with plans also to paint a mural at a Mana-owned building located near the approach to the Holland Tunnel (more on this later). Along with shots of the prolific artist at work, we can also share an interview we conducted with him that will keep you in the right mood for opening night on April 4th. See you there! 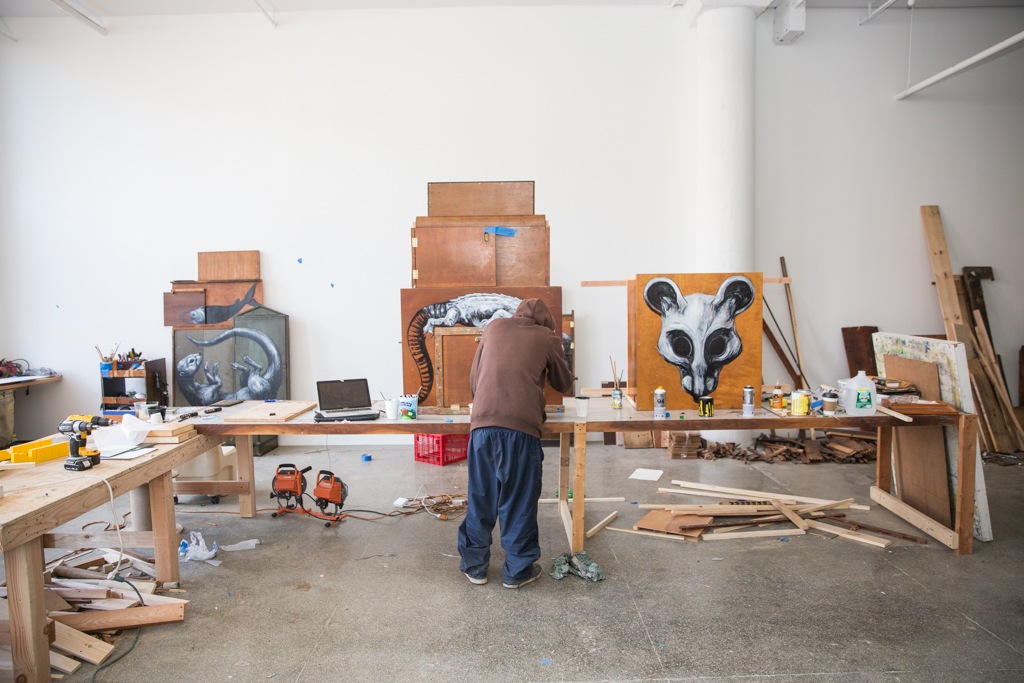 Arrested Motion (AM): Can you tell us a little about your upcoming show entitled Metazoa at Jonathan LeVine Gallery?

ROA: I am preparing the works in a studio at MANA Contemporary, in Jersey City. MANA is a converted old tobacco factory and the buildings echo the roaring Industrial Age of New Jersey. At my arrival a few weeks ago, they offered me an empty, huge studio that has since been transformed into a furnished atelier. Starting from scratch: making my own worktables, installing a turntable spot, grabbing chairs along the road and of course gathering and organizing the materials that I found in NJ and NY – the space got equipped pretty fast. Because most of the year I am traveling as a muralist, I don’t have a permanent studio, thus all works are made the weeks before the show takes place. The situation and context, similar to my murals, affect in a big amount the outcome of the work. Nothing is planned before, it’s a total surrender of conditions and situations. Thus it’s always a struggle with the given conditions and time. But that’s keeps me naturally and automatically rethinking my new works. The installation of the show will happen the last days at Jonathan LeVine Gallery in NY. Metazoa means literally the animal kingdom and the metamorphosis of an animal’s life. 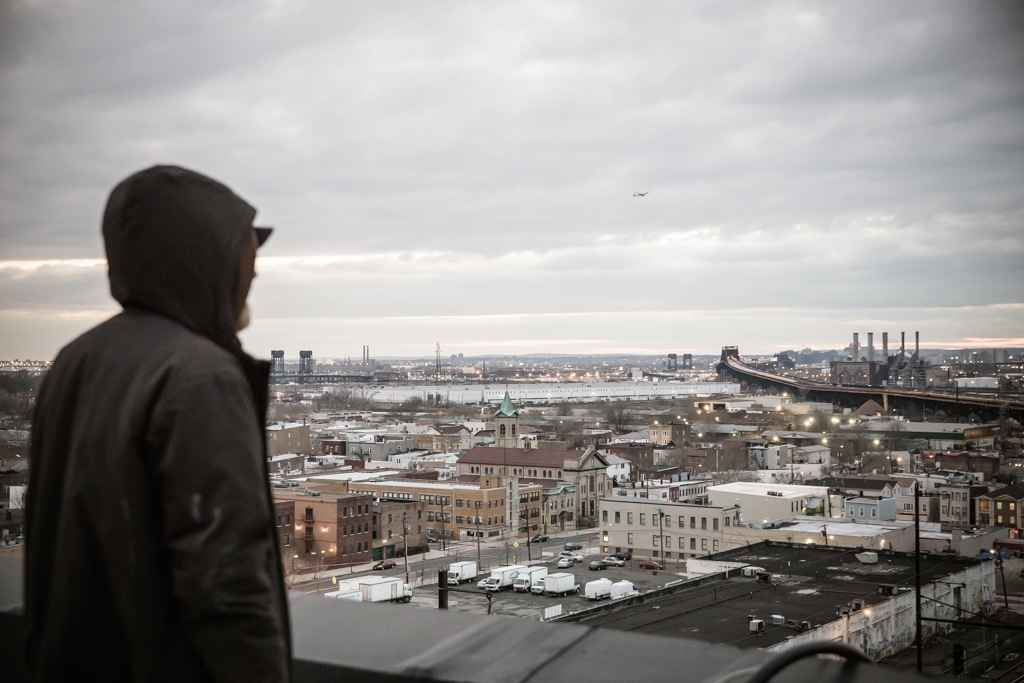 AM: You have mentioned in the past that New York City is your favorite place to paint because of its history and the large walls available. Fast forward five years since those thoughts were shared and with more extensive traveling, can you still say it’s your favorite or have the intervening experiences you’ve had changed your mind?

ROA: NYC is the cradle of graffiti and its significance has been shared all over. NYC is definitely a magic place to visit, for so many good things… Since I am here, I extended my record collection with at least 200 records, all of my most wanted ones for very low prices… Yeah NY, NY… Brooklyn, Bronx, Queens and Staten Island. From the Battery to the top of Manhattan.  Asian, Middle Eastern, Latin , Black, White, New York you make it happen – and Jersey too. 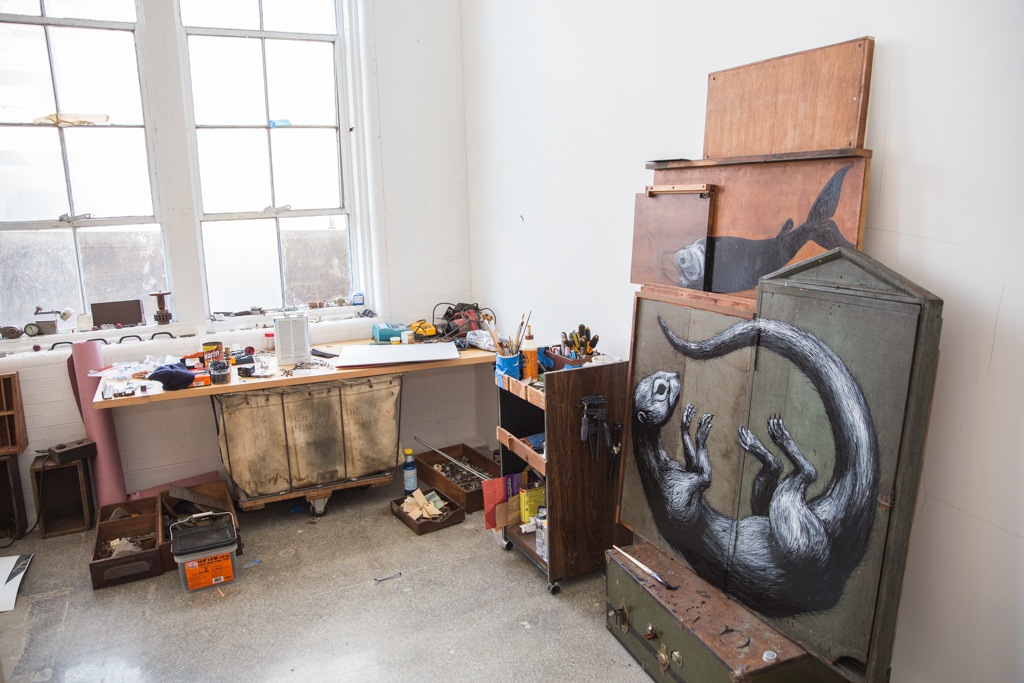 AM: Speaking of traveling – any places you haven’t gone to that you think would be a interesting or desirable location for you to paint at in the future.

ROA: That’s a hypothetical question. I truly believe that every place has its own original and genuine aspects. In Europe, I would think Iceland, in US New Orleans, in South America Uruguay… Darwin, Australia… and then I want to see much more about Asia, Africa and the Middle East.

AM: One of the elements of your work that we find most interesting are the movable panels or interactive nature of your work where the anatomy of your subjects may be revealed depending on how the artwork is positioned. This is an ingenious way to translate some of the dissected imagery you paint on the streets to the gallery setting. How did you come up with the idea? Was there a particular illuminating moment where this way of working came to you?

ROA: I consider my works as installations rather than as a canvas. From my first solo in Paris in 2010, I was already experimenting with the interactivity of my work. For me, when I would exhibit, I felt it should be something relevant for myself, and not just a small copy of my murals on a canvas. In murals too, I use the context and the architecture of the location. Sometimes (un)consciously not only the material of the place I am working on, but also the architecture inspires me for the form of the works. The contextual dimension plays a big part in my process in my murals as well as the gallery work. 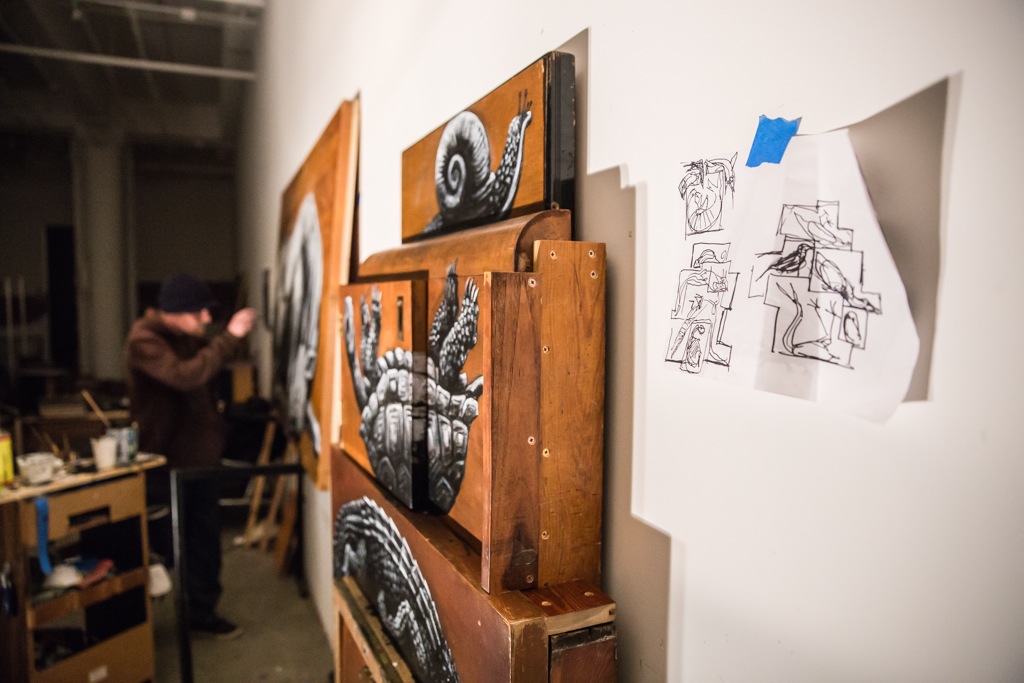 AM: From what we understand, as part of your usual routine for your street pieces, you usually chose local fauna to paint based on the country and region you are working in. Have you ever deviated from this philosophy? If so, for what reason? If not, can you envision a situation where this would be an interesting choice or necessary?

ROA: It’s definitely true that I choose the native fauna as the subject of murals and exhibitions, but there have been also walls that refer to extinct species or to legends, but rarely I will choose to abandon that idea of painting the surrounding local mammals. Recently in 2014 in Rome, I made an exhibition showing mostly exotic animals, referring to the ancient Roman times where giraffes, rhinoceros, antelopes en masse were transported to Europe to be killed in the circus arenas, but at the same time also referring to the animal trafficking nowadays. It was a choice to not paint the city icon – the Wolf in Roma – like I did a few months before. Both inspired by the history of the city, but both different. 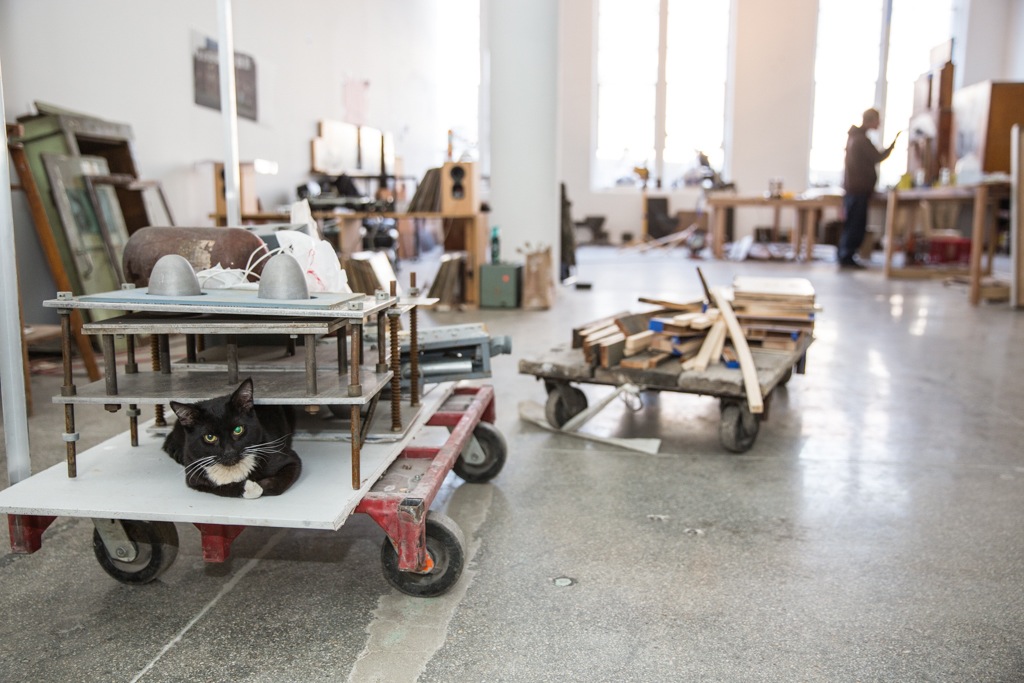 AM: You always seem to utilize found materials for your installations as well as to paint on. How do you source these and any interesting stories of how you acquired some of these items?

ROA: Mostly, it’s picking up items from anywhere: from scrapyards, dumpster diving, abandoned warehouses, to thrift stores. The materials for Metazoa are collected from Brooklyn, NY and NJ. In Newark, we have been exploring the abandoned Proctors theatre; an amazing site of theatre history, but almost impossible to take stuff out of there, you have to jump off roofs, crawl through windows, climb fire stairs – A Goonies experience that yielded me some props from the projection rooms and some mirrors from the dressing room.

The first night of my arrival in Jersey City, my friend and I were wandering around the industrial site of MANA and we find a huge amount of wood. Dismantled structures of MANA’s factory past had been left there to be picked up. All the green wooden panels in the show are the thrown out wood found from that night. Beautiful hard wood, remnants of the lumber industry – old-growth forest wood that been chopped and led to lost territory for many species. Since last week, I am cat sitting and he’s been full time occupied with sniffing around the materials. 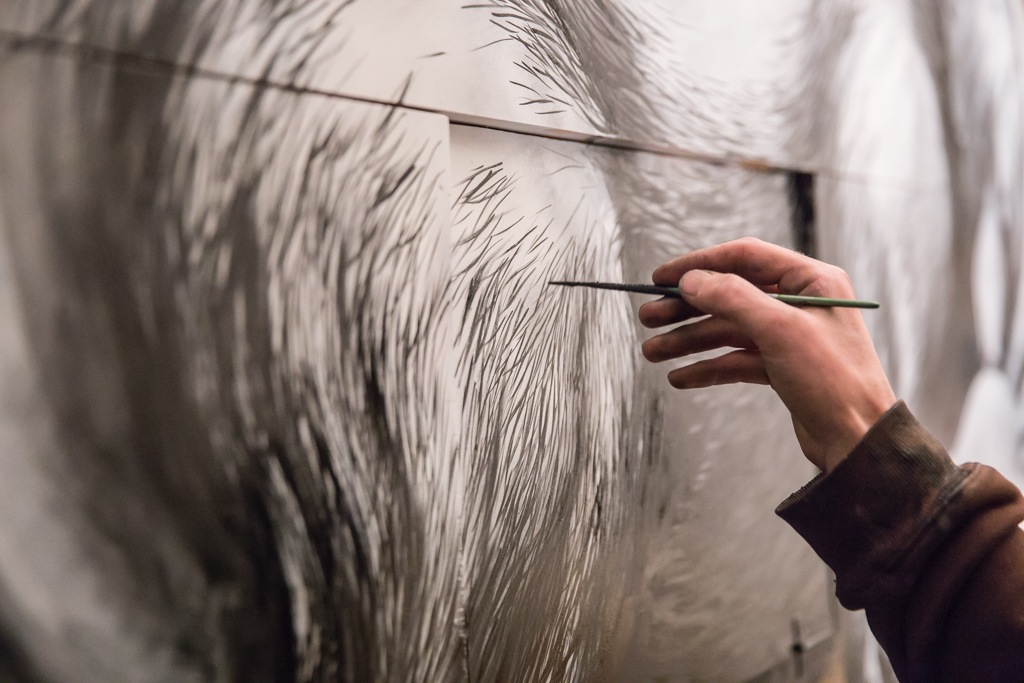 AM: Oftentimes, your exhibitions are partially set up like a laboratory where various paraphernalia are arranged surrounding your artwork, a natural extension of the anatomic depictions seen in your pieces. Do you have a background in science or just some special love for these wonderfully replicated scientific settings.

ROA: A laboratory is a place of research. It also alludes on the history of classical biology and science, and the conquests of the colonization times.

AM: We were able to watch you work a little while you were in town for POW! WOW! Hawaii. Any thoughts on your experiences there – the food, culture, people, massive amounts of artists?

ROA: POW! WOW! was crazy crowded, but you don’t hear me complaining. It was nice, and I finally got to swim with sharks. Olek and I went shark swimming and we both survived! 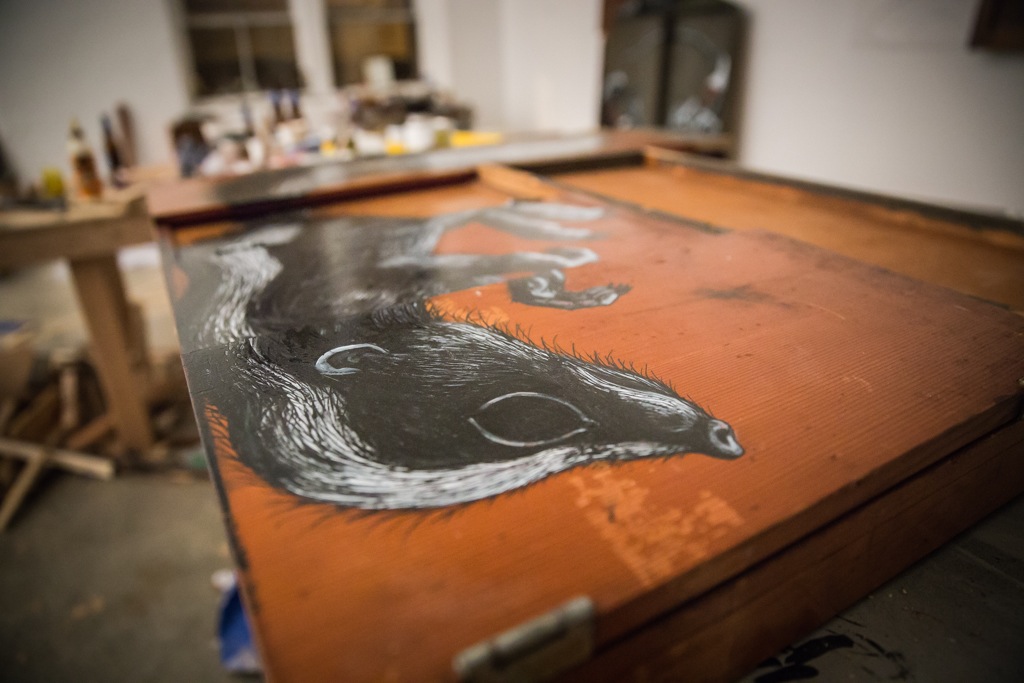 AM: What do you think of the unique nature of some of these events like POW! WOW! Hawaii or in Miami during Art Basel week where some walls are constantly painted, photographed, repainted on a yearly basis? Or even something like the Le Mur wall in France or Houston Bowery wall in New York?

ROA: Interesting question… I’ve done so far Miami, POW! WOW! and Le Mur. Unfortunately, I didn’t get an offer for the Houston Bowery wall, which is the most historical.

The first time in Miami, we had to rent a cheap motel near Biscayne Blvd. The guys of Primary Flight fixed me a large wall across the store “Art by God, Nature’s Art and Earth’s Wonders” – this wall was painted over a few years later again, but that’s the ephemerality that used to be a common thing in graffiti. This year, I skipped it like I did two years ago because of some arguable aspects like the whole media circus, the extensive branding and debatable respect to the place itself and to the local artists. Furthermore, I don’t want to ‘claim’ my wall in a rat race with fellow painters. I definitely can’t deny I always feel temped to go to see my friends, as a sort of an annual reunion, but I will only return if I have a good reason to go. Le Mur invited me for their edition 100. I thought it was a honor and I knew it was a project for one month in Rue Oberkampf, a street where I used to rent a cheap room when I went to Paris, so again things personally came together. Le Mur is actually run very well. POW! WOW! Hawaii was great but hectic!

The past years, I have been painting in a lot of festivals and the experiences been very varied. Sometimes, you’re confirmed months before a wall, and then they forgot to get you the permit, other times they forget to order the paint or lift… On the other hand, I have been in very remote places where everything was sorted out perfectly.

AM: Any future shows or projects coming up for the rest of 2015 that you can share with your fans?

ROA: I’m suppose to do a lot this year, but first things first – METAZOA. I do have a huge tower waiting for me in Denmark ready to be paint in May though. 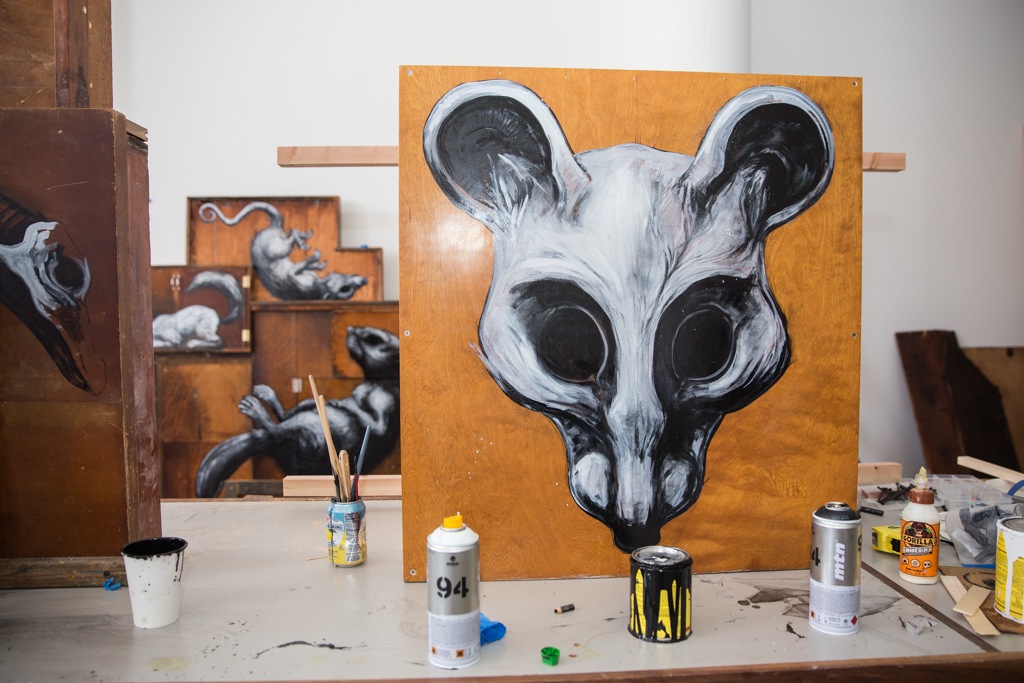 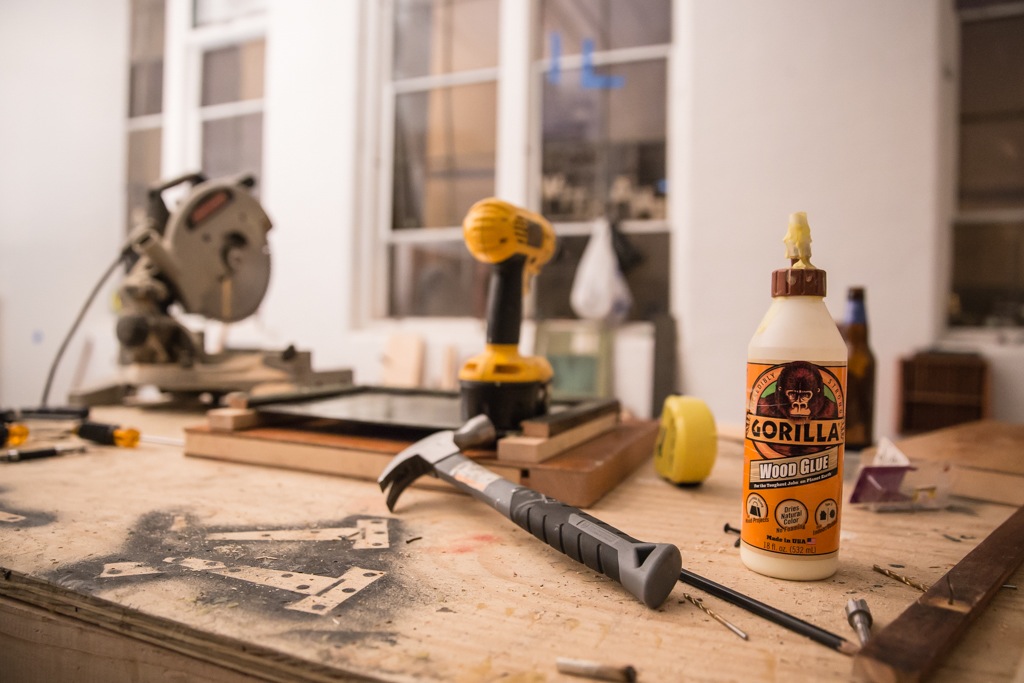 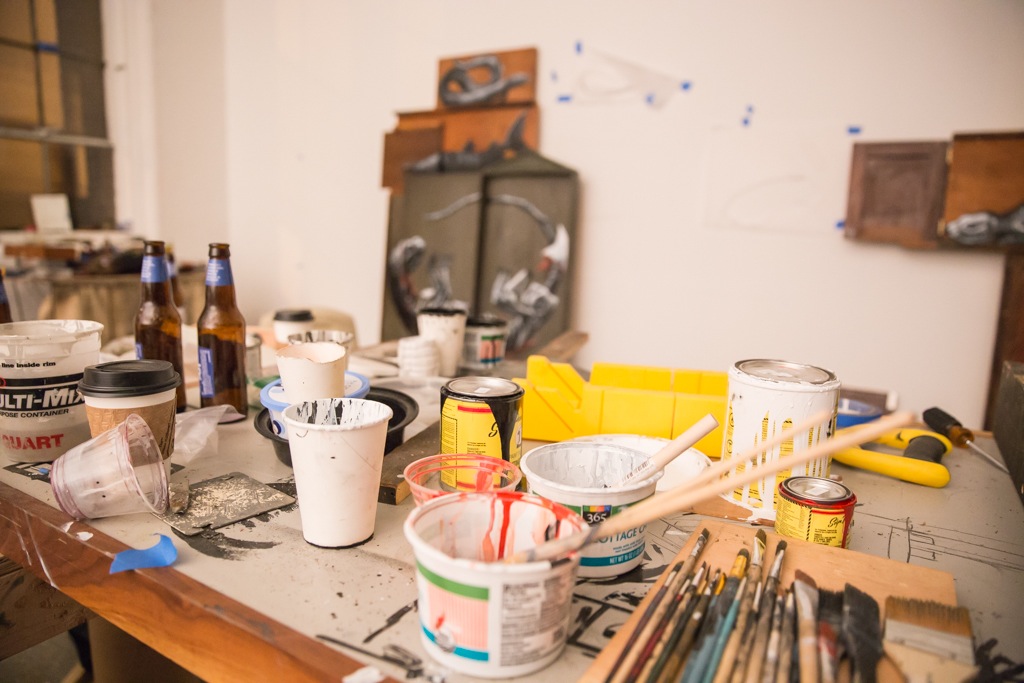 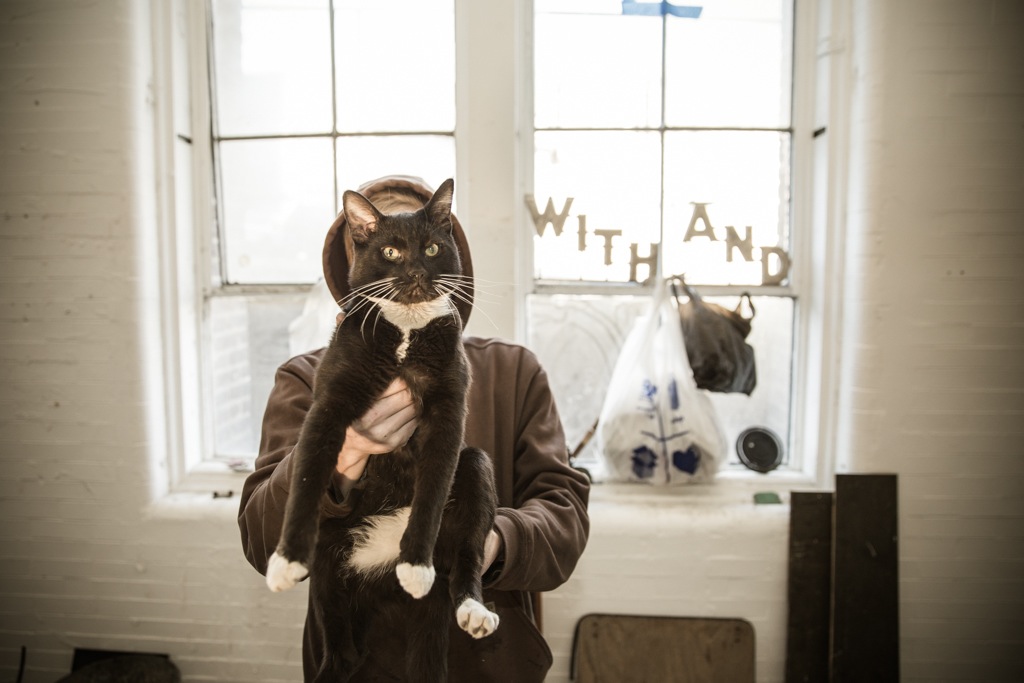 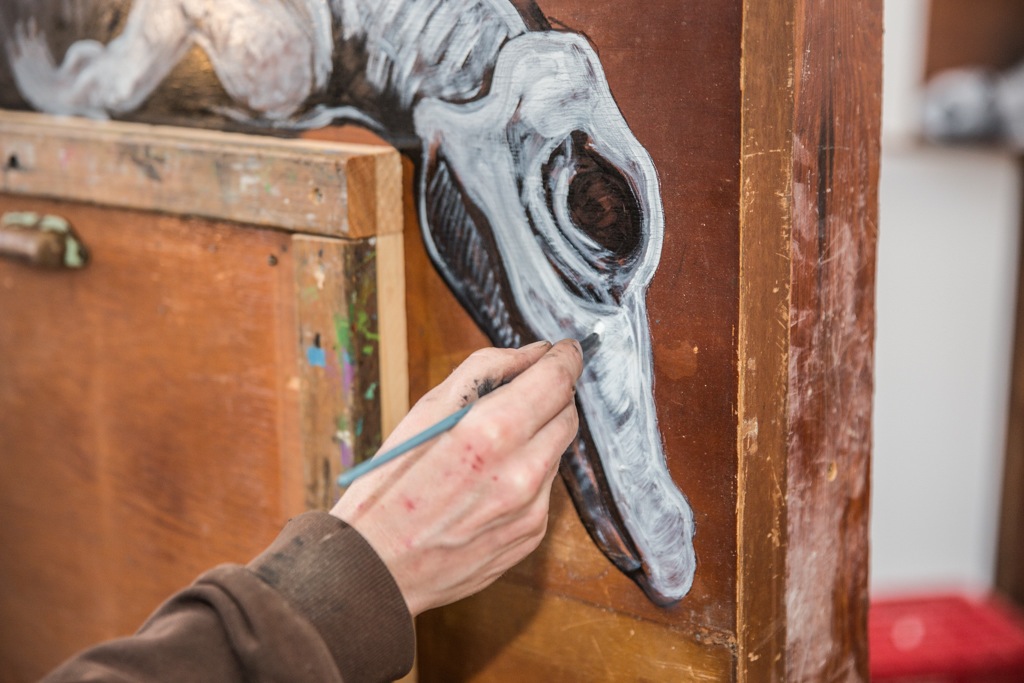 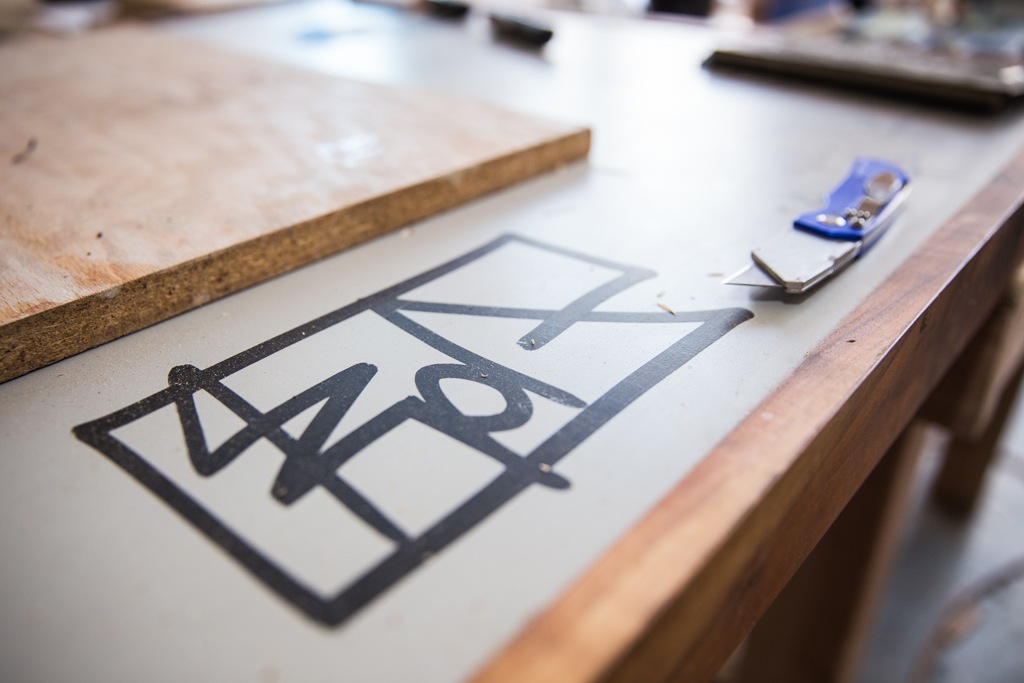 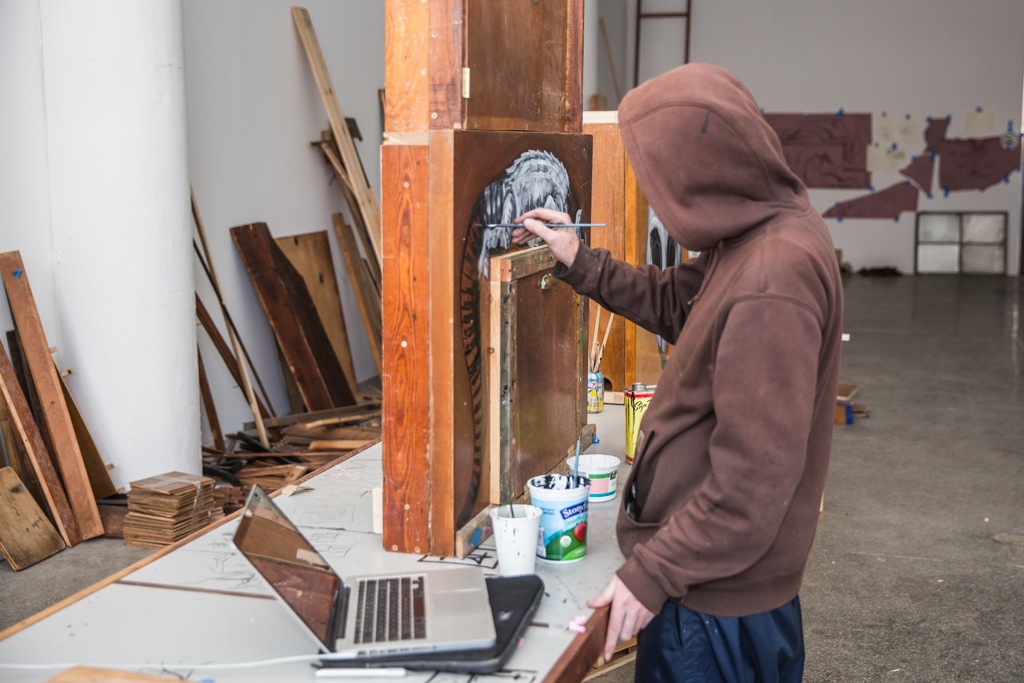 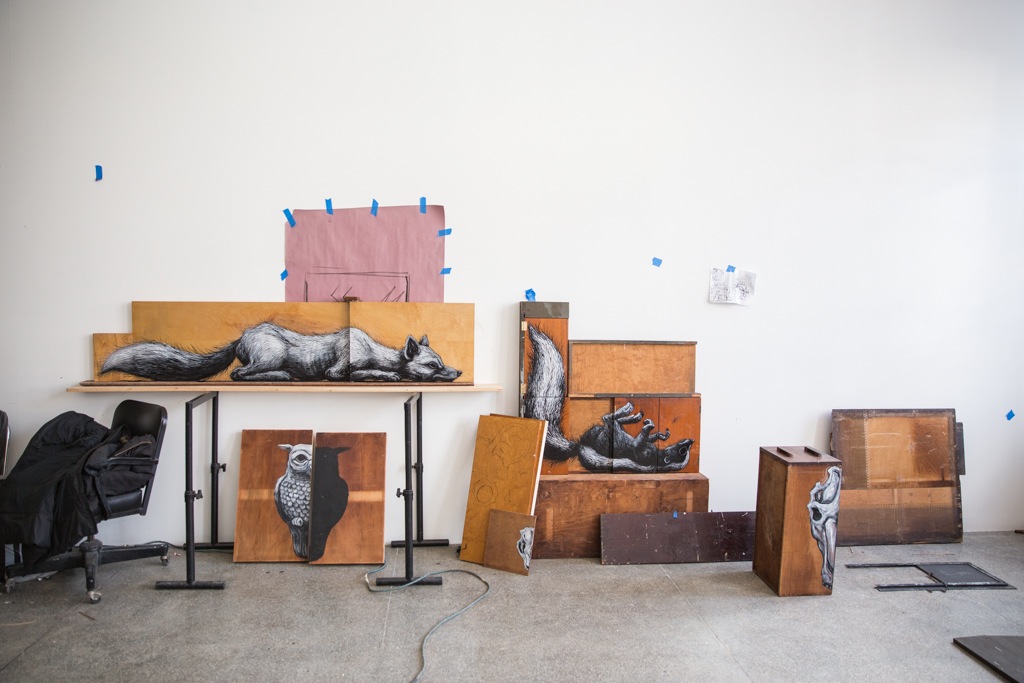 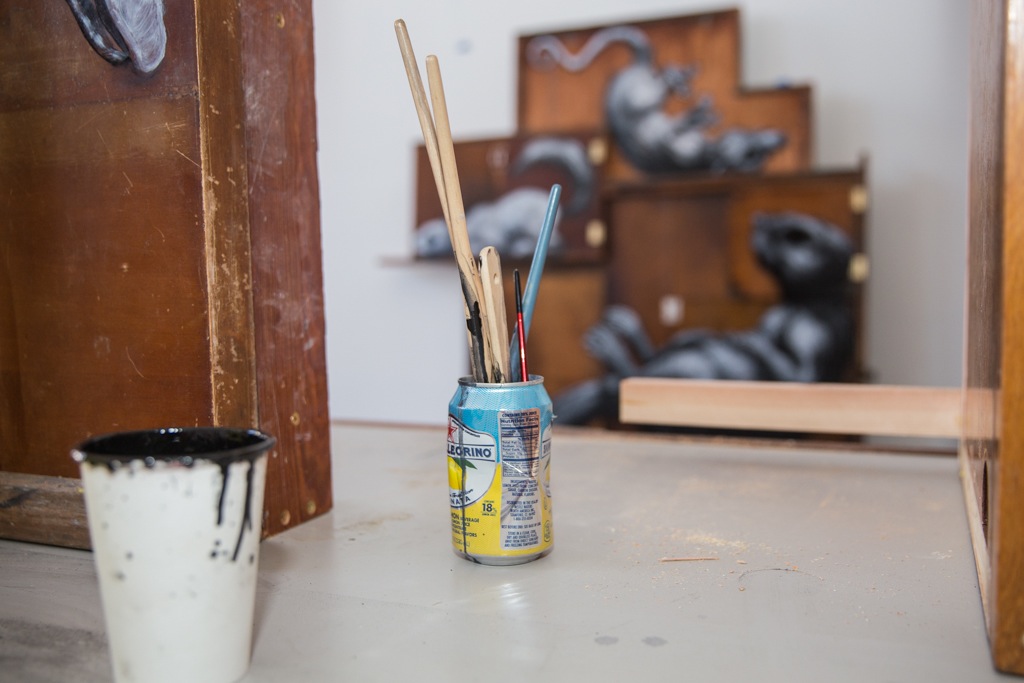 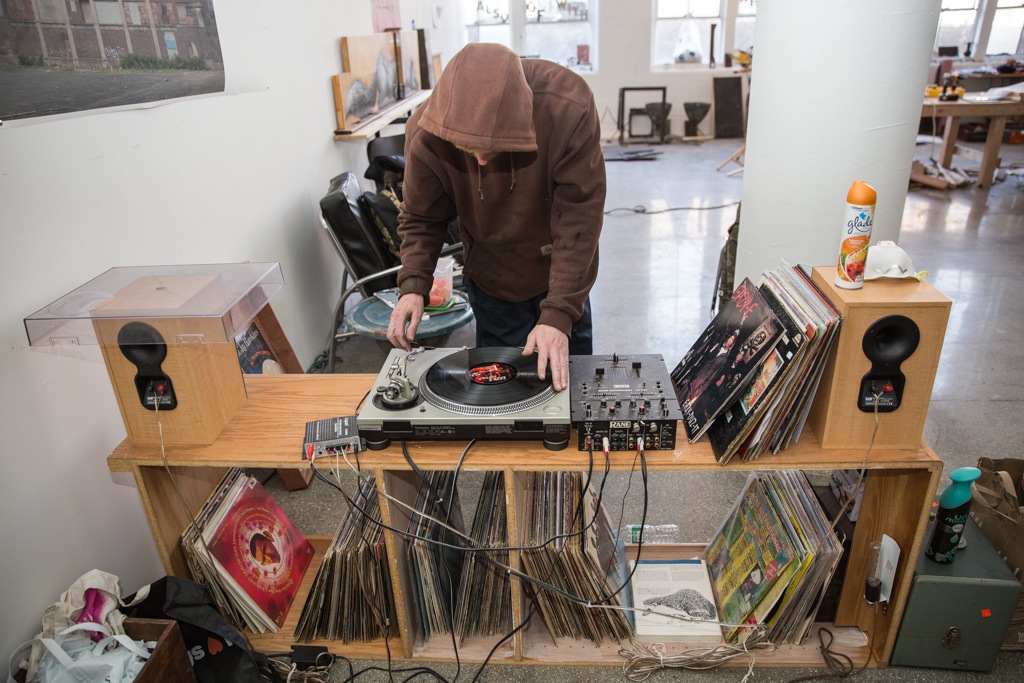