Jim Houser is currently setting up his upcoming show (previewed) entitled HUSH with Andenken / Battalion Gallery, the American artist’s first solo in Amsterdam. The gallery owner, artist and friend of AM, Hyland Mather aka X-O, used this opportunity to do a little Q&A session with Houser on our behalf. What was planned as an interview, turned into a deep and informative conversation between the two creatives, covering all kinds of subjects from skateboarding, music, traveling, family, rising kids, and last but not least, art. 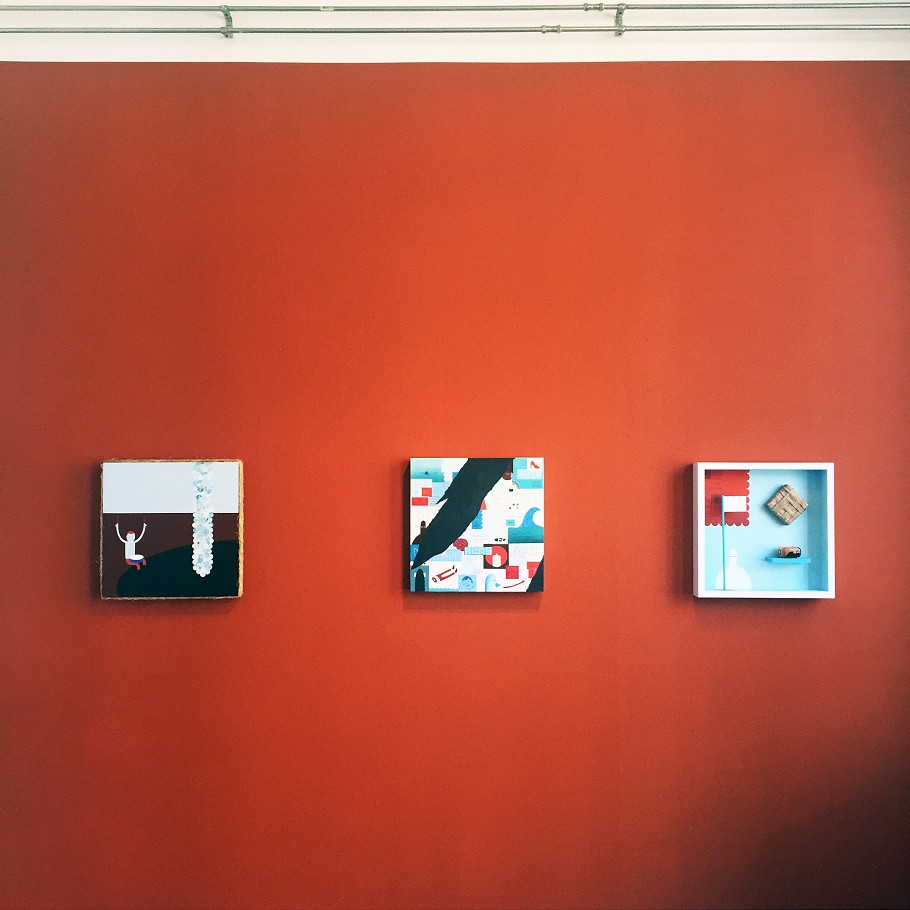 Hyland Mather (HM): Hey Jim, how’s it going? How are you liking Amsterdam?

Jim Houser (JH): Less than 24 hours in, so far so good. Traveling to new places can be stressful for me, but it seems like a pretty easy going place.

HM: Is it scary for you with all the bike riders? Lots of pretty girls on bikes huh? Tall too right?!\

JH: Yes, and the tall girls are scarier than the bicycles .

HM: I’m glad you’re here. As you’ve been a long time inspiration to me, tell me first, can you rattle off a few inspirations of your own? Art, skating, music, philosophy, makers of any kind?

JH: I like that my art making is therapeutic for me. What is inspiring to me is that it contains a problem that never completely solves itself: me. From childhood on, I’ve used art to escape my reality, to help me define or explain my reality, and to meditate on my reality. Over the last few years I have begun to focus more on how I make and use my art and to think on what that really means for me. 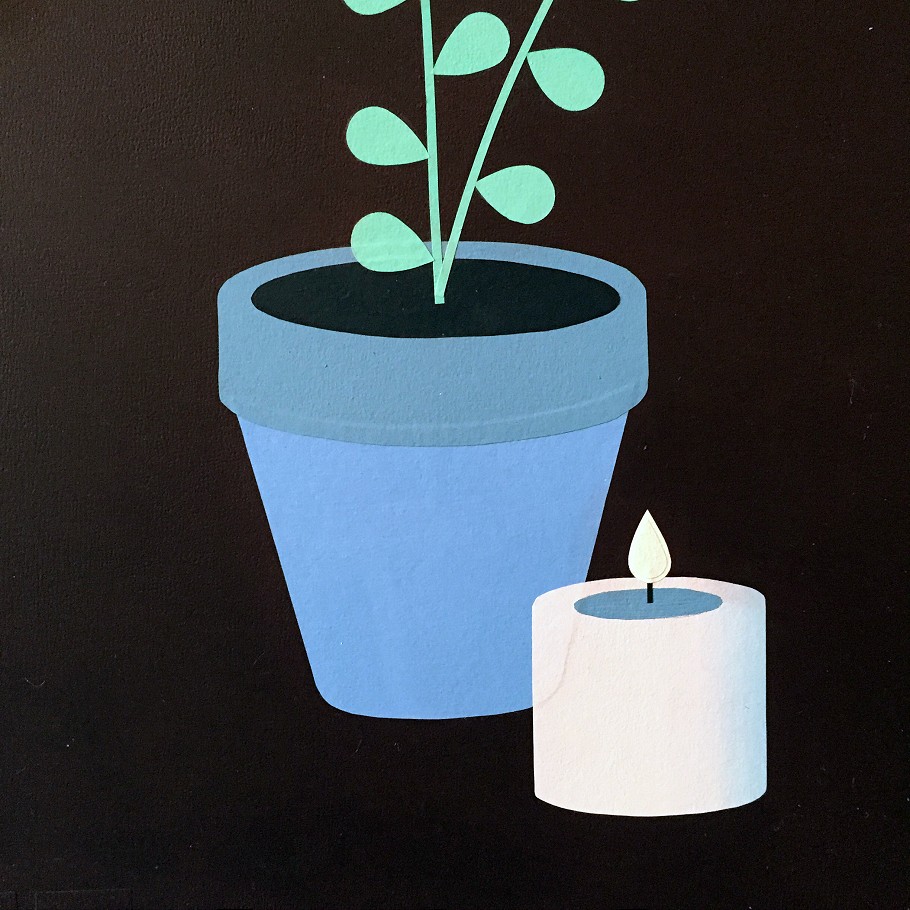 HM: You’re over here for the show HUSH, thank you for that, and I definitely have some questions straight about it, but I feel also like I’ve got gazillions of questions about other stuff, regular conversation stuff, and father to father things, anyways…  So… I feel like, you’re really into skateboarding at any part of your life, it pretty much stays in your blood forever. What’s your skateboarding strategy these days? Do you like to carve around, just watch, reminisce about the good ol days, bits of all of the above? None of the above?

JH: Other than skateboarding to the store, or cruising along while my son rides his bike, a session for me nowadays is an hour and a half. That’s a full day of skating for me. 30 mins to get loose, 30 mins feeling ok about the 5 or 6 tricks I can do, 30 mins of feeling my legs go and fighting the urge to keep going. At 42 years old, it’s a strategy that works for me, that 91st minute is usually where trouble starts.

HM: You’ve designed some iconic decks for Toy Machine over the years… Any new decks on the event horizon?

JH: Yes, I just got asked to do a series for another brand. It’s still up in the air (I had to finish the work for this show). Also, my friends have a small board brand in Philly called Spectrum. I did their first boards about a year ago, and plan to do more whenever they get around to asking me. 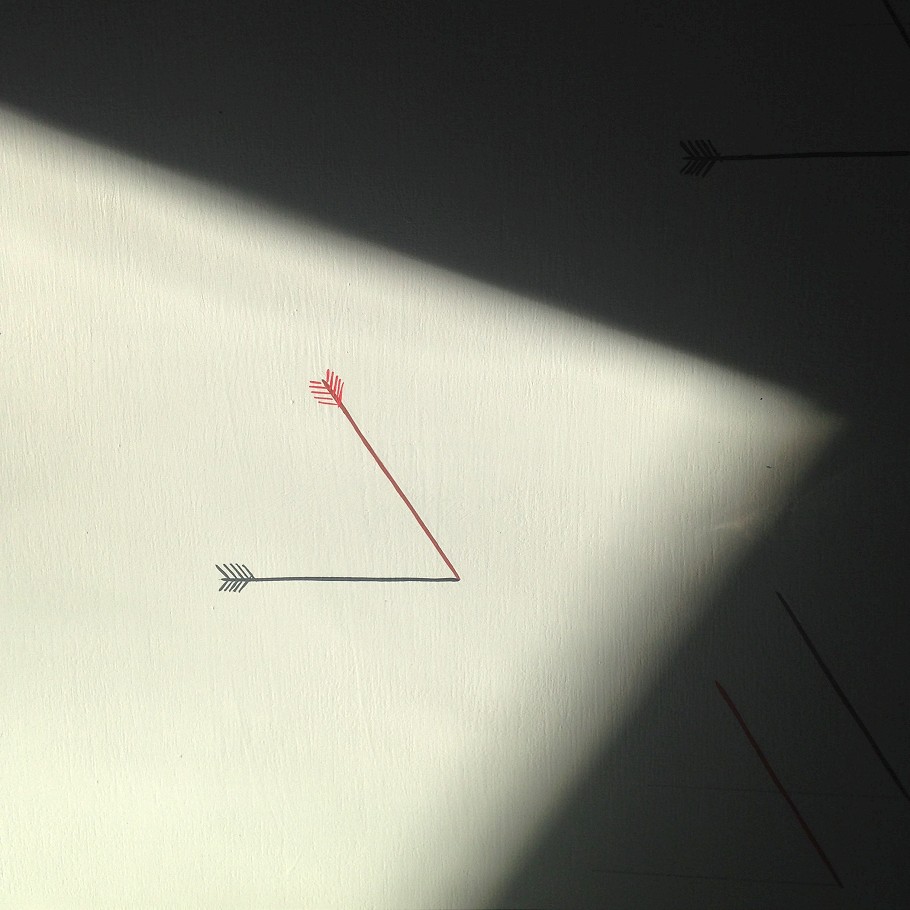 HM: My own son, Addi, doesn’t skate too much / at all, but he did make up one of the raddest games ever with a skateboard. It’s like catch… we call it ‘skateboard pass.” We just stand on a smooth patch of concrete about 50 feet apart and kick the skate back and forth. It’s hypnotic and rad and makes a super cool fssssssshhhhh sound. My point… is Seamus skating? Do you encourage it or share it with him at all?

JH: I don’t push him with it. I expose him to it, but he’s just able to ride a two wheeler bike, so he’s all about going fast and doing skids on his bike. Bu,t we watch old video parts on youtube. He likes watching vert skating.

HM: You play some music, I’ve been an enjoyer of your record from a few years ago, the Untitled ep… Available on big ol iTunes. I’ve heard you talk about the comfort you find making music as a way to combat time when the brush ain’t working. Is this still a useful escape for you? I know you’re still making music, but can we expect a follow up to your, 2010 hit 10” ep?

JH: I’d love to make another record at some point. I just haven’t really focused on making music in about year. I’ll noodle with a guitar watching TV, but thats about it. I haven’t taken an extended break from painting in what feels like forever, probably close to 2 years? It takes a big chunk of time off to really settle into playing music for me.

HM: My son and I make music as a band called… Get this… ’The Painters’ While you’re here you wanna lay down a ‘The Painters’ track with us? 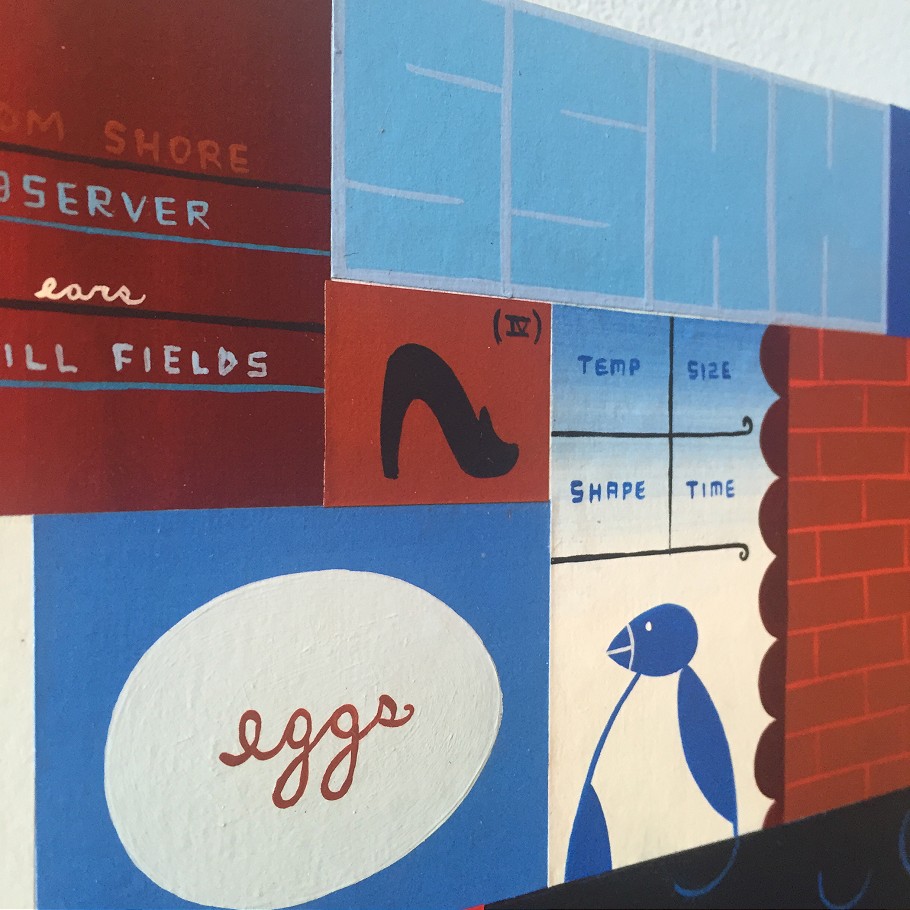 HM: Addi is actually about to go to high school… I remember you telling Andrew Jeffrey Wright once that your fear of showering with the other dudes in 8th grade is what steered you towards art classes. It’s strange to think how there is actually more ways to react to fear than just ‘fight or flight.’ You can sorta outthink fear sometimes, and in your case, we have your work as evidence of it… thankfully. Any advice to the young person who might be more prone to draw than lather up with the other lads? Or just different ways of reacting to your fears?

JH: I think that was probably a joke. I don’t know, art is a great tool for dealing with trauma, and for a kid, a thing that we as adults think of as very insignificant can be very traumatic for a kid. Their worlds are so small. I sort of lucked into it, making art. I was just as happy drawing as a kid as I was throwing rocks at cars. Anything to get out of my own head for a bit, skateboarding, taking drugs, all that stuff does the same thing to varying degrees of success, but luckily for me I was wired to have art making be the thing that quieted me down the most on the inside.

HM: This is sensitive, and I know it… Jess is the Seamus’ mother and your wife and presumably a great and awesome love in your life, but, when you got interested in Becky (Westcott), is when you got interested in painting for a large part. If you can give that love of painting to your kid, at least in part is that a way you can pass along her spirit to your children?

JH: Seamus is aware of Becky. He knows as much of the story as I feel comfortable telling a five year old about. His bedroom was her studio, and her art is all over our house. Jess has always been incredibly strong and supportive of allowing Becky’s memory to live on in our home. And the older Seamus gets, the more he’ll understand about who she was. 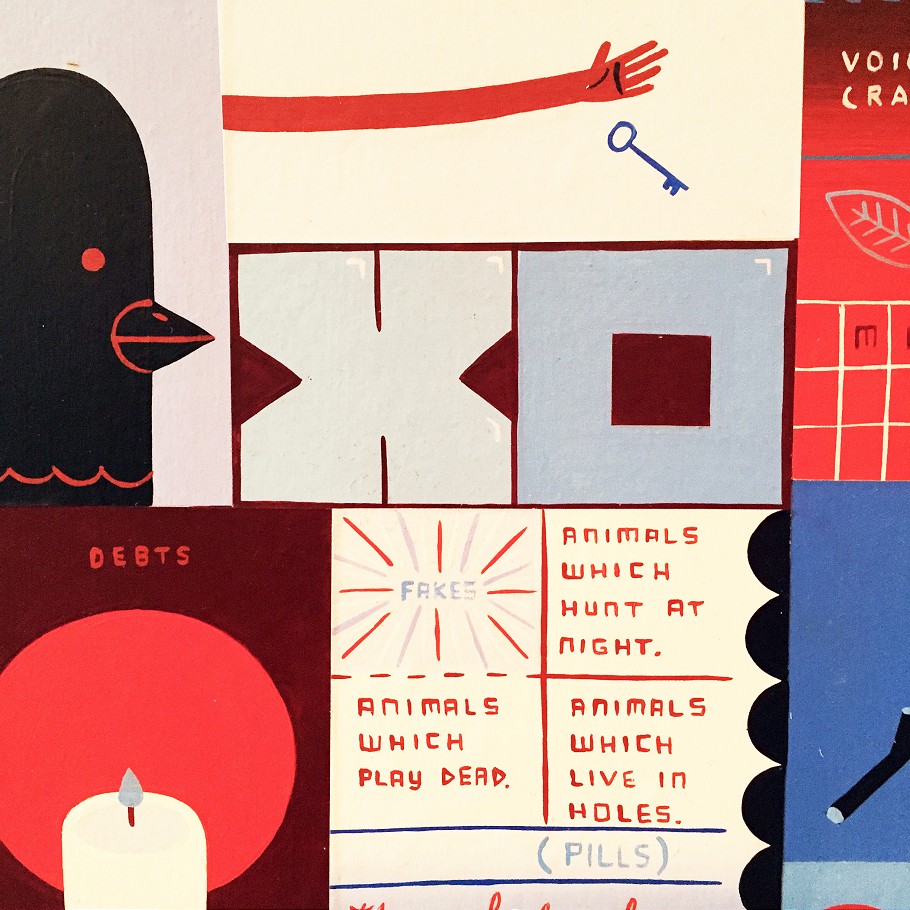 HM: So, let’s get into the show stuff. One of the things you mentioned when we talked about the themes surrounding the work for the HUSH exhibition was about ‘the gravity of fatherhood.’ I know your own father was instrumental to you, kickstarting your drawing habits in your youth… Bought you sketchbooks and stuff. How do you see your role as creative nurturer / enabler now that you’re a dad? You’ve done some collab stuff with Seamus. Is he still into that?

J- I feel like its my job to do expose him to everything. If he wants to play the violin or rock climb or play lacrosse, whatever, cool. It’s all creative and all problem solving, to me, and I try to emphasize the importance of practice, and the idea that you’ll get better at anything that you put your heart and focus into.

HM The word ‘HUSH’ has been appearing in your work for a while. I’ve heard you talk about that before, how a word can stick with your overall aesthetic the way some people keep an image in their aesthetic over long periods of time, a classic example is Shep with Andre. You actually do both. What about this word? Is it a mantra for yourself? A suggestion for others?

JH: It’s a plea to myself (and to others) to attempt to be present in the moment. It’s an incredibly difficult thing for me to do. 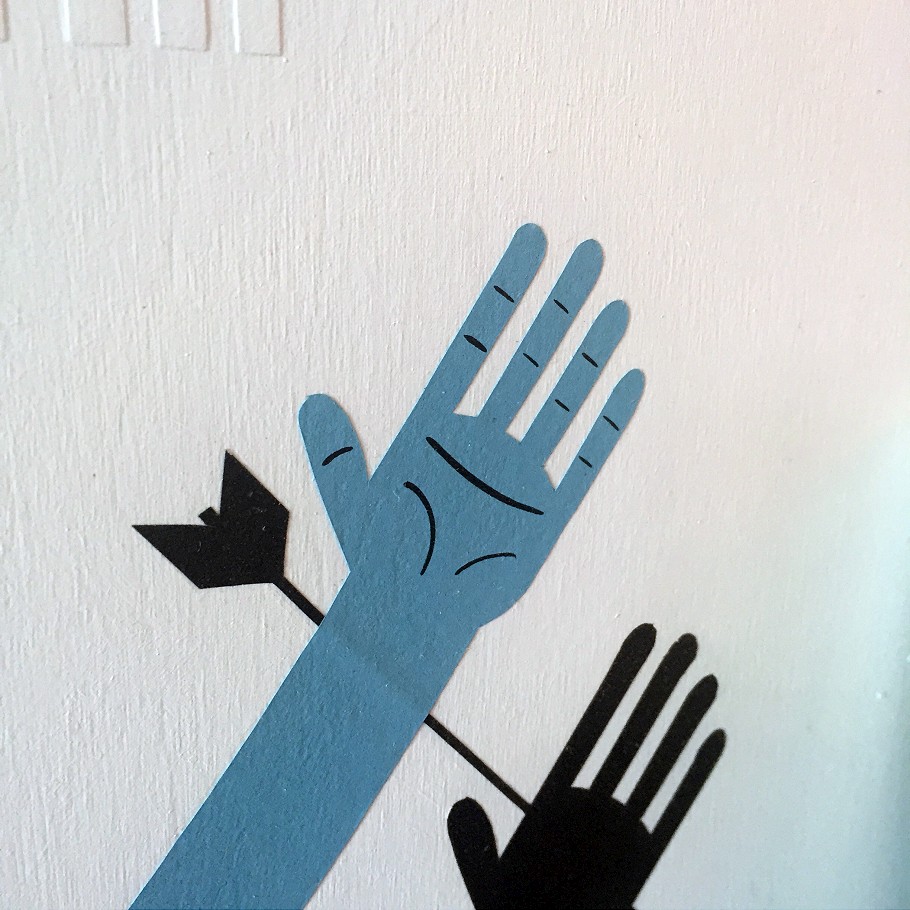 HM: It seems like you work in general with lots of dualism. Blue and Red as Water and Blood, and the idea you’ve talked about before of ‘Celebrating the Negative.’ I saw a cool venn diagram the other day on the jux instagram… I should have saved it. One large part of a circle said – Absolute Narcissism, the other side said Crippling Self-Doubt, and where they minutely intersected it said ‘art’. How often do you find yourself in the crippled camp? How are you the Narcissist?

J- Well, 50% of me feels like the type of art I make isn’t made better by anyone, ever, and the other 50% feels like its repetitive self absorbed mess that disappears up it’s own asshole. So there’s that too.

JH: Thanks for letting me come do my thing. I appreciate it. 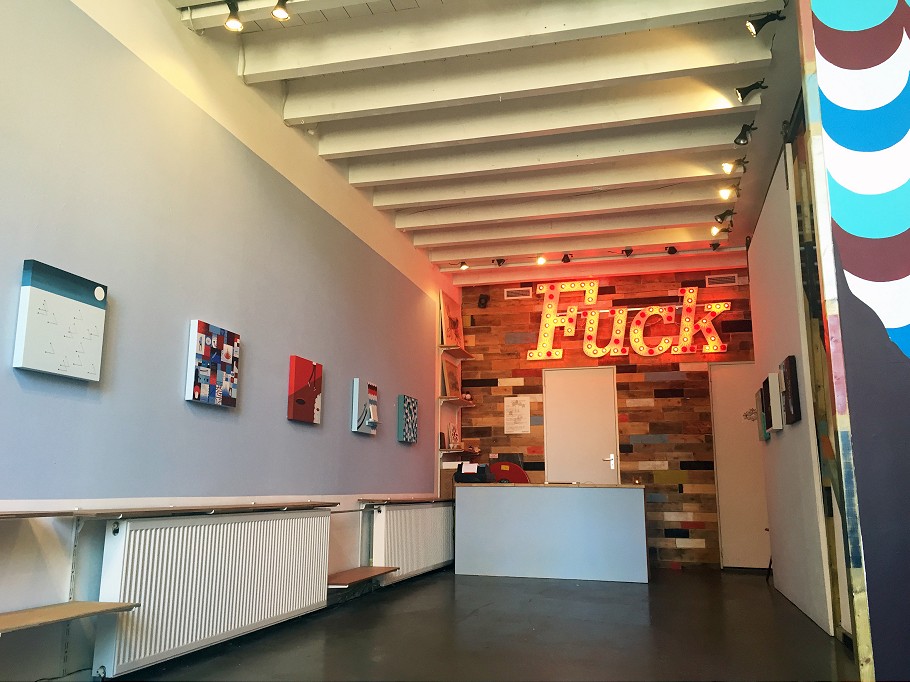 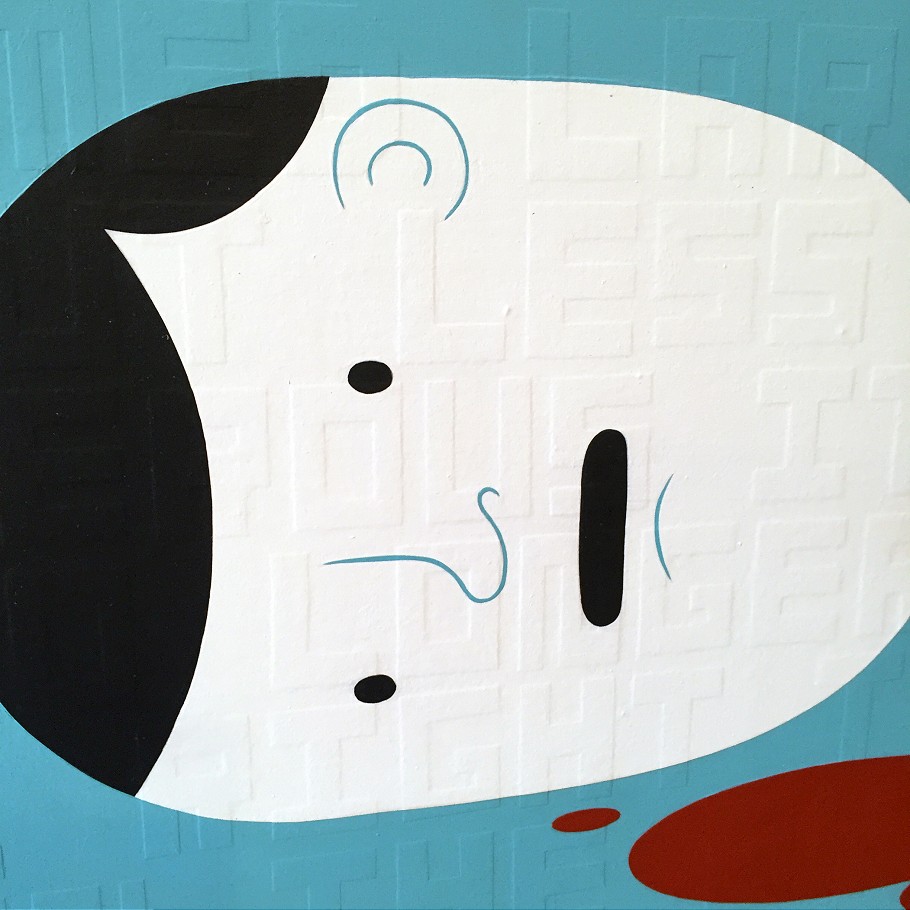 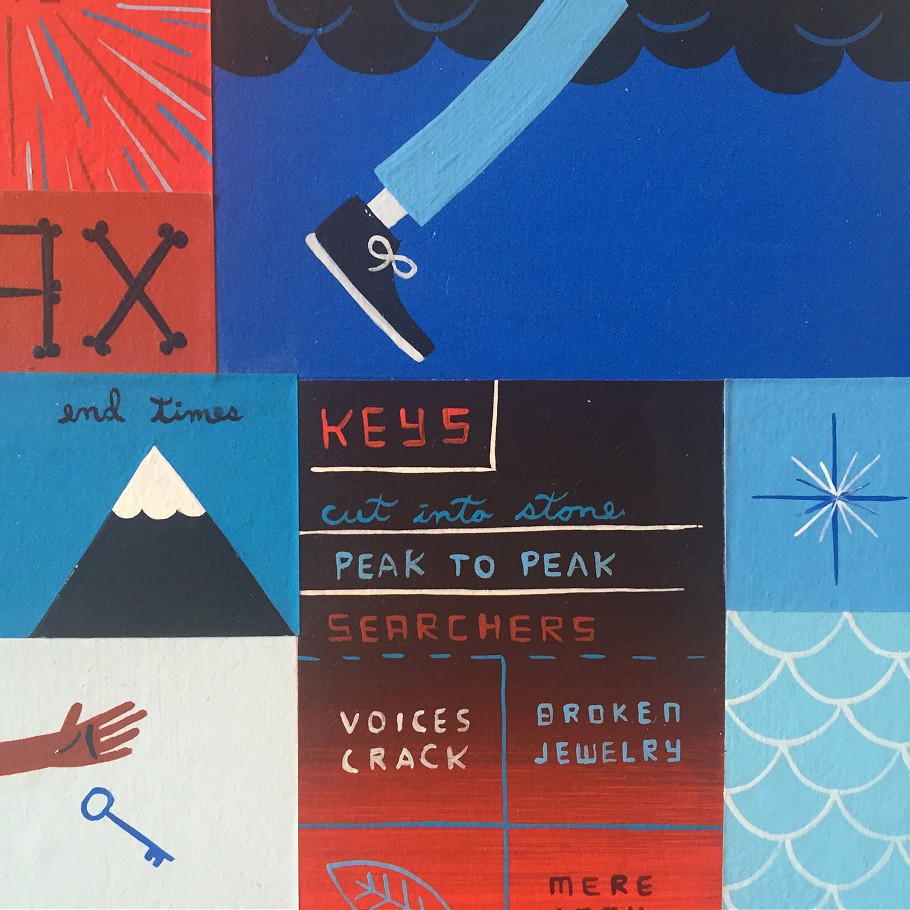 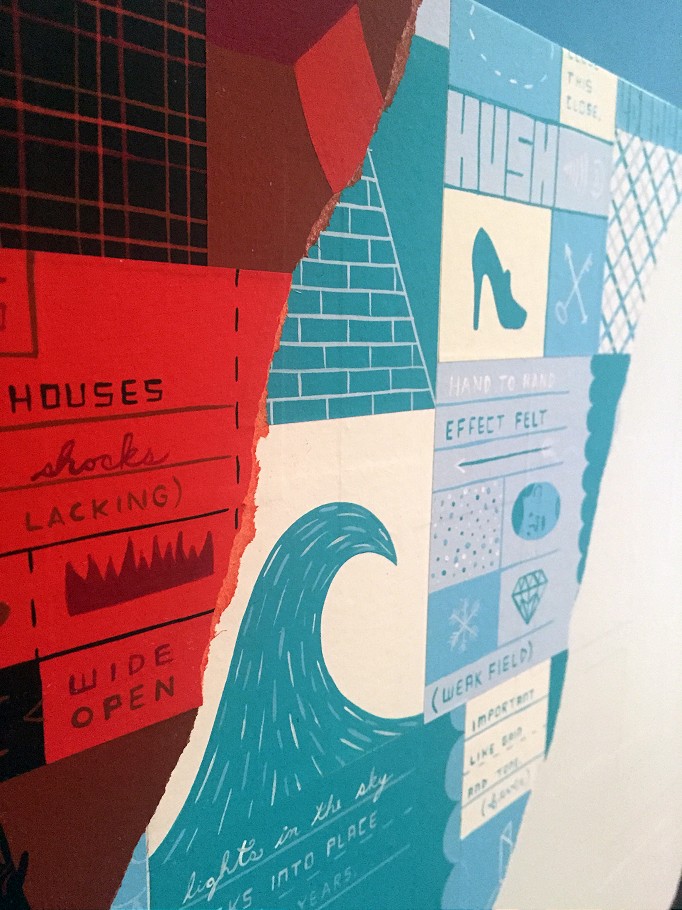