Jan Kalab is a Czech artist that was one of the pioneers of graffiti in his homeland. As a founder of the DSK crew, his career stretched from Prague’s train yards to painting whole cars in NYC in 2000. Around that time, he developed an interest for 3D graffiti and eventually started sculpting huge abstracts letters. This eventually evolved into passion for abstraction when in 2007 he graduated from the Academy of fine Arts of Prague. One year later, he had his first solo show and continued actively creating works and showing worldwide. Over time, his works became more geometric based with squares and circles as the main shapes or forms he uses. After successfully introducing his work in the US last year, Kalab has several shows scheduled, with a big solo show in Prague coming on the 29th of June at Villa Pelle. We recently had a chance to visit his studio, see the works he is preparing for this event and talk with him about his work, ideas, plans and dreams. 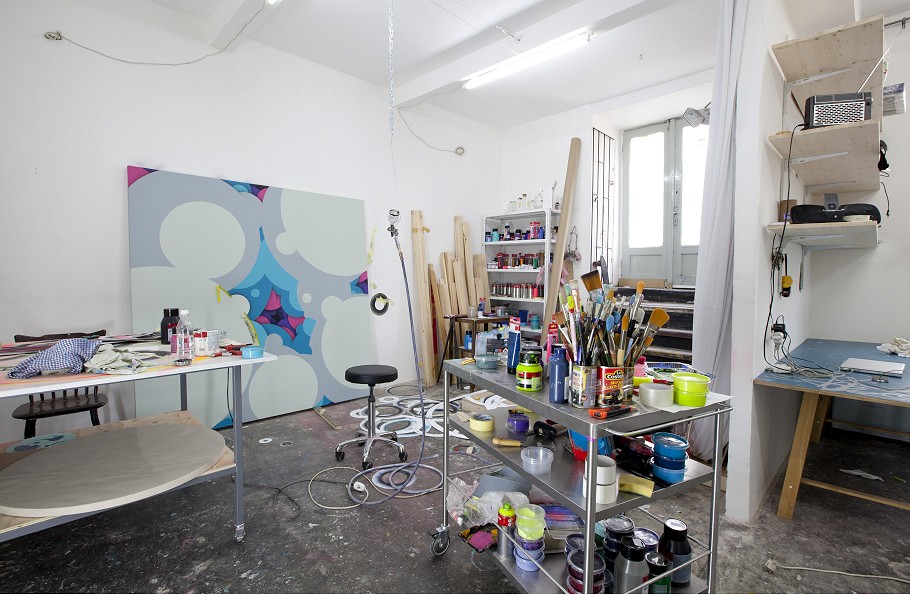 Arrested Motion (AM): How did your work evolve from abstract graffiti to minimal circular pieces?

Jan Kalab (JK): I have to say the most difficult for me was to find the way from letters to abstraction. Once I didn’t want to repeat my name (Cakes) in different styles any more, I realized I lost the most important thing – the theme. And, it takes time to build up a new one from there. I began to work with fragments which remained and I tried to picture what I was only thinking about before. Infinity, movement, change. From that moment my work evolved pretty naturally.

AM: A lot of your recent work are circle based? Why is that?

JK: After few years of abstract painting I simplified my elements only to the square and circle, so it was just natural step to go further and use the circle as the key element only. I’m working on the circle theme more or less three years already and there is still a lot to discover. In fact, the circle is the most complex shape. Circle and sphere. Just look at macro and micro cosmos photos, or think about mathematics sets. 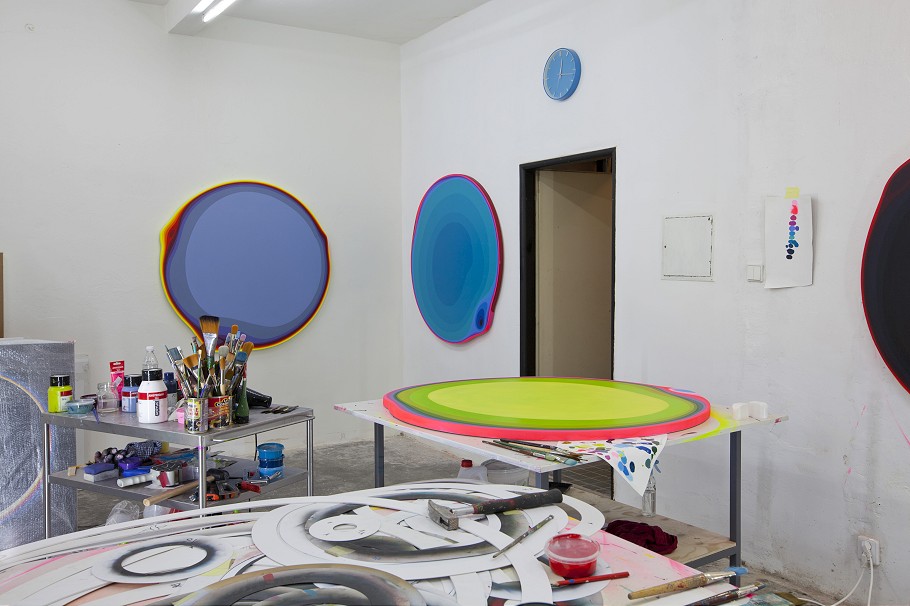 AM: Where did the idea for round paintings come from?

JK: I decided to study a circle, and the possibilities also, because not many people did at that time. It is more simple to work with straight lines. I also like the idea of what circle is – line around a point. Point is a name I used for building graffiti sculptures, and because of sculptures I was able to see the letters from the back side which eventually led me to abstraction. So when I think about all that, it all makes sense.

AM: Do those works represent something or do they have only value for its visual appeal?

JK: As I mentioned, circle is very complex shape. You can see a planet or a cell in it if you put a little imperfection to it. Actually, a lot of people ask if the organic circles represent an eyeball. I didn’t think about that before, but yes, if you alternate something in the right way, it usually gets universal meaning. Lately, I’m focused more on the visual value of my work. I like to play with colors and want to transfer the joy of painting to a viewer. So, the works talk clear and simple without using too many sentences, if you know what I mean. I would be happy to know my work made the observer feel happy while looking at it. 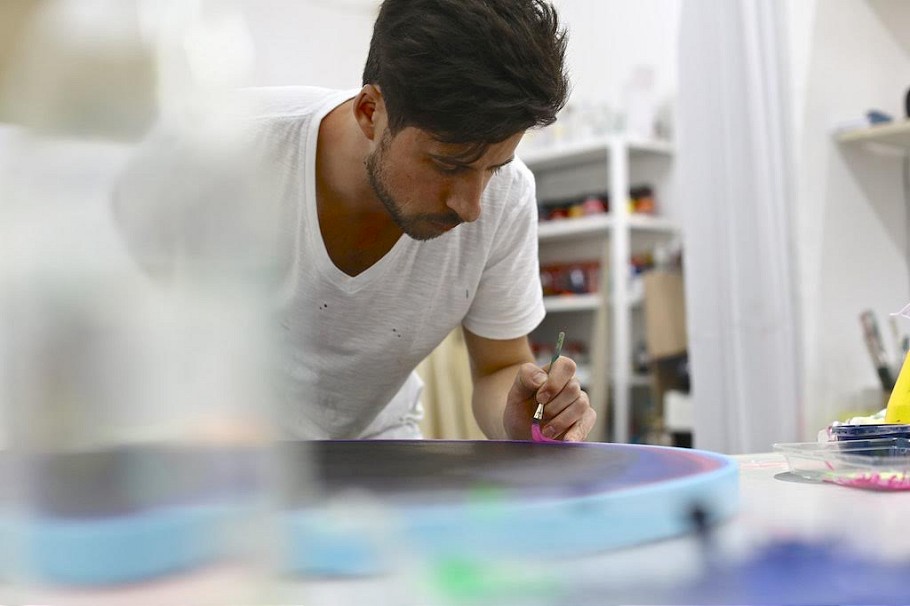 JK: First, I usually do some simple sketches with pencil in my sketchbook. I use a computer to play around with composition and colors. It is a lot of fun and so easy to change a color with one click. Than again I do a similar process in my studio on canvas. Even if I have printed out a sketch, I usually change it a little and I do a lot of color mixing and tests on canvas leftovers until I find the right tones and color combination. It is always very different what you see on the screen, what is printed out, and how the colors look on canvas.

AM: You are using a lot of custom shapes in your works. do you create those yourself?

JK: I draw the imperfection on circle, I scan the drawing, draw it again in vectors and send it to a carpenter company where they create the custom stretchers for me. It took us a while until we found the best way to build a solid round custom stretcher. The stretching part I do by myself. 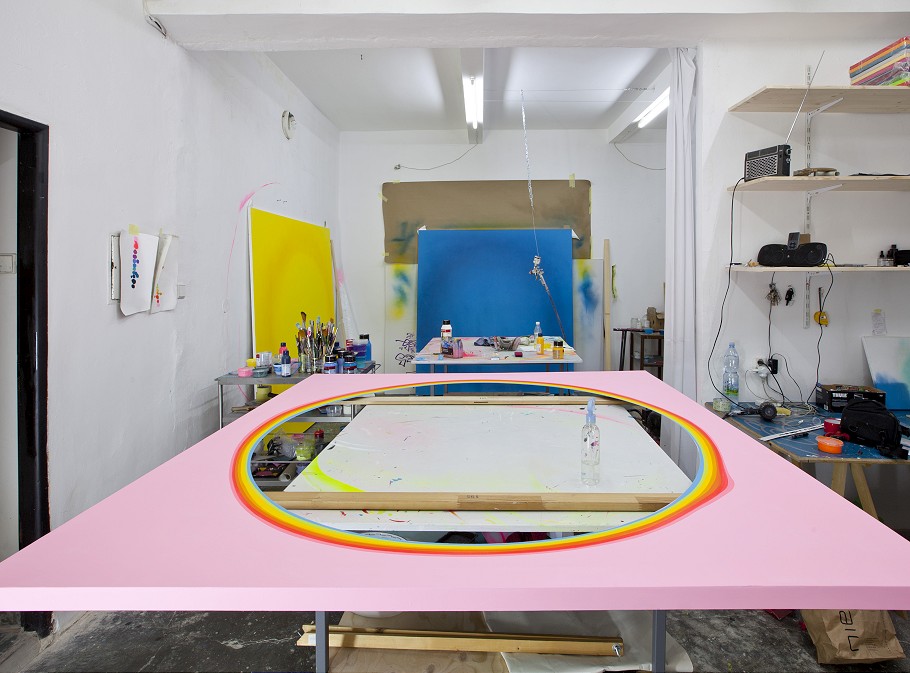 AM: Do you have further plans for expanding that concept?

JK: Yes, I guess so, but I never know where the creation takes me.

AM: What are your plans for the rest of the year? Any big shows or projects on the horizon?

JK: I’m having a solo show in Prague this summer. We prepare my first solo show in London @ Lollipop gallery for October too. I want to show there the evolution of my artistic journey from graffiti pieces on wall until the minimal geometry on canvas. So it could be interesting for the viewers to understand my evolution better. In December I’m also having the first solo show in Berlin @ BC gallery, where I will exhibit just the latest round minimal paintings and one sculpture. So yeah, busy year. I’m really excited. 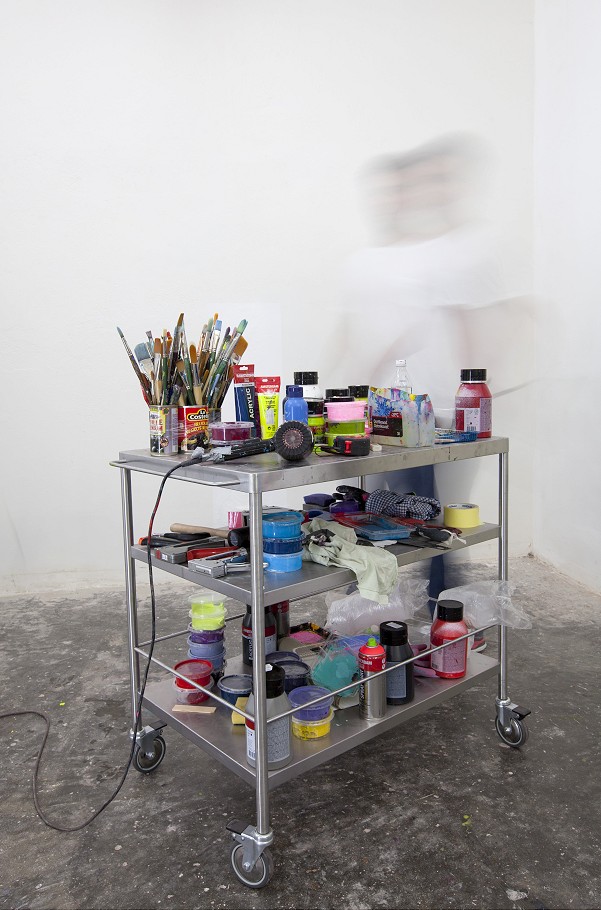 AM: What kind of work are you preparing for the Prague show?

JK: The show in Prague is in beautiful Villa Pelle that looks like a little museum. I’m working on paintings especially for that space. I’m trying to build really clean installations with a relationship between the paintings – the smallest piece is 80 cm and the biggest almost 2 x 3 m. I will show one brand new colorful sphere sculpture made of resin, and I’m really looking forward to how this will come out. The body of work is almost done, but it will be still a lot of work to cover all the spheres with designs I planned. 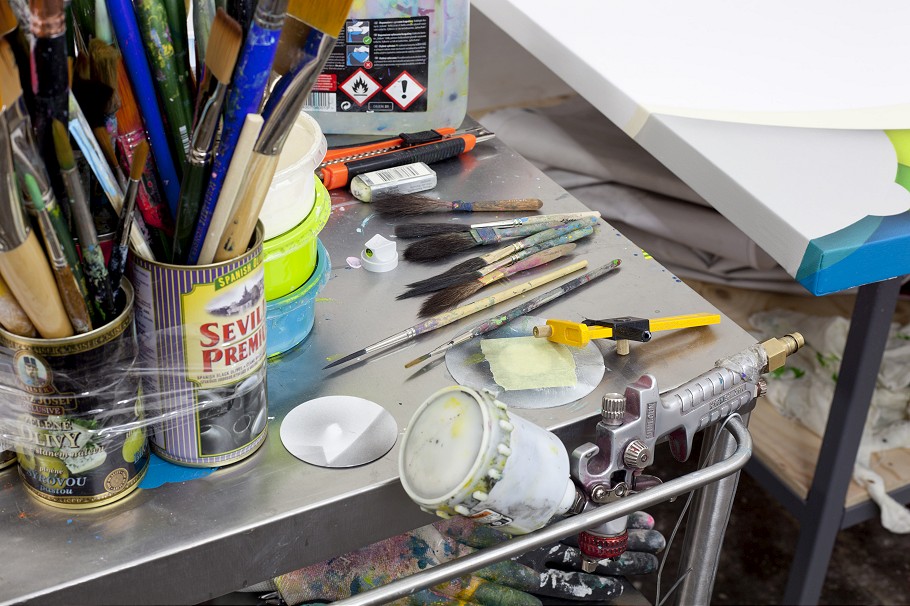 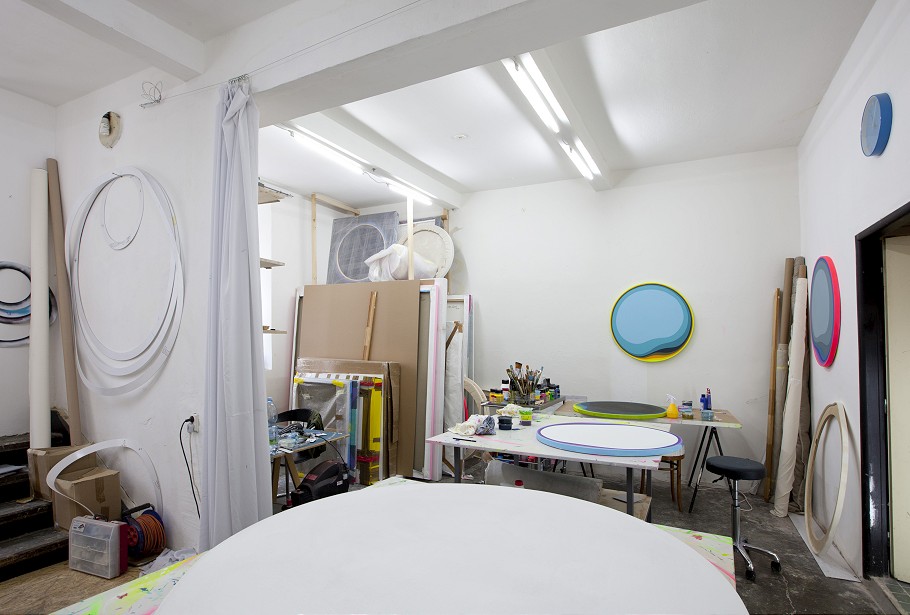 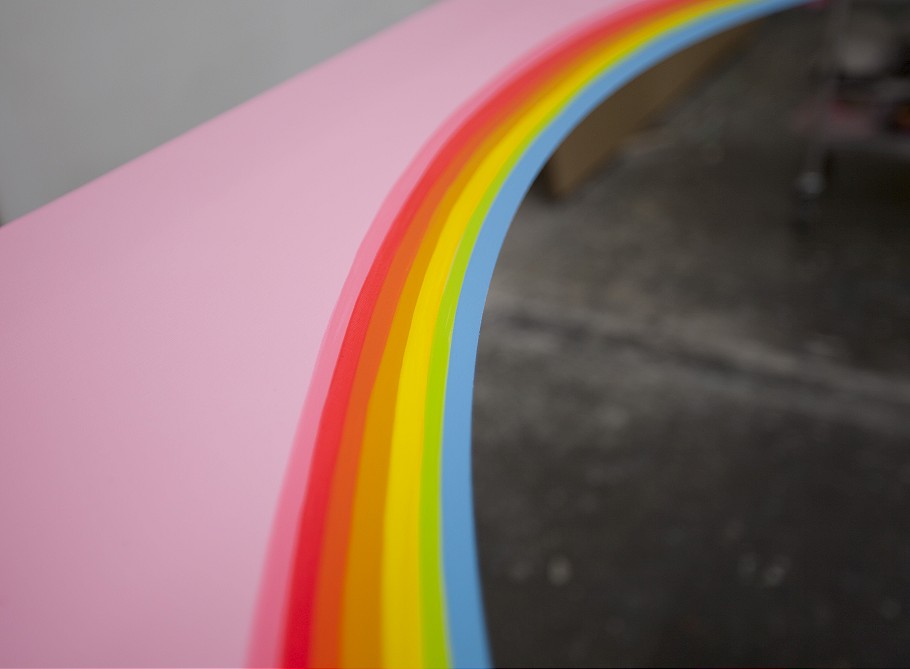 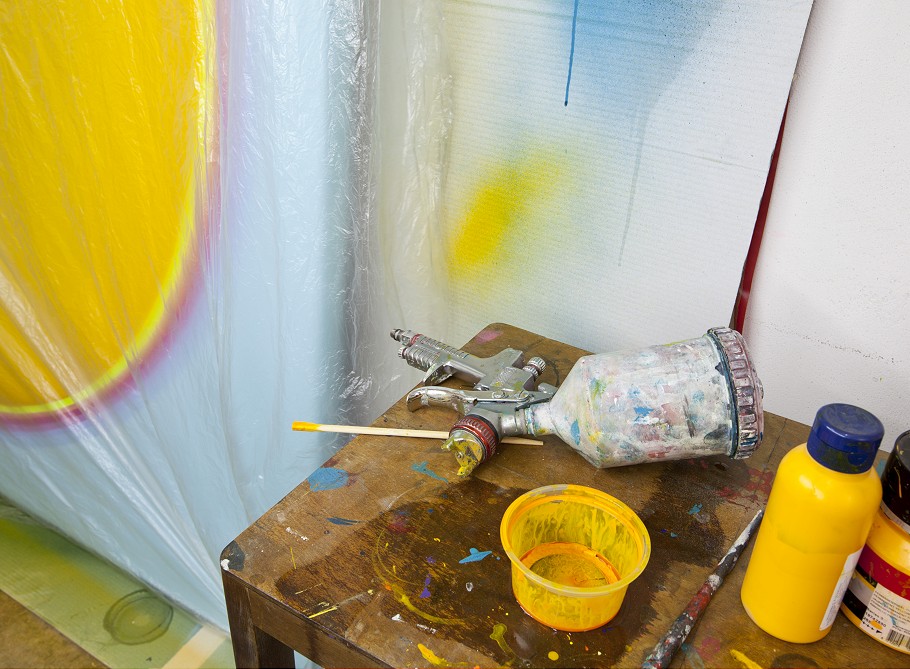