Dale Marshall originally started painting graffiti under the name Vermin in the early 1990s and he was a founding member of Bristol’s Souls On Fire crew, who were known for their visceral and heretical style. However, as the decade was coming to an end, his life was spiraling increasingly out of control because of heavy drug use and a resulting mental breakdown which resulted in him being sectioned in a Cornish psychiatric hospital, all of which Marshall has been very open about. Since switching to producing his work in the studio, the now Irish-based painter has used his work as a vehicle to explore and address his own mental health issues and to reach out to others about a subject which remains stubbornly taboo. His work rejects any suggestion of mental trauma and breakdown being a simplified or homogeneous experience. The artist’s abstract work conveys a chaotic and confusing collage of emotions and experiences which are punctured by both intense anxiety and fear on the one hand and confusing ecstasy and euphoria on the other. Now based in Ireland, he has shown on both sides of the Atlantic including at the Herbert Art Museum (covered) and we recently caught up with him to discuss his work, upcoming print release and future plans. 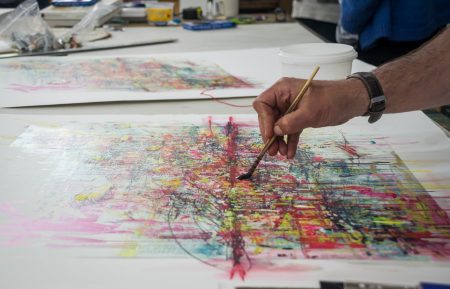 Arrested Motion (AM): You’ve had both an informal education learning to paint graffiti on the streets and, later on, the more orthodox experience of studying at art school. How much has that past shaped who you are today as an artist?

Dale Marshall (DM): I use my past to influence all aspects of my work; it’s a documentation and amalgamation of my upbringing. I suppose the graff taught hard lessons in life and was kind of a self-learning and intuitive process deep from within. And then going to art school in the UK and California was a challenging process on whether I could make the grade as a contemporary artist. The graff was a challenge of dealing with social street culture but getting taught modern contemporary painting brought more to the idea of concept and a deeper nuanced language.

AM: What’s the relationship in your work between the snippets of text and the abstract elements that sit alongside each other?

DM: There are several elements that I implement in my work; the first would be dealing with duality, something that is ingrained in me. Working on canvas is a language pattern and a hard skill to master. Each mark is its own system, whether it’s down to use of material, application, shape or color. It all has its own qualities that are serving a purpose. The direct relationship, not just with the text but these elements, tell their own story. I use text for extra narrative to tell my own personal story which highlights parts of my life and helps me rehabilitate and sometimes help others. I want to share my story with the world and why not? 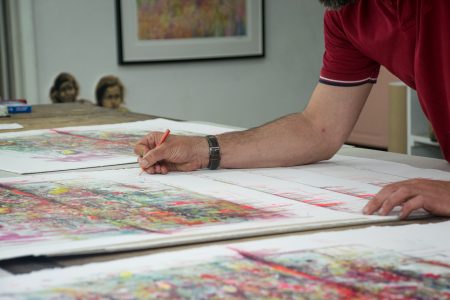 AM: What was the motivation behind your recent decision to move out to the wild Atlantic coast of Ireland?

DM: I wanted to finally build a project that was beneficial and a property in Co. Sligo came on the market that ticked all the boxes. We moved from the beautiful countryside of mid-Wales last year into farming land near the magnificent Irish coastline and deep into a spiritual area of the Carrowkeel megalithic tombs, which we can see at a distance from our back garden. The property came with a large studio set in nearly 2 acres of natural land. To cut a long story short, I am intending for a pattern of regeneration, minimal waste and energy usage. Growing organic food and hopefully making the property a place that others can come to share knowledge and skills, that is out of the pattern of consumerist culture; it’s inspiring and empowering. I am keen to get the wider community involved in what we are trying to achieve here and that could come down to inviting my artist network, collectors, or creating a retreat for people overcoming personal trauma. The bottom line is, and what I want collectors to know is, that I have this approach that it’s not about selling my work and the money gets wasted on a party lifestyle. It’s about regeneration and a holistic approach that partly gets invested to support a wider community, for me that’s what it’s all about! 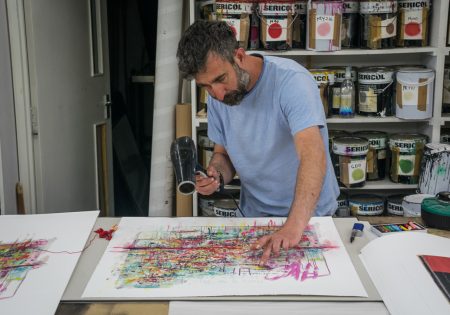 AM: And can you tell us a bit about what you’ve been up to out there and how it’s shaped your work?

DM: As I am sure you can understand, moving and taking on this large project has not been an easy task. I have been without a studio for the past eight months due to a lot of renovation work and storage. I feel like I have been on a sabbatical in this time, doing and learning things that I have missed out on due to a heavy schedule since first exhibiting; it has been refreshing. My studio will be ready in three weeks and I am looking forward to a new direction of work with 200m of 9ft wide canvas ready to open. My environment has always been very important to me and my practice, and I have been taking time out to learn how this is going to fit into other projects regarding documenting growth. My next collection with be continuing my ongoing personal narrative but I also want to fulfill another burning ambition regarding art, collaboration and social theme as a side project. I used to think graffiti and street art was revolutionary and a fight against the system but I am beginning to wonder whether organic growing has a stronger impact! Let’s not spend our time complaining about the world we don’t want and utilize our energy to create the world we do want to live in, collectively. 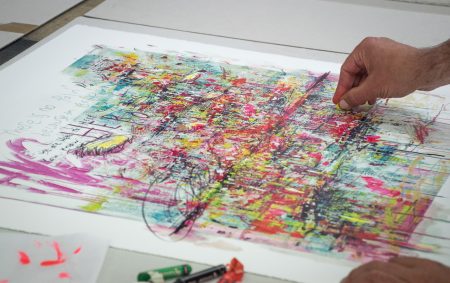 AM: Can you tell us a bit about your forthcoming print release?

DM: I have been working with Goldmark Atelier in Uppingham, UK for the past three years and I am delighted that we are ready to publish Vacant Hero a 22-color screen print on the 18th of May. We have been working on a number of techniques such as etching and collagraph. Ian Wilkinson (the head printmaker) picked an image from my most recent show and contacted the owner of the canvas to re-photograph the work. Along with my manager Vanessa, we all came to an agreement to rework the original piece into a new narrative. It took two months of an ongoing process to get this ready for the press. We are all thrilled with the result! The new narrative focuses on my time of being sectioned and not knowing who to trust. It’s a deep and emotional work, again the duality is apparent from the hope induced pretty color palette aligned with the raw mark making and text dealing with fear. It’s a series of standard edition and an embellished edition. 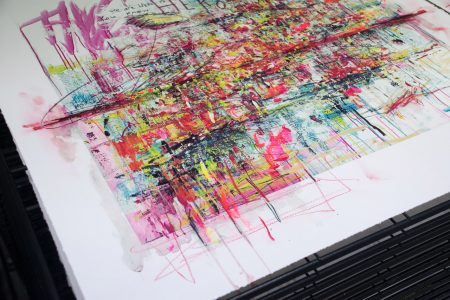 AM: In the studio you work alone without any assistants, so how have you found the process of collaborating with the printers for this release?

DM: I have collaborated on outside walls for a number of years but I feel my painting practice is something that I need to complete on my own. To be fair, Ian is a great artist himself. So not only have we shared ideas inside the print studio, we have also shared ideas in the painting studio. This is what I have really enjoyed about working with Goldmark; they have been, and will continue to be, very honest and welcoming people. When you work in their studio it is just as much a residency, as much as publishing a work. That is refreshing and what holds a great deal of weight behind this print. The relationship between artist and printer to bring the best out of the artist.  I hope that collectors supports this lovely creation. 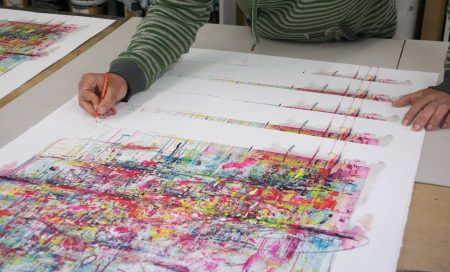 AM: What plans do you have in the pipeline for the second half of the year?

DM: I have been invited back to LA for my third solo show at Soze Gallery in October, so I am keen to get back to producing some new works for this exhibition. As always it becomes an intensive three to four months of solid painting, alongside this other commitments and opportunities will come, so it’s going to be a busy 2017. 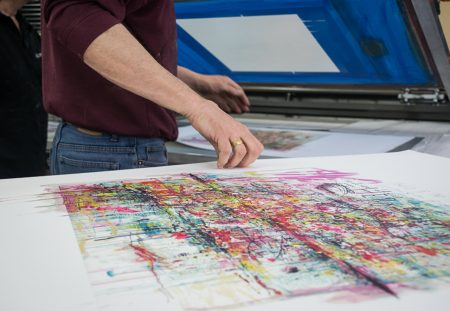