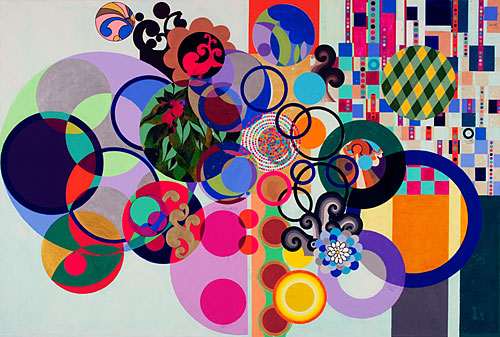 New Work, which opens October 11 at NYC’s James Cohan Gallery, is the artist’s third show with the gallery, and runs through November 15th.

More images and an excerpt for the gallery’s press release, after the jump. 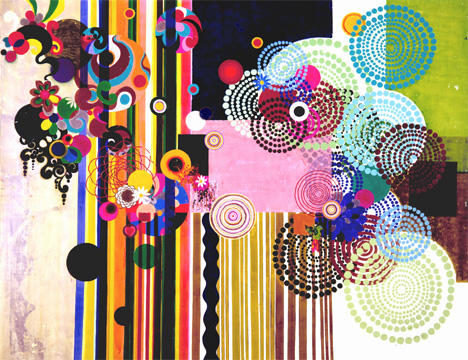 James Cohan Gallery is pleased to present an exhibition of new works by artist Beatriz Milhazes, opening October 11th and running through November 15th 2008. As one of the most celebrated Brazilian artists working today, Milhazes’ exuberantly colored, rhythmically constructed abstract paintings, collages, prints and architectural installations are well-known worldwide. Milhazes merges all of the formal concerns inherent in abstract painting with a dizzying hybrid of influences that bounce off of each other to produce works in which, as the artist describes, “culture eats culture.” In her attempt to make the viewer’s eye “spin around,” Milhazes deftly uses images as a distribution system for color.

In this third solo gallery exhibition, Milhazes will present a selection of collages and paintings. In the past, the paintings have been the inspiration for the artist’s other endeavors, such as her collages made from chocolate candy wrappers, shopping bags and colored paper and her installations on building faÃ§ades. In this latest body of work however, the reverse is true; the paintings, whose surfaces are built up from an elaborate process of transferring motifs painted on plastic sheet, are increasingly influenced by the immediacy of working with small bits of paper and the bold strokes of large-scale architecture. This shift, as well as a deepening involvement in nature â€” the artist’s Rio de Janeiro studio borders her beloved Botanic Gardens â€” has influenced Milhazes’ new work, making it even more rigorously structured with broader fields of color and new elements derived from abstractions of natural and architectural forms.