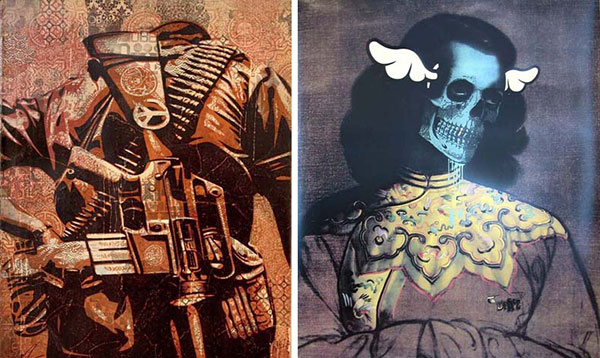 This weekend, two of street art’s best, Shepard Fairey and D*Face, invade La Ville-Lumiere (that’s Paris) for a show at the lovely Galerie Magda Danysz. Looks like Mr. Obey will be showing mostly larger HPMs and album covers, giving European collectors a crack at some images from his recent, instantly sold-out San Fran show; D*Face will show some mixed media works and prints. If you are in Paris, check out the vernissage on Saturday, or peruse the show at your leisure sometime before October 25.

Read the gallery’s press release and see more images after the jump.

Apostles of the visual disobedience, Shepard Fairey and D-face, are now amongst the most talented and famous artists in street art. As D-face claims “I want to encourage people to not just see , but to look at what surrounds them and their lives, re-thinking and reworking cultural figures and genres to comment on our ethos of conspicuous consumption”. Shepard Fairey adds that in his art, his aim “is to reawaken a sense of wonder about one s environment, to stimulate curiosity and bring people to their relationship with their surroundings”. Using the political and advertisement propaganda codes, they are leaders of a visual revolution of their own.

Shepard Fairey is a world famous artistic activist. The Boston Institute of Contemporary Art calls him one of today s best known and most influential street artists. D-Face is on his hand one of the most prolific and famous street artist in the UK, always destroying icons to give them a better second street life.