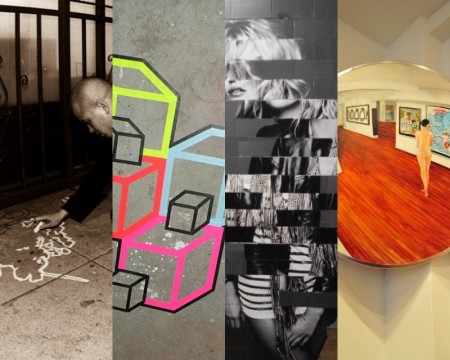 Big surprises coming out of the Carmichael Gallery, who for weeks have been hinting at a “secret group show” in the rear portion of the gallery to coincide with BOXI’s debut United States solo, opening this Thursday, April 9th.

The group show will feature the Neo-Con Collective, comprised of shadow chalker Ellis G. (Seen on the streets), the man of colorful geometric shapes Aakash Nihalani (Update) and ad disruptor extraordinaire Poster Boy. The collective will be joined by London urban artist Zeus, whose latest works explore the idea of perspective and the combination of graffiti and typography through three dimensional pieces.

It certainly goes without saying that the group will utilize their ephemeral mediums to present a “fresh viewpoint” on the everyday urban landscape while they’re in Los Angeles. Keep your eyes peeled and stay tuned to AM for further coverage.