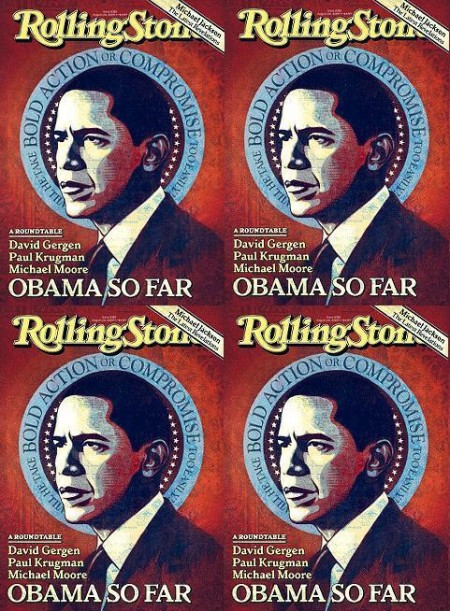 The August 20th issue of Rolling Stone will feature a cover with a new image of Barack Obama by Shepard Fairey.Â  Unlike the idealistic iconic image that a nation of Obama supporters fell in love with, the latest by Fairey incorporates elements that show the situation that the President is currently in. As the artist puts it: “it’s one thing to be running for president and it’s another to be President, and I think this new illustration that I did hopefully captures the complexity and the weight of his new role.”

Contrary to initial assumptionsÂ thatÂ thisÂ image “deifies” the president, this latestÂ illustration by Fairey reflects the gravity of being in the Oval Office and the tough choices that need to be made, as well asÂ  showing that the weight ofÂ public perception is on Barack Obama’s first year in office. When Shepard was asked about his inspiration of this latest incarnation of Obama (based on Gilbert Stuart’s Unfinished Painting of George Washington), he says “the jury still out on whether this President will live up to his promise.” He is clearly making a statement with Rolling Stone that his latest interpretation of President Barack Obama is not a blind shining endorsement, but a cautious review of the firstÂ stage of his presidency. This cover will be available this Friday across the nation.