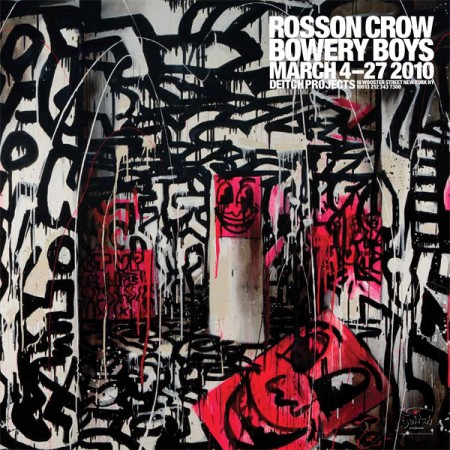 For one of Deitch Projects last hurrahs, the gallery will host “Bowery Boys,” an exhibition of new paintings by Rosson Crow. For the show, which opens March 4, Crow has used her adopted town of NYC as the theme for her bright and energetic large-scale canvases.

See an image of the lovely Ms. Crow from the NYC Stages show (covered) and read the Deitch’s press release for “Bowery Boys,” after the jump. 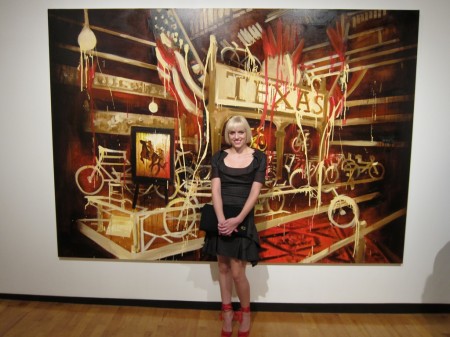 Bowery Boys, an exhibition of new paintings by Rosson Crow, opens at 18 Wooster Street Thursday, March 4th. This exhibition of large-scale oil paintings explores the history of “bad boys” in underground art and as an agent of culture in New York City.

From the flamboyance of a wild-style bombed train pulling into a subway station in the 80s to a haunting red opium den from Chinatown in the 1880s, Rosson explores the rebellious and lawless side of New York City history. Rendered in hallucinatory layers of oil paints and washes, her theatrical confabulations collapse centuries and synthesize styles to reveal the multiply haunted nature of interior space and the affinities that align across time.

Rosson has always shown a marked interest in masculine spaces; she has previously painted saloons, gun shops, oil derricks, rodeos, stock market floors, and many incidents in the arguably male-dominated tradition of modern art. Here she imaginatively explores the idea of the “bad boy” as fawned over by art audiences and celebrated in New York City history. How has a spirit of illegality and rebellious youth shaped the New York City cultural landscape? Gangs, graffiti, gays, drugs and illicit sex are part of the city’s spirit but also a big part of the art world today. How has New Yorkers’ love for this spirit shaped the history of art and exhibitions today? The cultural moment in underground New York when hip-hop met graffiti met the east village scene in the 80s led to an art explosion of interdisciplinary activity. Many of these paintings explore that moment and its legacy for artists working right now.

The canvasses themselves are big, bold, and unabashedly entertaining. As philosophically minded as Rosson may be, she is certainly not afraid to be sexy and fun. The scale and flung paint may be visually very macho, but the paintings are ladylike as well; and Rosson is the type of feminist who sees “ladylike” as the compliment that it is. Her frank, punk, post-gender attack is more personal than political, and more imaginative than expository; or in simpler terms, more badass.

This exhibition has a bit of a self-reflexive feel as well, as the history of Deitch Projects is aligned with the cultural trends explored in Rosson’s paintings. Jeffrey Deitch is an instrumental figure in maintaining and shaping the legacies of the 80s Rosson addresses, and the current position of Deitch Projects as exhibiting and supporting the current generation of rebellious youth and underground art from this lineage is very much in the forefront of Rosson’s mind. By exploring these themes in paint Rosson claims them for her own as well, loves and hates aspects of them, but paints herself into the discussion nonetheless.

Rosson Crow is a young lady from Texas living in New York City via Los Angeles and Paris. A contemporary hybrid version of a traditional history painter, Rosson moved to the New York City for six months to research and execute this exhibition. Her shows often relate to the history of the city in which they are exhibited: a Paris show at Nathalie Obadia featured the gardens of Versailles, Fontainebleau and the Loire chateaux crossed with Las Vegas casino floors; a Los Angeles show at Honor Fraser Gallery featured famous LA architecture and Dwight Yoakam; while her last exhibition, Texas Crude, at White Cube in London, focused belching black oil rigs in Texas and Francis Bacon butcher shops. This exhibition will be accompanied by a catalogue.