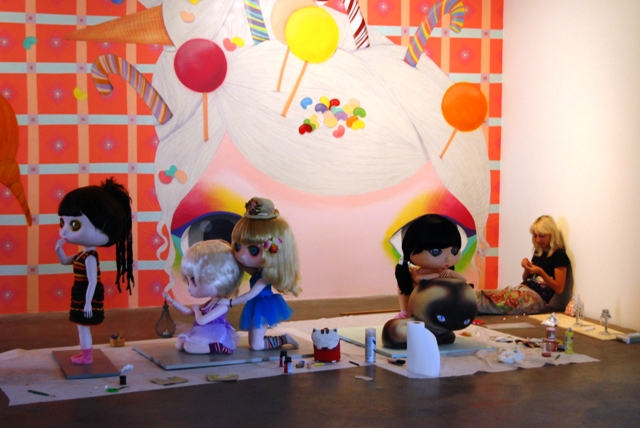 Carmichael Gallery’s move to Culver City is the big news this weekend. With the debut North American solo show from Brazilian artist Nina Pandolfo “Life’s Flavor” serving as their debut exhibition, this proves to be a not to be missed event. Look for several shots of the show coming together after the jump, as well as a full breakdown of all the other shows keeping art lovers busy this weekend.

Nina Pandolfo’s debut North American solo show will serve as the inaugural exhibition at Carmichael Gallery’s new location in Culver City. Their new space is beautiful and Nina’s amazing new body of work really brings it to life. From stunning life-size sculptures to large canvases to jaw-dropping mixed media works that just have to be seen to fully comprehend. Fresh off her high profile appearance down in Miami during Art Basel as part of Deitch’s big Wynwood Walls project, Nina doesn’t disappoint. By far her most cohesive body of work yet. Her roots in the Brazilian street art scene run deep, so don’t sleep and get out to Culver City this Sat to peep this amazing show from one of contemporary art’s most promising emerging artists. See below for a look behind the scenes at ‘Life’s Flavor’ from Nina coming together.

Fri, March 19th 8-11PM
BLDG Gallery
30 West Pike Street in Covington, KY
‘The London Police Ride Again’ featuring new works from The London Police based on Cincinnati and Kentucky – new print, a lecture and some local murals are also in the works – check site for all the action
(On view through April 30th)
http://www.bldgrefuge.com/