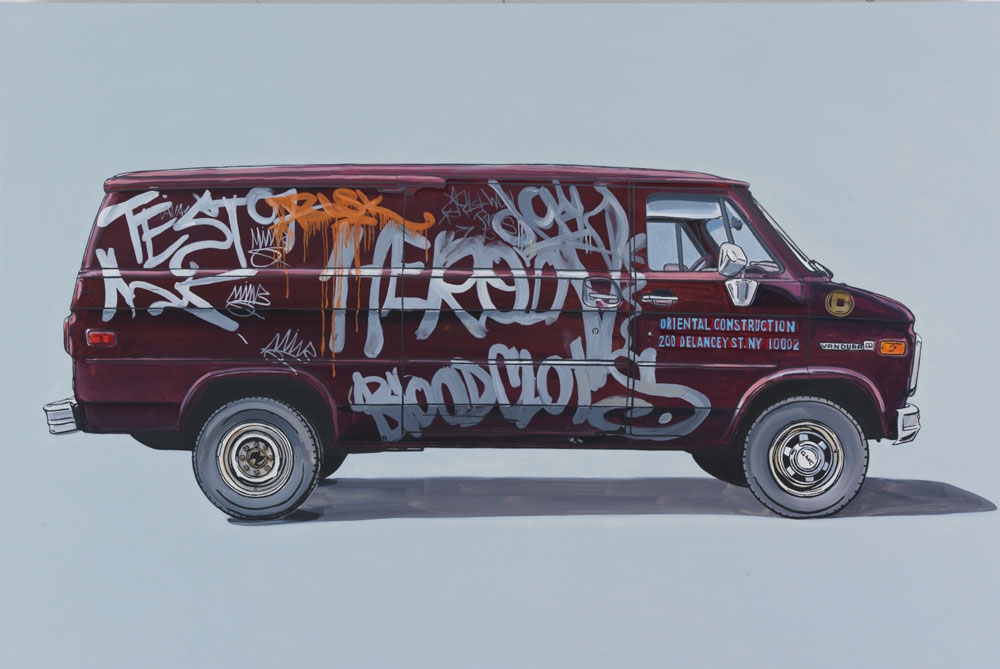 AM was recently able to bring you a little insight from Kevin Cyr via our studio visit as he prepared for his latest show, “Temporal Surfaces” alongside Jessica Hess at San Francisco’s White Walls Gallery. We followed up our glimpse into Kevin’s work with an interview and some preview images from the show, which opens this weekend.

Read on for our interview and more images after the jump. 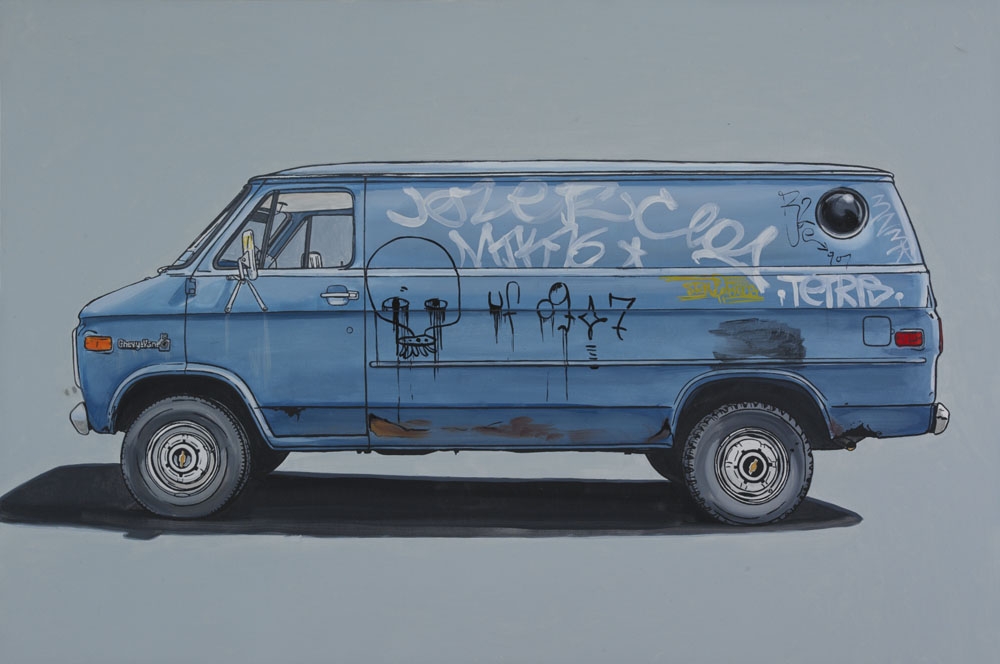 Arrested Motion (AM): First off, we at Arrested Motion wanted to pass on our congratulations for your Camper Kart’s selection as one of the West Prize winners for 2010 from a field of 3600 entries. Where did your concept for this ambitious project stem from? Was Cormac McCarthy’s “The Road” a particular inspiration?

Kevin Cyr (KC): Thanks for the congrats. I’m thrilled to have the Camper Kart in the West Collection. The idea comes from a couple of different places. Campers and camping have been apart of my work for a while now. A couple of years ago I built the Camper Bike: a Chinese three-wheeled bike with a camper top. During its construction, I happened to be reading Cormac McCarthy’s novel, “The Road”. I thought it was interesting how McCarthy imagined the cart as the most utilitarian vehicle to transport the father and son’s meager supplies. And, maybe because of his novel, I began to notice a number of shopping carts in my neighborhood used by people who collect bottles and cans for recycling.

AM: You found funding for the Camper Kart through various sources such as Feast and Kickstarter, and the West prize provides you with a level of funding too. How important are funding avenues such as these to you in your ability to work as an artist and produce the work that you want to?

KC: If it hadn’t been for FEAST (Funding Emerging Art with Sustainable Tactics), I don’t think I would have gone forward with the Camper Kart. I decided to submit a proposal for a grant which forced me to make sketches, plans and renderings. When I received the runner-up grant, I was obligated to built it. I received $400, which was great, but quickly spent. Soon after, I launched a campaign on Kickstarter which allowed me to raise the remaining funds I need in order to complete the piece. Despite a tough economy, it’s amazing that people are willing to contribute towards something they believe it. 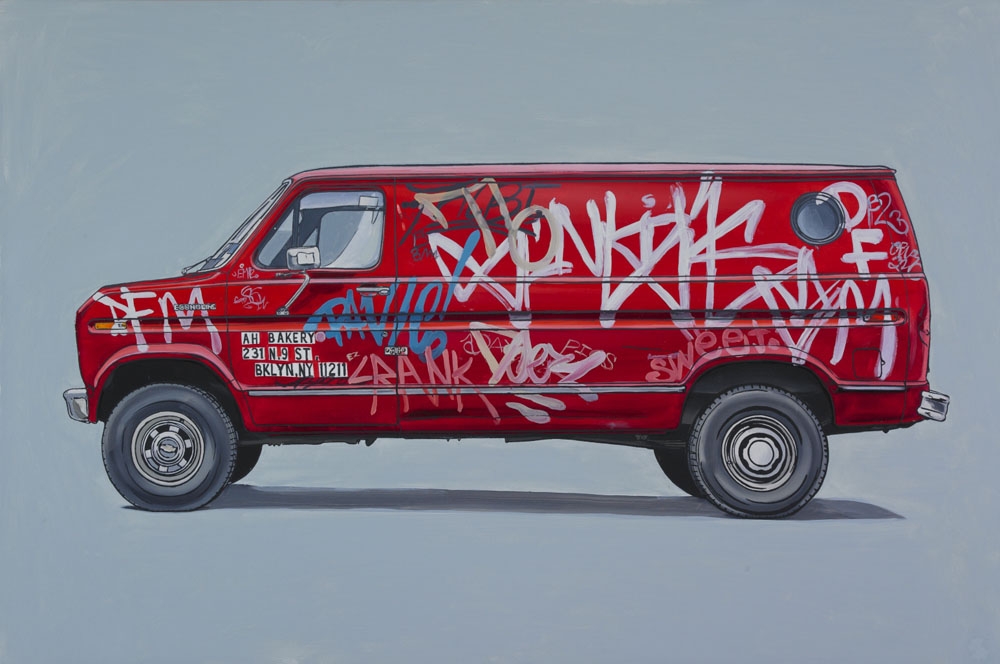 AM: What future plans do you have for the Camper Kart project? Obviously, the finished piece will go into the West collection, but is there any plans to exhibit it anywhere?

KC: The Camper Kart will be exhibited for the West Collection in early April. My intentions are to create another Camper Kart to exhibit with a series of paintings, plans and sketches. I’d also love to make a video of someone traveling with the Camper Kart.

KC: I do have plans to take the camper theme further. I’d like to do something with an Indian auto rickshaws, but for now I have to fully realize my ideas behind the Camper Bike. It’s stored in Beijing for now. I’ve been collecting camping related objects that aren’t found in Beijing to fill the interior. 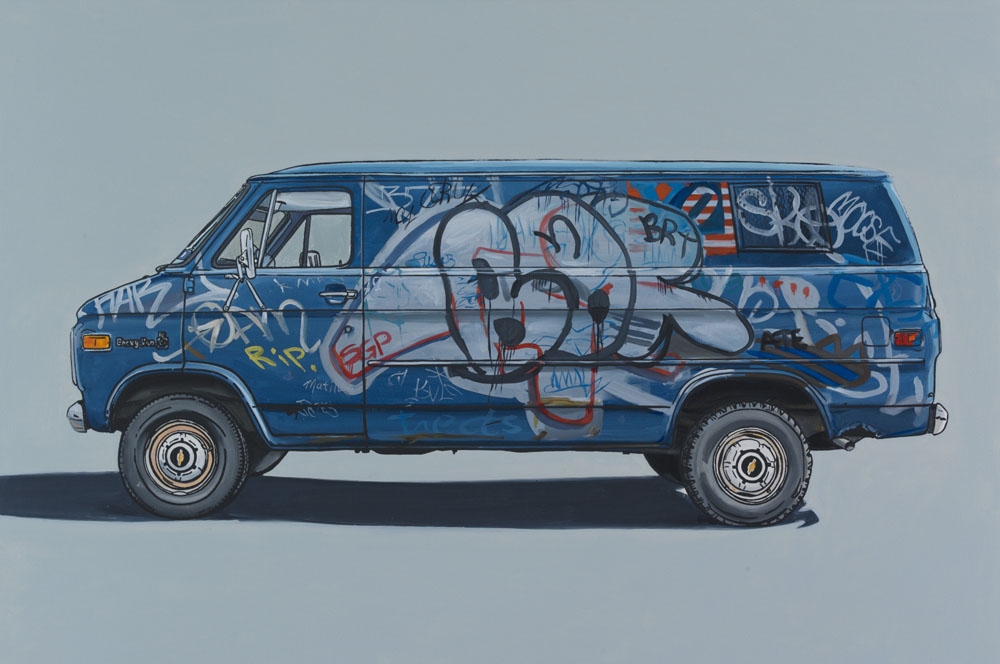 AM: You live and work in Brooklyn, which seems to be an almost endless source of subject matter for the vehicles you portray in your art. I guess that location is pretty important to you, but just what is it that drew you to Brooklyn and what keeps you there?

KC: I’ve been in Brooklyn for five years, although it’s gone by way too fast. There’s still great subject matter, but I feel like I’m in a bit of a race against time. Most of the vehicles I’ve painted are disappearing. I don’t see nearly as many old delivery trucks, cars or vans. The newer vans are not as interesting to paint. They still have a lot of tags on them, but I’m more drawn to the older vehicles. They have a lot more character.

AM: What was it that attracted you to these vehicles initially? What subject matter were you painting before you started with the vehicle portraits?

KC: Shortly after I graduated from Massachusetts College of Art, I got a job as a bike messenger and my subject matter at the time was quite broad. I spent a few years doing everything from industrial landscapes, portraits of my friends—most of them messengers—and vehicle paintings. I always had a camera with me and anytime I’d see something interesting I’d snap a shot of it. I soon realized a lot of my pictures were of old cars.

AM: I find that the dereliction of the vehicles is very appealing and when I see a new piece, I feel that I want to know about each vehicle’s history. Do you find the tags that you see on the vehicles tell you a story of which neighborhood the vehicles may have passed through on their travels?

KC: I have to admit that I don’t pay attention to the graffiti very much and most of the vehicles I’ve painted are from my neighborhood. I do notice some of the more prevalent tags, but when I come across a vehicle I’m usually more conscious of the lighting and which way the shadows fall. If I’m lucky, I can track a vehicle and wait until the light is perfect before photographing it, but most of the vehicles I’ve only seen once. 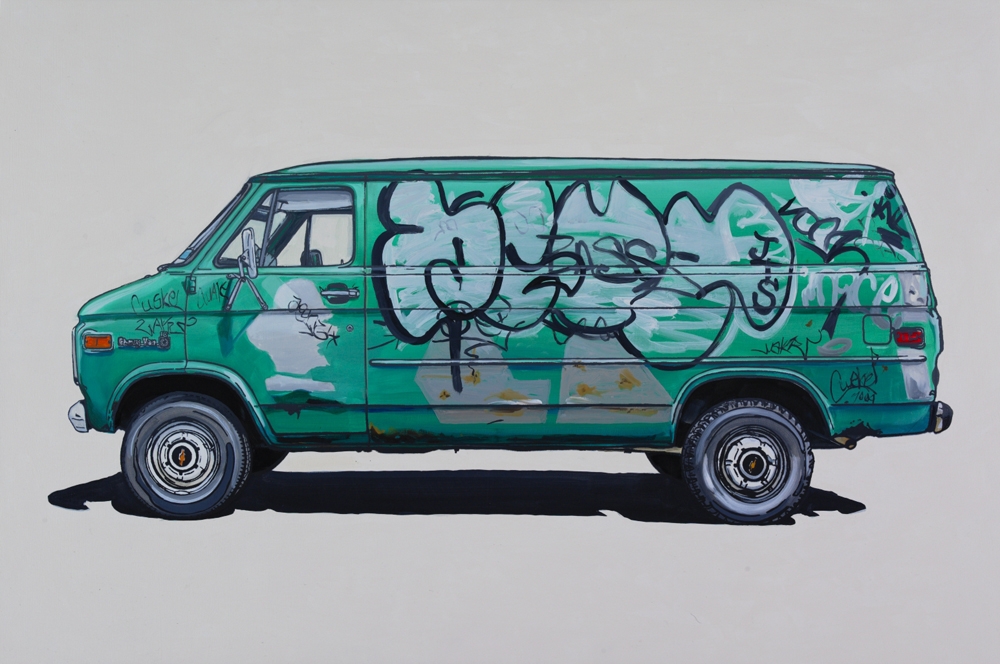 KC: I never got into writing graffiti. I grew up in Maine and saw graffiti on freight trains, but I never felt compelled to do it. If I grew up in an urban environment, it might have been a different story.

AM: I understand that you were an assistant to Kehinde Wiley. How did that gig come about? How has working with him helped you in your own career as an artist?

KC: I took that job just a couple weeks after I moved to Brooklyn. I was brought on to help with his VH1 Hip Hop Honors paintings and stayed with the studio up until January of this year. I was with him for a little over 4 years. It was certainly an amazing learning experience and the ability to work on my craft all day was invaluable. I definitely became a better painter, but I think the most valuable experiences were the working trips to China and India as a part of his “World Stage” series.

AM: Your two person show at White Walls in San Francisco, “Temporal Surfaces”, opens on March 6th and you share the gallery with Jessica Hess. Her paintings share a similar theme to yours in their portrayal of decay in the urban setting. How do you think that your work compliments each others, and what made you decide to pair-up on this show with each other?

KC: We were paired up by the curator for the show, Lainya Magana. I think our work will go well together. We have very similar painting styles and on top of that our subject matter is so similar. We both have a bright color palette despite the grittiness of what we paint, and the overall themes of decay are prevalent in our works. I think it’ll be a good show. 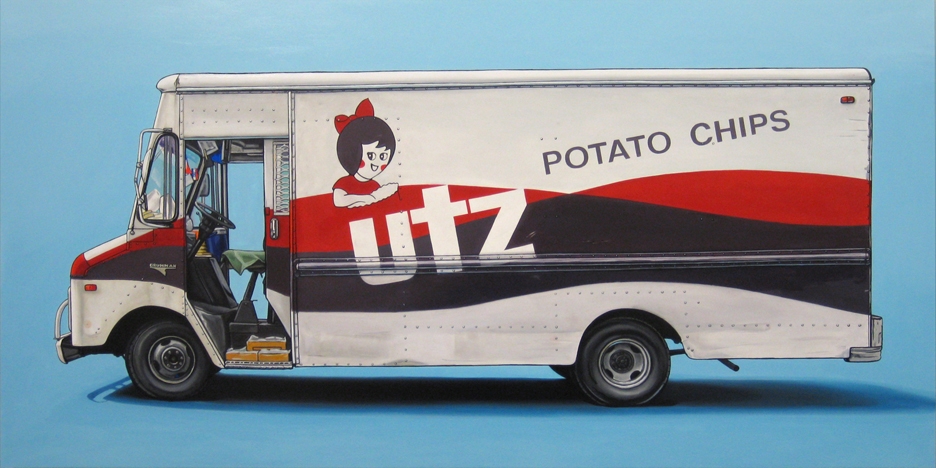 AM: One of the new series of paintings in the show, the “Utz” paintings, features a delivery van captured in various stages of decoration / deterioration, and then the “Allen” paintings show a heavily tagged vehicle seemingly later restored with a fresh paint job and rejuvenated, only to be tagged over again. How long of a period did you track the progress of these vehicles for?

KC: The Utz series spans a period of about eighteen months. I only saw it three times within that period, but I’m sure it went through many changes. The last time I saw it was about two years ago now, it was replace with a much newer Grumman truck without the painted logo.

The van was a shorter period. I saw it first this past summer and when I returned a couple months later to get a better shot, it was painted light blue with two tags. It’ll be interesting to see how that one changes.

AM: I find the names you assign to the paintings, and supposedly the vehicles also, interesting:
Seigel, Fillmore, Meeker, Berry, Banker, Union, Morgan etc. Where do the names come from?

KC: This might ruin it for you and it’s probably less interesting for people who live in Brooklyn, but they’re the street names where vehicles were found. If you look at a map you’d see that they’re almost all in a two mile radius from where I live. I don’t usually set out to find vans, but discover them in my daily routine. Sometimes I can go a few weeks without seeing something worthwhile and other times I find something so great I paint it right away. 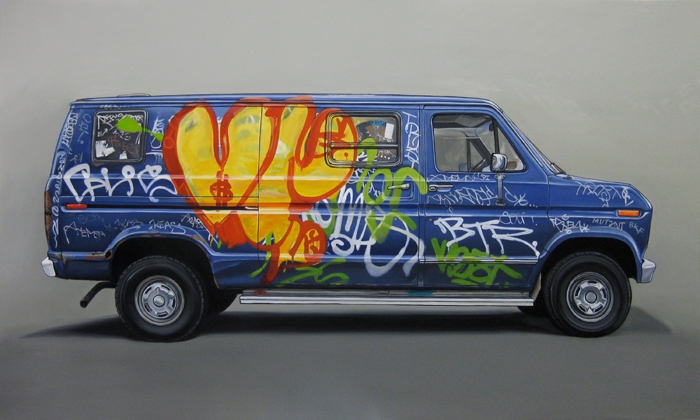 AM: Your last show was in January in New York at the Raandesk Gallery, and it seems as you have painted an amazing amount of new work for this show in just a couple of months – you must be a work-a-holic! Do you anticipate a different reaction to your Brooklyn vehicle portraits on the opposite coast of the United States?

KC: I’ve certainly had a very busy few months and am looking forward to slowing down a bit. These shows were a catalyst for me to shift to working for another artist to spending 100% of my time on my work. I’m looking forward to the opening and seeing what people think of the work. 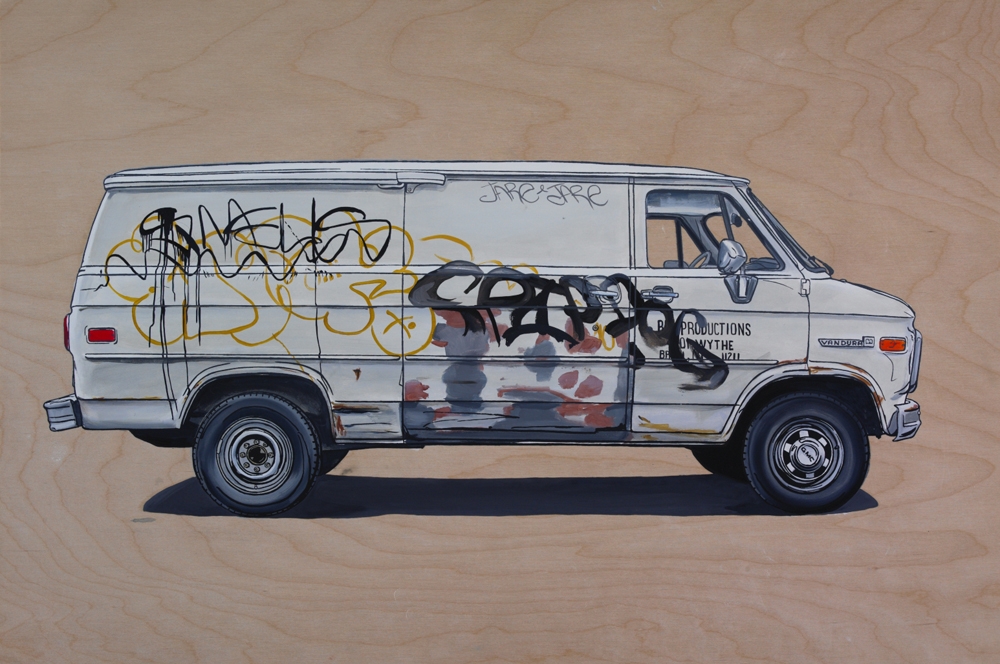 AM: From our recent studio visit with you, it looks as you may be working on some more 3-dimensional work like the tagged model Chevvy van you made previously. This is something that I’d certainly like to see more of so do you have any plans to work further in this medium or even edition one of these works?

KC: It’s something I tried a couple years ago to see if I could make a 3D object look like my paintings. There are limitations because I’m working from vintage modeling kits, so I have to do a lot of customizing and scratch building, but I’m really excited with the results. I like working in 3D format and am excited at the response so far. I’d love to work on an edition of vans and it’s something I’m looking into.

AM: Finally Kevin, give us a snap-shot of what other plans you have for the remainder of 2010…

KC: I have a little more work to do on the Camper Kart before it becomes part of the West Collection—a few, small details to the interior. Towards the end of 2010, I’ll be showing with Simon Cole at Show & Tell Gallery in Toronto. And, I’d really like to get back to Beijing to continue the Camper Bike project.

AM: Many thanks Kevin – have fun in San Francisco!

KC: Thank you, the questions were great, very well informed.