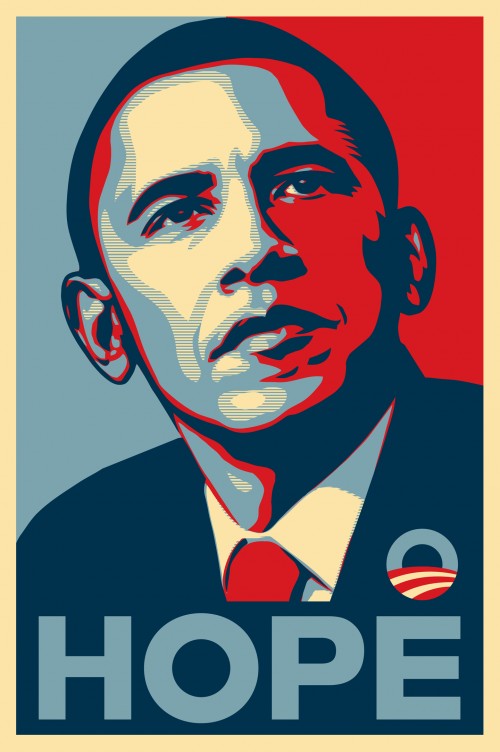 In an apparent win for appropriation and fair use, Shepard Fairey’s copyright infringement lawsuit with the Associated Press has ended not with a bang but with a whimper. With neither Fairey backing down from his stance that his use of the AP photograph for the now iconic Obama Hope campaign poster constituted fair use, nor the AP surrendering their views that Fairey misappropriated the image without proper licensing, the much ballyhooed legal proceedings have grinded to a halt in a stalemate of sorts. Of course, the undisclosed financial compensation probably didn’t hurt the efforts to amicably end the case either. And in an ironic twist of fate, one of the outcomes from the settlement appears to be an interest between both parties to collaborate on projects in the future, perhaps a signal that they have come to recognize the value of a potential partnership.

Full press release after the jump.

In settling the lawsuit, the AP and Mr. Fairey have agreed that neither side surrenders its view of the law.  Mr. Fairey has agreed that he will not use another AP photo in his work without obtaining a license from the AP.  The two sides have also agreed to work together going forward with the Hope image and share the rights to make the posters and merchandise bearing the Hope image and to collaborate on a series of images that Fairey will create based on AP photographs.  The parties have agreed to additional financial terms that will remain confidential.

“The Associated Press is pleased to have reached resolution of its lawsuit with Mr. Fairey,” said Tom Curley, president and CEO.  “AP will continue to celebrate the outstanding work of its award-winning photographers and use revenue from the licensing of those photos to support its mission as the essential provider of news and photography from around the world.  The AP will continue to vigilantly protect its copyrighted photographs against wholesale copying and commercialization where there is no legitimate basis for asserting fair use.”

“I am pleased to have resolved the dispute with the Associated Press,” said Mr. Fairey.  “I respect the work of photographers, as well as recognize the need to preserve opportunities for other artists to make fair use of photographic images.  I often collaborate with photographers in my work, and I look forward to working with photos provided by the AP’s talented photographers.”

The AP’s copyright infringement lawsuit against Obey Clothing, the marketer of apparel with the Hope image, remains ongoing.