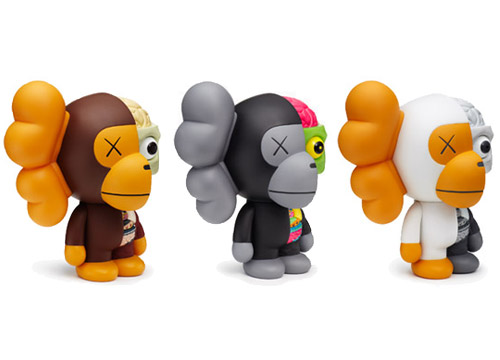 In a project that most have been aware of for quite a while, it appears that the KAWS x BAPE Dissected Milo figures will see the light of day very soon. With the character appearing on a series of shirts from a few years back, and also getting a reprise with BAPE’s 2011 Spring Collection, it was only a matter of time before it was manifest in vinyl form. Coming in at 8″ in height and most likely produced in the same editions of the past handful of releases (~1000), the iconic mascot from long time KAWS friend and BAPE founder, Nigo, will get the “dissected” treatment in the trademarked trio of colorways thanks to OriginalFake and Medicom. The timing of this release seems to coincide perfectly with the recent sale A Bathing Ape to Hong Kong retailer I.T., with the release serving as a worthwhile conclusion to Nigo’s time behind the helm. The figures are already available for preorder, albeit at a healthy premium, through the usual suspects with shipment slated for late February, but will hopefully see another kawsone release in the next month or so. Stay vigilant and keep an eye on those inboxes!