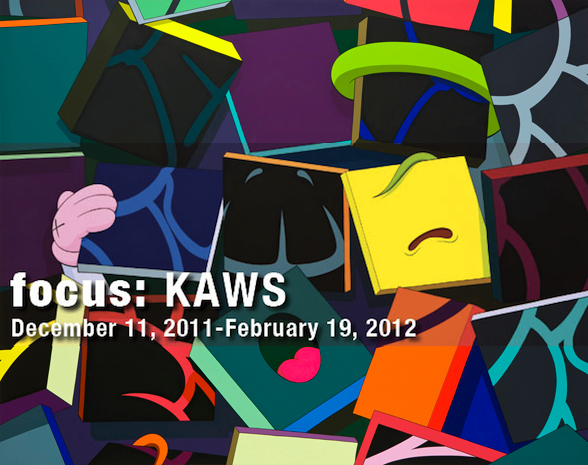 In the wake of Hold the Line last month in Los Angeles, KAWS will upgrade his relentless work ethic to the museum level over the ensuing year. We first saw the Brooklyn-based artist make his museum solo debut last summer at The Aldrich Contemporary Art Museum in Connecticut. Then, with a host of museum group exhibitions already under his belt, Jeffrey Deitch selected him for their record setting exhibition Art in the Streets this past spring at MOCA.

Now, the surging contemporary artist will have three consecutive museum solo exhibitions, each comprised of independent bodies of new and old work. Running from December 11th to February 19th, FOCUS:KAWS will kick things off at the Modern Art Museum of Fort Worth. The exhibition will consist of eight new works, the focal point being a set of 21 tondos akin to – or the same as – his Armory Show installation earlier this year. The grand museum tour will then continue on to Atlanta’s High Museum of Art in February and move to the Pennsylvania Academy of Fine Arts in Philadelphia next summer. If the insatiable demand for his work at the gallery level wasn’t evidence enough of his increasingly influential place in the fine art community, these museum solo shows will further cement the significance of one of the hardest working artists operating today.