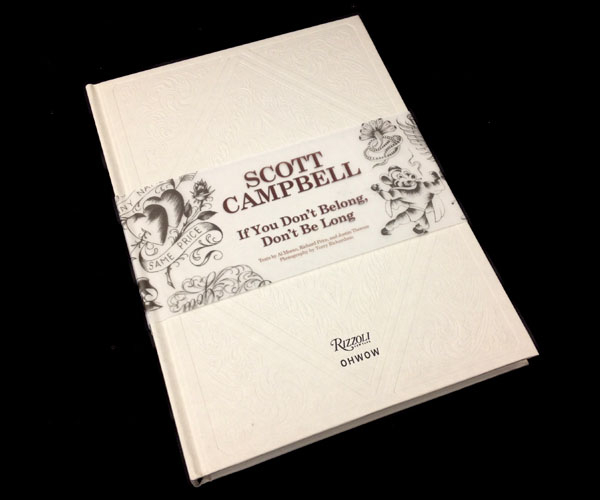 As we mentioned last year, Scott Campbell’s first book, If You Don’t Belong, Don’t Be Long, is now fully baked and ready for consumption. Published by Rizzoli and OHWOW, the hardcover monograph chronicles the origins of, parallels between, and indelible influence of his tattoo work and his fine art, with his cut-currency sculptures already making headlines again this year during showings in both Zurich and Singapore last month. The comprehensive 208-page publication is as rich in imagery as it is insightful in commentary, including a series of salient texts from Al Moran, co-founder of OHWOW, Justin Theroux, actor, screenwriter, and director, and Richard Price, American novelist and screenwriter, along with photography provided by the one and only Terry Richardson. Not set to officially drop until next week, the fine folks at OHWOW have quietly offered up a very special signed and doodled edition limited to just 50 copies now available in their webstore. Here’s your official heads up, so if you are a fan – move quick to grab a copy before it’s too late.