After almost a year since his sell out solo show in US (covered), Carl Cashman is currently finalizing works for his UK solo debut at Prescription Art Gallery in Brighton on the 6th of June. Titled Neometry: New work by Carl Cashman, the show will be introducing brand new geometric-based works made with primarily neon colors, as a part of his ongoing Op-Art works series.

For this show, the British artist decided to further explore his distinctive style and concept, creating new patterns and incorporating it on different objects and surfaces. Along with painting with acrylic on wooden panels as his signature medium, he also created some unusual interventions on found paintings as well as re-purposed objects for this show. His intricate woven motifs look like the result of a computer algorithm gone wild, but being painted by human hand, they get an entirely new appeal and meaning. By making them less predictable and bravely entering the non-symmetry zone, the Totnes-based painter blurs the line between analog and digital. His new works, especially clustered ones, seem to be even more precise and sharp, while richer and more complex at the same time. Also, by applying his “geometry” elements to found objects or paintings, he is opening a gate between his strict geometric world and reality, getting a very effective and visually challenging result.

We recently met up with Carl at his studio in order to ask him few questions about his new works, his work practice, as well as have an exclusive peek into body of work he created for this exhibition. 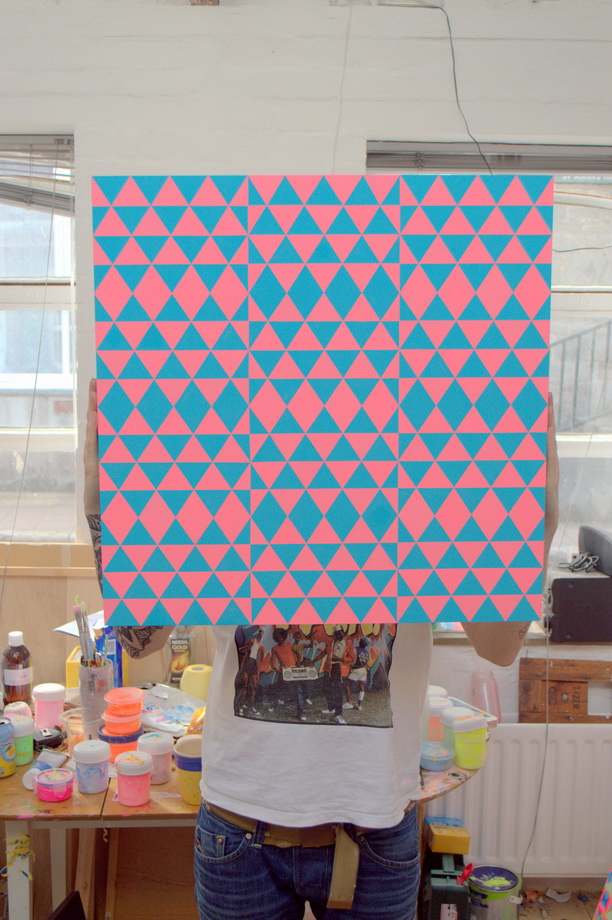 Arrested Motion (AM): How does it feel to have a sell out debut solo exhibition under your belt? I guess not many people can add that to their CV!

Carl Cashman (CC): YeS that is/was pretty surreal. When I arrived in Portland, me and Paige set a bench mark of 50% sales which I didnt think we would achieve.. so to sell out and especially to do so before I’d got back to the UK is pretty mind blowing.

AM: And did that show open up any new avenues for you? Have any discoveries or realisations about your work presented themselves to you on the back of that?

CC: The main thing to come from the back of that was the chance to work with Andrew Hosner at Thinkspace Gallery. I think I’ve had 5 group shows with them since last summer and each in a new distination which is great for me getting exposure. Knowing you have shows lined up quite a way ahead is great. For once, all I have to do is paint and remember my deadlines. 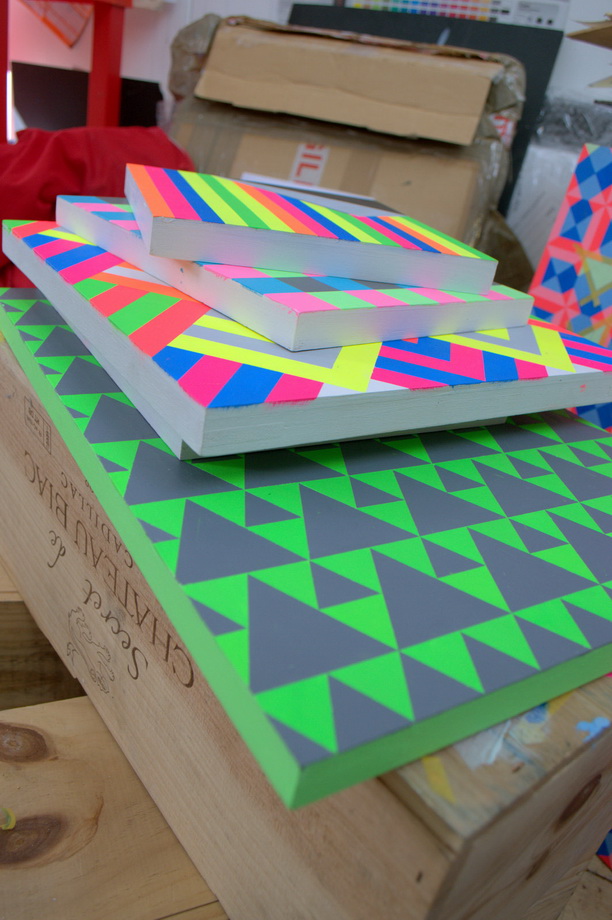 AM: So you have a new solo exhibition coming up in Brighton at Prescription Art. Can you tell us a little about that? What sort of works do you have in progress for the show?

CC: Its’ a bit of everything really in the few variations of what I do. The sizes range from 8×6 inches up to 24×24 inches. I’ve found some old cricket bats too which I think make a nice set to follow up the skateboards in the states.

AM: Tell us a little about your term ‘Neometry’.

CC: I found it hard to explain what my work was to people that hadn’t seen it, so ‘neon geometry’ came about as people would end up presuming I was making some kind of far out backdrops with magic mushrooms on. You never know, it might catch on. It would be great if other people started to use the term. 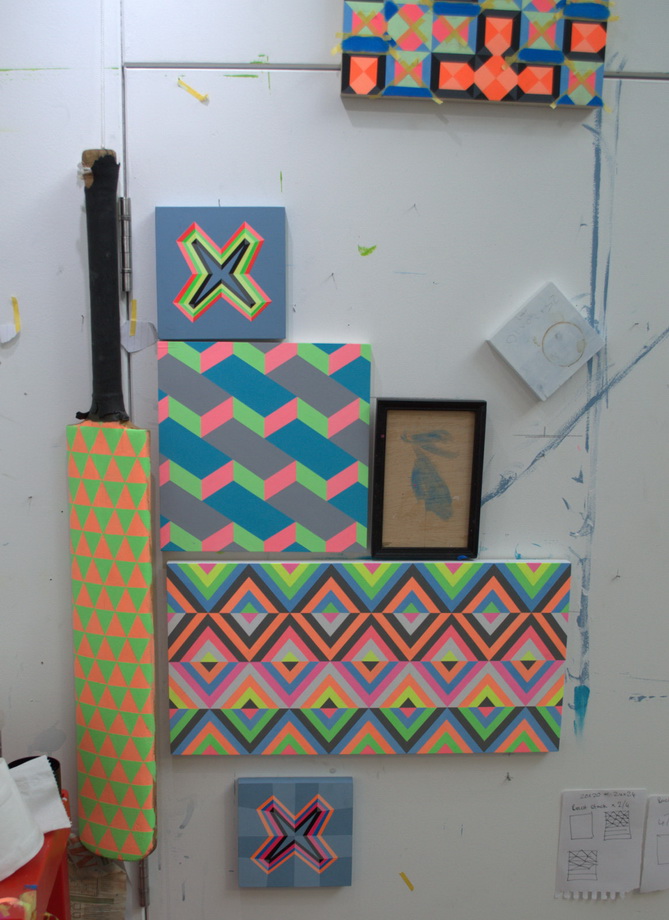 AM: The colours in your work present themselves in a completely different light when they are put under UV black light. Is this something that was one of your initial intentions, or did that discovery come later?

CC: Admittedly, it was an accidental discovery, I mean I knew that the works would glow due to how I mix my colours.. but I had no idea they would have the extra dimension that they do.

AM: Can you expand on your background on a personal level? What was your path of study that brought you to now being able to work as a full time artist?

CC: I was kinda the generic lad at school, could do better but was having too good a time with friends to really get any decent grades. From there it was studying art at college before heading off to uni. Again, I dont really think I took full advantage of the studying but moved to a beautiful part of the country and made some great friends. My experience of working full time as an artist is a bit like uni, I’m broke 70% of the year and live off beans on toast. Although now I’m constantly working and have very little social life, so I guess that is the only difference. 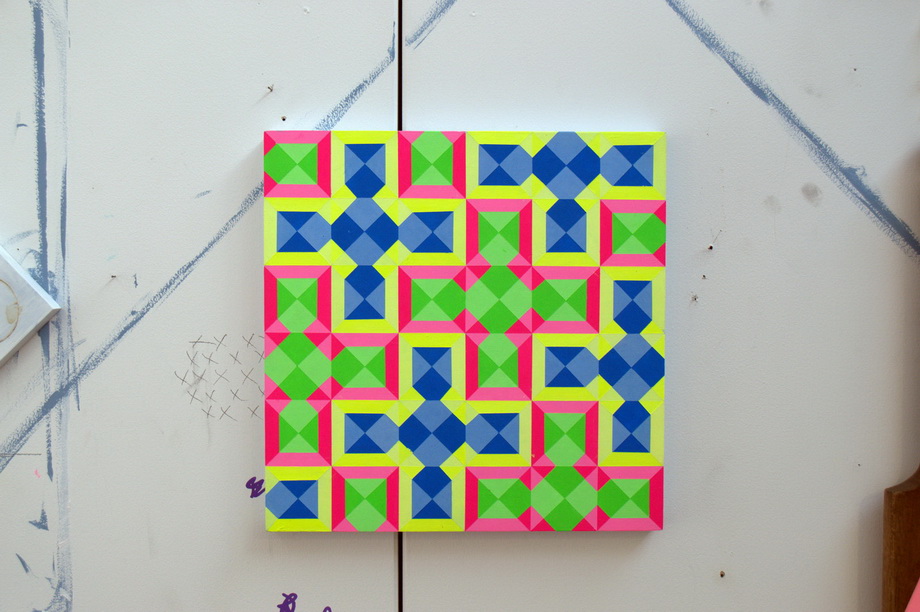 AM: You’ve been experimenting with multiples and ceramics lately. Where has that led you in terms of pushing your practice into further territories?

CC: The ceramic works have been fun to do, although not being in control of what happens in the kiln is something I need to get used to. Consistency has been an issue with those and I think I will be looking to purchase my own kiln before really getting stuck into those.

AM: Any new developments or experimentations you have planned?

CC: Yeah, I have a project planned for next winter, the content will still be goemetry based but the final outcomes are completely different to anything I’ve done before. I’m moving studio real soon too, so will have 4 or 5 times the space to use. I definitely want to scale up my paintings and also start making some sculptures. I’m really enjoying helping out with festival decor too which has reignited my interest in installation art. Making work that will last no longer than a week is refreshing too and making art for arts sake without having to consider the work being sold. 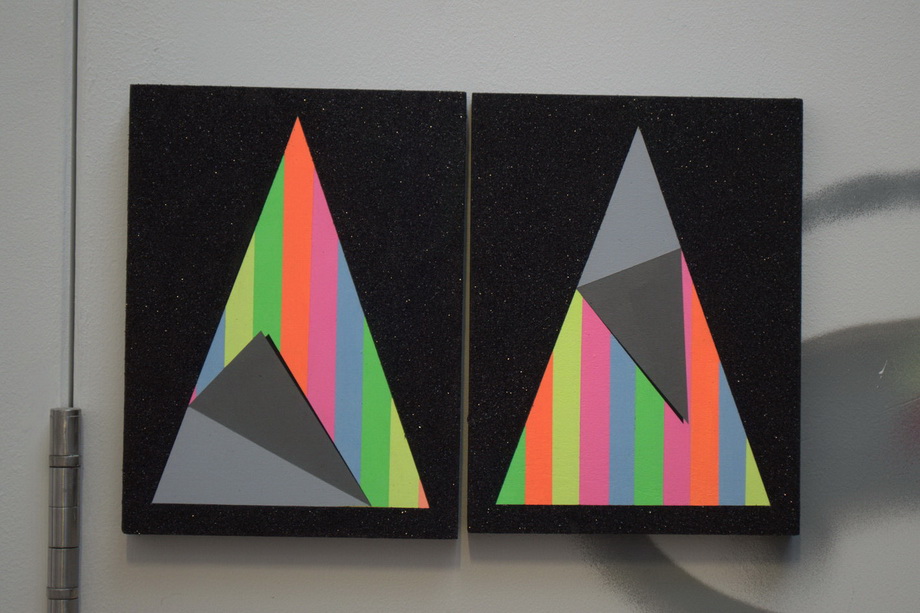 AM: Can we return to the work you’re making now, that you’ve become known for? The meticulous patterns must take a long time to plan. Would you say you’re a patient person? Tell us a little about your process…

CC: I think making this work has definitely taught me to be patient… sometimes I wish I worked a bit more loosely so it could be a bit more spontaneous. Most ideas start from the sketch book, then a graphic pad before being drawn onto the surface. I don’t use a computer for any of the process as I like the idea of learning a proper skill along the way like draftsmanship. I guess the only thing I really rely on is my tape, I have started practicing each day and working free hand – kinda like a brain exercise before I start working. 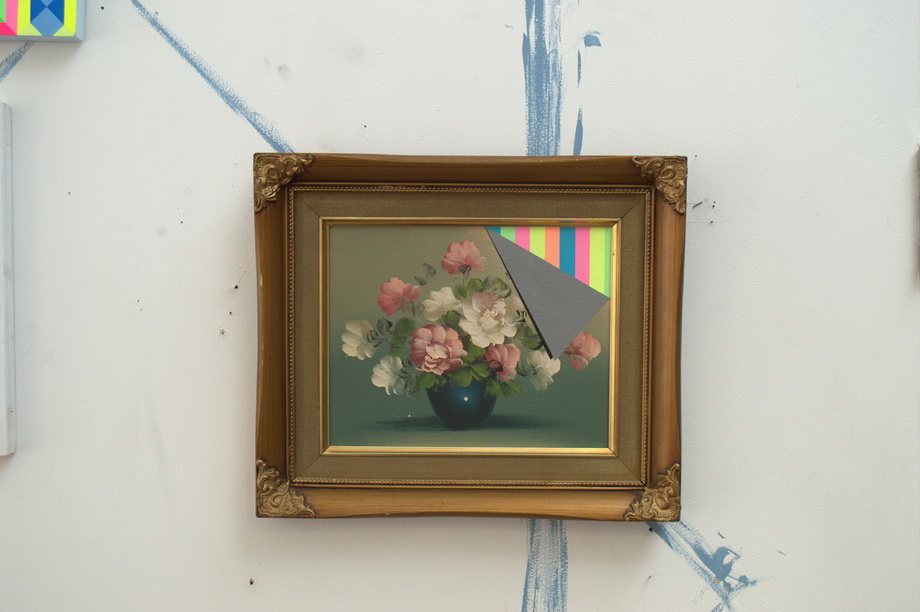 AM: Is there a limit on how long you can work? How are your eyes at the end of a painting session?

CC: It is quite draining at times, although when my attention span is low I will work on lots of pieces at once which is good for keeping me productive. It is also quite meditative though, as long as I’e got the prep work done right, I can switch off to a podcast while filling in the colour.

AM: You’re based in Devon. Tell us a little about your routine and your studio…

CC: I tend to get to the studio around 8 or 9 am and then work through until 4ish, then it’s home for food and generally another few hours from 6-10. Most of the time it’s painting in the day and sketch book stuff or panel prep in the evening. I try to limit how many days I work, but it’s generally 6 and then a couple hours on a sunday morning. I feel guilty when I’m not working. I don’t want to waste the opportunities that for some reason have come my way. 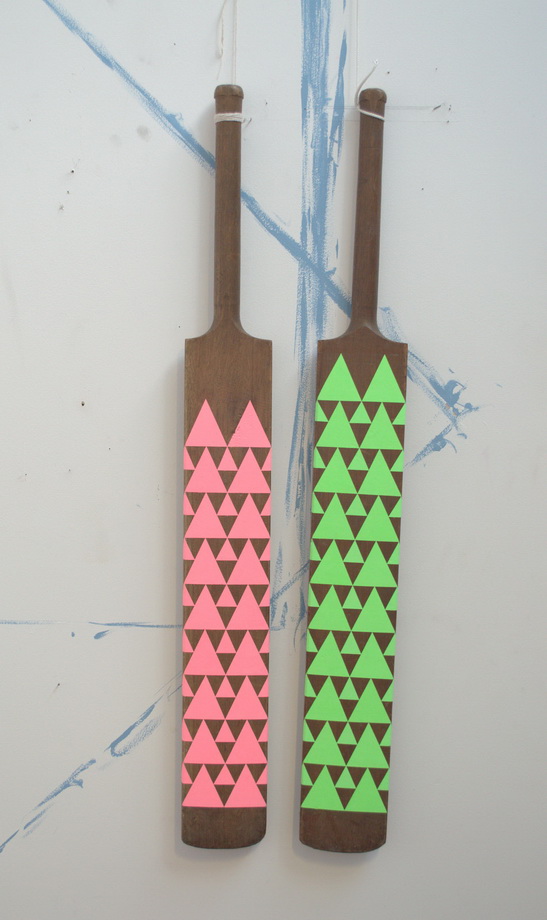 AM: And just to round off, what other plans do you have beyond the solo exhibition at Prescription Art?

CC: It’s festivals for me next, helping out at Glastonbury and maybe a couple of other festivals with decor and then back to the new studio. I’m hoping to do a bit of traveling next winter too for some new inspiration.

AM: Thanks for your time Carl. Good luck with the show!