Last year, during a visit to San Francisco, AM got to visit the studio of artist Ben Venom. His unconventional approach to art making through traditional quiltmaking and embroidery practices first caught our eye a few years ago. Using heavy metal iconography in the form of cut-up t-shirts, Venom plays both hard and soft together by recontextualizing heavy imagery with soft fabrics in the form of quilts.

Working from his home studio in the Upper Haight, Venom greeted us in a HM t-shirt and baseball cap. He fell into quilting almost by chance when he decided to make something large for an international exhibition he was invited to participate in. After learning how to stitch during his time at SFAI (where printmaking was his main focus), he decided to use some of his collection of metal t-shirts to make an artwork easier to ship to Berlin than a framed piece.

From those humble beginnings, Venom has honed in on a style he has completely made his own. His unique practice tells a story or matches a soundtrack that many sub-cultures can identify with. You don’t need to be into metal to connect with Venom’s unconventional work, although of course it’s an easy point of access.

Venom’s supply of t-shirts and material comes to him from many different sources. His own collection of shirts was of course the beginning, but thrift stores are goldmines and donations and contributions from friends keep pouring in also. What better way see your old Dio shirt re-used than in a piece of Venom’s art?

The sewing machine is the centre-piece of the studio, and where the magic happens. Dotted around the room are pieces of ephemera from Venom’s past practices, a healthy collection of baseball caps and a couple of creative home security devices in the form of a studded club by Lucien Shapiro and a killer engraved machete made by Bill McRight.

Venom’s work features in Man-Made: Contemporary Male Quilters opening January 25th at the Craft and Folk Art Museum in Los Angeles. Catch his work also at the currently running Platinum Blend exhibition at Modern Eden gallery in SF curated by Stephanie Chefas. Watch also for his upcoming exhibition following a well deserved residency at the de Young Museum in San Francisco this May. 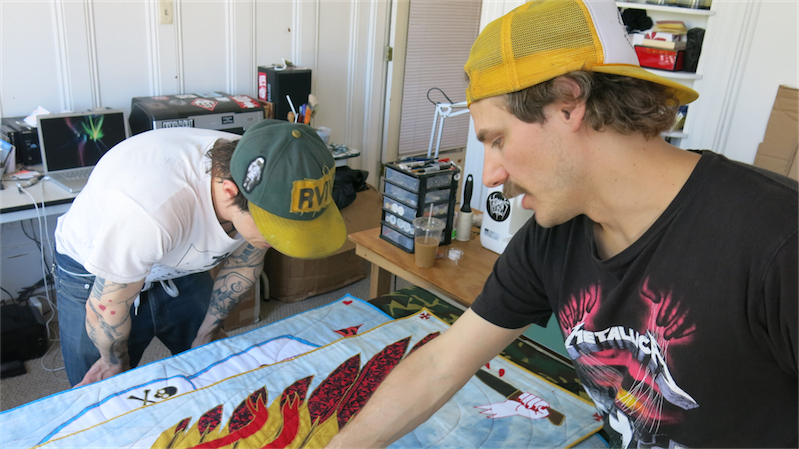 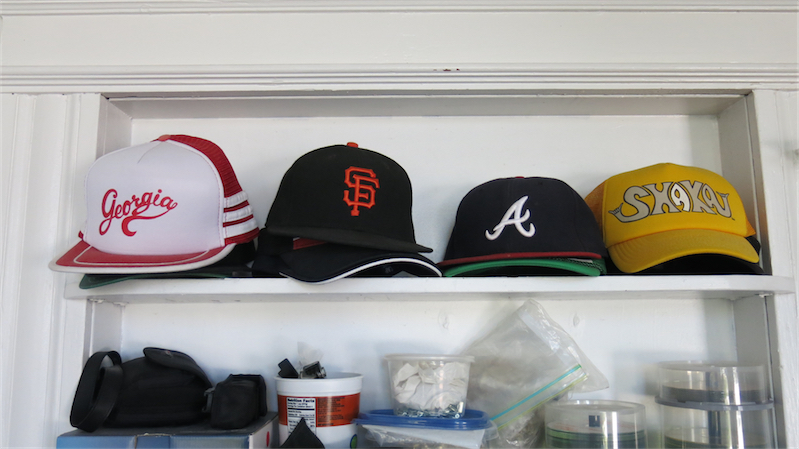 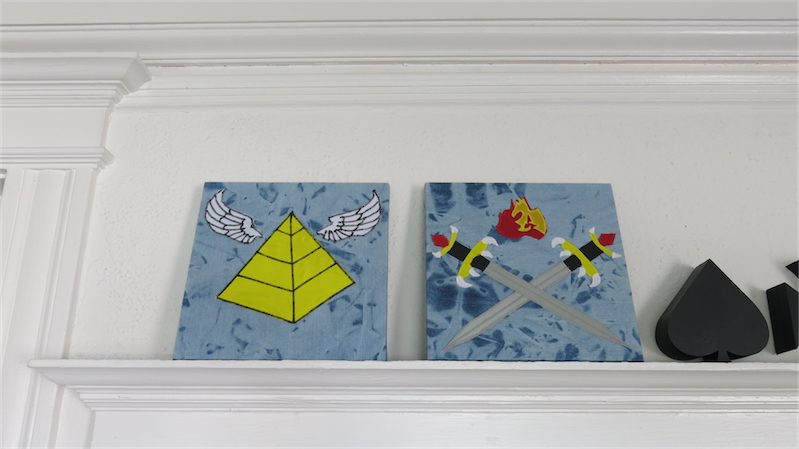 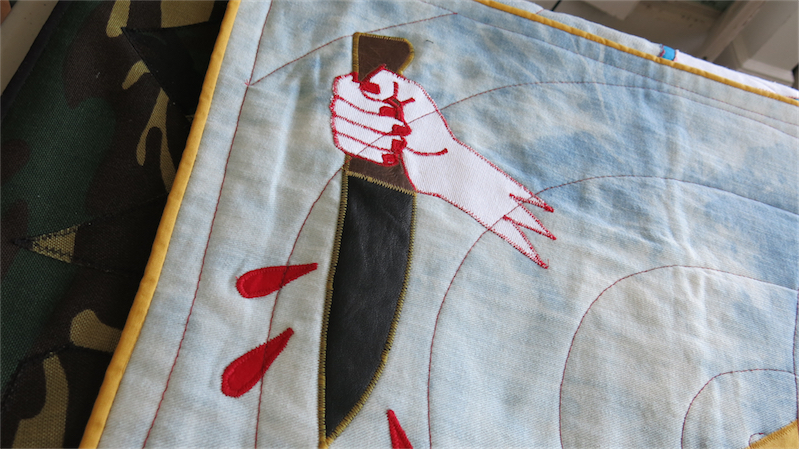 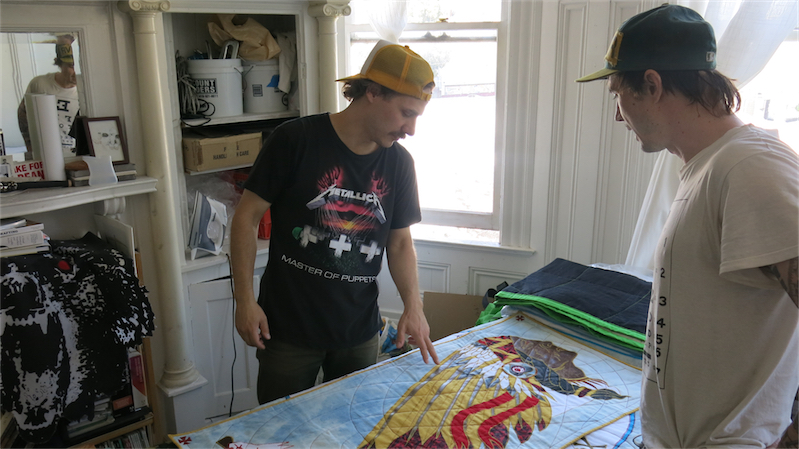 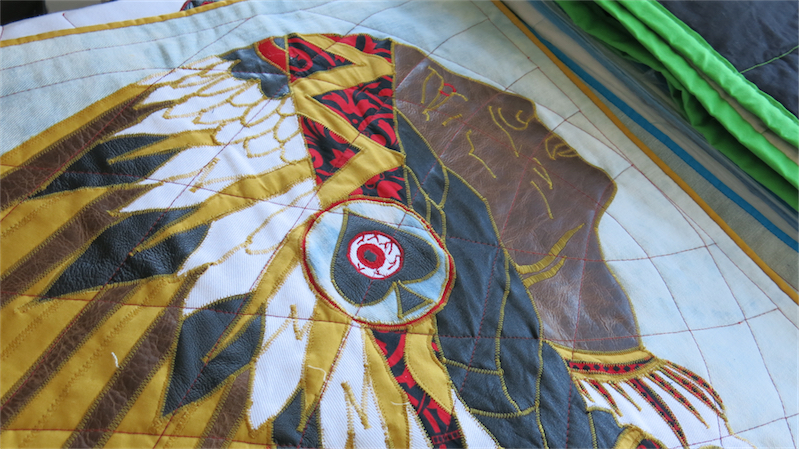 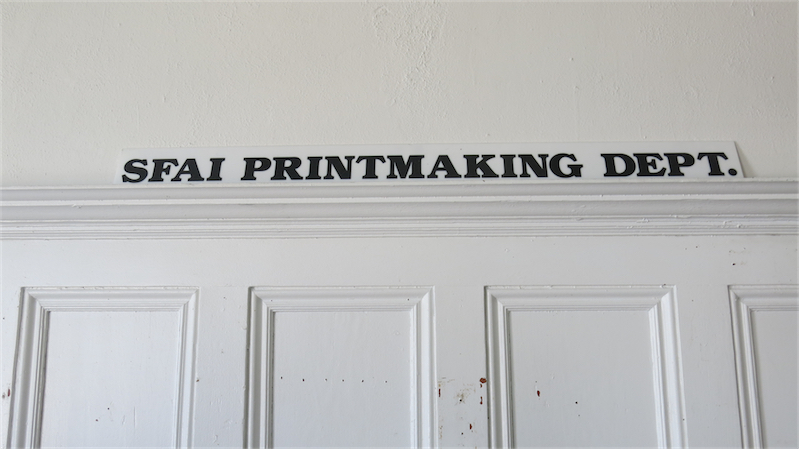 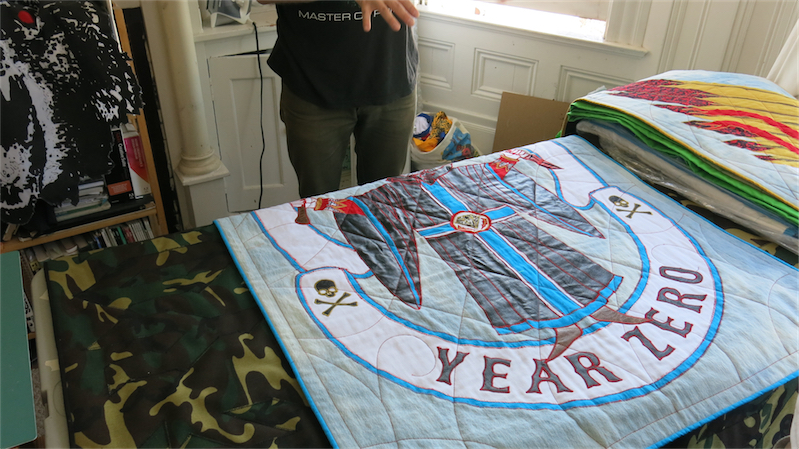