It’s been some time since Pictures On Walls has organised an art exhibition. The previous one was in December 2013 with the Shok-1 solo show, X-Rainbow. Last year, POW gave up its premises on Commercial Street in East London. With a permanent show space no longer retained, the number of print releases in 2014 restricted to a small handful (by Paul Insect, Maya Hayuk and Invader), and plenty of competitors arriving on the street art scene eager to fill the void, many wondered what the future had in store for the pioneering company.

Those on POW’s mailing list were therefore caught pleasantly off-guard when, shortly after midnight on Thursday 5 February, they received an email announcing a surprise opening later that same day in an empty shop in Soho. Public Execution would be the first UK exhibition by French artist and DMV crew member, Dran, since Marks & Stencils (covered) and I Have Chalks (previewed) in November and December 2010.

The twist was that the work had not yet been produced. Instead, for the duration of the event, Dran would be “creating an art show from scratch in full public view”. The invitation confirmed that once all the artwork is completed, the show “will close immediately”. With Saturday 21 February announced as the final day, presumably Dran will keep painting until the evening of this date. 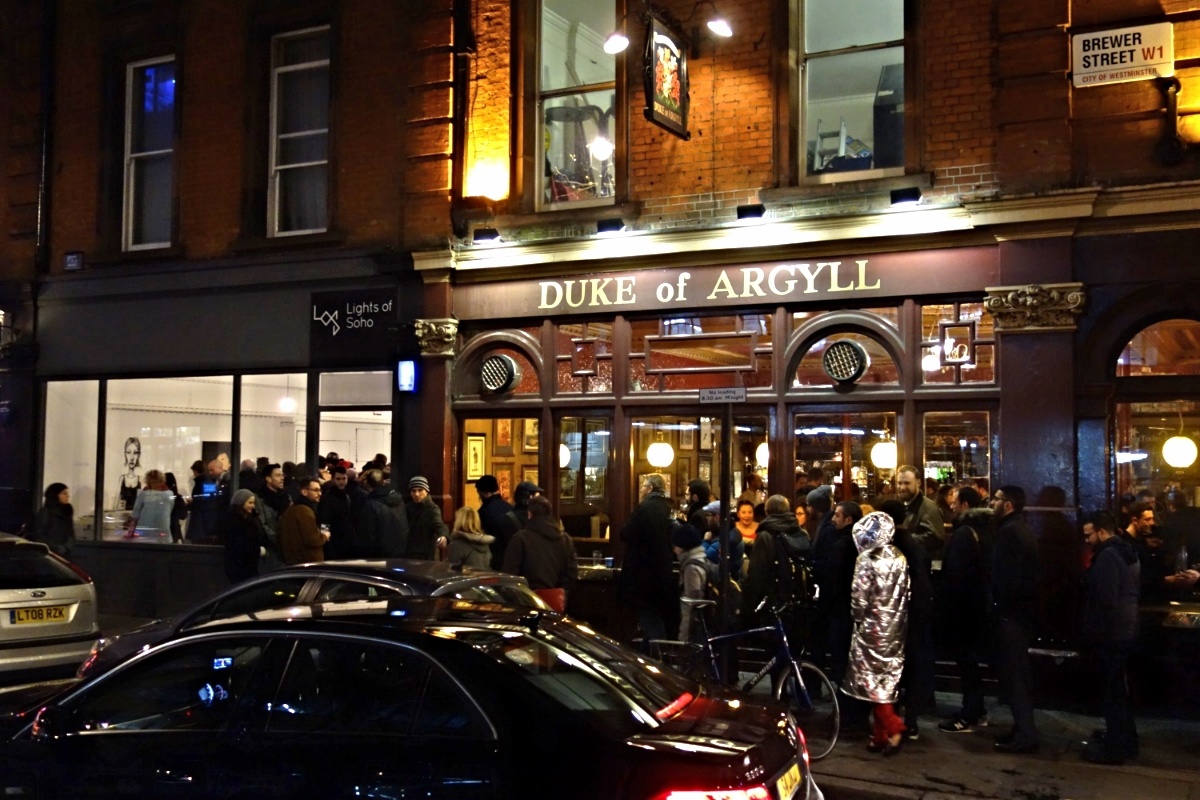 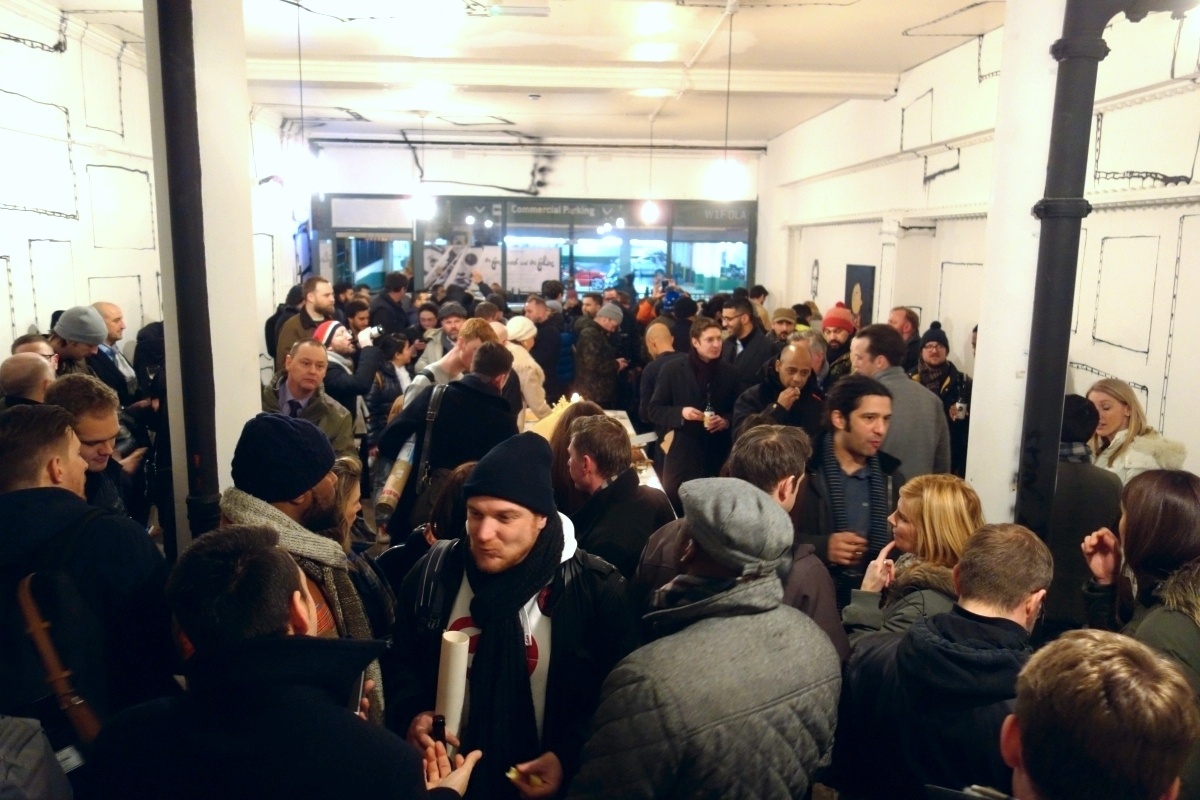 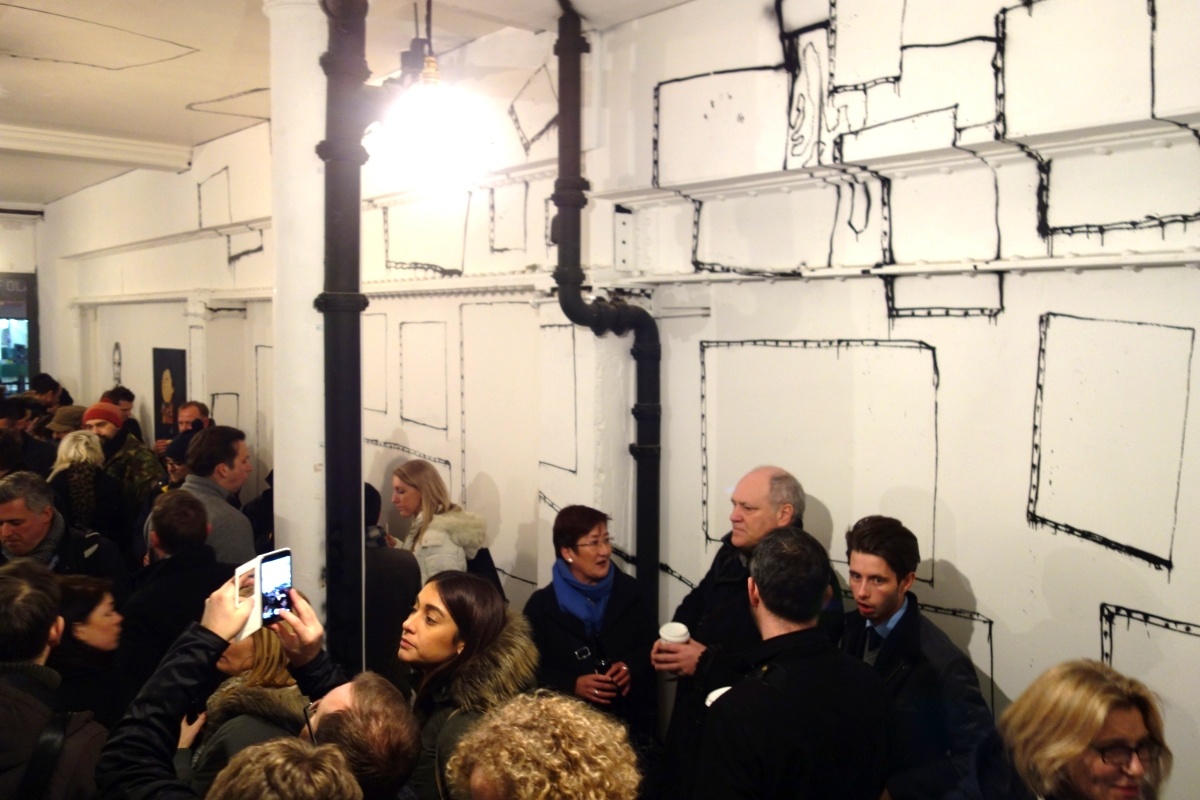 As a concept, Public Execution​ is refreshing. Focus is shifted away from static end products. And greater emphasis is placed on the process, finding art in the act of creation. In spirit it’s similar, and possibly a conscious nod by Dran, to ritualistic sandpainting.

The exhibition also brings to mind the proverb, “Life is a journey, not a destination.” By its very nature, it encouraged repeat visits in order to follow the progression and evolution of the body of work throughout the show. 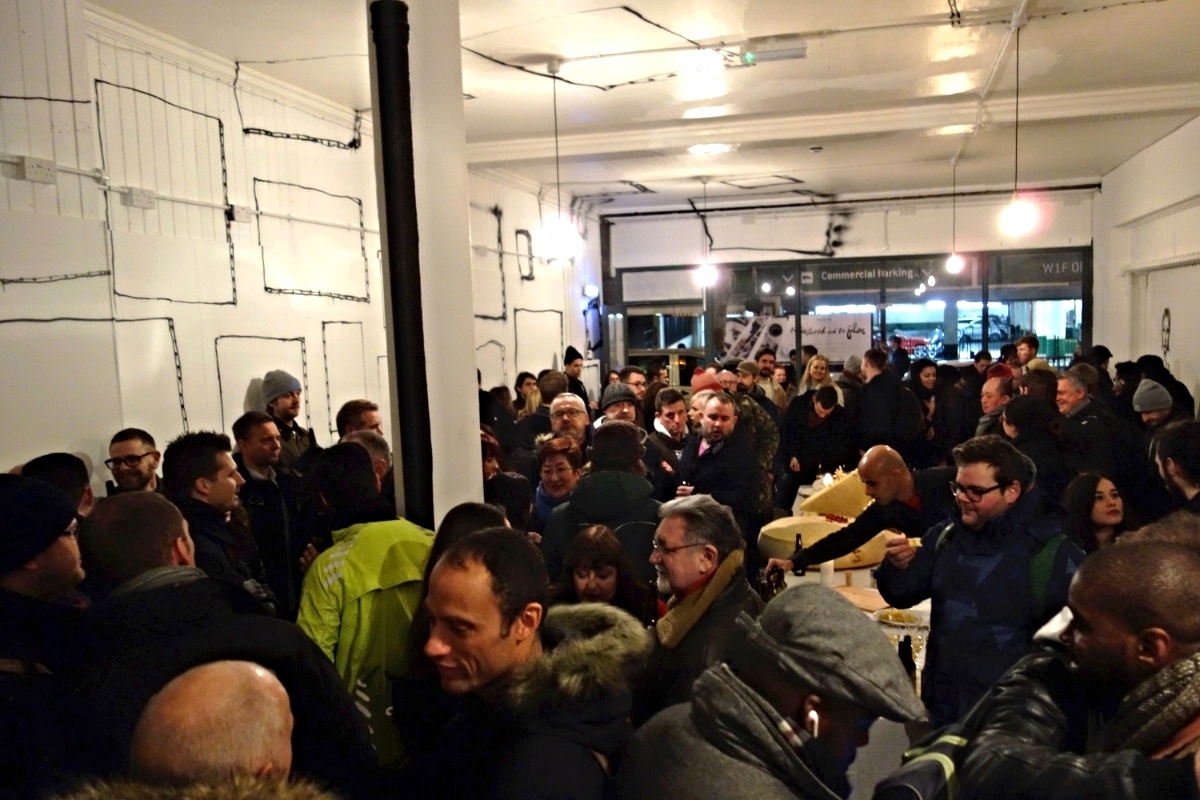 The opening for this pop-up was a surreal, bemusing experience. Upon entering the disused shop space, people were greeted by white walls and a white ceiling spraypainted with images of different-sized blank canvases. It was less of an art show than a show of support for an artist by his fans at the initial stage of his project. Perhaps akin to being in a crowd cheering on runners at the start of a marathon, or a celebration held just before construction of a new building commences.

Those hoping to purchase artwork on the night were without luck. They had to make do with the complimentary white wine, ale, artisanal bakery bread, cherry tomatoes on the vine, and a full wheel (weighing an estimated 35 kg) of French Gruyère​ — which must be the equivalent in cheese of an average weekly salary. 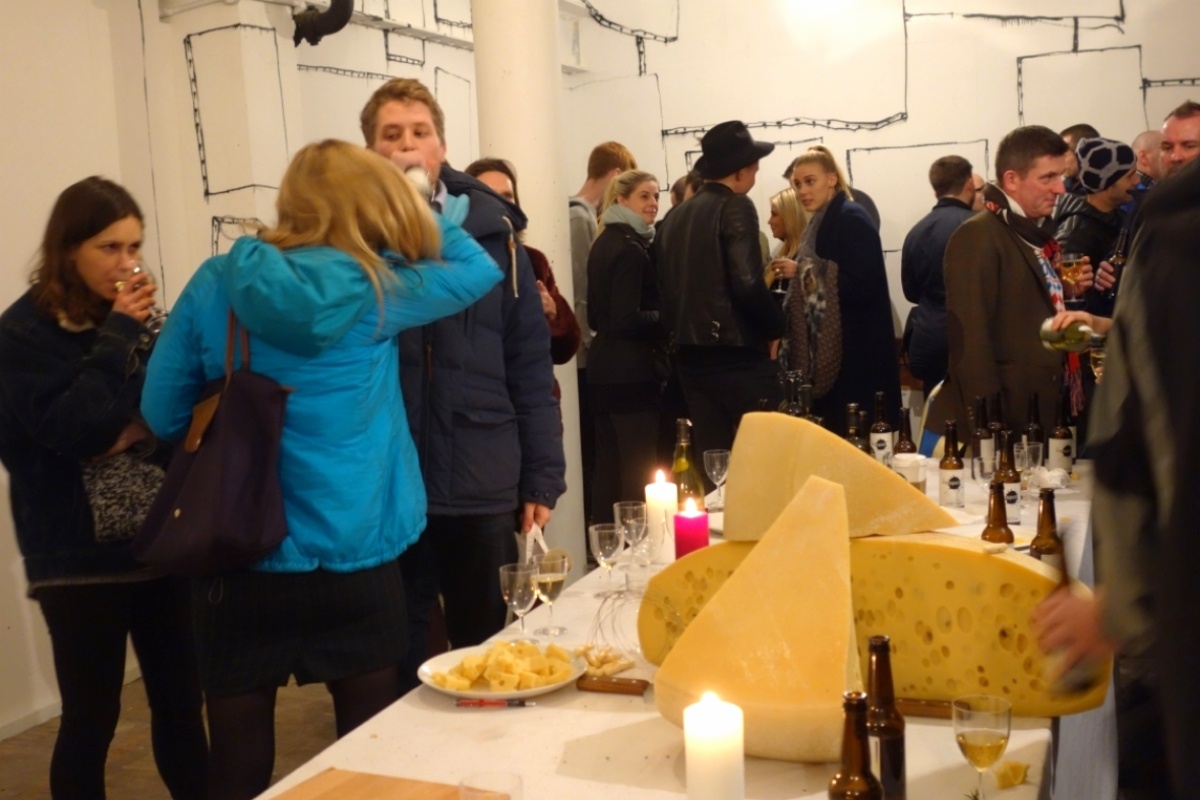 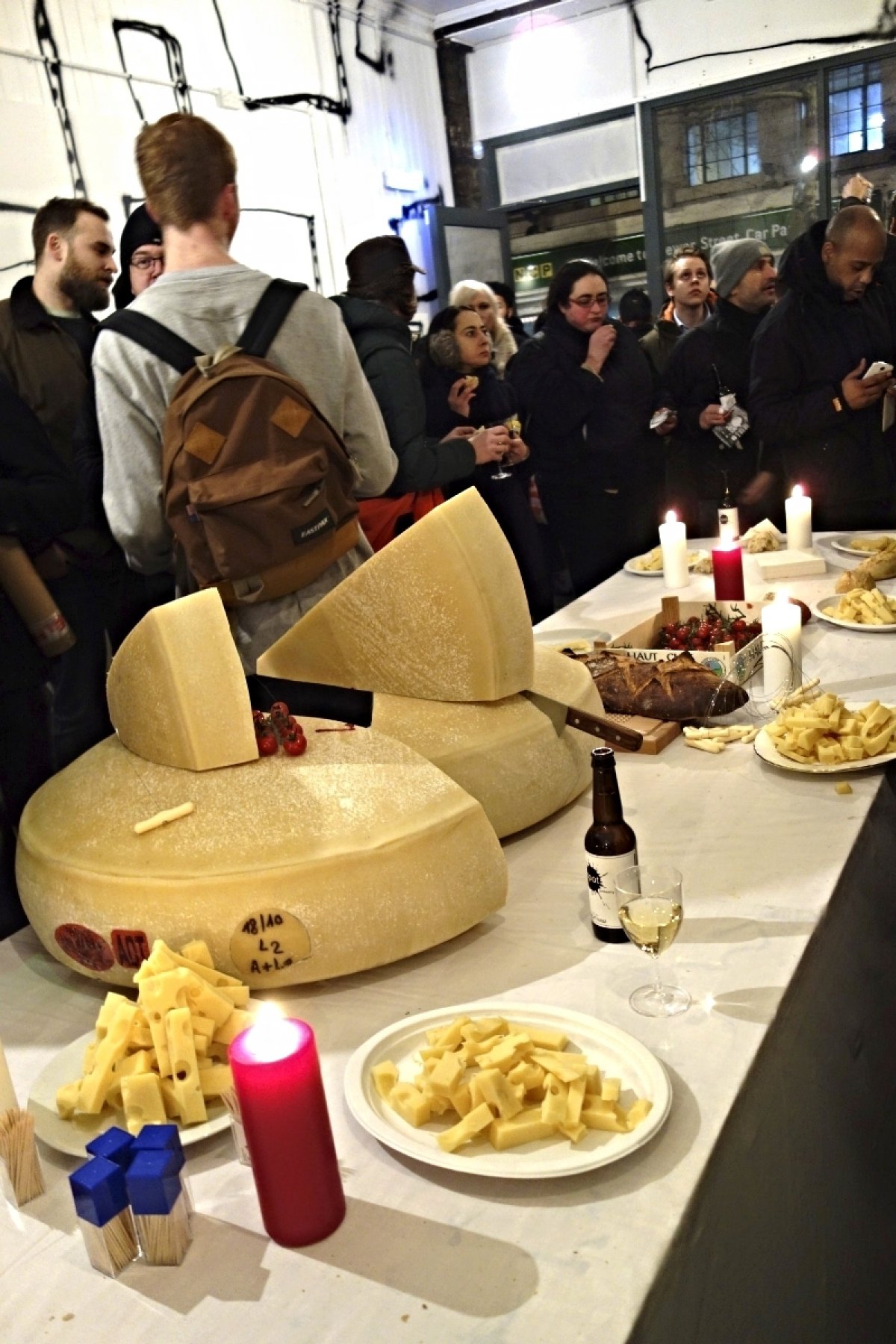 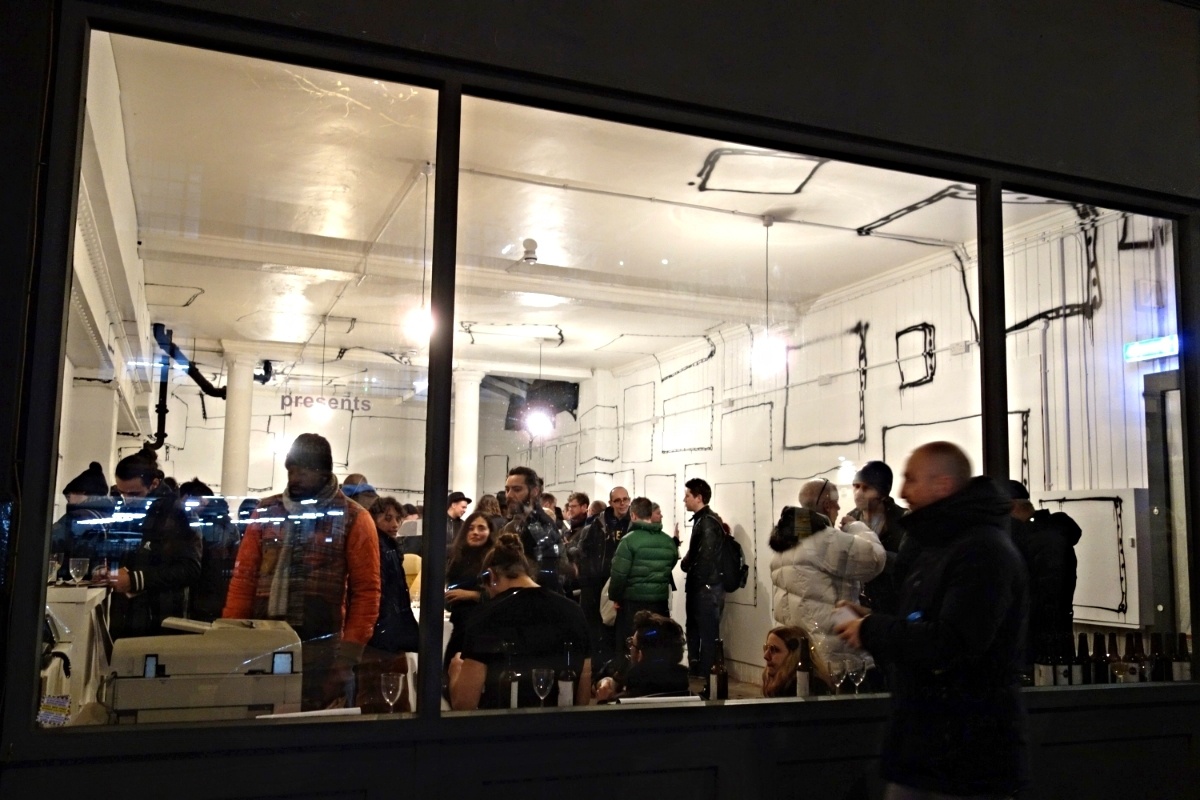 Contrary to what had been suggested on the POW invite, Dran himself wasn’t schmoozing or painting on the night. This was perhaps the main disappointment of attendees at the opening, although it’s also consistent with the POW modus operandi, which often favours a haphazard approach of last-minute changes, improvisation and a bit of chaos. Either charming or frustrating, depending on one’s mood or personality type. What’s also clear is that, had the artist been making the rounds that evening, he would have been mobbed with requests for sketches. The atmosphere in turn would have been very different, and probably much less cordial. 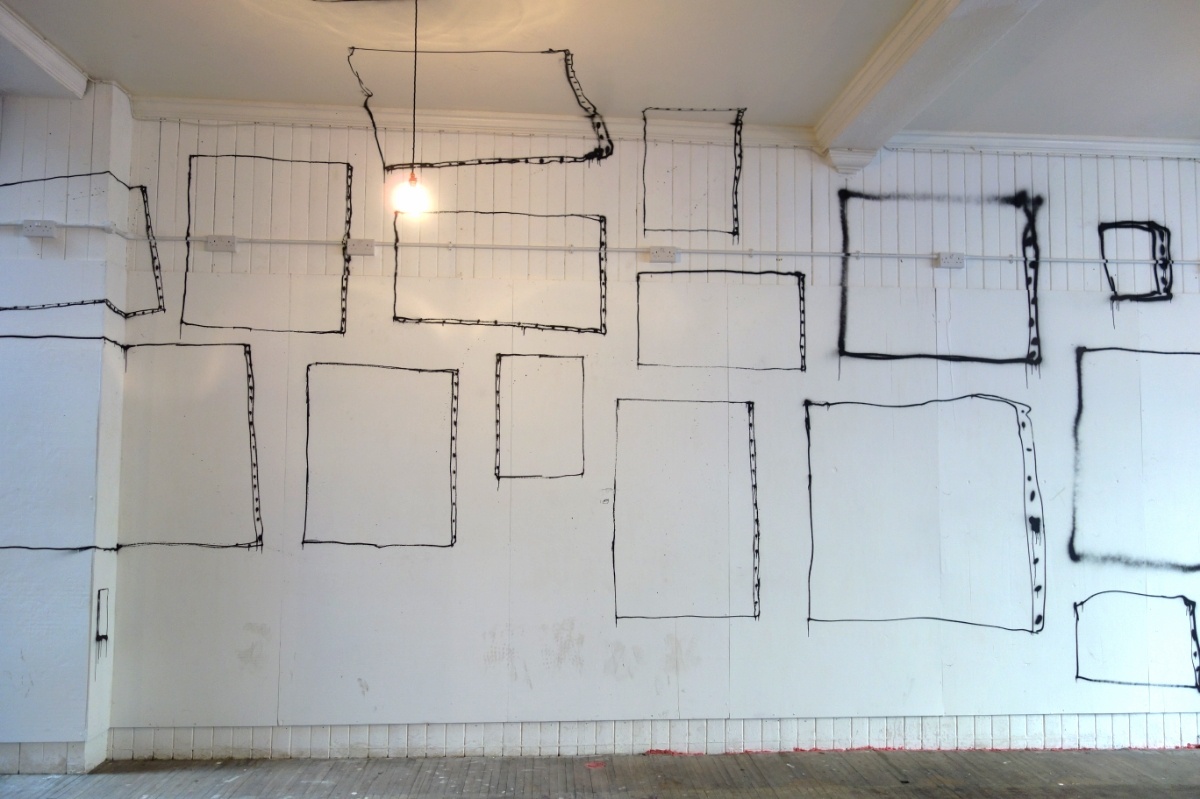 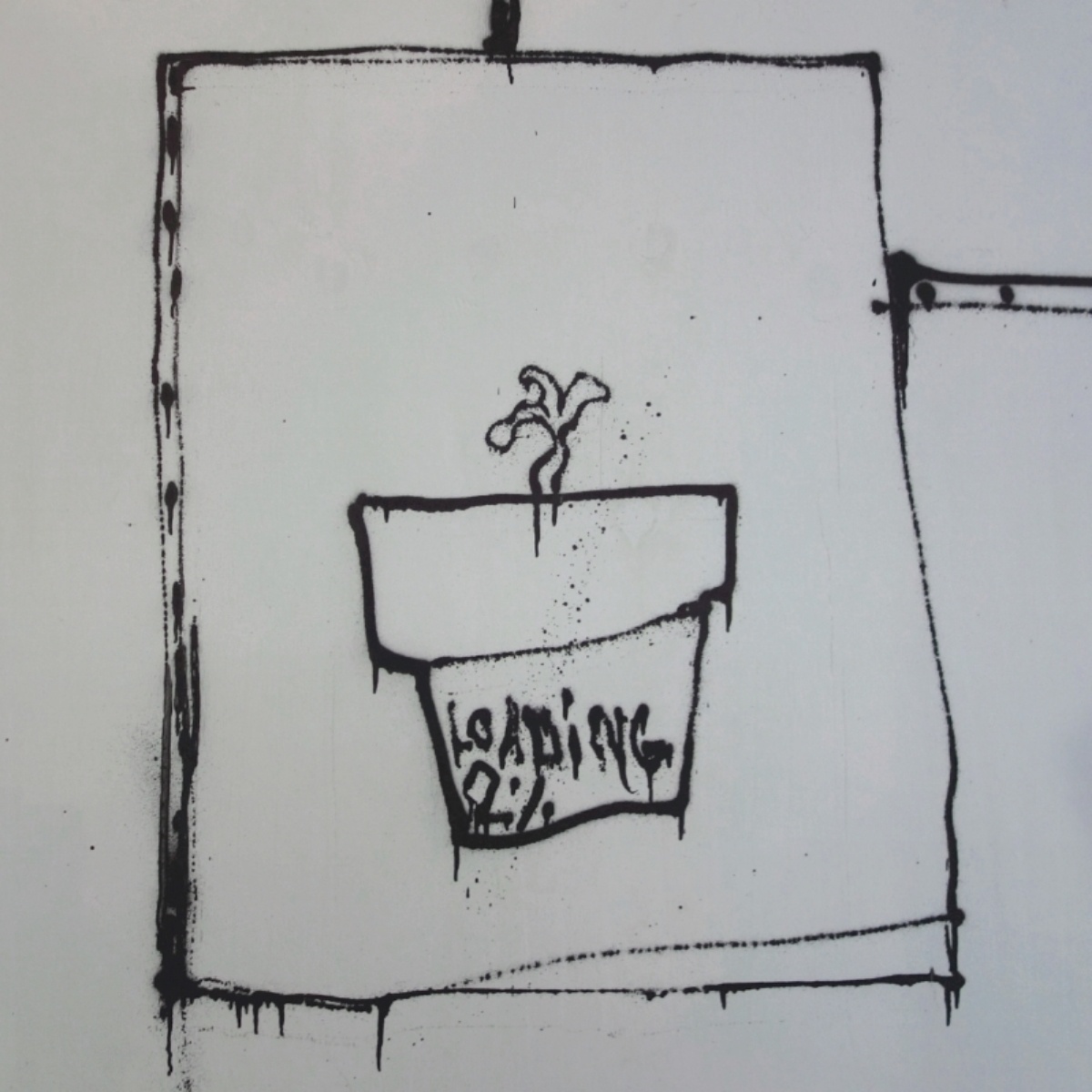 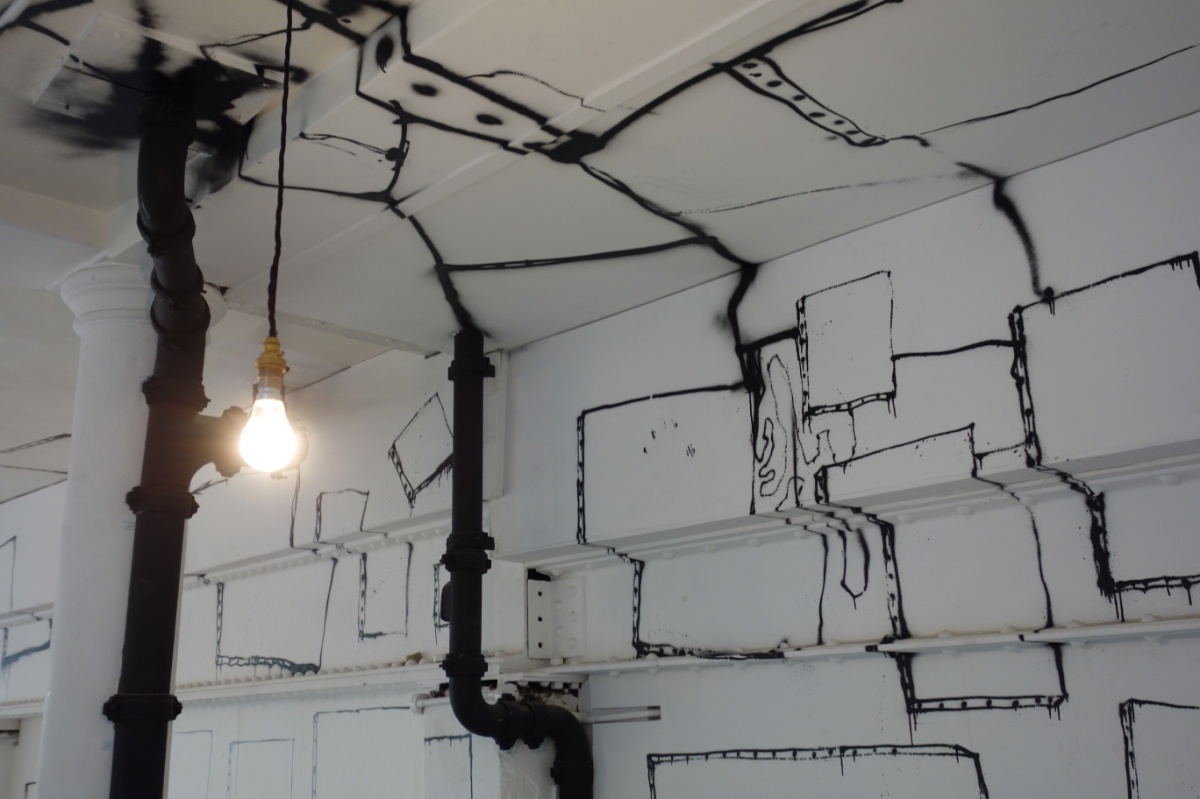 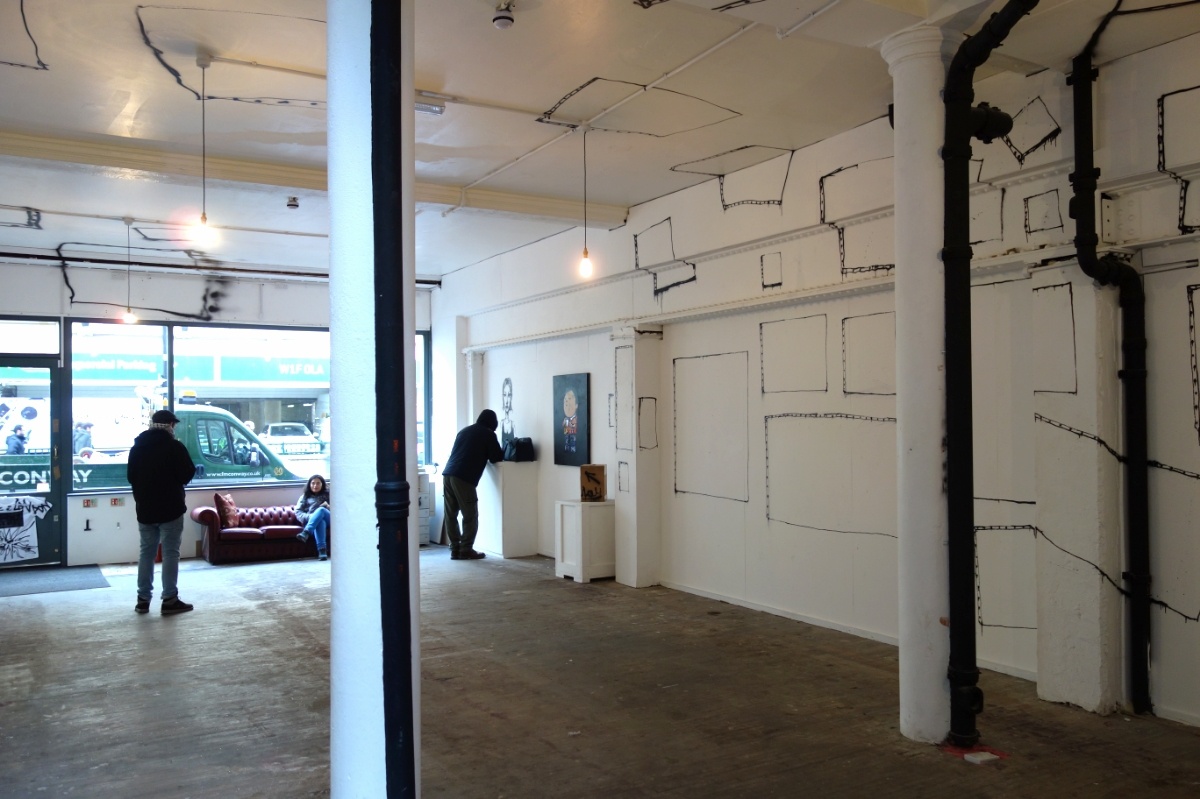 As an exception to the images of blank canvases, Dran had painted a gallery receptionist on the wall by a counter supporting a faux laptop and pens. In addition, a mixed media canvas was on display, measuring around 40″ x 30″ and called Milky Way. It featured a boy wearing clothing made of junk-food packaging — perhaps a reference to nutrition in contemporary Western society, or a take on sayings like “You are what you eat” and “Clothes maketh the man.” 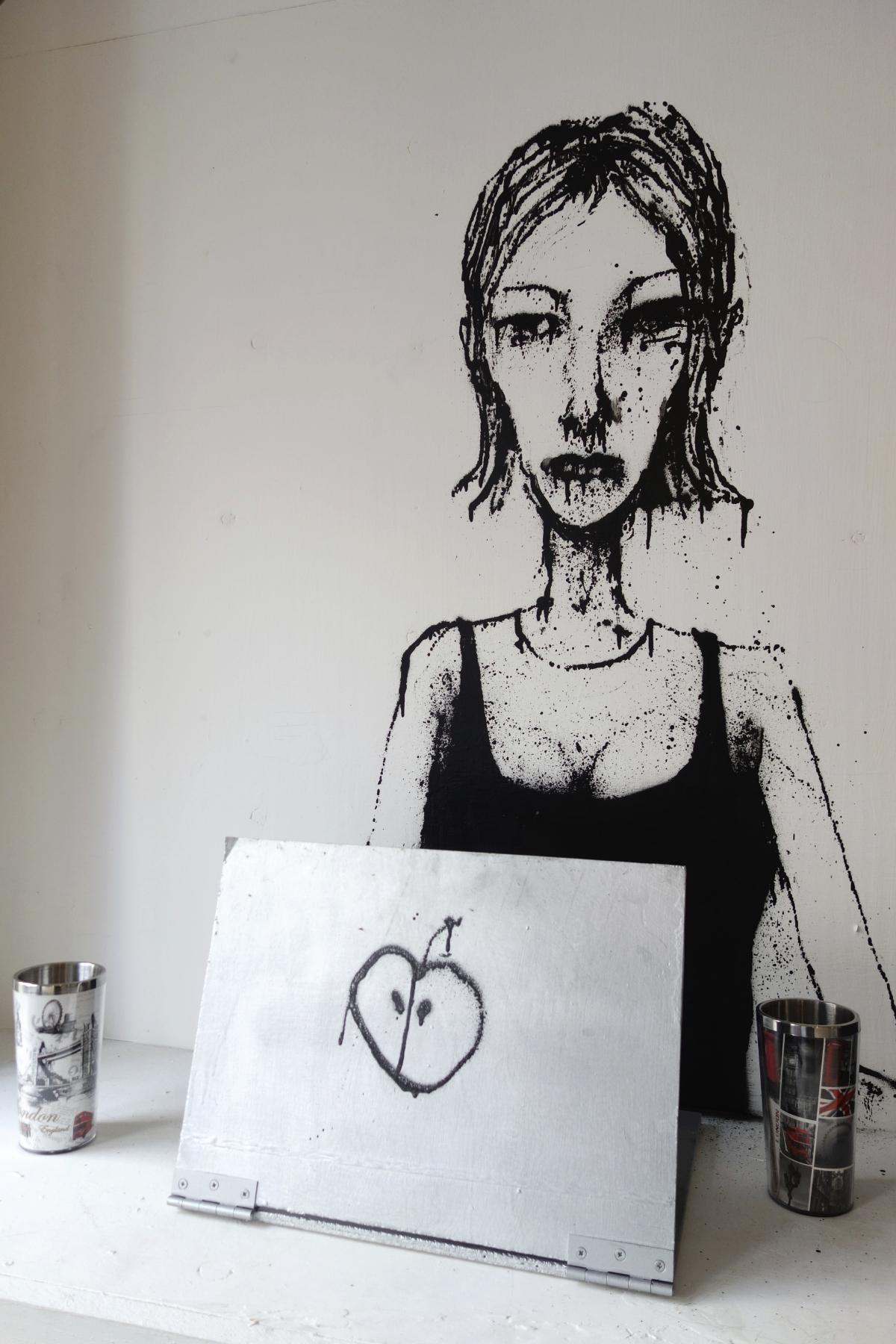 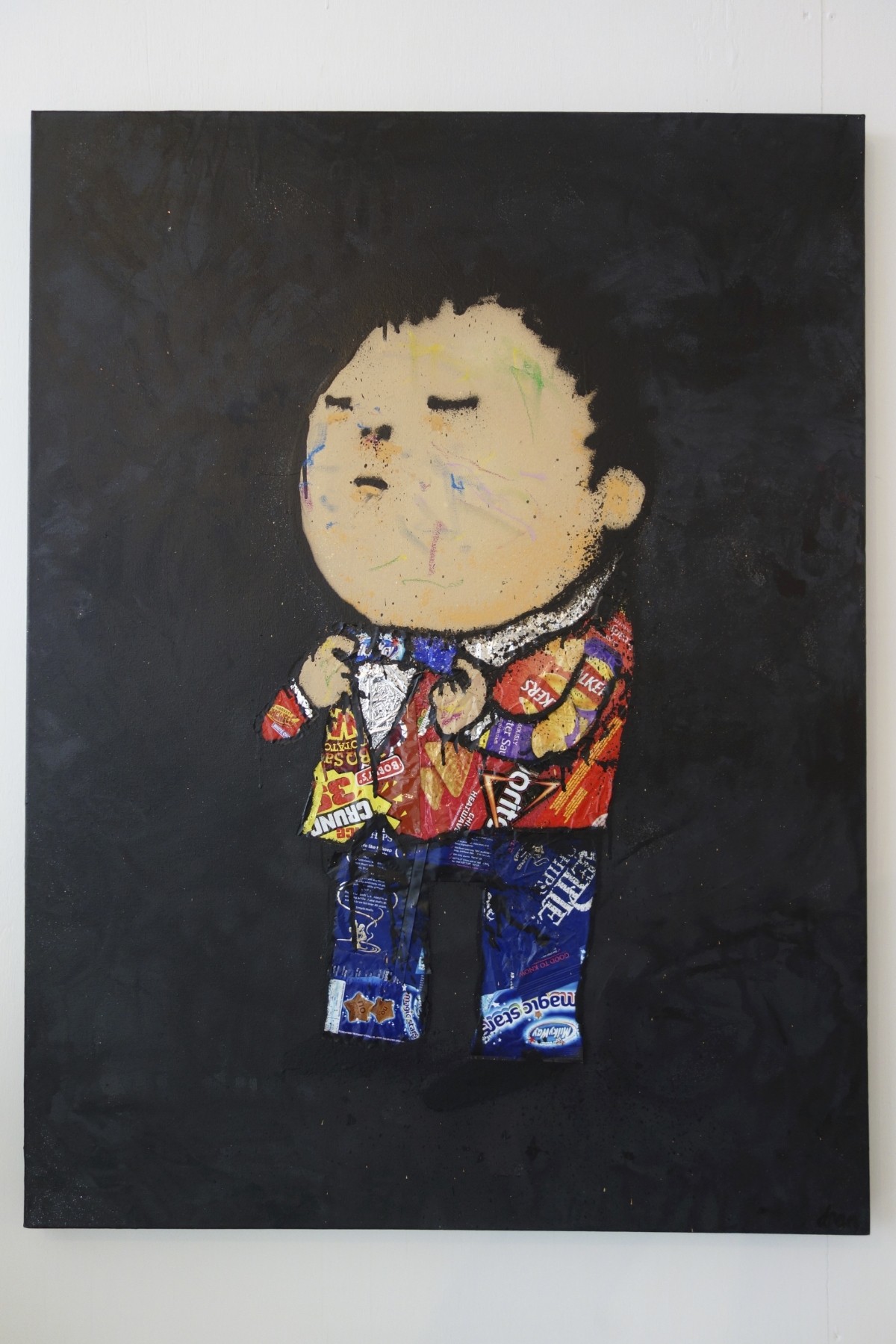 ‘Milky Way’. Mixed media on canvas. Visitors can make an offer for this work, which doesn’t need to be monetary. The artist will then choose which offer to accept.

Anyone attending Public Execution can make an offer for the above work on canvas, to be written on a slip of paper and placed in a box located nearby. The one considered most interesting or desirable by Dran will be accepted in exchange for the artwork. Bearing in mind the character of the artist, it seems unlikely that a mere financial offer would be successful in securing the piece.

This audience participation element is fun, as well as being a statement. The onus of being creative isn’t solely the responsibility of the artist. Rather, exhibition visitors are positively encouraged to use their imaginations (or discouraged from letting their imaginations go to waste).

AM decided its own offer for Milky Way would consist of open-ended queries, for future reference and reflection, regarding an emphatic interjection overheard on the bus journey to the show. Questions: Does the exclamation “Jesus Motherfucking Christ!” suggest the son of a god had an Oedipus complex? If so, could it be linked to some void resulting from his supposed virgin birth? Causation or mere coincidence? 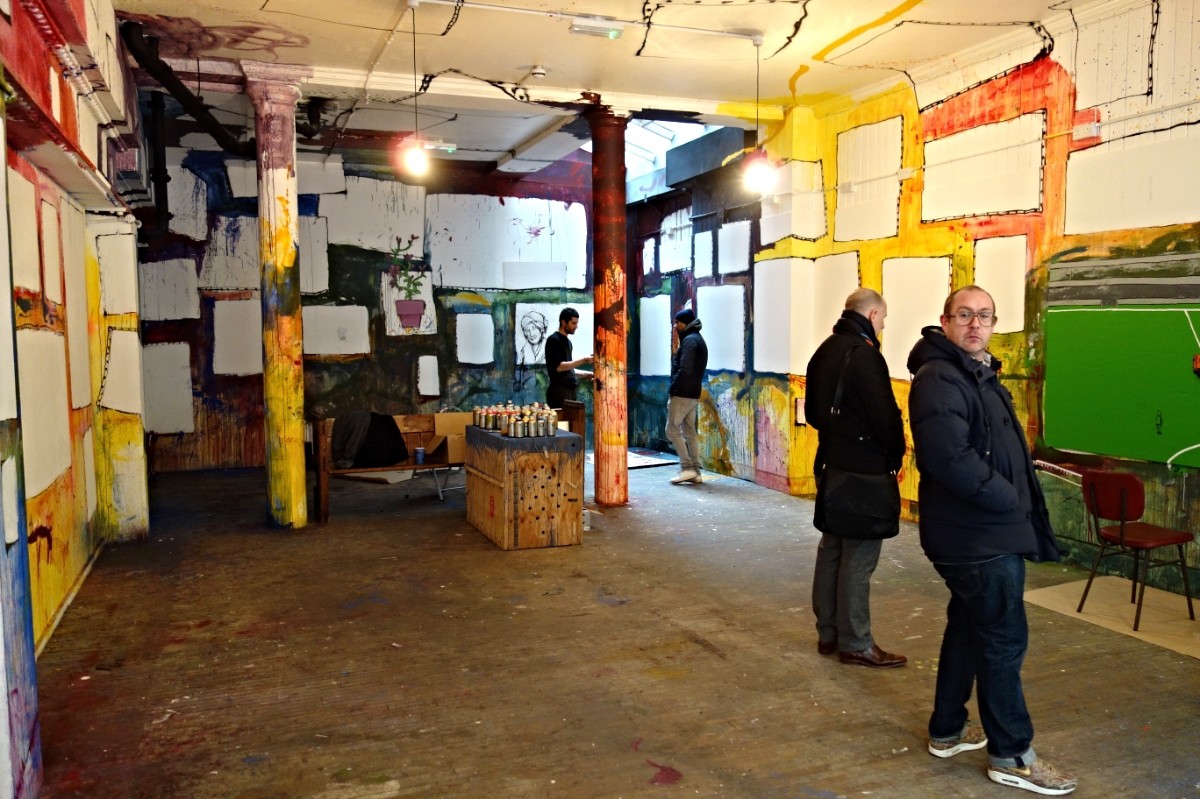 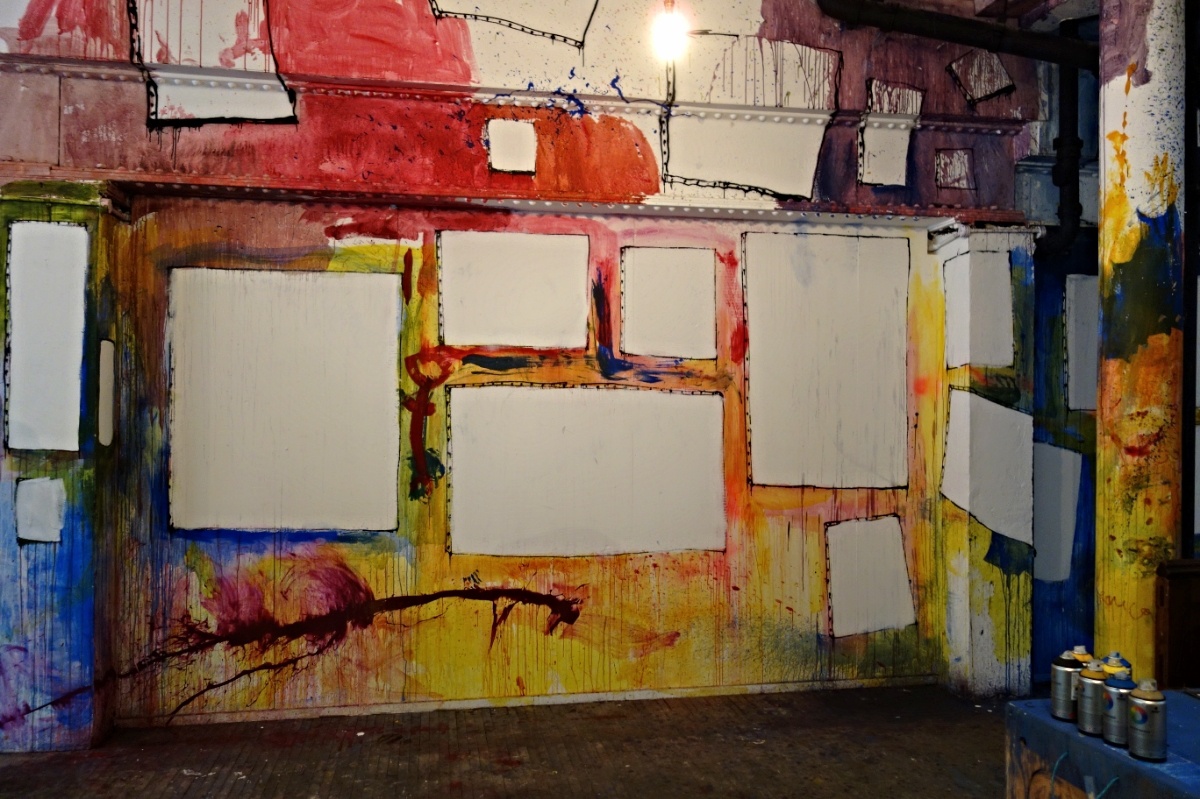 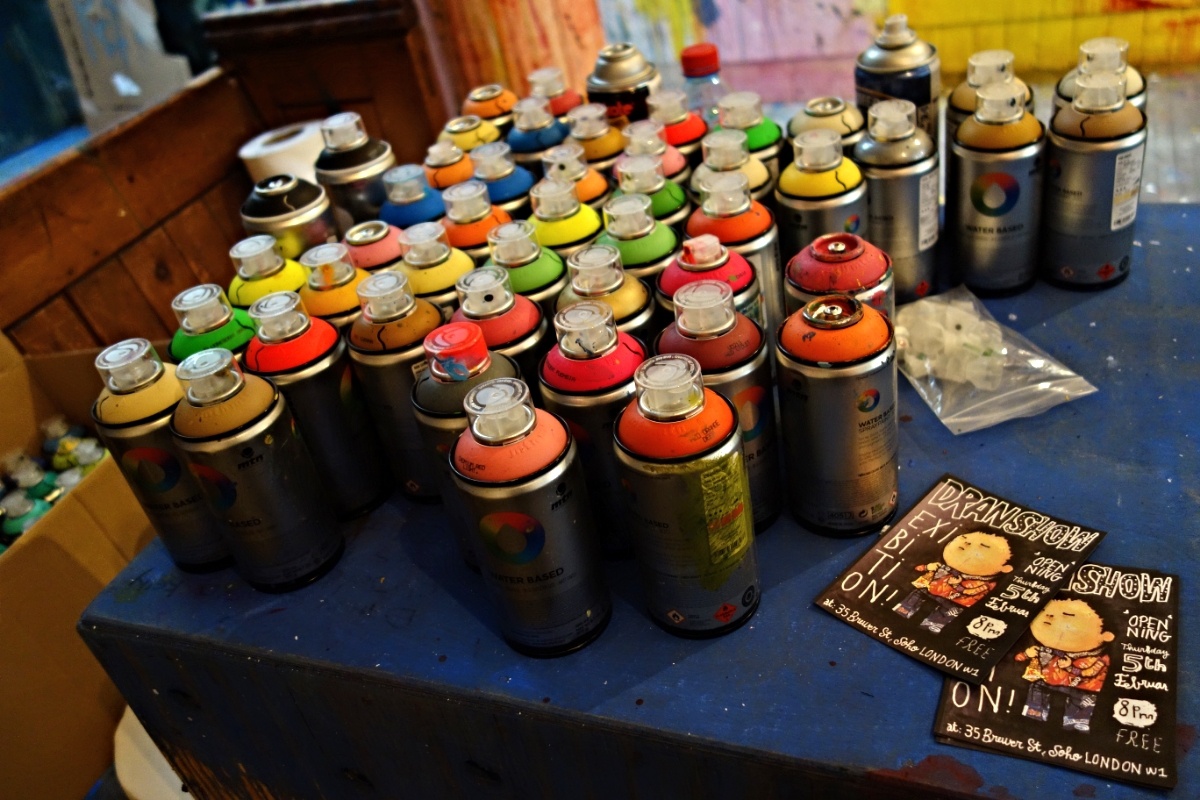 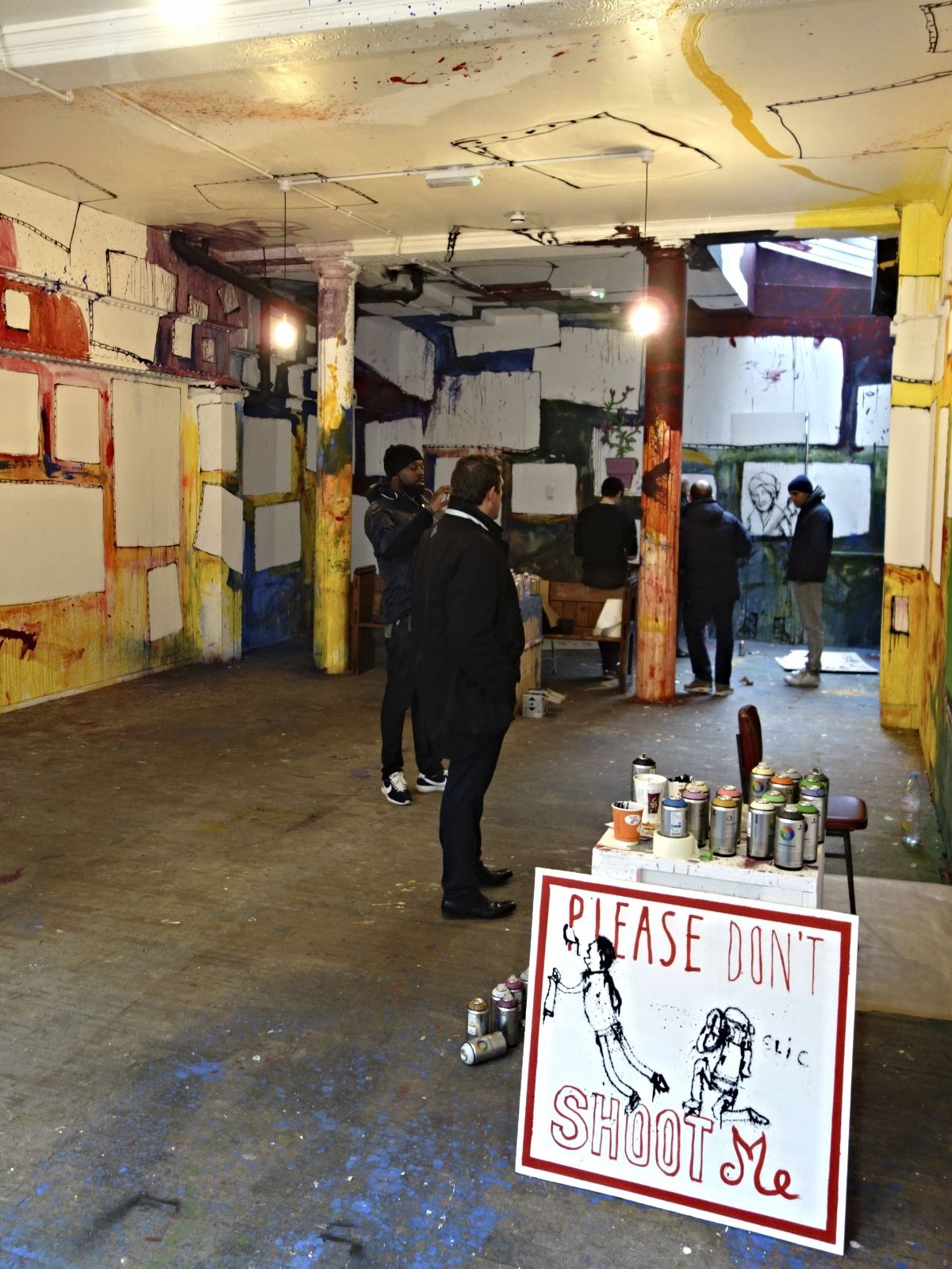 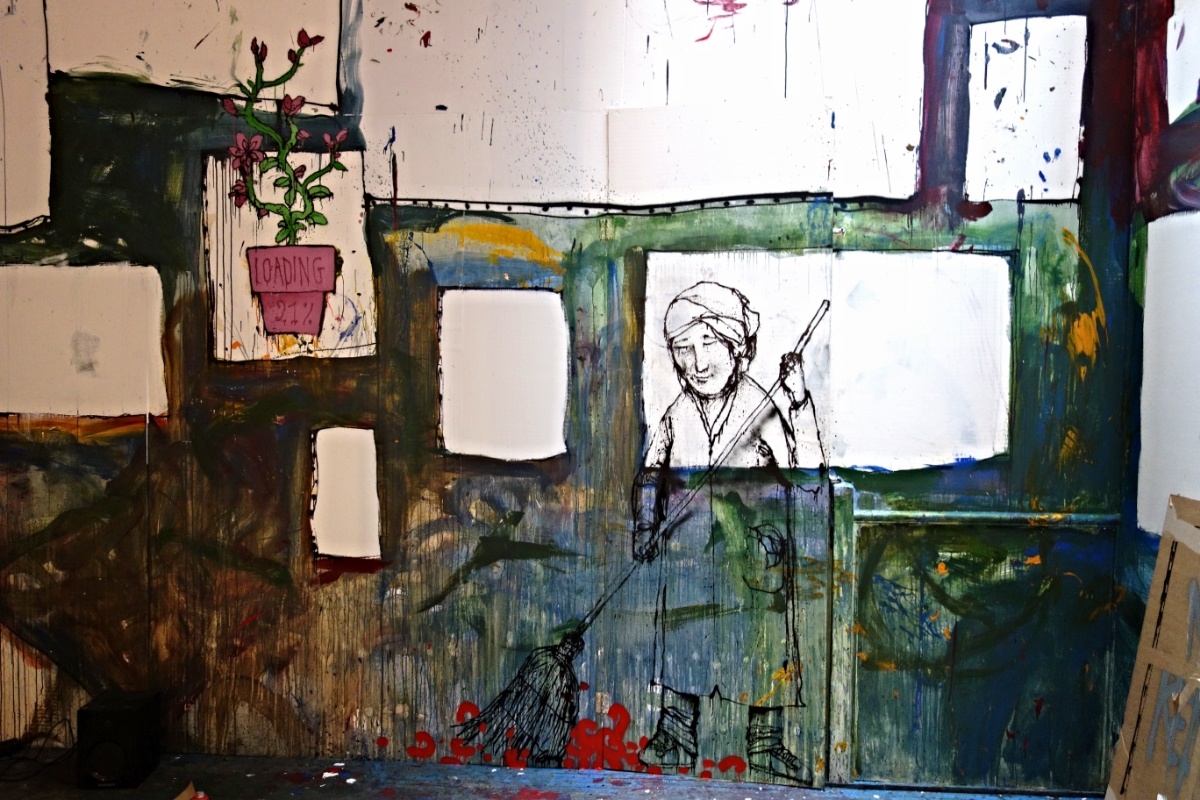 With the last brush stroke or spray from the can to take place immediately before the closing, Public Execution certainly isn’t the most convenient of shows for visitors. Unless they’re at the venue on Saturday evening just before the doors shut, even London-based Dran fans will be unable to see in person the exhibition in its fully-completed state.

However, what the show has offered were opportunities to witness Dran producing work in real time. This is comparable to visiting the studio of an artist while they’re busy painting, something the general public is rarely, if ever, given the chance to experience.

In an age where artists often seem to pander to the wishes and demands of their audiences and collectors, it’s also quite encouraging to find some still playing by their own rules, and even changing the rules along the way. Ultimately, they are the creatives who command the greatest respect — those who don’t succumb to being mere crowd-pleasers, and who choose to be the organ grinders rather than the performing monkeys. 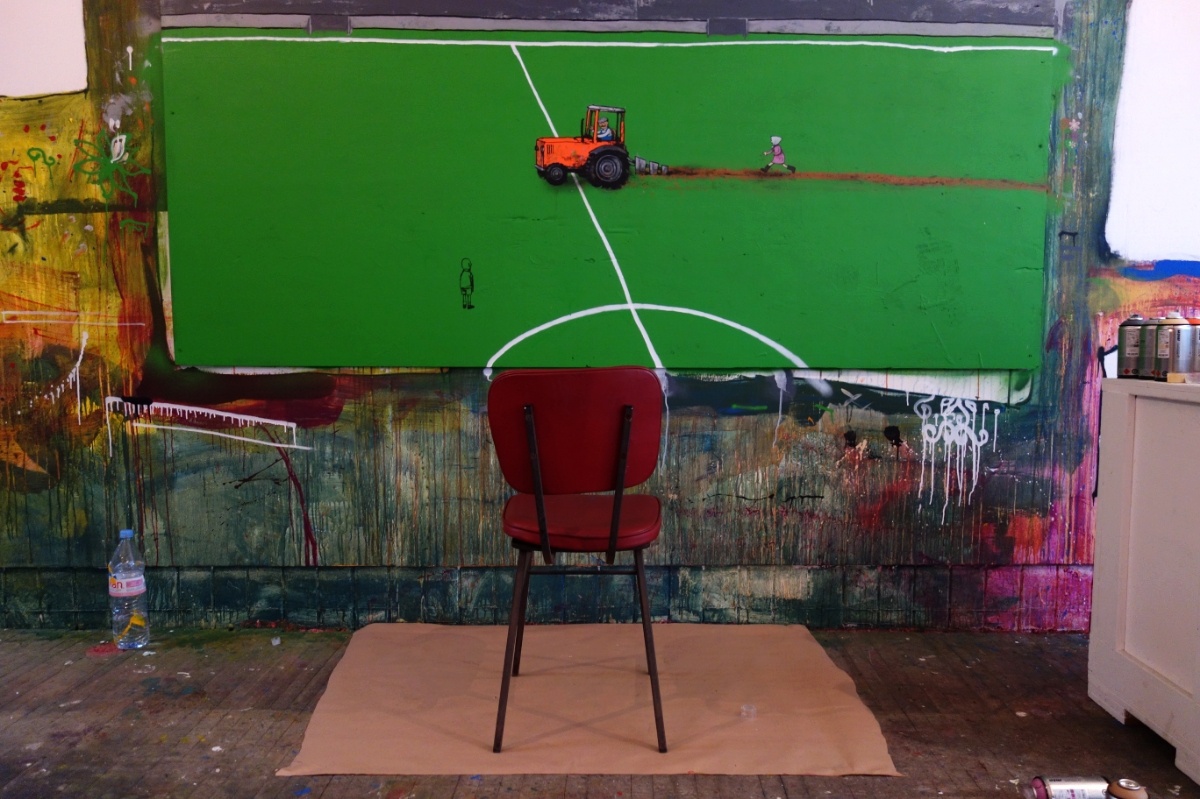 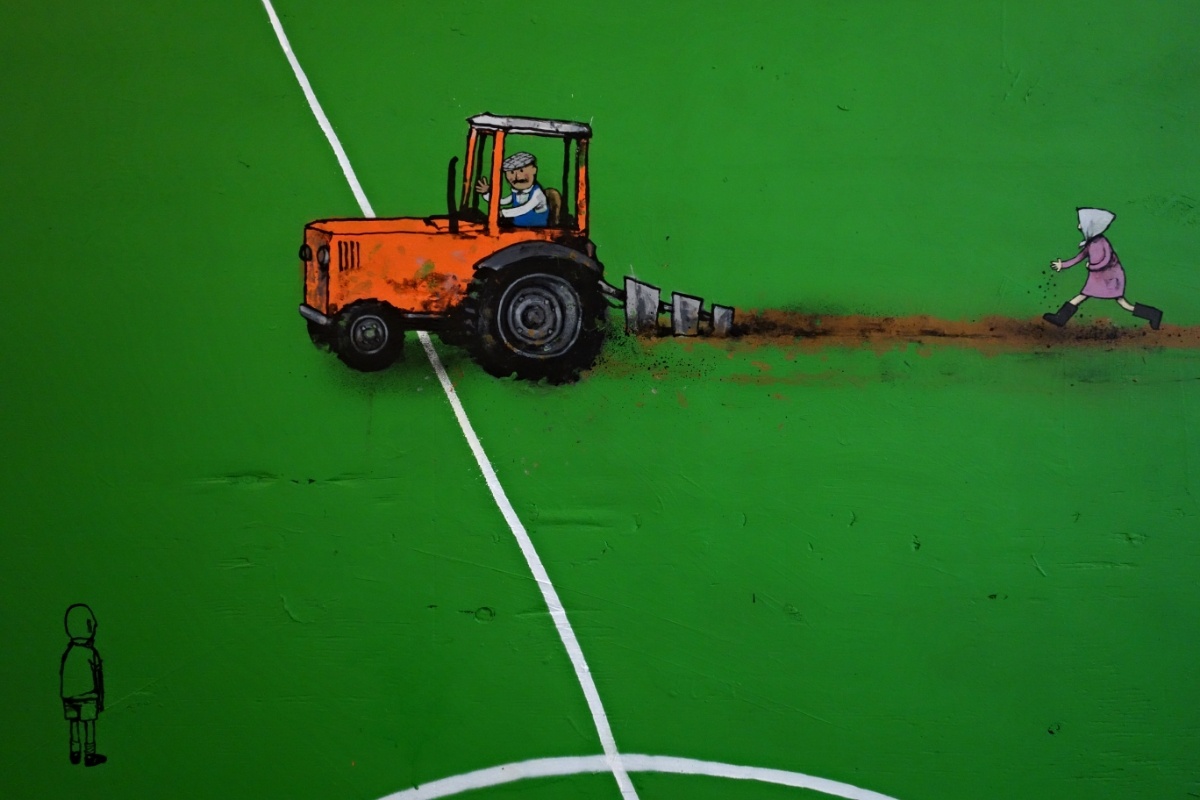 Our understanding is that Dran was given carte blanche by POW for this exhibition, free reign to do as he pleased. He’ll also decide upon the fate of the artwork produced during the show. Sell it, keep it, or destroy it. The choice is his, and apparently his alone. We look forward to seeing how it all ends. 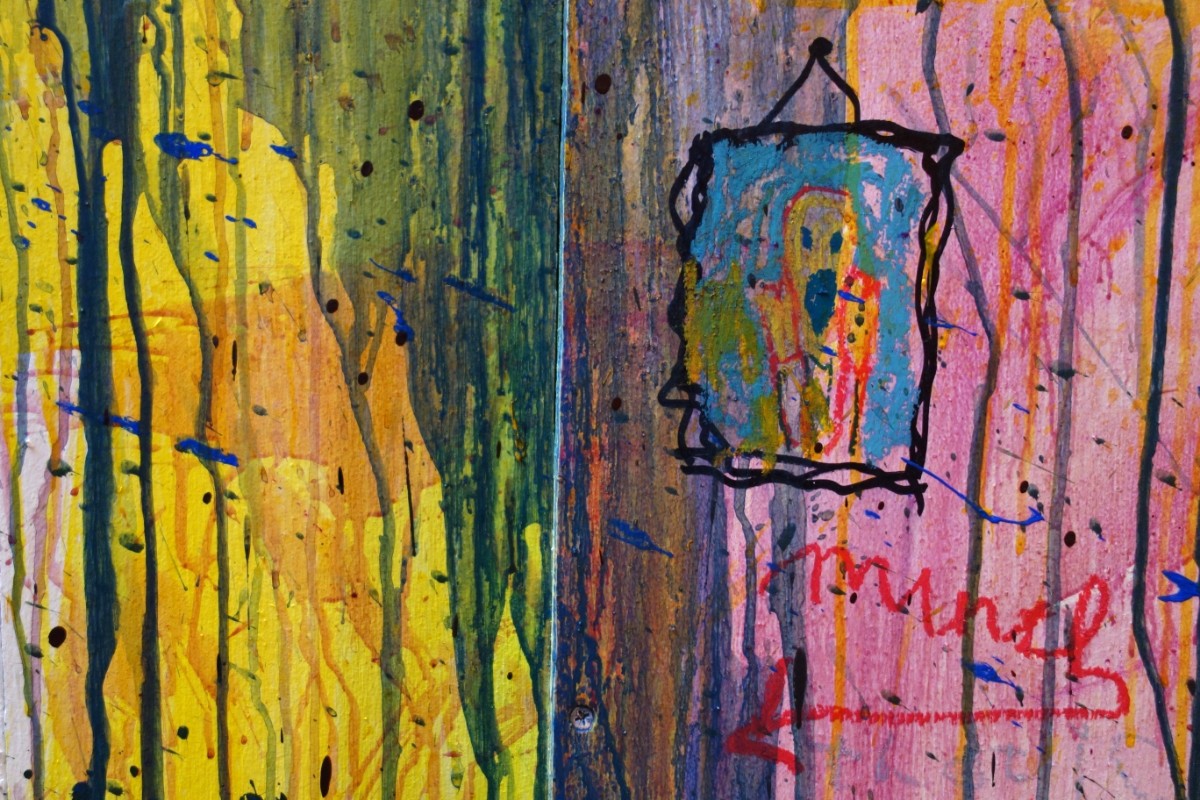 Small detail spotted on one wall.