After the exclusive press preview held on the 20th of August (covered), the 21st was day zero for Banksy’s newest and biggest show to date. From the early morning, locals started lining up for “locals only day,” the artist’s own initiative that offered 1,000 North Somerset people the chance to see and experience the it completely free – before its official opening. The evening (more on this later) of the same day was reserved for guests with invites that escalated into a huge party with music, live drummers and a huge firework that marked the official opening of Dismaland.

Experiencing the art show, or the “bemusement park,” along with hundreds or thousands of visitors brings a new light on to this immense project. Along with the visual aspect and the messages behind the works seen the day before, seeing more attendees brings a conceptual tone to the whole experience. The interaction between the park hosts and guests as well as guests and the park attraction, is what actually brings to life the entire show.

This was especially evident with the local crowd, that was mostly consisting of families and curious individuals that wanted to see this “new thing.” There were mothers with babies being confused with the explicit language of the Punch & Judy show, or entire families watching questionable content in the outdoors cinema. Elderly ladies were impressed by Scott Hove’s cake-based art in the Big Top Freak Show, as much as they were unimpressed with Banksy’s Mediterranean Boat Ride. Watching kids struggling to find room and play in Paul Insect‘s over packed sandpit or getting frustrated on the impossible Mini Gulf course and getting their parents to find the balls that entered the tubes and never came out was part of what made the exhibition come alive. This was also evident when you observe entire families being dizzy or just confused after taking The Astronauts Caravan ride, or enjoying the old fashioned merry go round ride, seemingly oblivious to one of the pretty horses being butchered and put into lasagna in between them (perhaps in reference a scandal in the UK in 2013). Both simple, effective and ridiculous, it’s a great example of the spirit of Dismaland.

Being fans of arcades and of testing their luck, many locals tried the games set up outside, but most left empty handed. The sight of excited children trying to win a cardboard chip by hooking a rubber duck under an oil covered pelican, or shooting a spray can in order to win a fake gold chain with weed, dollar signs, handcuffs, etc, made the points stated in the park description that much stronger and evident. Many took a break from confusing activities and just enjoyed the unusual art in the gallery and were especially amazed with Jimmy Cauty mind blowing installation. At the end of the day, they walked out through the gift shop with David Shrigley’s I’m an Imbecile balloons, paper chips, bling, or a souvenir photo when they are placed between the paparazzi taking shots of a dying Cinderella.

Starting the 22nd of August, Dismaland will be opened to the general public for the next five weeks and all the info about tickets and special events can be found on Dismaland.co.uk. 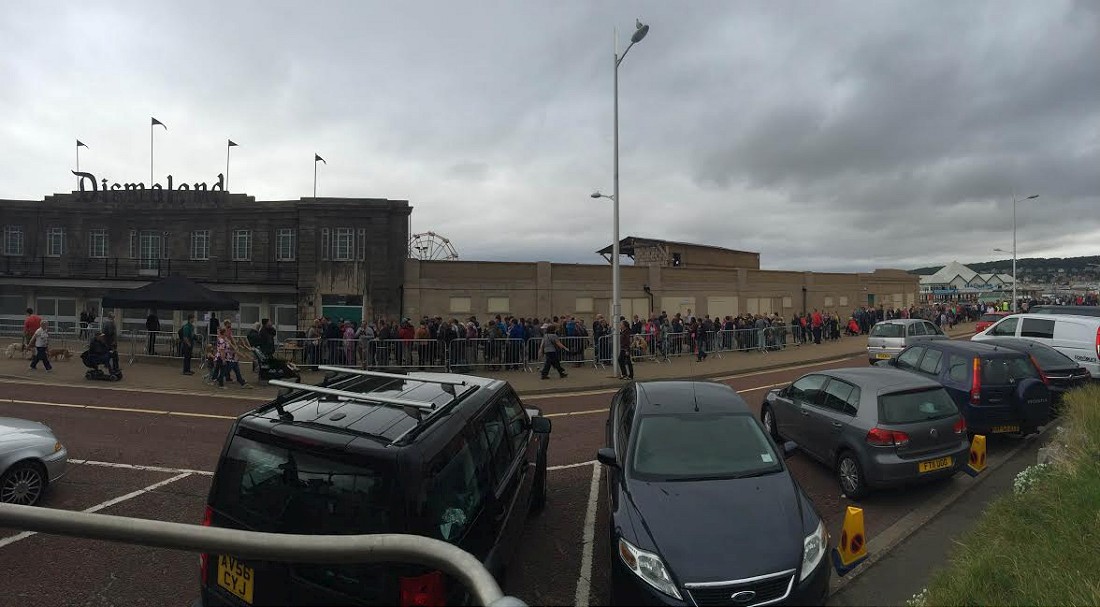 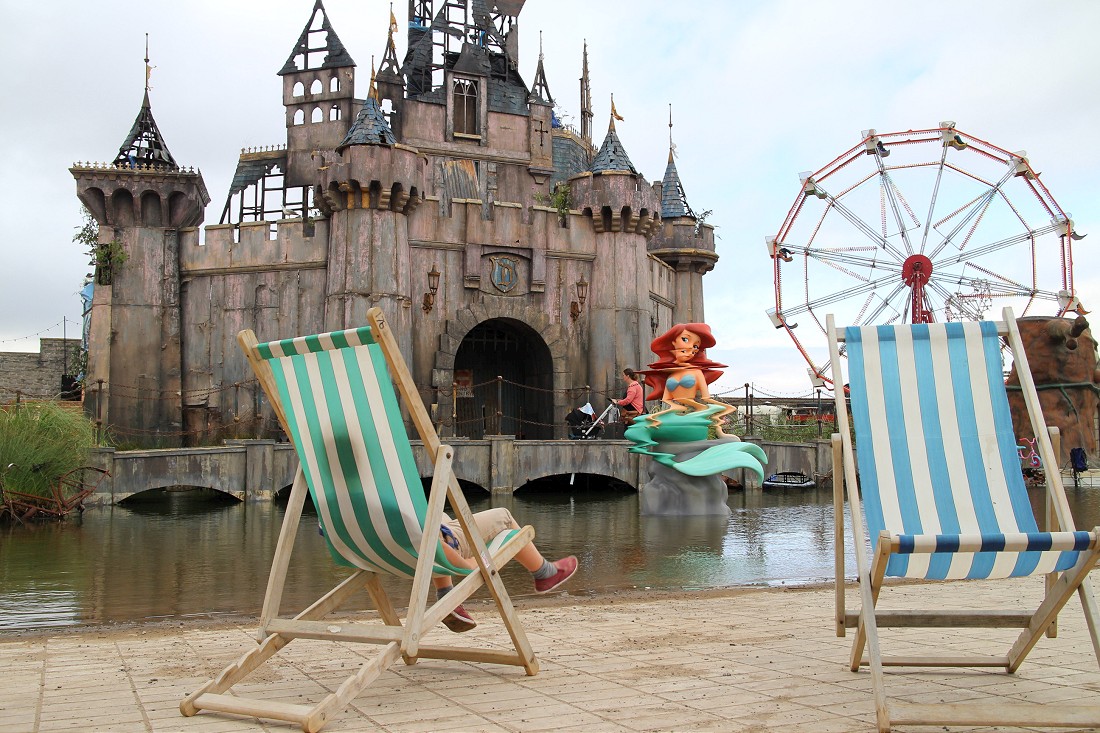 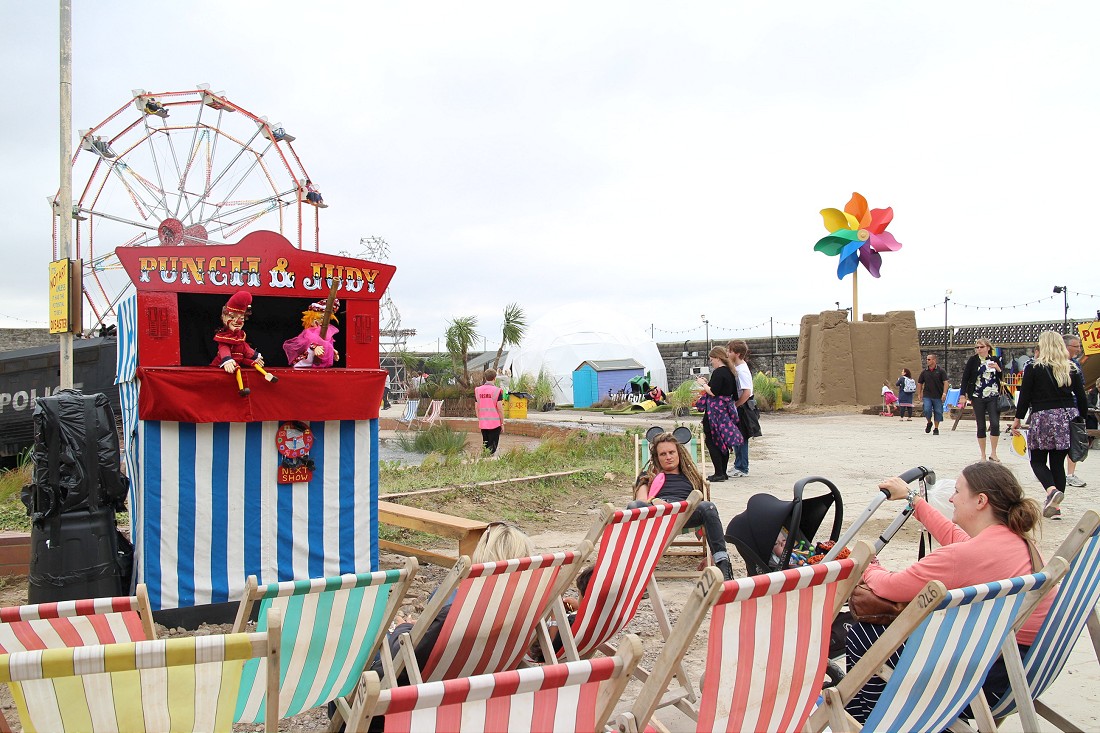 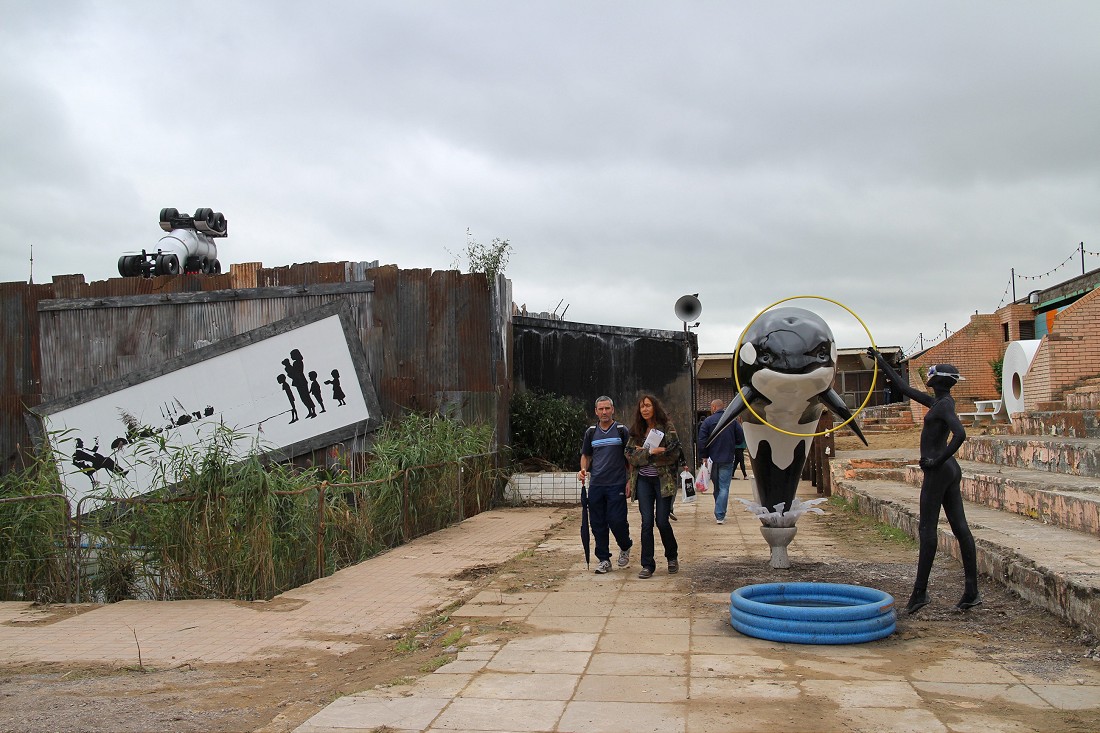 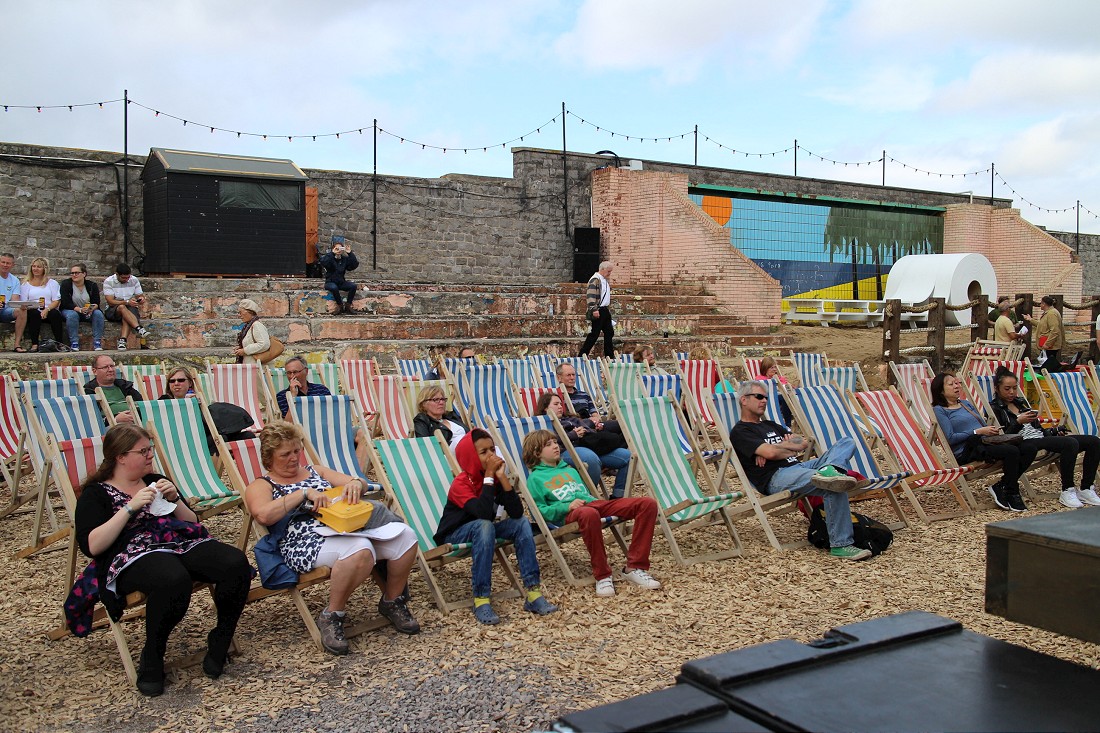 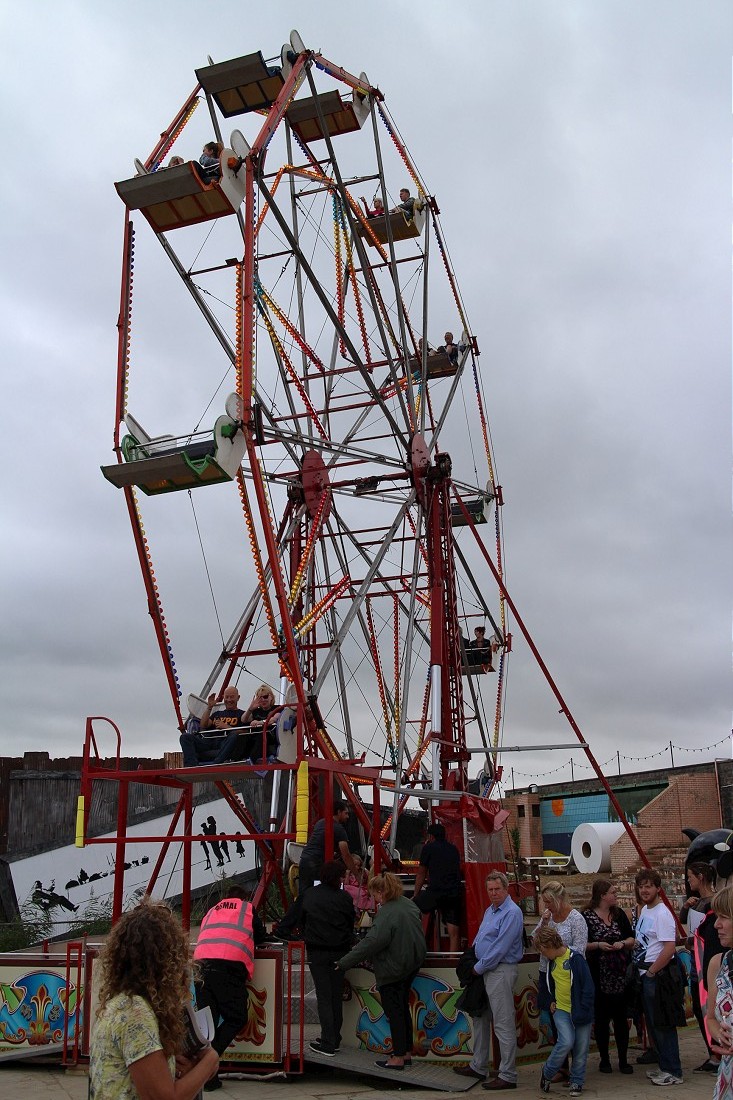 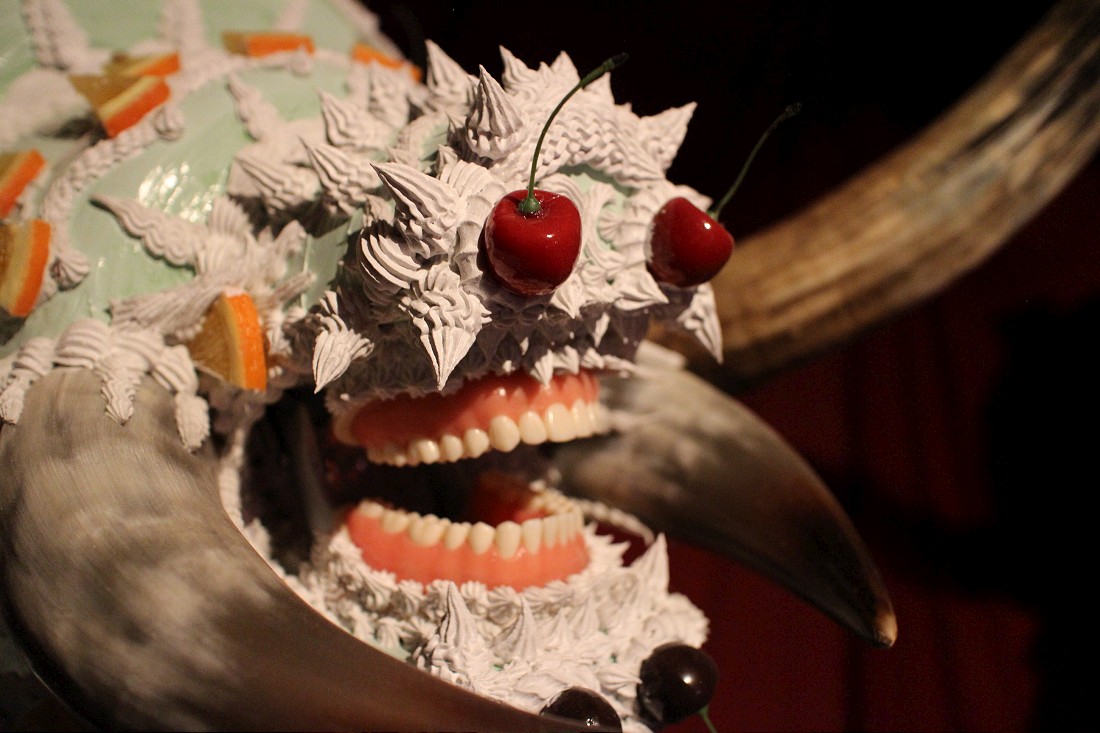 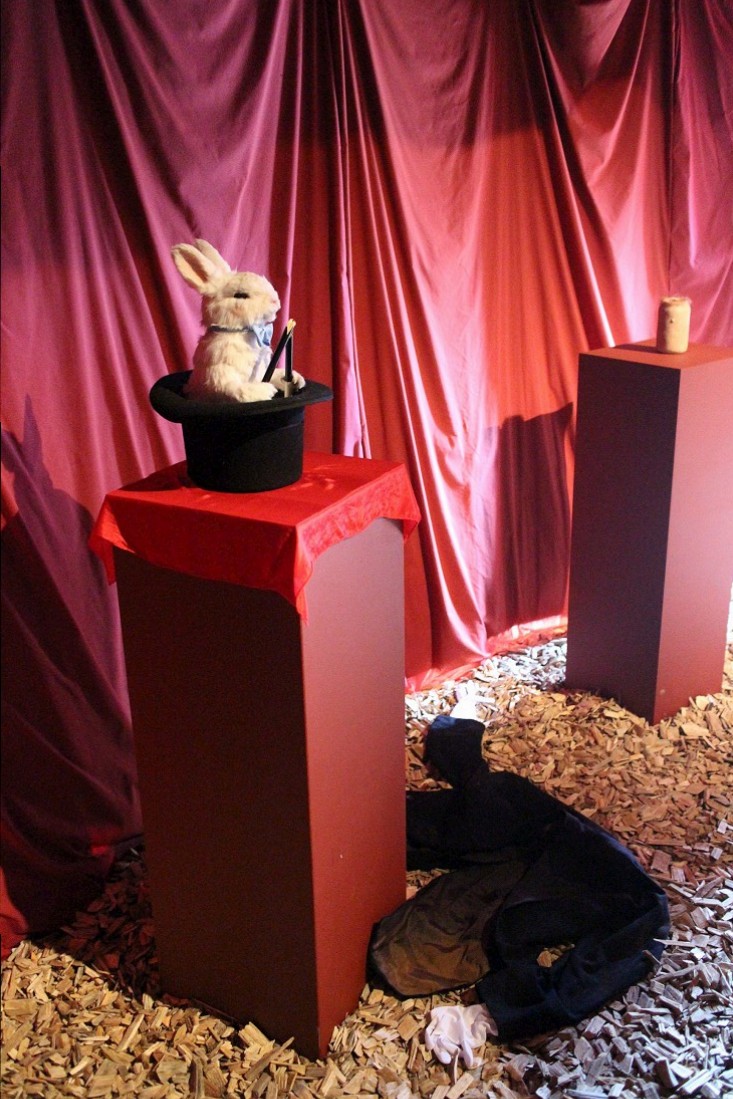