After days of preparation, the central event of each year’s Nuart Festival was held on Saturday, the 10th of September. On view was a group show by participating artists titled Post-Street Art was in the tunnels of Tou Scene. Like in the past, the space of the former brewery was divided between the artists, some sharing the rooms with collaborative installations and some showing works by themselves. Including contributions by 10 artists, most of the pieces were created exclusively for this event and won’t be exhibited anywhere else.

Eron created his work in the corner of the entry room, painting a pelican struggling with the pollution coming out of a rusty barrel. Addressing the environmental issue of the oil industry in the Norwegian oil capital is certainly an effective way to welcome visitors. The first tunnel was shared between stencil artists Evol and Add Fuel. In his signature style, Evol created a set of small buildings on concrete blocks created especially for his installation, while Add Fuel added some of his tile-inspired blue patterns around it and even on one of the buildings (seen above).

Fintan Magee painted a wallpaper-like still life in the back of his room that was completed with a dining table, chairs and light. Among flowers, fruit and vegetables, several empty cans were cleverly incorporated in the rich imagery as a reminder of the issue of waste disposal. Next to him, SpY once again showed his ability to take a fresh and different approach on presenting and creating work. He blocked the room off with large bricks, allowing attendees of the exhibition to only have a peek inside. When they did this, they only saw an “Image not available” spraypainted on the wall. It was the people trying hard to see the work inside that actually completed this original installation.

The next room included two photoshopped billboard posters by KennardPhillipps that were also placed in town. One featured unsettling titles from the British press about the refugees crisis, hanging on a barbed wire around a bombed town and one showed sort of a stock exchange monster. Next to this politically charged work, Nipper set up a little classroom along where visitors could create their own work and exhibit it along with his treasure packs. Robert Montgomery put on display one of his poems through a light installation that was glowing in an otherwise pitch dark room.

In the adjacent room, Jaune and Jeff Gillette were featured with work that referenced rubbish and/or slums. Attendees could work through sort of a minimized landfill where stenciled rubbish men were having their fun, and end up in front of a falling apart Dismayland gate. Finally, in the last room, Henrik Uldalen painted one of his signature haunting portraits which was reflecting in the glass that was shattered all over the floor completing the unsettling feel of his work. 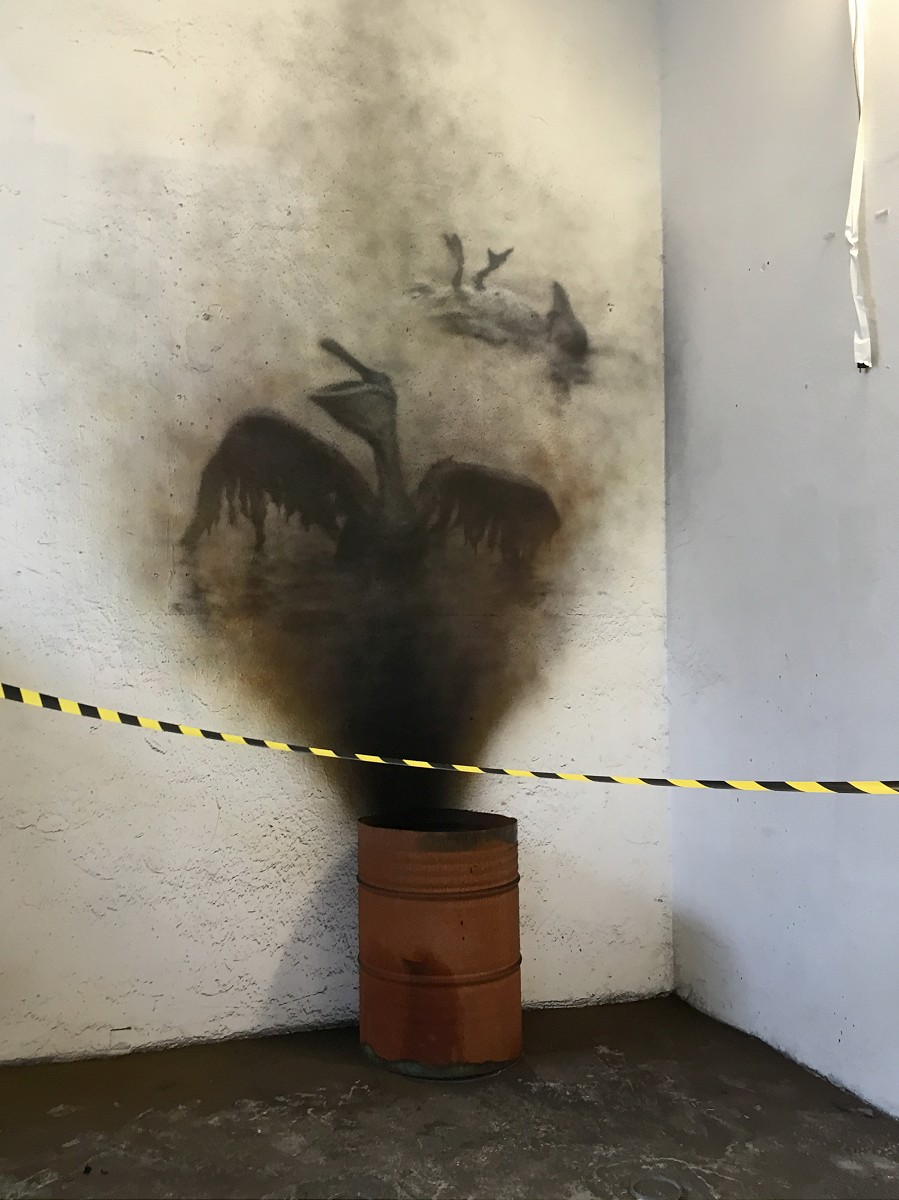 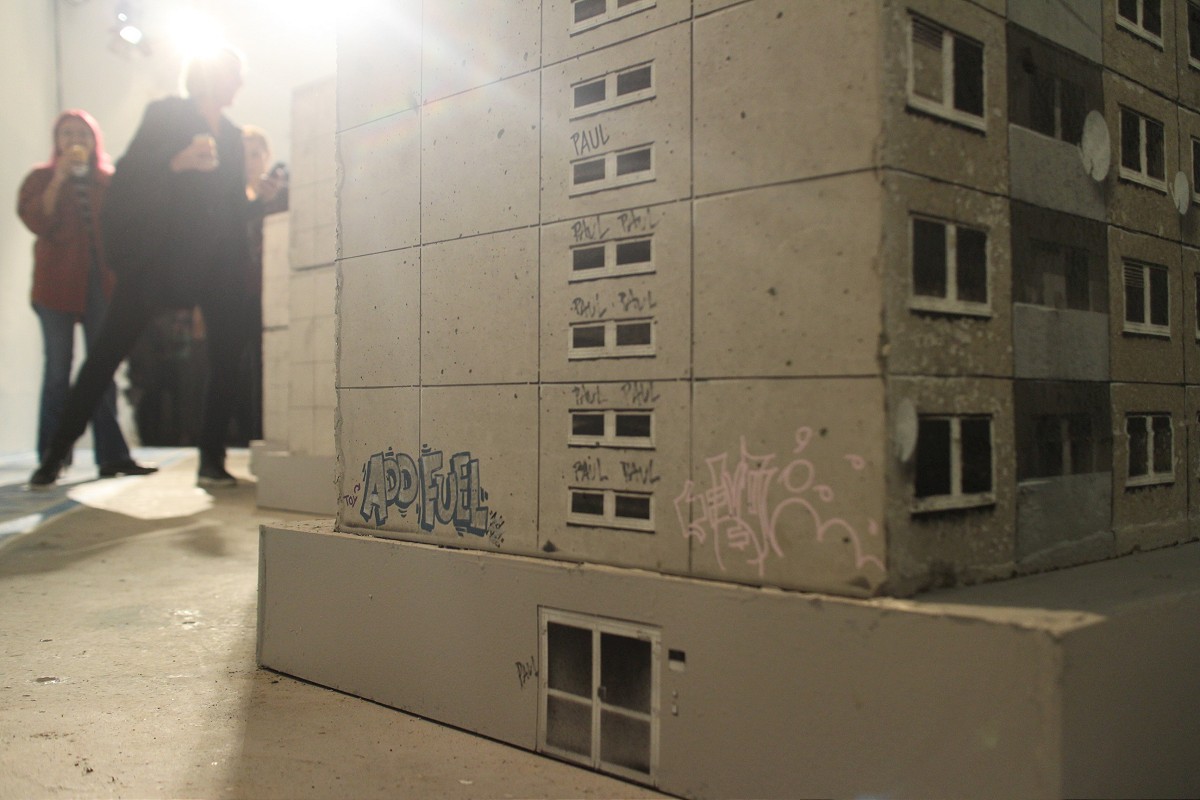 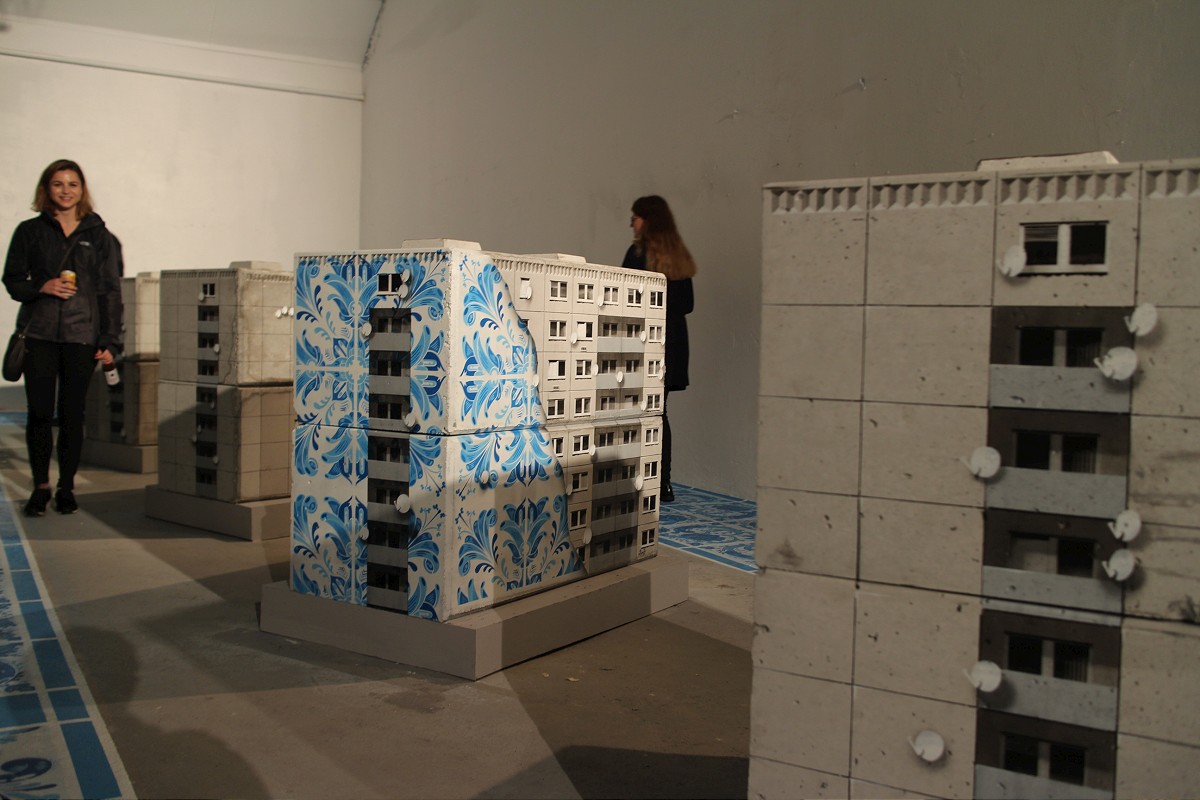 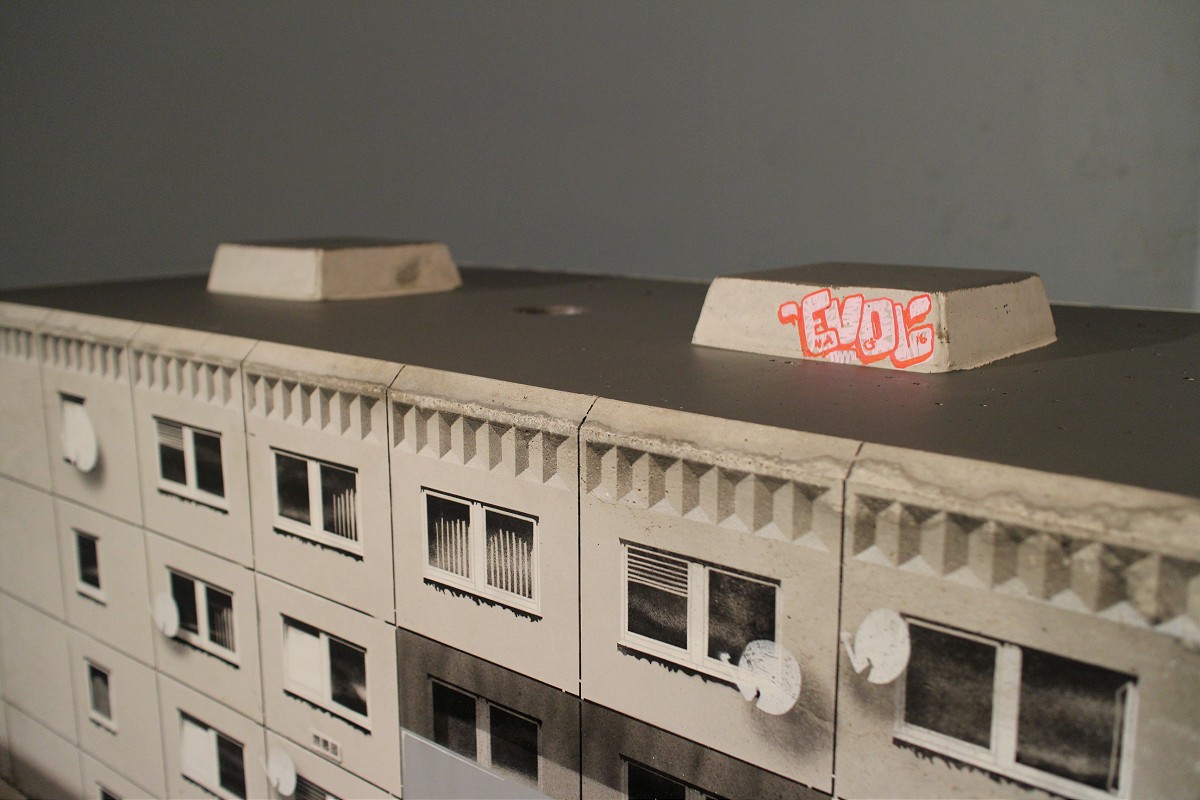 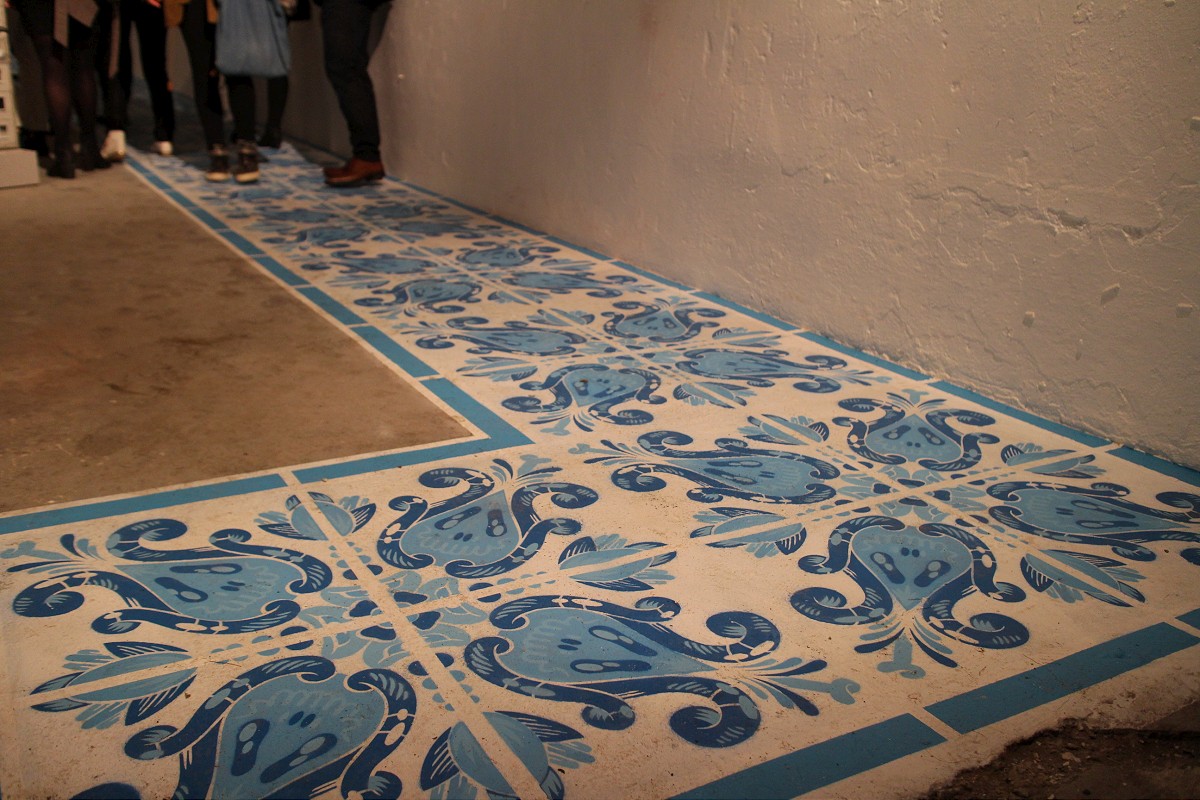 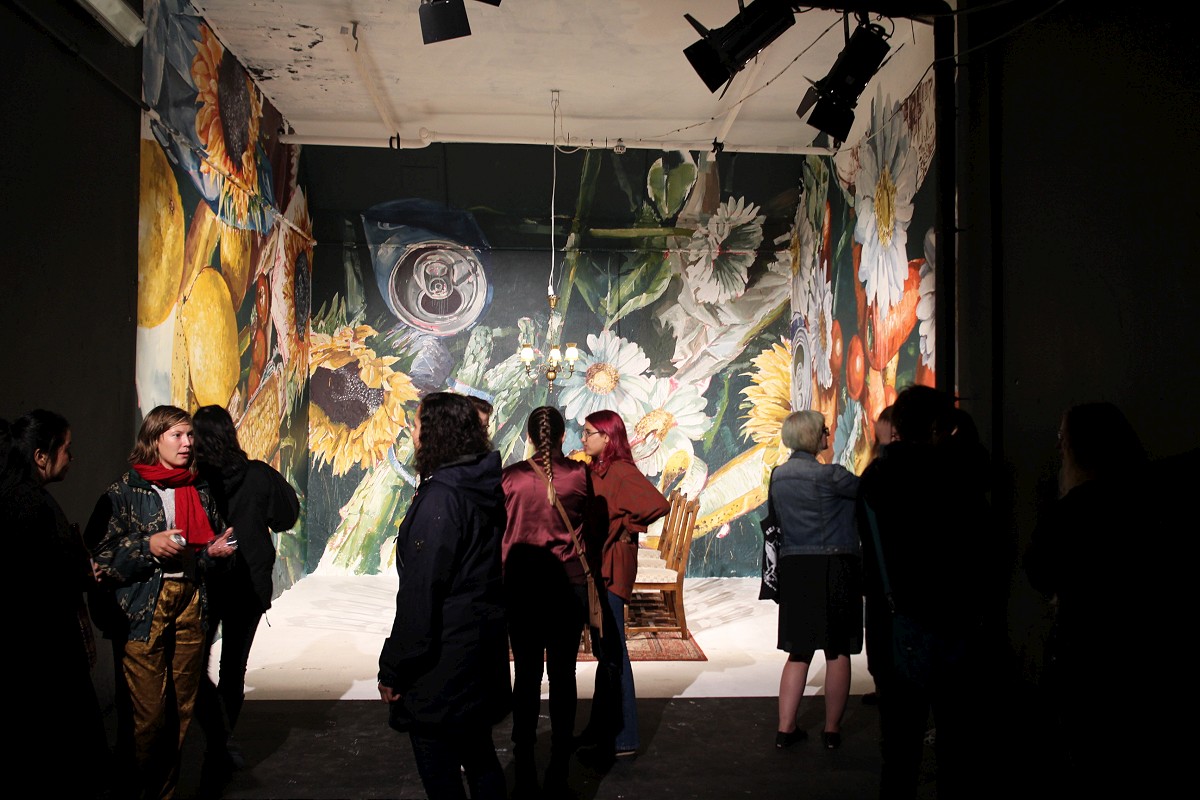 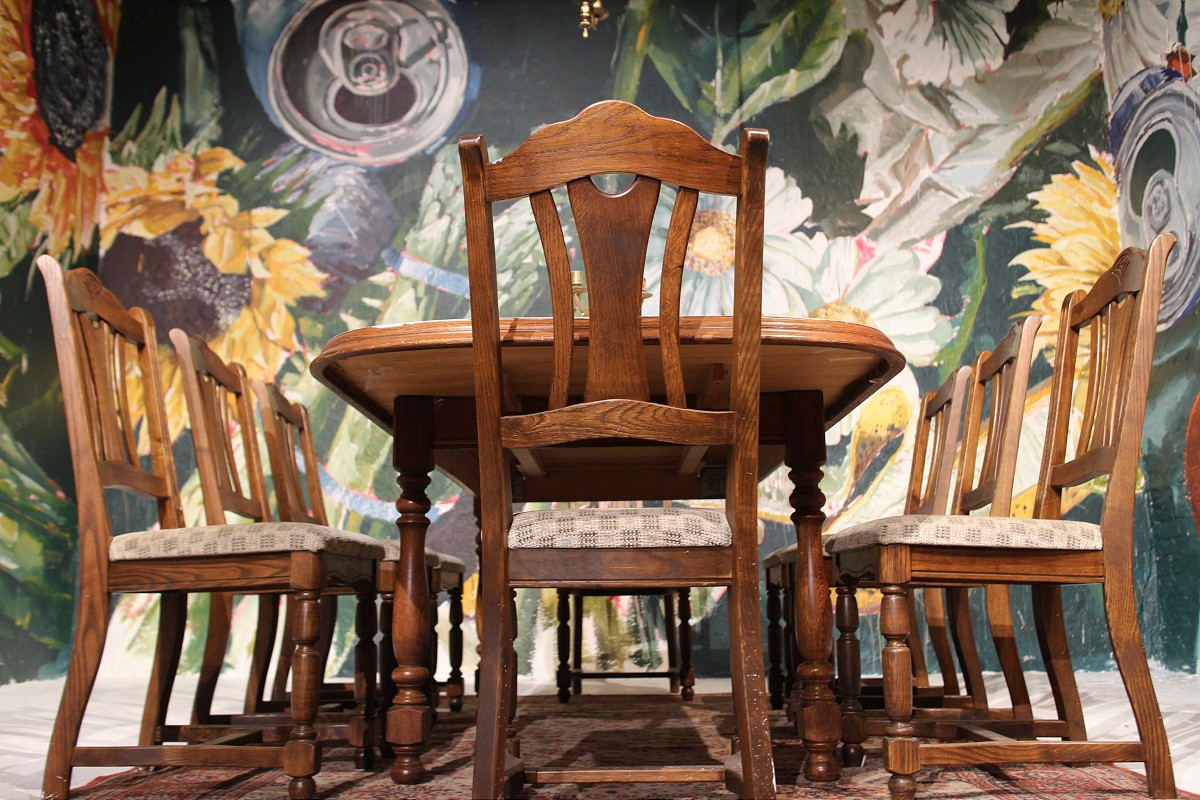 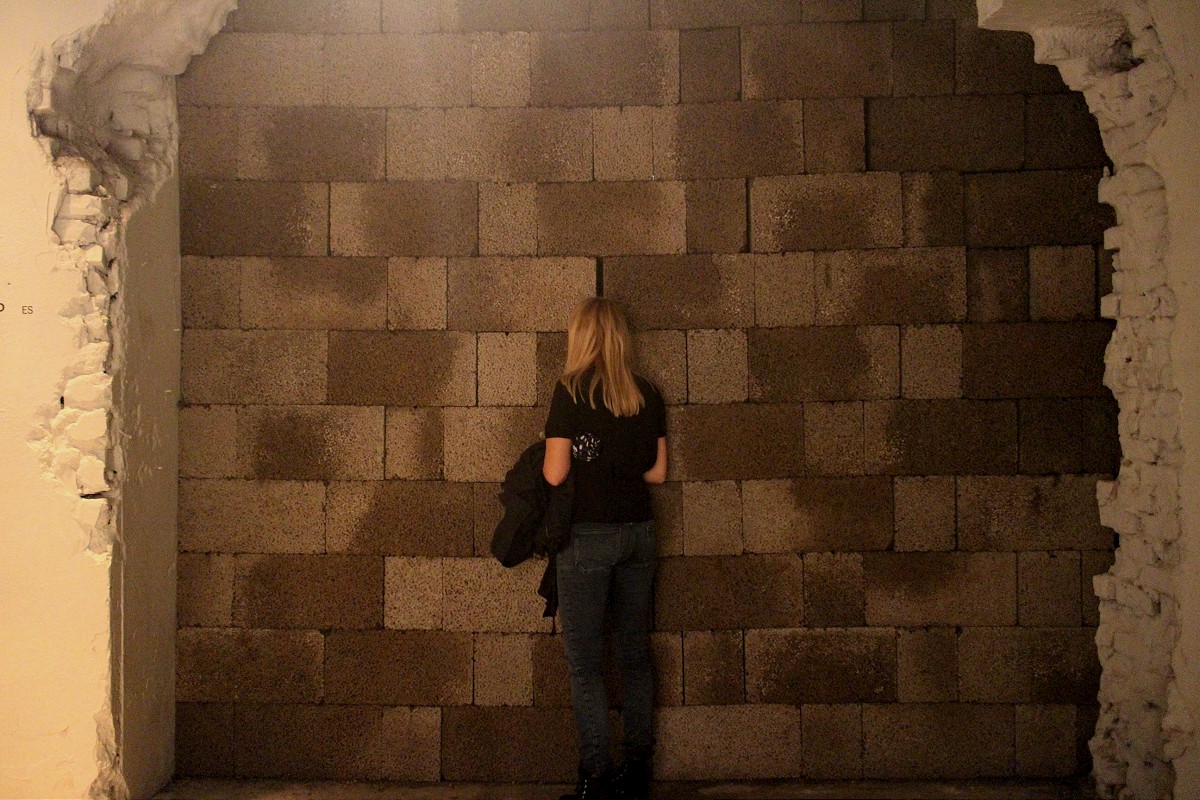