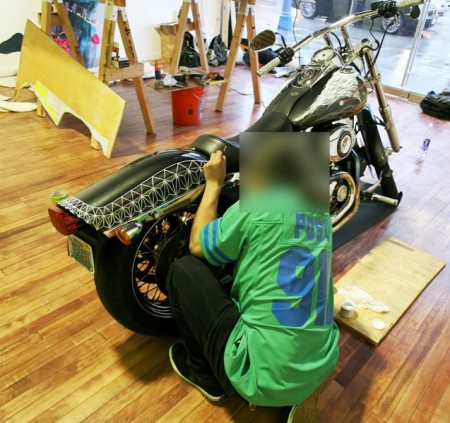 Tonight marks the opening of New Image Art’s anniversary show “15 Years of New Image Art” (previewed). AM swung by the gallery yesterday to check out the progress of the installation. While we were there, Judith Supine was putting on the finishing touches to his 18’x16′ kinetic sculpture and Neck Face was customizing a motorcycle in his uniquely raw style. In you’re in Los Angeles, don’t miss this milestone event!

The event will also feature a show within a show, “MOVE” curated by Rich Jacobs, with a mock-up of the 10’x10′ space where gallery founder and director Marsea Goldberg first launched in 1994. Next door, in the main gallery space, Cleon Peterson is exhibiting his latest show “The Occupation” which features his uber-violent paintings symbolizing the struggles of power and submission in contemporary society.

Entertainment will be provided by indie rock group No Age and DJ Alf Alpha will be on the ones and twos the rest of the night. It’s going to be a hell of a party!

Check out the additional preview images and setup pictures after the jump.