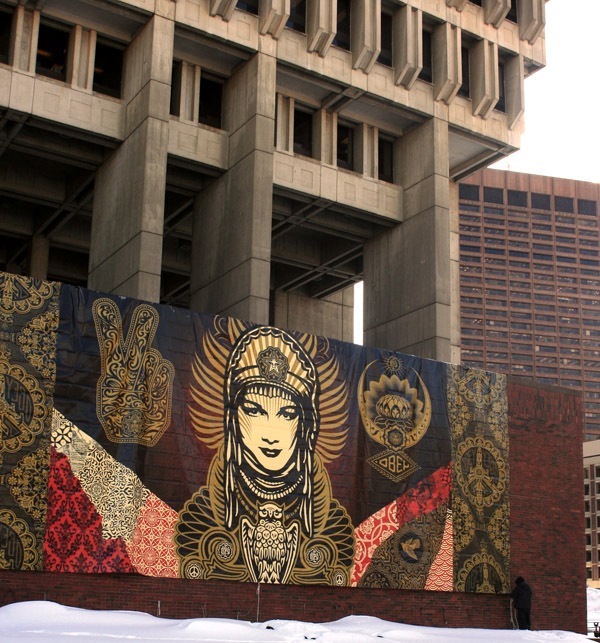 It seems that the Boston Police Department were not at all impressed by Shepard Fairey’s status as Presidential portraiture or his 20-year retrospective at Beantown’s Institute of Contemporary Art. According to The Boston Globe and Huffington Post, Fairey was arrested last night around 9:15pm as he tried to enter the ICA, where he was scheduled to DJ the museum’s sold-out Experiment NightÂ dance-party (with tickets going upwardsÂ $500 on Craigslist).

Police Officer James Kenneally stated the department had Jan. 24 warrants alleging the Los Angeles artist tagged property with graffiti. Wait… warrants that have been outstanding since Jan 24th? So where were the police thisÂ Wednesday,Â when Shepard and Boston Mayor Thomas M. Menino unveiled a stunning 20 x 50 ft Peace Goddess banner on the north wall of city hall? While Mr. Fairey is no stranger to being arrested, having had the experience at least aÂ 14 times over his street art career. Even so, it can’t be pleasurable -Â AM hopes Shepard was released quickly and without incident.