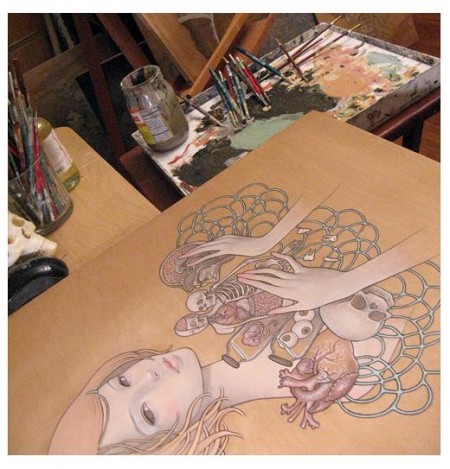 As we near this year’s Baby Tattooville (BT) opening this Friday, there’s an air of excitement at the AM office which we can’t quite put into words (pictures maybe…) This buzz is generated from the anticipation that has been building since we attended last year’s BT (Check out our 2008 coverage).

Only 5 more days till we bring you our full coverage from BT 09 and to kick off the countdown, we have a special preview of Audrey Kawasaki’s painting for Baby Tattooville. Never failing to mesmerize, Audrey’s enchanting style seduces the audience with her characters’ hypnotic gazes.Â TheÂ lucky participants ofÂ BT willÂ able to see her work (yes she will be drawing!), whichÂ alone is worth the price of admission. More about Baby Tattooville after the jump.

The goal is to keep a personal environment with aÂ 4-to-1 guest to artist ratio by allowing only 45 spots available to the public. This ratio doesn’tÂ factor inÂ the numerous alumni coming back and hanging out for the weekend. Basically, it’s a behind-the-scenes look at your favorite artists. At one point in the night last year, it seemed like there were more artists than guests! Oh, did we mention that you also walk away withÂ a specialÂ treasure bag full of unique artwork, toys, prints and more, which are exclusive only to attendees? Luckily for you, we’ll be attending to give you a first-hand look the whole weekend!