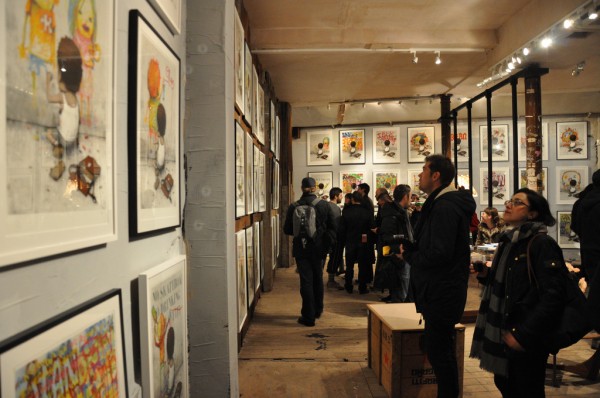 It’s been a busy end to the year for French artist Dran with not one but two shows held in London in association with the print house, Pictures On Walls. My Everyday Life, a show of original paintings and illustrations, along with a fine installation, opened as part of POW’s end of year extravaganza, Marks and Stencils (née Santa’s Ghetto), in London’s Soho on the 26th November and was followed a week later by the opening of the I Have Chalks print show at POW’s showroom/HQ in East London.

Although nominally a print show, the unique selling point of I Have Chalks was the very heavy customization which the artist applied to the 100 prints of the edition. A ‘base’ 7-colour screen print of a kid sitting in front of a blank wall, armed with a satchel of chalks, allowed Dran to fill each print with a unique hand drawn image resulting in a show which takes the commonly accepted concept of hand finished prints (often a flimsy excuse to charge a substantial amount extra for what often amounts to little more than a few half-hearted paint splashes), and run, giggling, over the horizon with it.

Read on for more words, pictures, and a video from Butterfly after the jump.

The showroom walls were a riot of primary colours as sixty odd prints from the edition of 100 were hung in neat rows across the two main walls of the space to create a near overwhelming first impression (the remaining prints from the edition were kept back for overseas/online buyers). Bright primary colouration and the deliberate childlike rendering lead to some overheard comments that the work was infantile and even a little immature by folk who had clearly missed the point, and by some significant margin. Dran has used the medium of a kid armed with chalk and crayons to project the emotions and desires of his subject (and himself, one presumes) onto the walls so that, beneath the day-glo colouration, lay bold expressions of grief, joy, hope, sadness, longing and anger, along with plenty of playful rebellion. It’s not all angst and worries as there are also nods to other artists (notably his compatriot, Invader) and POW themselves, along with a fair few jokey pieces, although these are perhaps less successful than those in which Dran’s emotions are writ large. 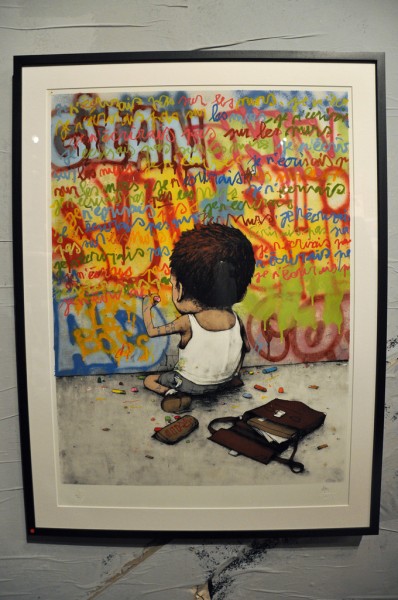 Dran has a sharp eye and a keen hand when it comes to purveying the knowing, self-referential, post-modern graffiti style often seen in the work of artists such as Banksy, Os Gemeos and Barry McGee and, as such, many of the prints make wry commentary on Dran’s own life as a writer (as a current member of the talented Da Mental Vaporz and with a history of painting on walls going back to his teenage years). This all leads to revealing an intriguing glimpse of the conflicts which exist between the vandal and the slightly more socially accepted illustrator/artist. Such pieces, in which the kid is seen scrawling and drawing across tagged and graffiti’d walls, were among the most playful and humorous on show with highlights being the Bart Simpson-esque repeated scrawling of phrases such as ‘I will not write on walls’, the outline of a chameleon, or a framed landscape, all of which were painted over heavily vandalized, and vibrantly colourful, surfaces (detailed views of each piece in the video above).

The focus required to sit down and fill the hundred blank walls of the prints has brought out the very best in Dran and, for this viewer, the end result is a a considerably stronger show than the rather mixed body of work exhibited at the ‘Marks and Stencils’ space. ‘I Have Chalks’ stands as a considerable testament to the impressive imagination and serious technical skills of an artist having a lot of fun with a concept and, for this viewer, the end result was one of the most rewarding, and outright fun, shows to have graced London in quite some time.

If nothing else Dran offers abundant proof that a childhood reading comics and writing on walls can be much more of help than the hindrance which some might have you believe it should be.

‘I Have Chalks’ runs until the 23rd December.

Words and pictures by Mike Stafford.
Video courtesy of Butterfly.