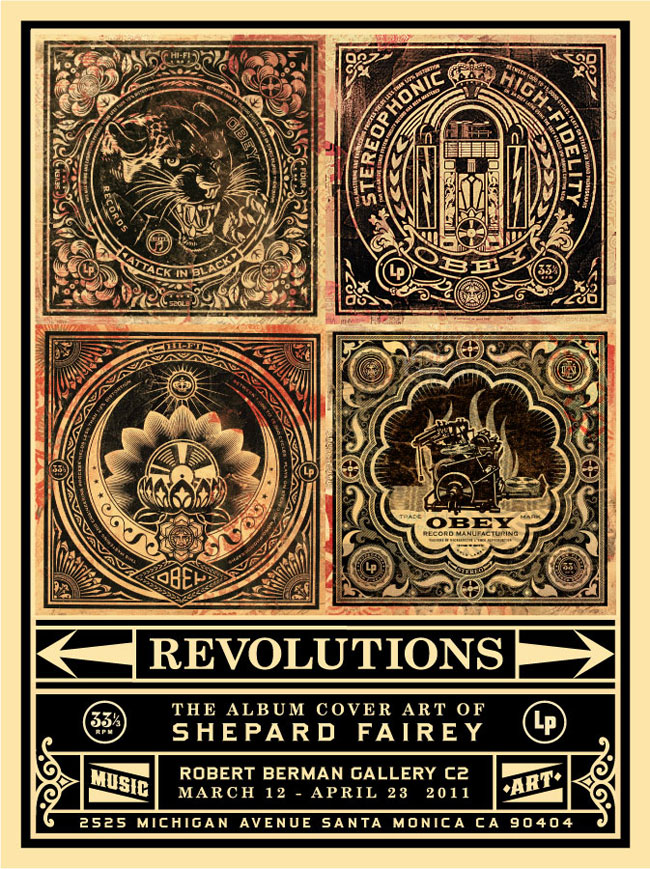 Shepard Fairey (featured) will be putting on a show on March 12th at the Robert Berman Gallery featuring some of his most beloved imagery – his album cover art. Entitled Revolutions, the body of work on display will feature over 80 pieces of punk, rock, new wave, jazz, and hip-hop inspired artwork based on the 12″ record cover format.  Also, two limited edition album cover print box sets will be released in conjunction with the exhibition.

“Long before I knew about art galleries or even street art, I was excited about album cover art, if only because it was the visual counterpart to the music on the records I loved.  Album covers conjured a euphoric association with the listening experience. Most of my earliest home-made tee shirts were stencils based on punk album covers. I’ve had some very moving encounters with art in my life, especially in the street, but almost nothing can compare with the first time I heard the boots marching and first chord of the Sex Pistols’ Holidays in the Sun, or the air raid sirens leading into “too black, too strong” on the intro to Public Enemy’s It Takes A Nation of Millions to Hold Us Back, or the opening guitar scream of Black Flag’s Rise Above. Those songs did, and still do, make my arm hairs stand up. Music is visceral and accessible, but also  has the additional powerful layers of the lyrics, with their content and politics, and the style,politics, and personalities of the musicians themselves. No matter how much I love art, or try to convince myself of its relevance in society, the fact remains that music is a lot cooler and way more able to reach people’s hearts and minds… but I’m a populist and I look at this way: I may not play an instrument, but I’m gonna rock it hard as nails anyway. With my art I try to capture the same energy and spirit that makes music so powerful and democratic. REVOLUTIONS is a celebration of all the great music and accompanying art that has inspired me over the years.”