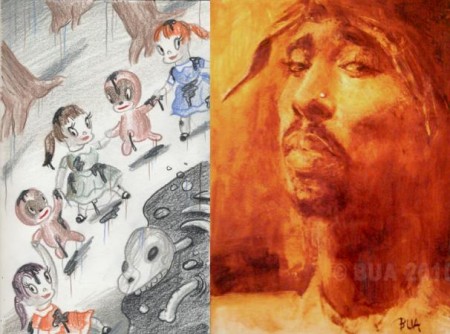 The LACMA (Los Angeles County Museum of Art) is stretching its horizons and holding two very cool free events this Saturday, June 12th. The first is Justin Bua’s “Urban Art Studio” where he will be be showcasing his historic hip hop based art and holding an afternoon of events with some interviews and performances with artists such as Camille Rose Garcia, Mear One, Mix Master Mike, Flea and The Wiggles.

On another front also sponsored by the LACMA, Gary Baseman’s (interviewed) will be presenting his latest project – “Giggle & Pop”. Following up on his awesome spectacle last year – “La Noche de la Fusion”, he returns with a fresh performance at the famous La Brea Tar Pits where his crazy characters such as Chou Chou’s and amazingly designed ladies errr… characters will be running wild engaging in choreographed artistic goodness. There will be three performances (12pm, 1pm & 3pm)

Check out a few peeks and a cool video of the Chou Chou’s in LA… after the jump.