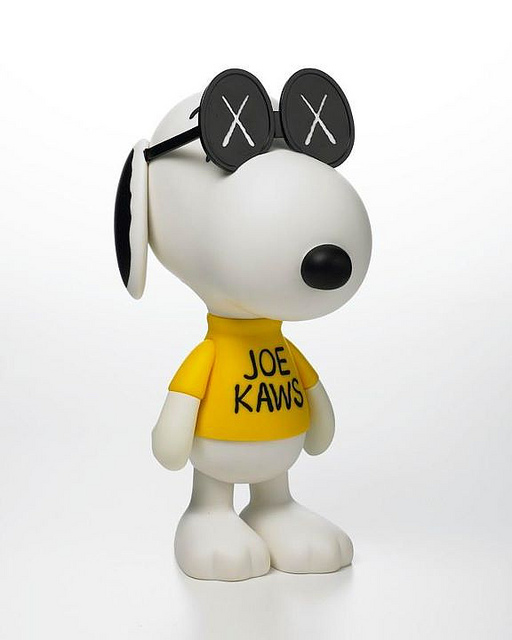 Since the Dissected Milo set was released back in February, KAWS hasn’t released anything on the vinyl toy front, undoubtedly due to focusing on his fine art and recent solo Hold the Line. That will all change next week with the release of his Peanuts homage to Snoopy, aptly dubbed Joe KAWS. The figure, who’s release was effectively set in stone over a year ago with the release of an OriginalFake x Peanuts Joe KAWS t-shirt collaboration to mark the 60th Anniversary of the Charles Schulz creation, continues his impressive list of high-profile collaborations with major media companies, including Pinocchio with Disney, Tweety with Warner Bros., Stormtrooper and Vader with Lucas Films.

Moreover, the project pays tribute to one of the Brooklyn-based artist’s earliest and most prolific graffiti pieces back in 1995. The bombing of that New Jersey Metlife billboard lead to a fascination with repurpsosing corporate advertising space, ultimately planting the preliminary seeds for his unique approach to street art and the disruption of phone booth and bus stop advertisements that would later become his trademark and paramount to his early success and underground fame. Now, over 15 years later, the once unsung street artist, now celebrated contemporary artist will release Joe KAWS next week at OriginalFake in Tokyo and online at KAWSONE, if nothing else as symbolic representation of a lifelong dream come true.

Check out the original Metlife billboard after the jump.