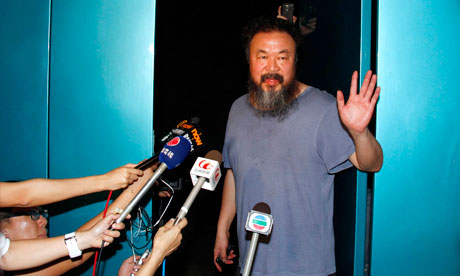 After being detained since April 3rd, the Chinese state news agency, Xinhau, today reported Ai Weiwei has finally been released on bail “because of his good attitude in confessing his crimes.” China’s most well known artist and activist, who has long been an outspoken critic of domestic humanitarian policies and effectively foreshadowed his own dire fate in his last blog entry before it was taken down the government, spent almost three months – 81 days – behind closed doors on alleged “economic charges”, though one can’t help but think his anti-nationalistic sentiments contributed to the whole situation.

The full circumstances regarding his release aren’t yet clear. But it does seem apparent the unanimous show of support from the global art community, with exhibitions in New York (covered) and London (covered) during his detention, only served to galvanize the protest and helped to bring major media attention to the situation. While “a chronic disease he suffers from” was also cited as a reason for release, Ai appears in good physical health. What hasn’t remained, at least for the time, is the artist’s vocal disposition, as Ai stayed extremely guarded when responding to questions about the release and the “evaded taxes” police said he’s now “willing to pay”. Arguably, this could have been the sole mission of the possibly unjust charade; to prevent the vocal activist, along with the 100+ other dissidents detained in this most recent crackdown, from speaking their mind with archaic fear tactics and the threat of torture. That aside, it is a good day for all art lovers and freedom loving people the world over. And most importantly, Ai himself has made clear, he’s “very happy to be free and very happy to be back with my family”.