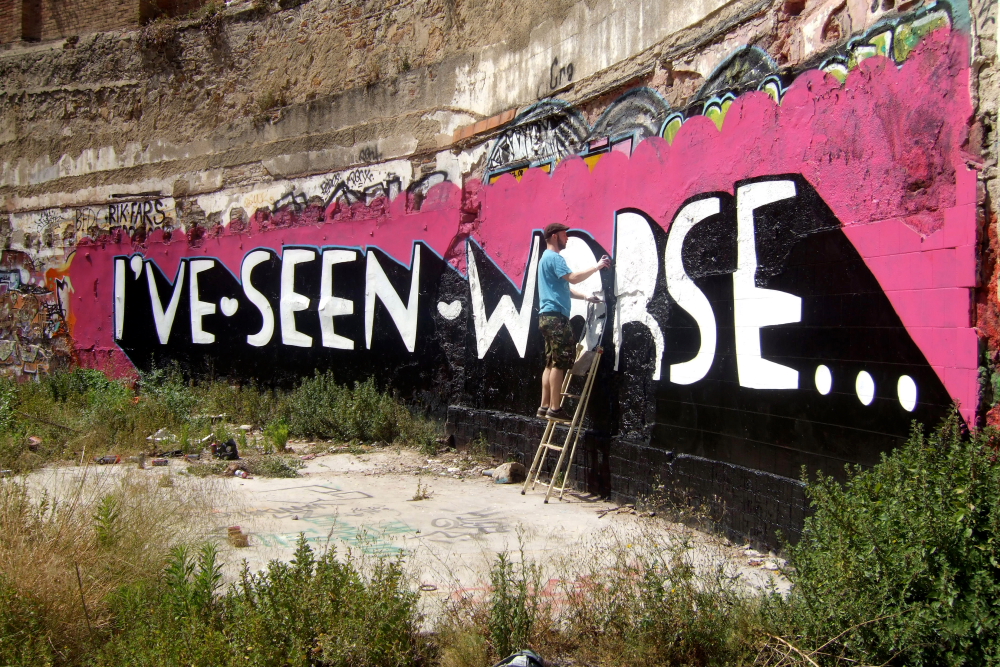 South Yorks represent! Kid Acne’s solo exhibition Kill Your Darlings launches this Friday 22nd July at Museums-Sheffield’s Millenium Gallery. A long time resident of Sheffield, this is surprisingly Kid Acne’s first solo exhibit in the city, and follows a pair of solo exhibitions in London at Concrete Hermit and Stolenspace over the last year.

The intriguing title alludes to a motto first coined by William Faulkner, and used by writers to describe the action of cutting the most cherished characters and scenes from their story. Kill Your Darlings is set to run for 3 months and will feature a new work and installations as well as being partly a retrospective of KA’s career to date. We’re also quite excited to see the full version of the live action Stabby Women film directed by Dscreet. You can catch the trailer of it here.

AM put a few questions to Kid Acne to find out a little more about him and what he has in store for the exhibition. Read on for the interview after the jump. 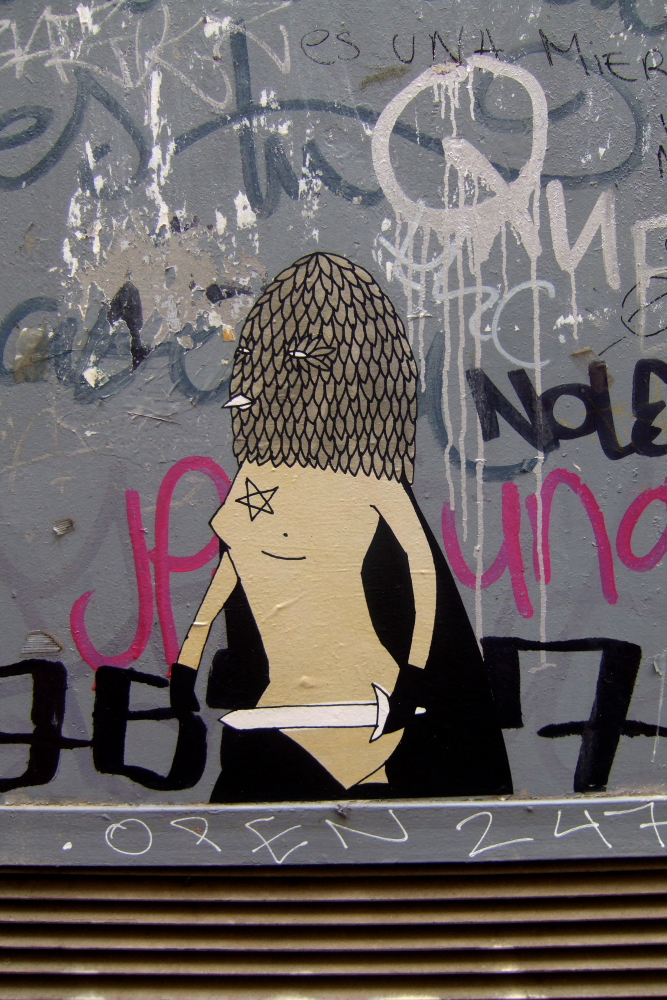 Arrested Motion (AM): As Kid Acne, you have a varied output for your creative work – recording, commercial illustration, design projects, graffiti and fine art. How do you manage to balance all of these activities and remain sane?

Kid Acne (KA): For me, it’s all part of the same thing. When I began painting graffiti I wasn’t interested in only graffiti. I was also discovering the world of DIY fanzines, which was equally appealing. From there I learnt about screen printing and making comic books. Through early rave and jungle, I discovered old school hip-hop samples and from there we’d go digging for breaks, which lead to picking up super 8 cameras at car boot fares and making short films. There’s no set plan, just happy accidents and moments of intrigue. I’ve never really understood people who are only into one thing, the only problem I guess is the quality control as I don’t always put 100% into what I do.

AM: You seem to have traveled a lot in the past. What is it that drew you to, and now keeps you in Sheffield?

KA: I moved to Sheffield to study Fine Art in the late 90’s. I never really planned to stay, but I never found a reason to leave either. After Uni, I signed on the dole for a couple of years and we set up a recording studio in our old flat. We recorded a bunch of albums and bit by bit people started seeing my artwork too. This lead to various invitations to paint, exhibit, DJ or play live in different cities and different countries. Without the offers, I doubt I would have traveled, but I’d say traveling is probably the best thing to have come out of what I do. I feel very fortunate to have visited all these places and to have met all these great people. 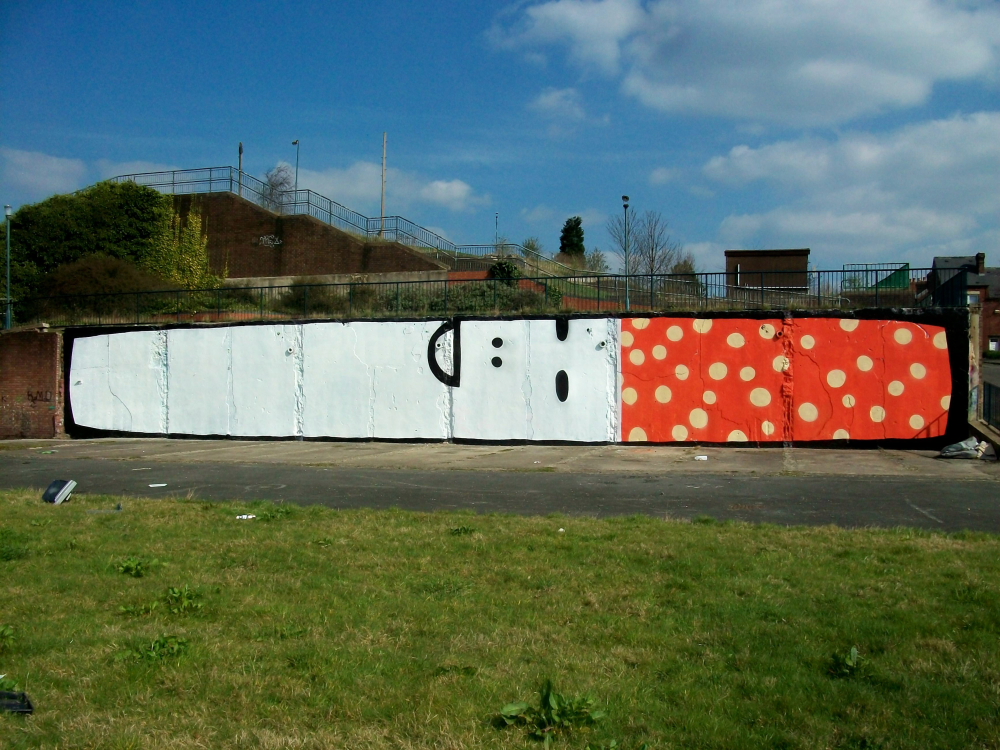 AM: I’ve assumed that your recent art fag pieces are a direct response to what some graff writers may think of you and some of your peers, in terms of your combination of outdoor and gallery activities. Would that be correct, or is it a commentary on the wider graff scene? I guess a little self depreciating humour is a wonderful and typically Northern trait to possess…

KA: I just liked the idea of presenting an alternative version of the term. It gets banded about too much these days, which has become as boring and lazy as half the artwork they’re criticising, which in the begging I did actually agree with on the most part. My art fags have more to do with the similarities between graffiti and smoking – as in both past times are appealing to teenagers because they’re ‘rebellious’ and ‘cool’, yet they become a compulsion and can lead to serious problems in adult life if you don’t kick the habit. I was also spending a lot of time in Paris, where it seems everyone smokes. In short, there were a few reasons behind this series.

AM: Can you explain where you find the inspiration for the words of your mural and slogan pieces? Is it all spur of the moment / location specific, or do you have a storeroom full of catchy slogans you’re waiting to bust out?

KA: At a time when I was making more music than artwork, I was writing ideas for lyrics and song titles in the back of my sketchbooks more than I was drawing pictures in the front of them. After a while, I decided to paint some of these as an escape from doing the music. I have a whole list of them and plan to paint more before documenting them in a fanzine. I’d like to paint them regionally and internationally in different dialects and languages. 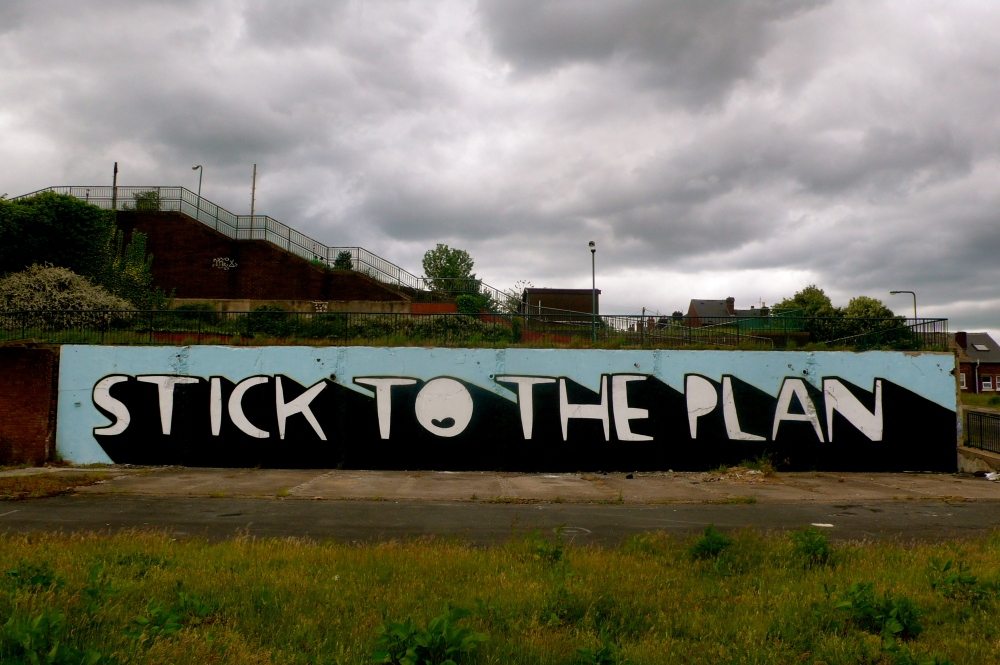 AM: I’m interested to hear what the meaning behind the ‘Stick To The Plan’ piece in Sheffield was? I loved that one as it seemingly reveals your thought process when planning the wall.

KA: I first painted that spot back in 2002 when it was a blank wall and the housing estate was still standing. I’d always planned to take it out end-to-end with a blockbuster but had never gotten round to it. Eventually I did, so it seemed appropriate to write STICK TO THE PLAN. Since then, and because the wall can be seen from the other side of the city it’s attracted attention and more people go up there to paint now.

AM: Do you have an all time favourite mural you’ve made?

KA: It’s difficult to say because more often than not, the memory of doing the piece doesn’t relate to the quality of the painting, so I have favourites for different reasons.

AM: And what about the characters and motifs you use in your artwork… Is there a favourite something that defines Kid Acne in your eyes?

KA: One of my favourite characters is the one I painted on Grimsby St, East London in 2006. It’s nothing special and wasn’t planned, but for some reason it had all the personality and charm I wanted it too. I stopped painting characters for a while after that because I thought “I finally got it” and didn’t want to jinx it. 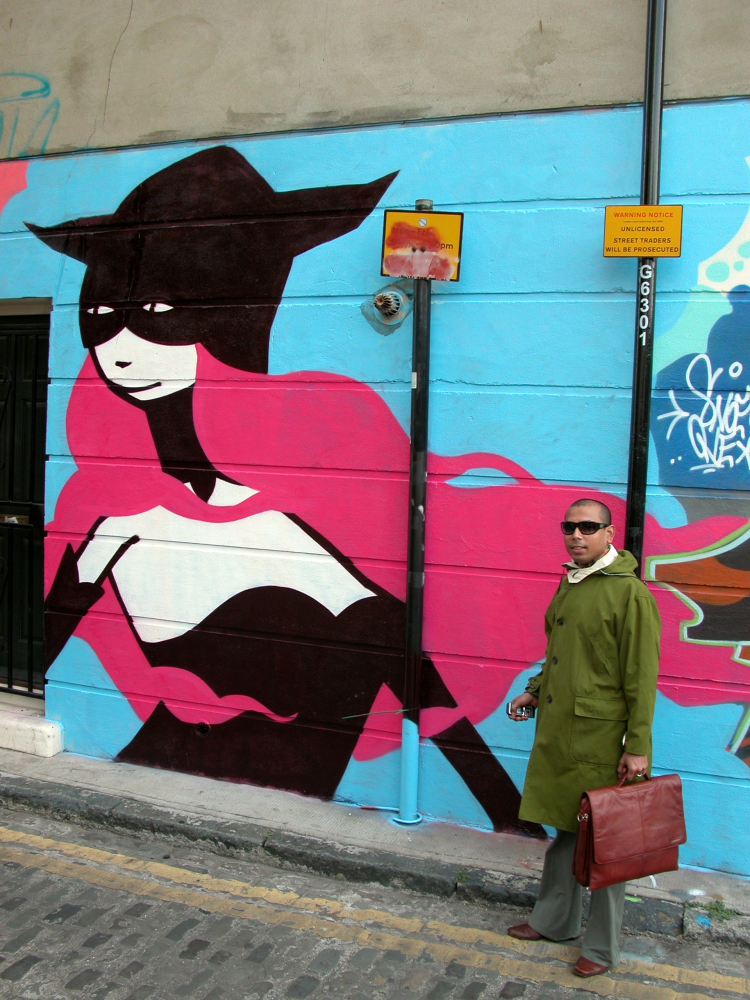 AM: Given the choice, would you rather paint a blank canvas or a blank wall?

KA: A wall. It doesn’t even have to be blank.

AM: You’ve been using a sinuous hair motif over the last few months, both outdoors and in. Where does this come from / what does it represent?

KA: It’s the hair pattern, which derives from my girl characters. I’ve always liked painting big and simple stuff and I guess it’s part of the process of refining and exploring what you do. I used to paint characters from the waist upwards, then I started painting just the head and shoulders, but a lot bigger. I began putting detail in the hair to compensate for the simplicity of the facial features. After a while, I realised I enjoyed painting the hair most, so I dropped the character and kept the pattern. It’s a similar process with the slogans and the art fags – just a case of stripping out any unwanted information. 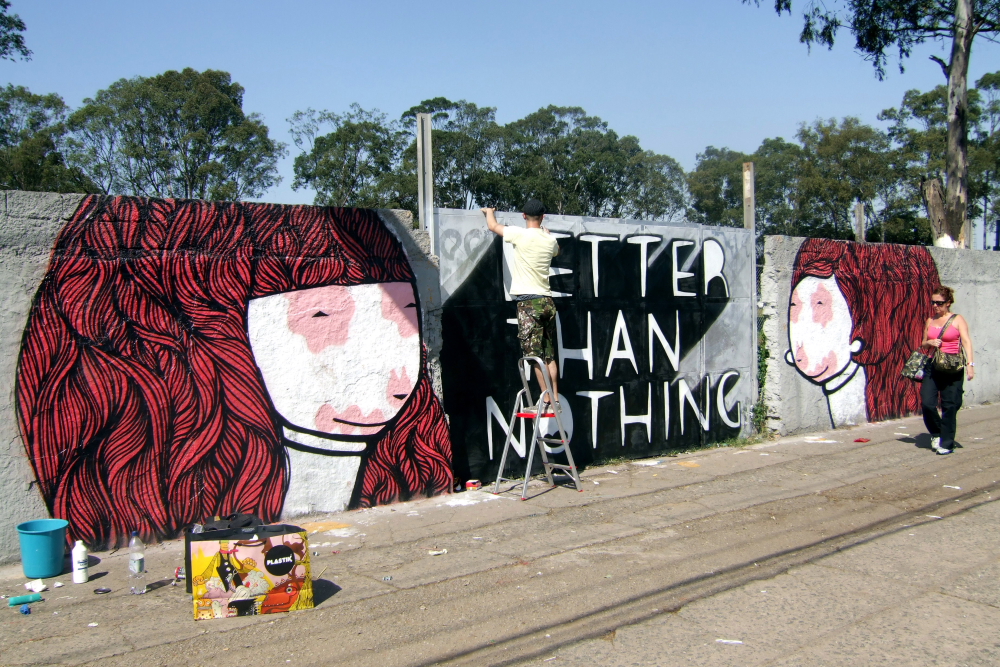 AM: You’ve long been a supporter of DIY culture. Your Invisible Spies record label and the zines / books you’ve self published are testament to your DIY attitude. How does it feel to be on the verge of opening a solo exhibition in the public realm of Sheffield Museum?

KA: Well, it couldn’t be more mainstream I guess, but I’m very happy to be doing a show with them. They contacted me towards the end of last year to offer me a show, so of course I said yes. My exhibition is being held in the same space Designers Republic had their retrospective, so that’s good enough for me. I’ve always had a DIY approach to my work, but I equally have no problem in working with bigger companies or institutions. In my experience, it’s less paperwork than applying for funding and they generally leave you to do whatever you want. It’s the smaller businesses and acquaintances that try and rip you off or get you to adapt your work to suit their plans. 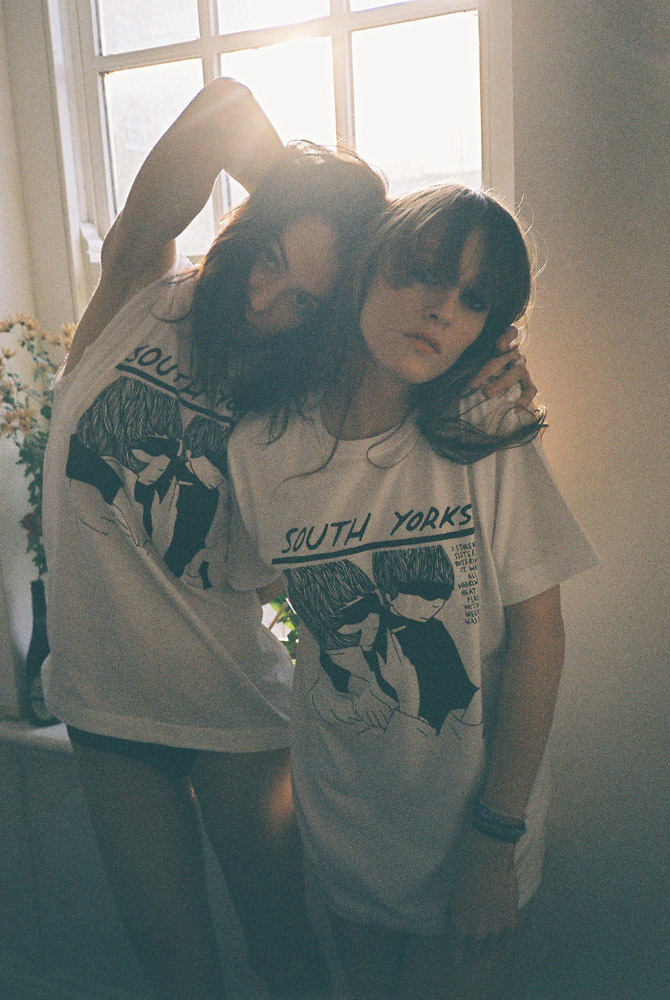 AM: I’ve long enjoyed that South Yorks riff that you did on Sonic Youth’s Goo cover art originally by Pettibon. Where was the greater source of inspiration from with that piece? The Youth or the Pettibon?

KA: It’s a loving homage to both. Again, it’s about word play. It’s my version of those old rave T-shirts you used to get, which said Nice Tripsies instead of Rice Crispies or Fairly Hip Kid instead of Fairy Liquid. I love the Pettibon original and even traced it back to the photo of Myra Hindley’s sister leaving court and the Roy Lichenstein stuff, which seems to have inspired him.

AM: On the subject of South Yorks, as your exhibition Kill Your Darlings is your first Sheffield solo, are you planning any locally themed pieces that Sheffield types will particularly resonate with?

KA: Nope. I’m keeping it strictly universal. I do have a small collection of Sheffield themed artwork I’ve done over the years, but I think everyone in the city has already seen them. 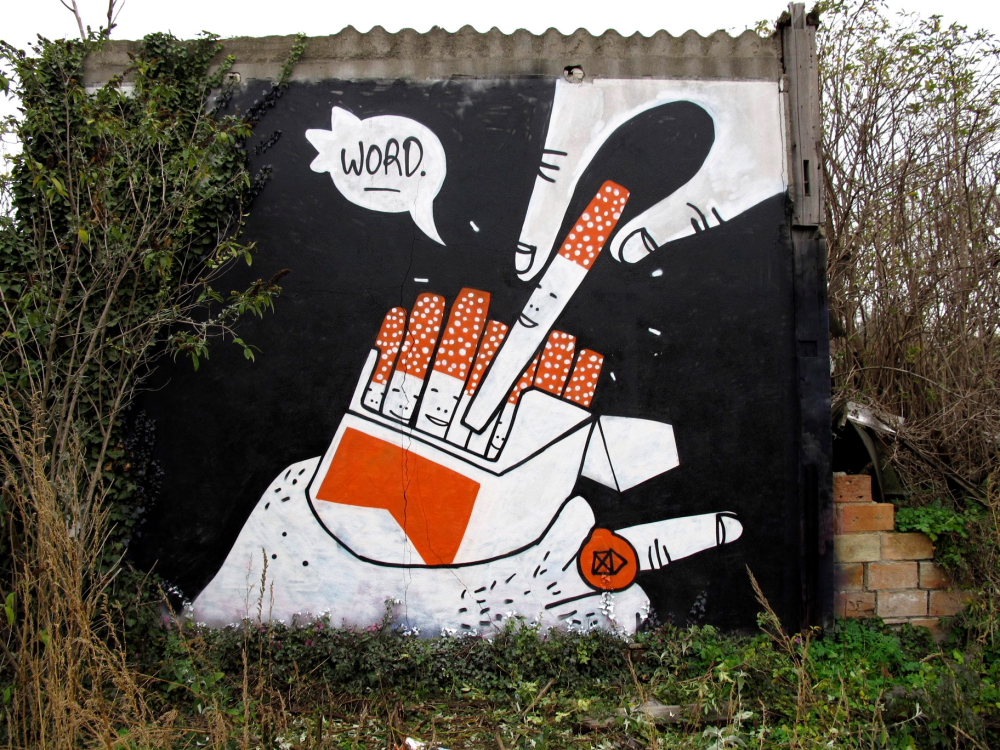 AM: Kill Your Darlings is an adage used by writers whereby they cut the parts of a work that are great in themselves but which unbalance the work as a whole. Does this mean that we should expect a perfectly balanced exhibition, or is it a literal edit of some of your more familiar characters and motifs?

KA: I’m using it as a way of drawing a line under some of the things I’ve done in the past. Things I am very proud of, but it’s an opportunity for me to look backwards in order to move forwards. A purge if you will. I’m interested in doing larger installations, sculptures and film work, which are all at very embryonic stages at the moment. I doubt I’ll ever do a perfectly balanced exhibition, it will always be an ongoing body of work.

AM: Can you tell us more about any of the work or the themes you are exploring with this show?

KA: It’s part retrospective, part installation. One half is a combination of ideas and themes I’ve been exploring over the past couple of years and the other half includes drawings, sketchbooks, record sleeves, illustrations, prints and photos from the past 10 or 15 years. It’s a real mix, without it looking like a dog’s dinner I hope. 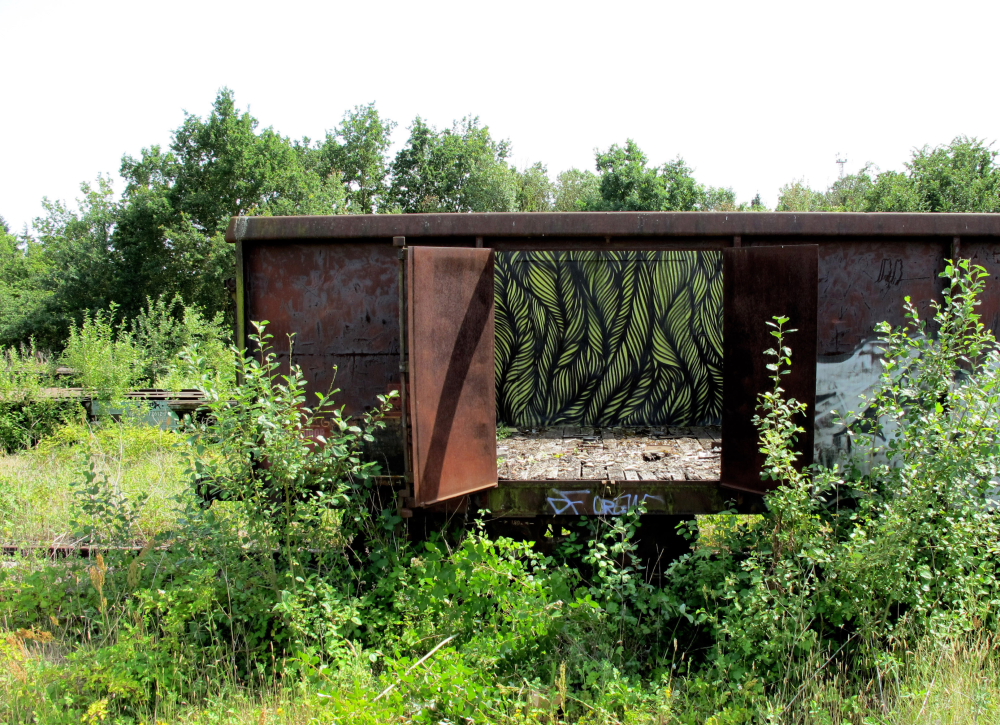 AM: Finally, I read that you followed the path of an artist after you appeared with another music / art pioneer – Mr Rolf Harris – on his TV show Rolf’s Cartoon Club, which was like a more unruly version of Take Hart. Rolf was crazy in comparison to the conservative Tony Hart. Did you get to wobble Rolf’s wobble board? Do you have a picture or video of you on the show?

KA: There’s a VHS copy kicking about somewhere but no wobble board involved I have to say. I did some stop-frame animation and was on the show for 30 seconds. I was so excited about it, but it really was an eye opener into the world of Television and was a truly underwhelming experience. This may be why I got into graffiti and taking drugs later the same year. I was disillusioned with the world, thanks to Rolf and ITV.

AM: Thanks for your time Ackers. Good luck with the show – we’ll see you at the opening.

KA: Thanks Boss. See you there. 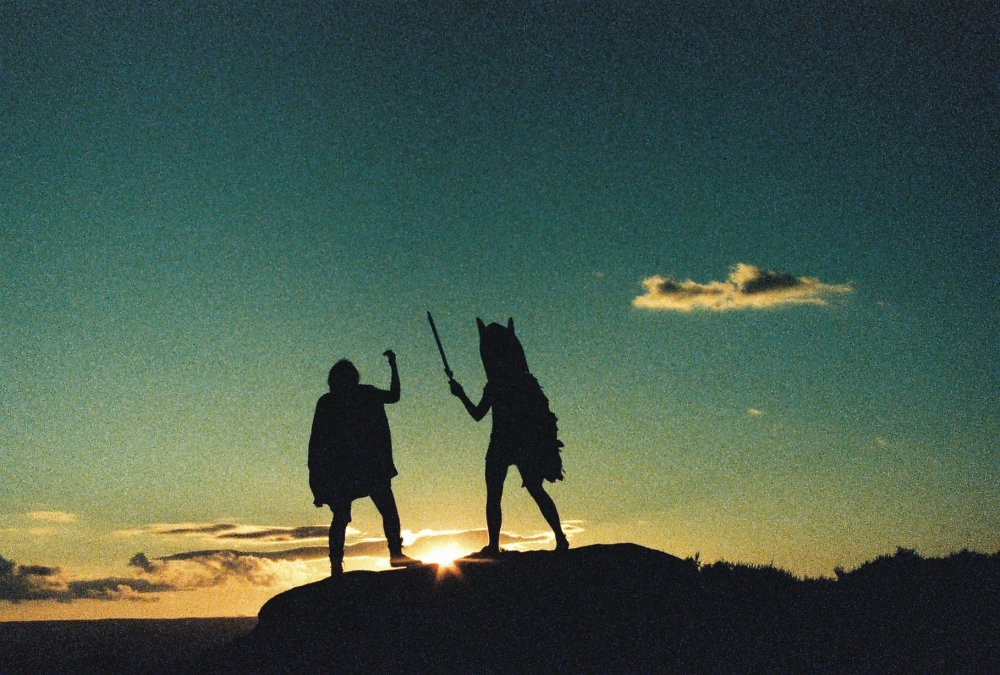 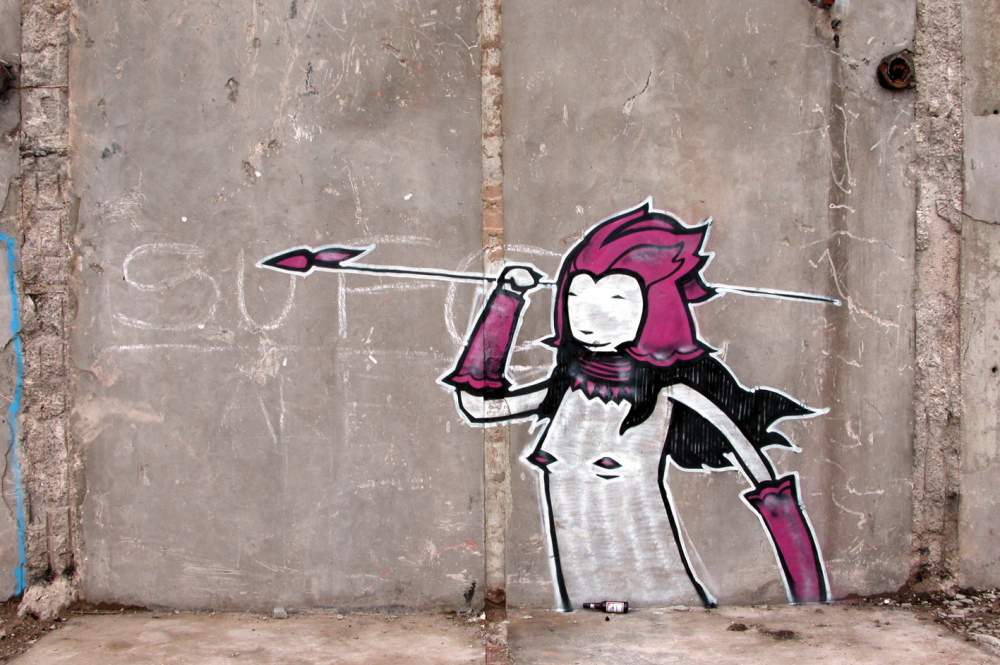 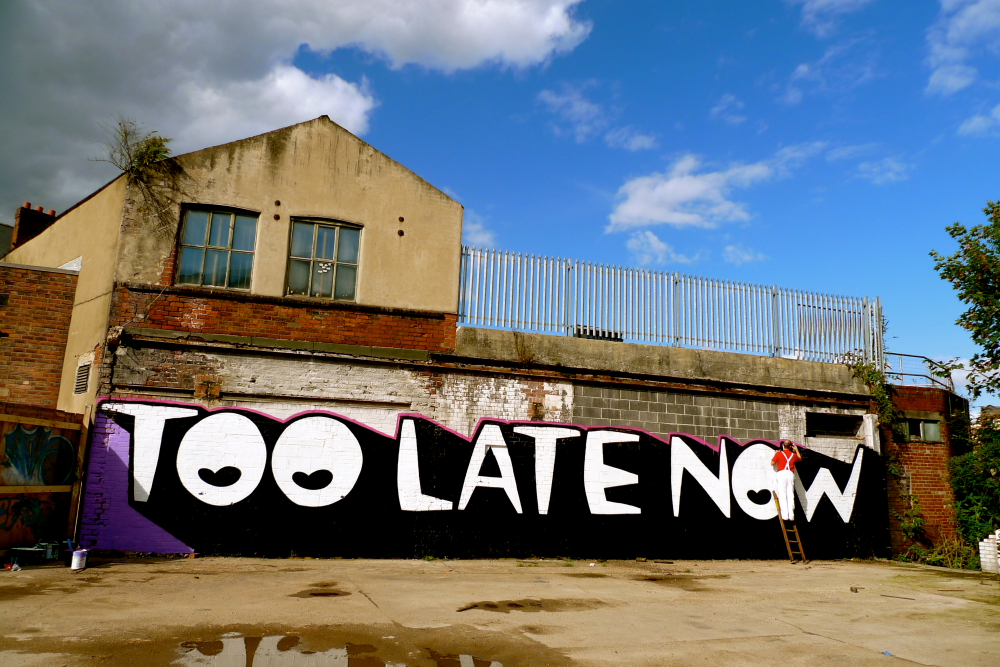 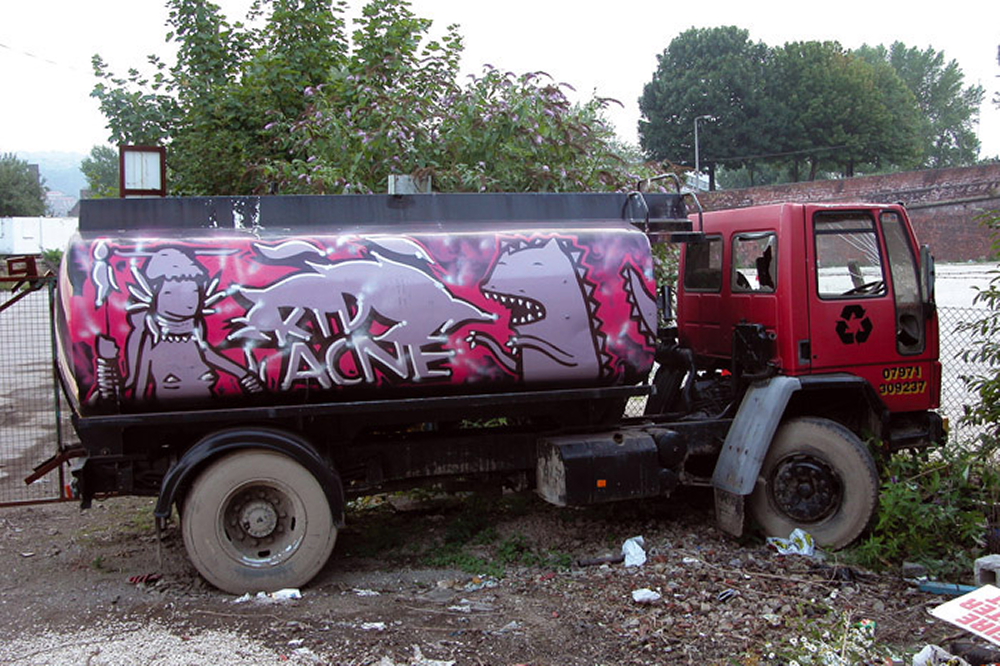 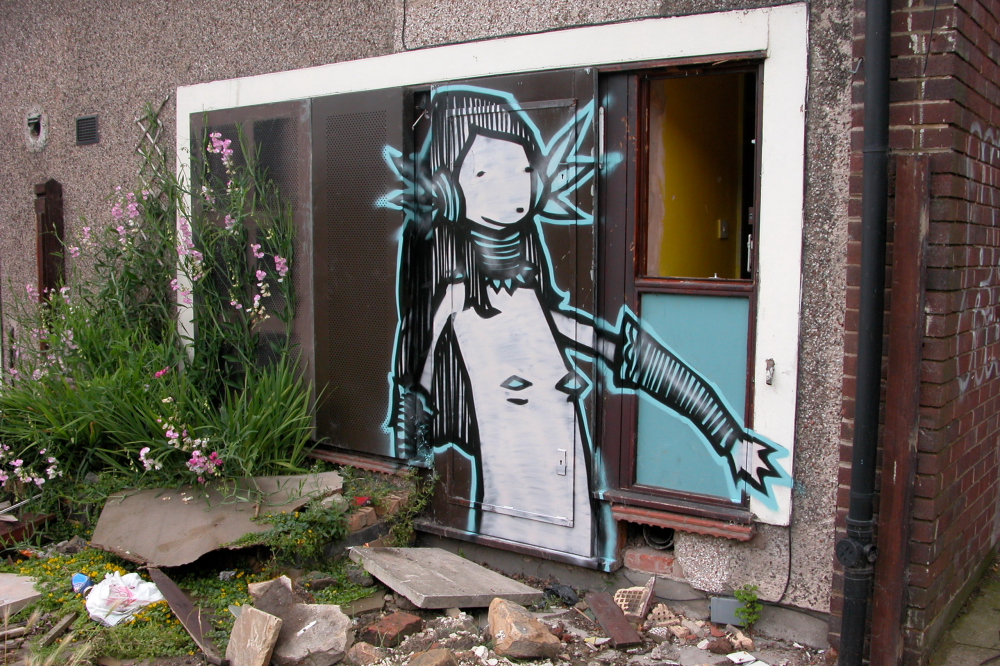 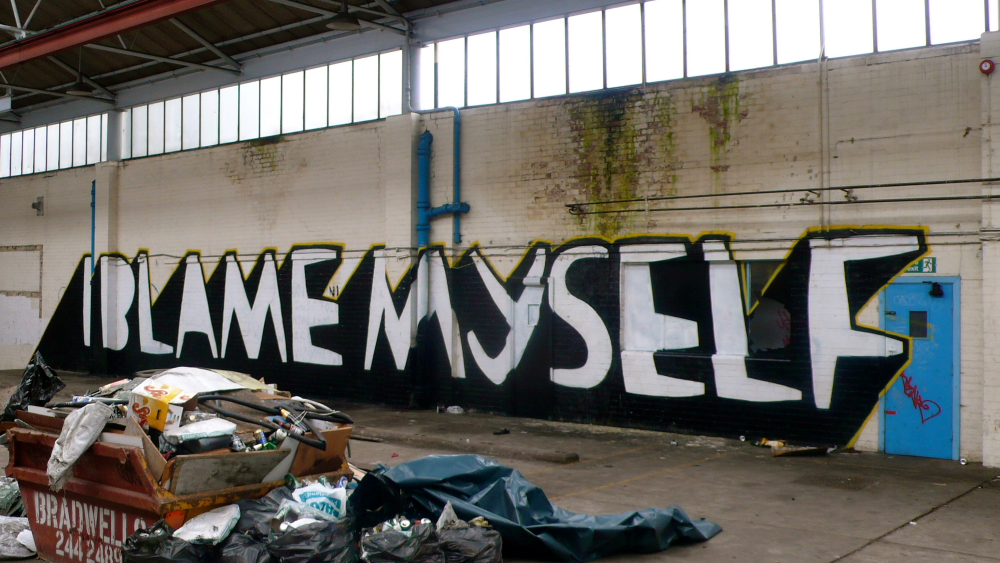 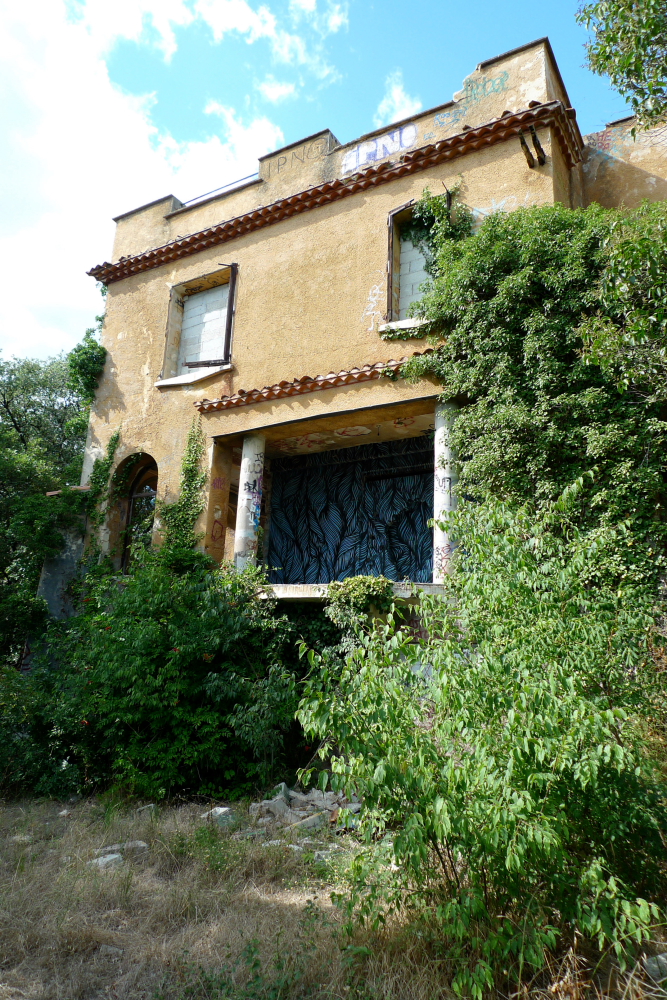 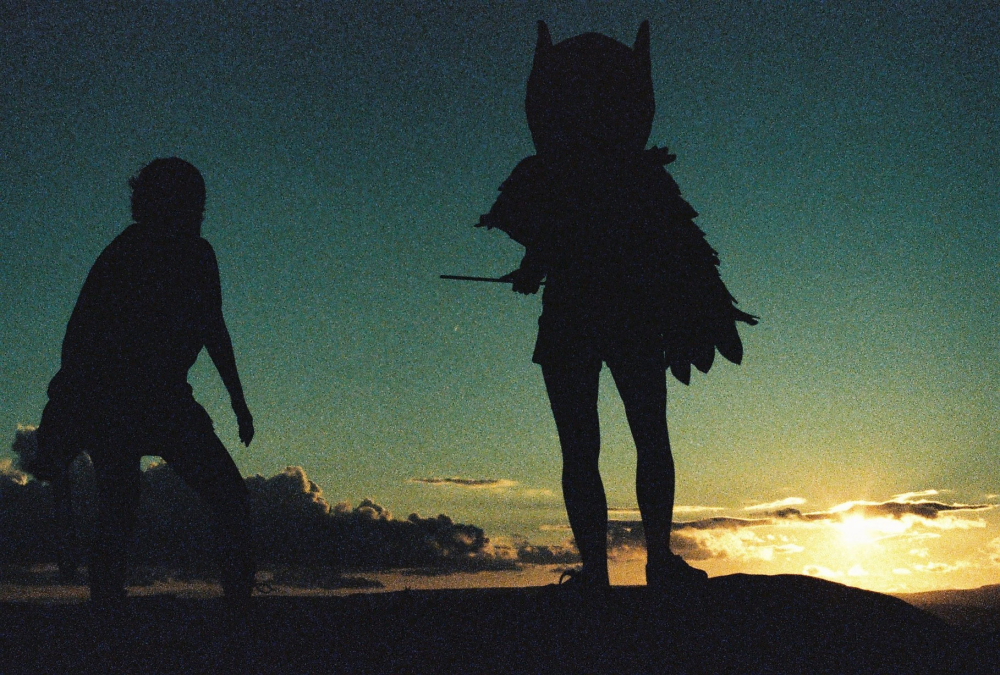