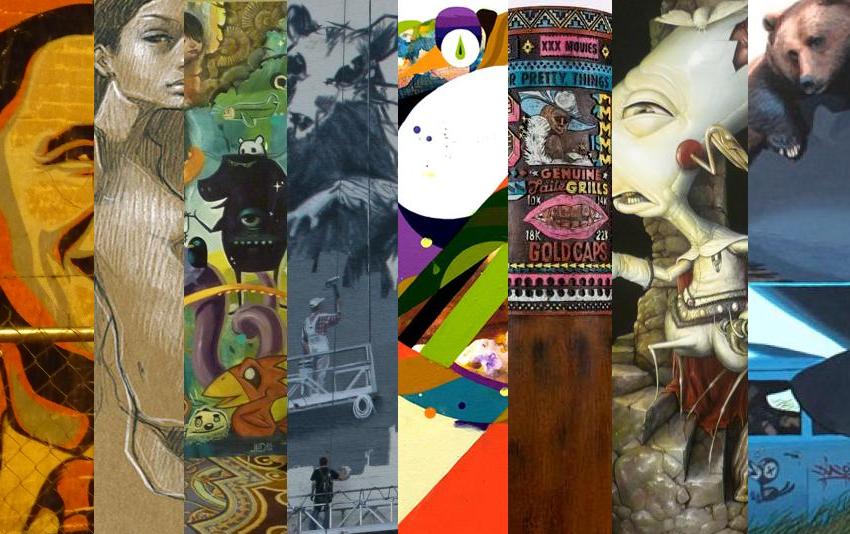 It has been a wonderful few months for us since AM launched in September, so we would like to take this opportunity to wish everyone a happy Thanksgiving and thank our readers for your continued support.

We’ve covered so much great art in our first few months, we thought that it might be a good time to recap some of our favorite stories so far. From Audrey Kawasaki to Kaws, Shepard Fairey to Baby Tattooville, Mark Ryden to Josh Keyes, Takashi Murakami to Greg Simkins, Banksy to Yoskay Yamamoto, the list of artists that have made our headlines continue to grow. Each of us at AM has picked three notable articles/topics of which we thought you would enjoy a “second helping”.Â  (Going forward, AM will be serving “second helpings” of the juiciest stories every month!)

We hope you saved room for seconds…Â  after the jump. 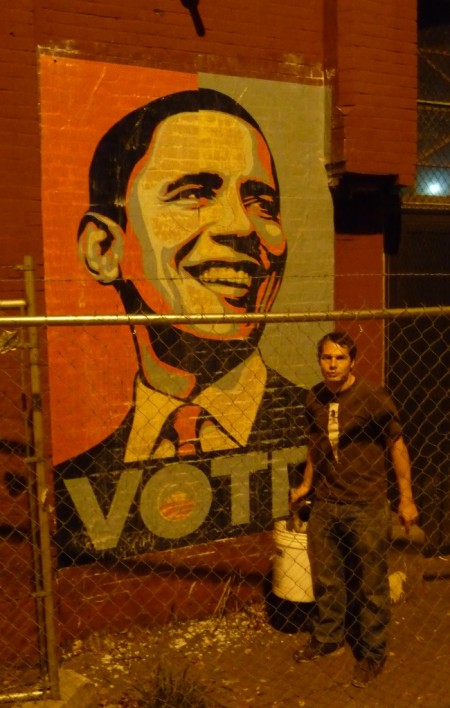 How fitting thatÂ the man who jump started a generation of voters in 2008,Â capped off the year with a visit to the nation’s capital on the eve of the presidential election. With the Obama campaign all but in the bag, Shepard pressed forward and invited AM along for what he called an “urban beautification” project for D.C. From premiering his finalÂ official ObamaÂ campaign image: Vote,Â guest speaking at the CorcoranÂ Museum to the opening reception ofÂ his show at the Irvine Contemporary… and somehow finding the energy to stay up to the early hours of the morningÂ wheat-pastingÂ most of Washington DC; Shepard Fairey gives the readers a taste of why he’s one of the most prolific street artists in the world.

With the majority of attention focused on urban artists from the UK, Faile crossed the pond to remind the world that the urban art scene is alive and well in the United States.Â Â FaileÂ transformed a little school house in the UK intoÂ a grand display for their tremendous canvases, newly created Prayer Wheels, and Circular Palettes. 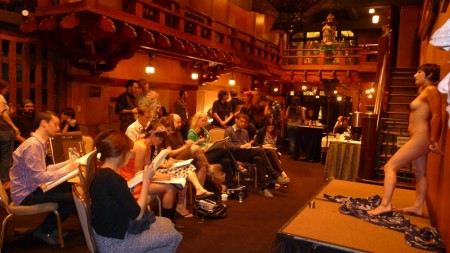 How often do you get toÂ spend the weekend with some of your favorite artists and thenÂ watch them work on something which you’ll get to takeÂ home?Â It’s a unique experience toÂ hang out with over 15 artists, go to Jeff Soto’s studio before his major show at Riverside Art Museum, and even sit down next to your favorite artists to do aÂ live sketch.Â Through the magic of on-site blogging, we were able to bringÂ the readersÂ all the action straight fromÂ theÂ retreat.Â Â With the announcement of Travis Louie, Audrey Kawasaki, Liz Mcgrath,Â and KMNDZ already confirmed, this awesome event will only get bigger next year. 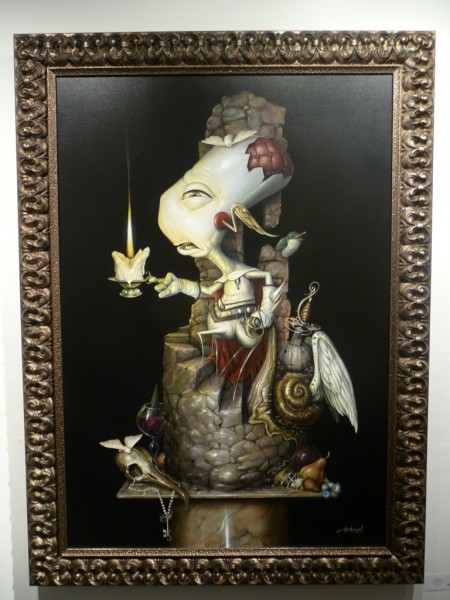 Greg Simkins didn’t disappoint with the second part of his “It Wanders” bicoastal show. I was especially impressed with his large “Knight Watch” piece and the large piece with his Winter character in it.Â  He has taken his detailed work up another level this year (something that is amazing considering how detailed his work is already). 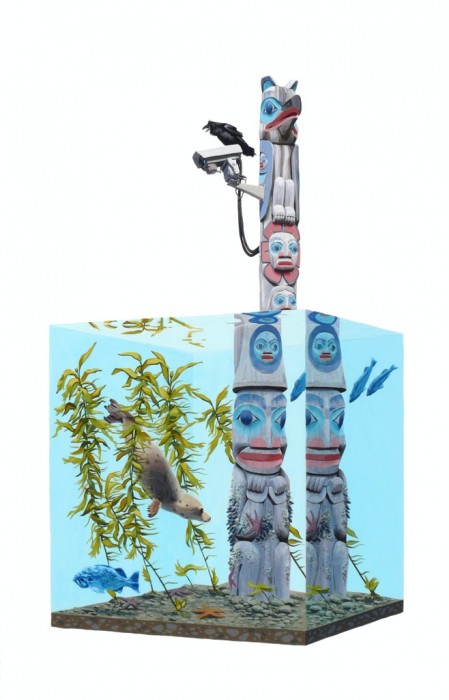 This was definitely one of those rare shows where I would be happy to own any of the pieces. Josh definitely stepped it up and produced many memorable and moving pieces utilizing many of his most loved elements – water refraction, graffiti, animals, and urban elements. 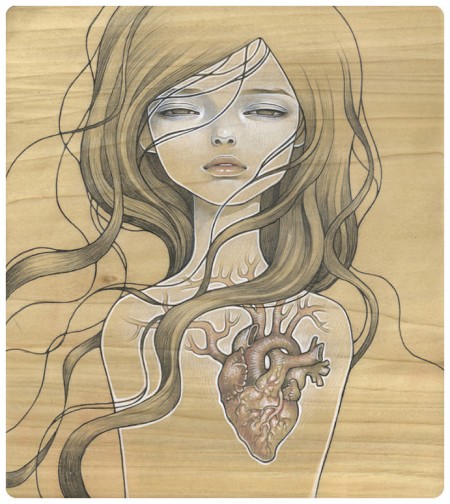 To be able to see any Audrey Kawasaki show in person is usually a pretty rare and amazing event. In this case, it was even more impressive because I did not expect her to produce so many pieces. Billed as a drawing show curated by Audrey, I only expected a few pieces from her – not 13 pieces! Also, I consider the “Smitten” show at Thinkspace kinda as the show in which I really started seriously collecting so to see a collaboration piece between two of my favorite artists from that show – Audrey Kawasaki & Stella Im Hultberg was really a surprise and a pleasure. 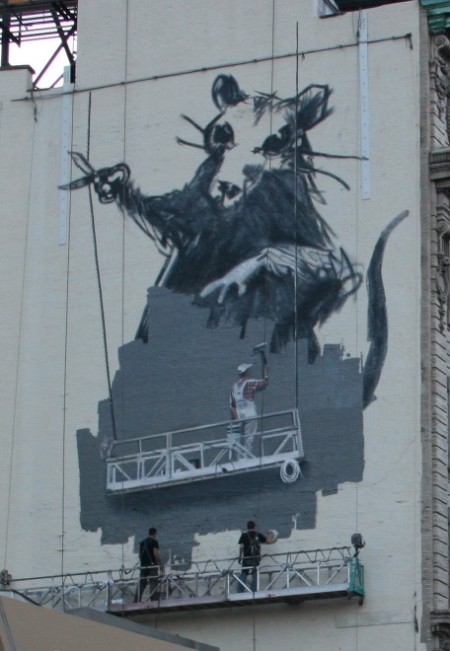 With rat murals popping up around downtown, everyone had their eyes open and ears to the ground trying to figure out what the mysterious street art superstar had up his sleeves for the Big Apple. And right when the rumor mill started to slow down, Banksy caught the City That Never Sleeps napping by dropping his Village Pet Store and Charcoal Grill. The installation walked that fine line between clever and stupid, by making animatronic chicken nuggets into a poignant discourse on how humans relate to animals in the modern world. 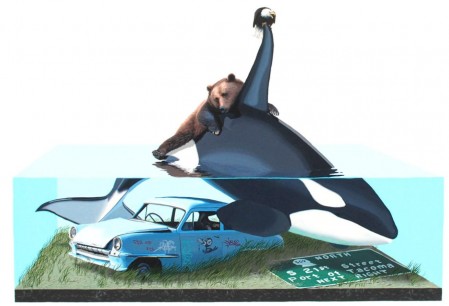 There was no doubt that Josh Keyes would deliver with his second solo show of ’08, but a quick glance at the preview images received from OKOK was enough to convince that this group of work was something special. With his new Totem and Guardian series, Keyes truly imbued each piece with the culture, history and spirit of the Pacific Northwest. 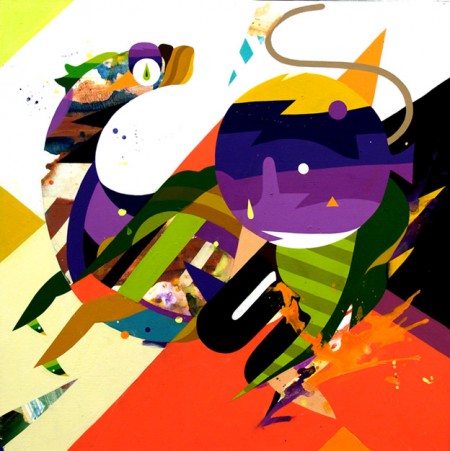 It was a real honor to be invited into Matzu’s studio to talk with him and see his current work. His new paintings on canvas and paper showed a talented artist developing into a distinct presence on the contemporary scene. And in the interview, Matzu expressed a strong basis in art theory and history that elucidated the complexity and depth of his art. With Matzu soon showing at Scope Miami and in a solo show at Joshua Liner Gallery, he is certainly an artist AM will keep an eye on.